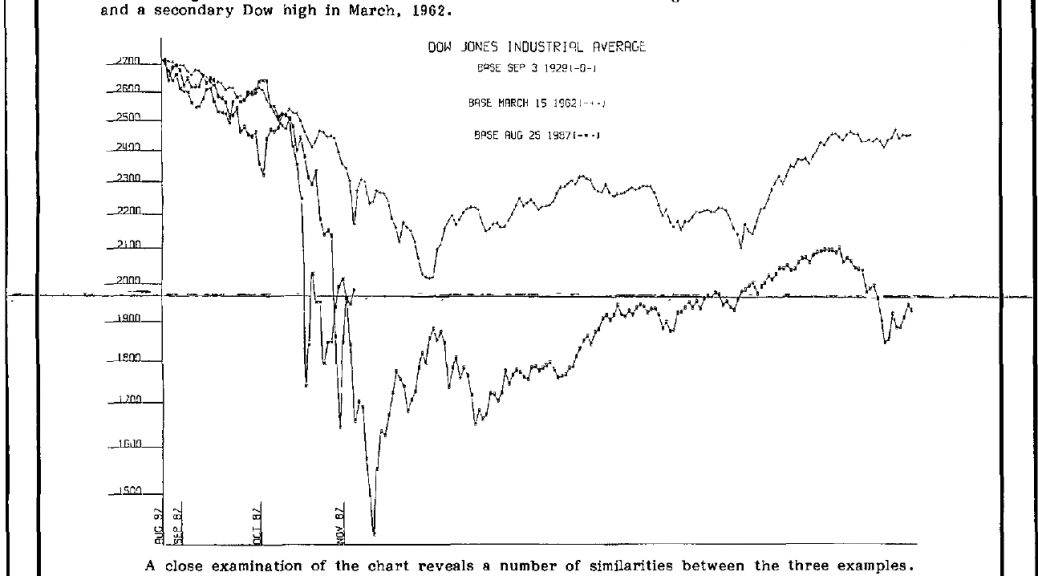 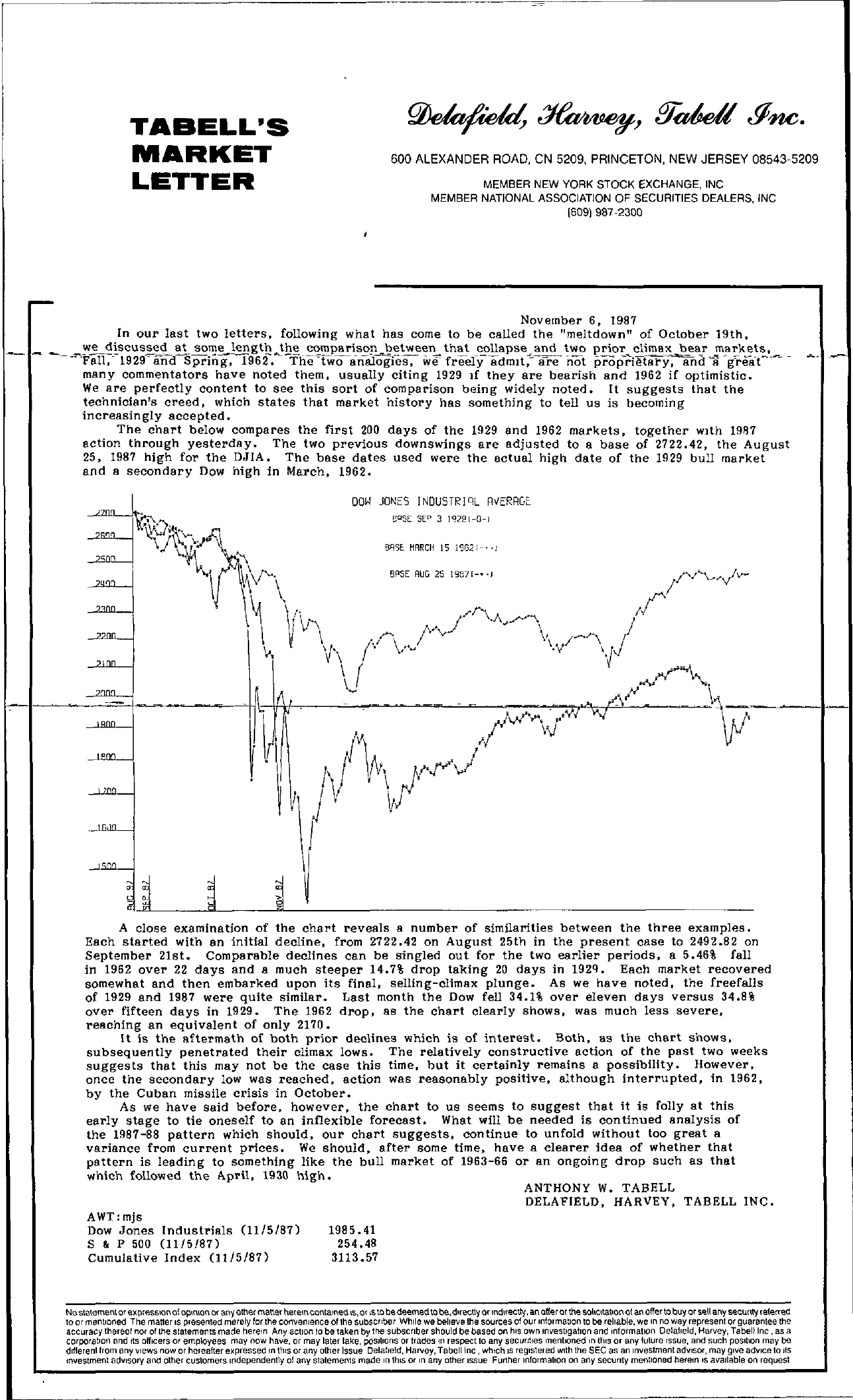 TABELL'S MARKET LETTER 600 ALEXANDER ROAD, CN 5209, PRINCETON, NEW JERSEY 08543-5209 MEMBER NEW YORK STOCK EXCHANGE, INC MEMBER NATIONAL ASSOCIATION OF SECURITIES DEALERS, INC 1609) 987 -2300 – November 6, 1987 In our last two letters, following what has come to be called the meltdownll of October 19th, anaJc;gfes. we we discussed at some length the comparison between that collapse and two prior climax bear markets. and grea-C— —- -Fall, –1929an(fSpring,196f.'–Thetwo (reefy-admIt; are not prop-r-ietary-, Ii many commentators have noted them, usually citing 1929 If they are bearish and 1962 if optimistic. We are perfectly content to see this sort of comparison being widely noted. It suggests that the technician's creed, which states that market history has something to tell us is becoming increasingly accepted. The chart below compares the first 200 days of the 1929 and 1962 markets, together wlth 197 action through yesterday. The two previous downswings are adjusted to a base of 2722.42, the August 25, 1987 high for the DJIA. The base dates used were the actual high date of the 1929 bull market and a secondary Dow high in March, 1962. – 'i(;we'..vr.t.if i \0 I.,' \ ' \ DOW JOES INDUSTRIQL RvERRGE ;(15 S!' 3 1!2el-Q-J B1I5E. MRRCH 15 19G21–) ,,,., ;-l/V/ — – \\ \0 \(\1\\y\ (\/\,,,,,1../J'-\J\.,/.\Vl,//\vj/' – \j — . – a A close examination of the chart reveals a number of similarities between the three examples. Each started with an initial decline, from 2722.42 on August 25th in the present case to 2492.82 on September 21st. Comparable declines can be singled out for the two earlier periods, a 5.46 fall in 1962 over 22 days and a much steeper 14.7 drop taking 20 days in 192Q. Each market recovered somewhat and then embarked upon its final, selling-climax plunge. As we have noted. the free falls of 1929 and 1987 were quite similar. Last month the Dow fell 34.1 over eleven days versus 34.8 over fifteen days in 1929. The 1962 drop, as the chart clearly shows. was much less severe, reaching an equivalent of only 2170. It is the aftermath of both prior declines which is of interest. Both. as the chart shows. subsequently penetrated their climax lows. The relatively constructive action of the past two weeks suggests that this may not be the case this time. but it certainly remains a possibility. However, once the secondary low was reached. action was reasonably positive, although interrupted in 1962, by the Cuban missile crisis in October. As we have said before. however. the chart to us seems to suggest that it is folly at this early stage to tie oneself to an inflexible forecast. What will be needed is continued analysis of the 1987-88 pattern which should. our chart suggests, continue to unfold without too great a variance from current prices. We should, after some time, have a clearer idea of whether that pattern is leading to something like the bull market of 1963-66 or an ongoing drop such as that which followed the April, 1930 high. ANTHONY W. TAB ELL DELAfIELD, HARVEY, TABELL INC. AWTmjs Dow Jones Industrials 01/5187) 1985.41 S & P 500 (1115187) 254.48 Cumulative Index (11/5/87) 3113.57 No statement or expressIOn 01 op!mon or any other matter hereIn contaIned IS, or IS to be deemed to be, dIrectly or IndIrectly, an offer Of the sohCltatlon 01 an offer to buy or sell any secunty relerred to or mentioned The matter IS presented merely tor the COflvemence of Ihe subSCriber WhIle we beheve the sources of our informatIon to be rehable, we In no way represent or guarantee the accuracy thereof nor of the statements made herein Any action 10 be taken by the subSCriber should be based on hiS own Investigation and information Delalleld, Harvey, Tabel! Inc, as a corporation and tls officers or employees may now have, or may later take, poSitions or trades In respect to any securities menlloned In thiS or any future Issue, and such pOSl\lon may be drtferent from any views now or hereafter expressed tn thiS or any other Issue Delaheld, Harvey, Tabellinc , which is registered wtlh the SEC as an Investment adVisor, may give adVice to ItS Investment adVISOry and other customers Ifldependently of any statements made In thiS or In any other Issue Further information on any secUrity mentioned herein IS available on request