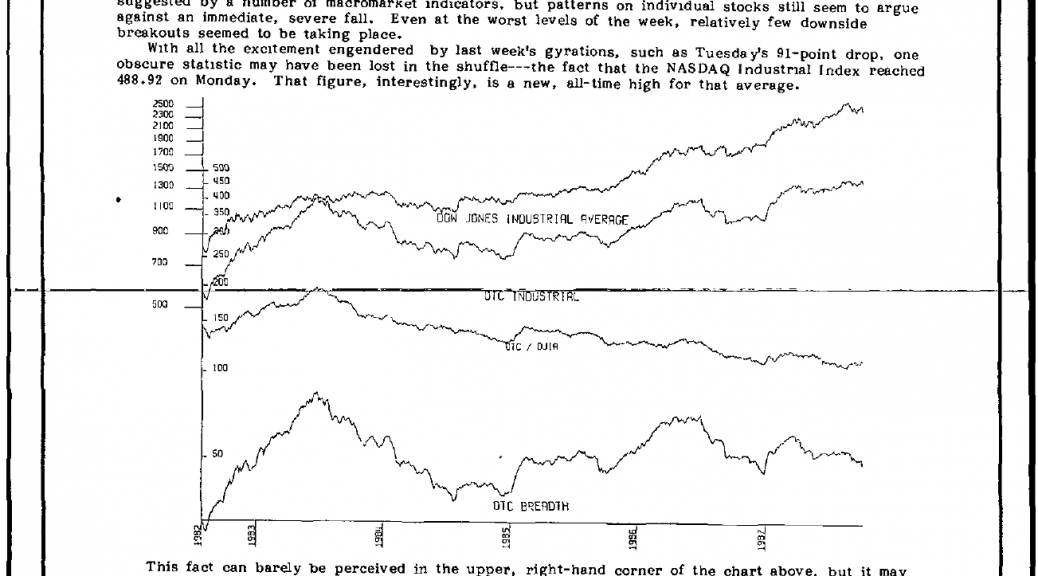 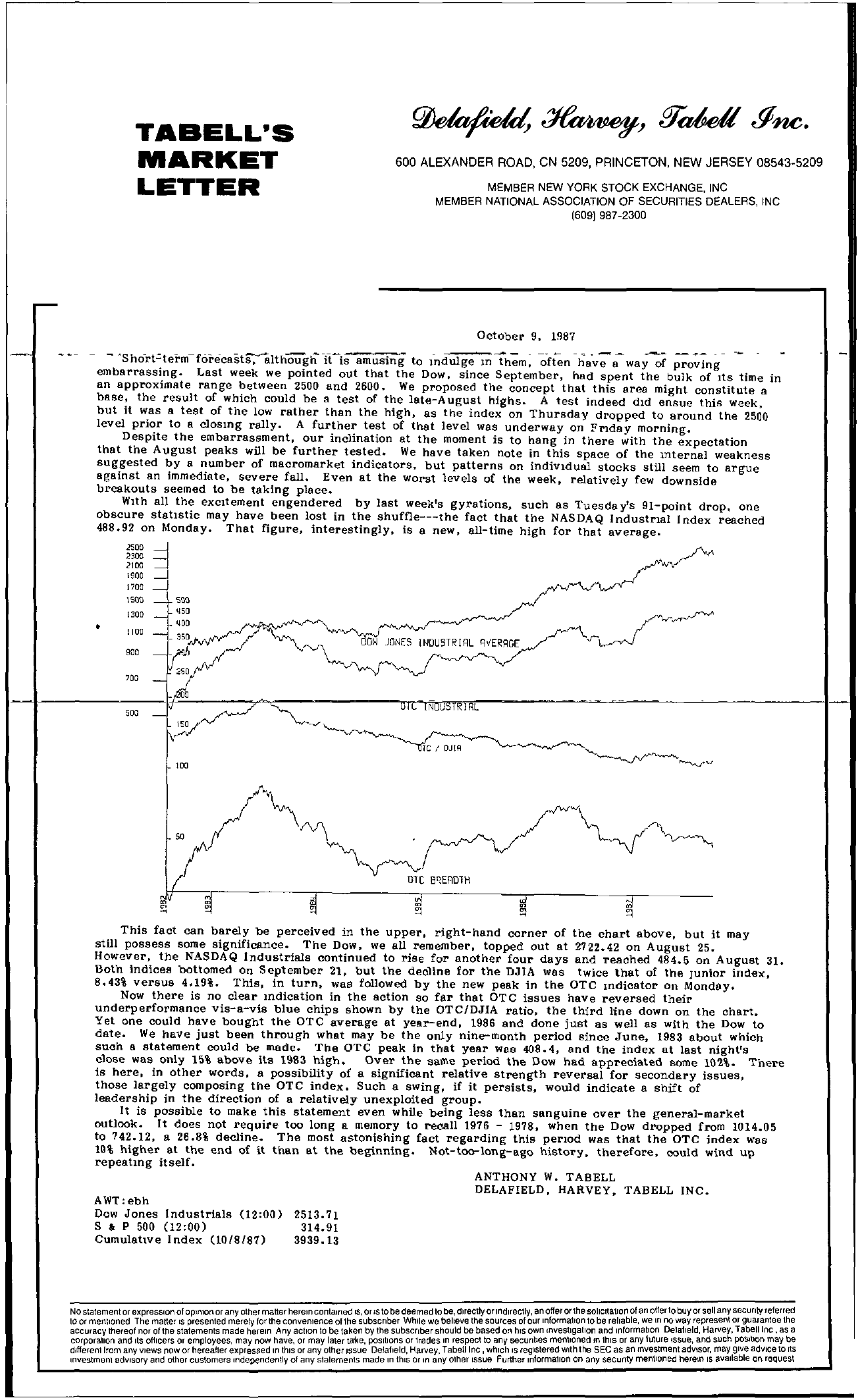 TABELL-S MARKET LETTER 600 ALEXANDER ROAD, CN 5209, PRINCETON, NEW JERSEY 08543-5209 MEMBER NEW YORK STOCK EXCHANGE, INC MEMBER NATIONAL ASSOCIATION OF SECURITIES DEALERS, INC 1609) 987-2300 October 9. 1H87 – – Sho-rt-term-forecasts.-Blthough-it-is amusing to Indulge In th;m. often -ha'v-;-;; wayf pro-;'ing embarrassing. Last week we pointed out that the Dow. since September, had spent the bulk of Its time in an approximate range between 2500 and 2600. We proposed the concept that this area might constitute 8 base. the result of which could be a test of the late-A ugust highs. A test indeed dId ensue this week. but it was 8 test of the low rather than the high. as the index on Thursday dropped to around the 2500 level prior to 8 closmg rally. A further test of that level was underway on FrIday morning. Despite the embarrassment, our inclination at the moment is to hang in there with the expectation that the August peaks will be further tested. We have taken note in this space of the mternal weakness suggested by a number of macromarket indicators. but patterns on indiVIdual stocks still seem to argue against an immediate. severe fall. Even at the worst levels of the week. relatively few downside breakouts seemed to be taking place. WIth all the eXCItement engendered by last week's gyrations. such as Tuesda y's 91-point drop. one obscure sta.tIstic may have been lost in the shuffle—the fact that the NASDAQ IndustrIal Index reached 488.92 on Monday. That figure. interestingly. is a new, ali-time high for that average. J2500 2300 2100 1900 J700 -1 1SQ') 500 !300 ! tOO 450 400 9DD OW JONES INDUSTRIAL AvERAGE DO ole INlJU51R1RL SOD Te / OJIR 100 This fact can barely be perceived in the upper, right-hand corner of the chart above, but it may still possess some significance. The Dow. we ali remember, topped Qut at 2722.42 on August 25. However. the NASDAQ Industrials continued to rise for another four days and reached 484.5 on August 31. Both indices bottomed On September 21, but the decline for the DJIA was twice that of the Junior index, 8.43 versus 4.19. This. in turn. was followed by the new peak in the OTC mdicator on MondilY. Now there is no clear mdication in the action so far that OTe issues have reversed their underperformance vis-a-vis blue chips shown by the OTC/DJIA ratio. the third line down on the chart. Yet one could have bought the OTe average at year-end, 1986 and done just as well as with the Dow to date. We have just been through what may be the only nine-month period since June. 1983 about whiCh such 8 statement could be made. The OTe peak in that year was 408.4, and the index at last night's close was only 15 above its 1983 high. Over the same period the Dow had appreciated some 102. There is here. in other words. 8 possibility of a significant relative strength reversal for secondary issues, those largely composing the OTe index. Such a swing, if it persists, would indicate a shift of leadership in the direction of 8 relatively unexploited group. It is possible to make this statement even While being less than sanguine over the general-market outlook. It does not require too long a memory to recall 1976 – 1978. when the Dow dropped from 1014.05 to 742.12. 8. 26.8 decline. The most astonishing fact regarding this perIod was that the OTe index was 10 higher at the end of it than at the beginning. Not-too-long-ago history, therefore. could wind up repeatmg itself. ANTHONY W. TAB ELL AWTebh DELAFIELD. HARVEY. TAB ELL INC. Dow Jones Industrials 0200) 2513.71 S P 500 (1200) 31491 CumulatlVe Index (10/8/87) 3939.13 No statement or expression of opinion or any other matter herein contained IS, or IS 10 be deemed 10 be, dlrecllyor Indirectly, an offer orthe solicttatlor'l of an offer to buy or sell any secunty referred to or mentioned The matter IS presented merely for the convenience of the subSCriber While we believe the sources of our InformallOn to be reliable, we In no way represent or guaranlee the accuracy thereof nor olthe statements made herein Any action to be taken by the subscnber should be based on his own investigation and Information Delafield, Harvey, Tabe!! Inc, as a corporallon and Its oHlcers or employees, may now have, or may later take, positions or trades In respecl to any ecunhes mentioned In Ihls or any hllure Issue, and such pOSltlon may be dlfferen! from any views now or hereafter expressed In thiS or any other Issue Delafield, Harvey, Tabelllnc, which IS reglsteredwlththe SEC as an Investment adVisor, may give advice 10 liS Investment adVISOry and other customers Independently of any slalemenls made In thIS Or In any olher Issue Further Informa1lon on any security mentioned hereIn IS available on request