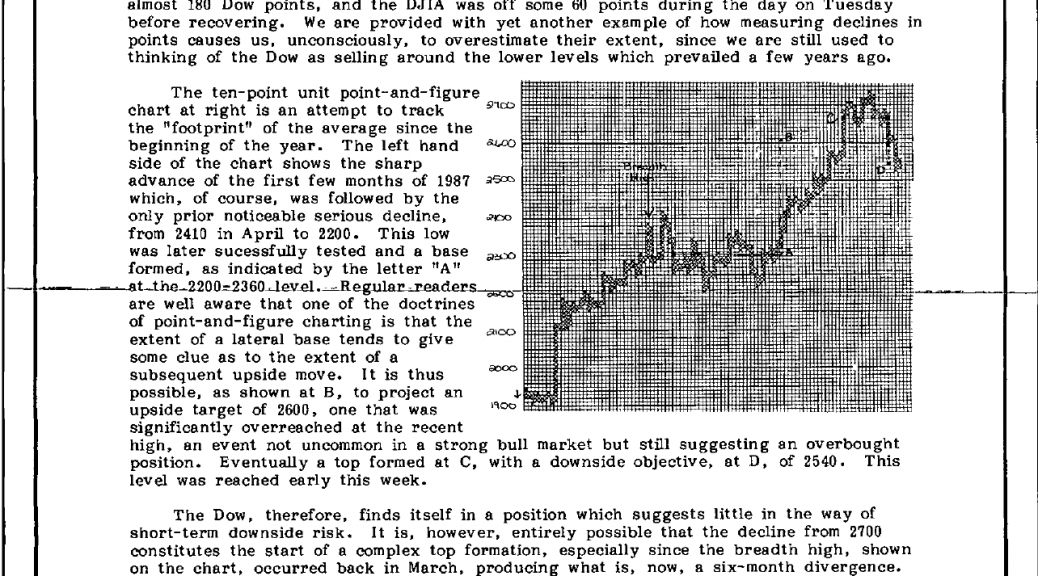 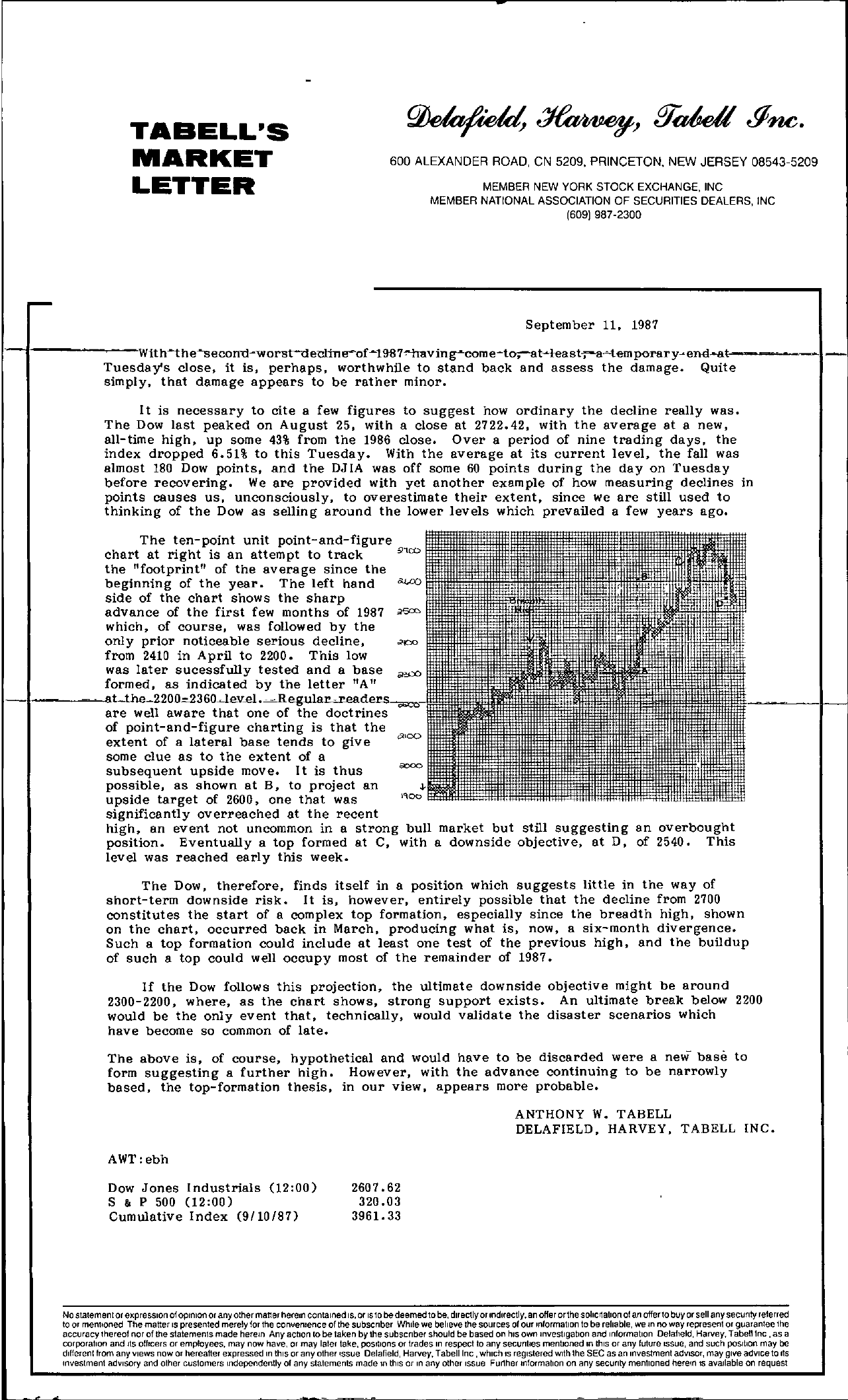 TABELL'S MARKET LETTER 600 ALEXANDER ROAD, CN 5209. PRINCETON. NEW JERSEY 08543-5209 MEMBER NEW YORK STOCK EXCHANGE. INC MEMBER NATIONAL ASSOCIATION OF SECURITIES DEALERS. INC (609) 987-2300 September 11. 1987 1—II—————-WithhE'.,'e'0Ird-rOIslle1tnecrr1987nviin'come-to;-atleastaemperaryen,dl————I—) Tuesday's close, it is, perhaps, worthwhile to stand back and assess the damage. Quite simply, that damage appears to be rather minor. It is necessary to cite a few figures to suggest how ordinary the decline really was. The Dow last peaked on August 25, with a close at 2722.42, with the average at a new, all-time high, up some 43 from the 1986 close. Over a period of nine trading days, the index dropped 6.51 to this Tuesday. With the average at its current level, the fall was almost 180 Dow points, and the DJIA was off some 60 points during the day on Tuesday before recovering. We are provided with yet another example of how measuring declines in points causes us, unconsciously, to overestimate their extent, since we are still used to thinking of the Dow as selling around the lower levels which prevailed a few years ago. The ten-point unit point-and-figure chart at right is an attempt to track 9 the footprint of the average since the beginning of the year. The left hand auo side of the chart shows the sharp advance of the first few months of 1987 ,5 111111111111111I11111ownhliychp,rioofr cnooutrisce,abwleassefroilolouws eddecblyineth, e 1llj!IlI1lllEillItfrom 2410 in April to 2200. This low was later sucessfully tested and a base oo III formed, as indicated by the letter A are well aware that one of the doctrines of point-and-figure charting is that the extent of a lateral base tends to give '00 some clue as to the extent of a subsequent upside move. It is thus possible, as shown at B, to project an upside target of 2600, one that was 1\00 significantly overreached at the recent high, an event not uncommon in a strong bull market but still suggesting an overbought position. Eventually a top formed at C, with a downside objective, at D, of 2540. This level was reached early this week. The Dow, therefore, finds itself in a position which suggests little in the way of short-term downside risk. It is, however, entirely possible that the decline from 2700 constitutes the start of a complex top formation, especially since the breadth high, shown on the chart, occurred back in March, producing what is, now, a six-month divergence. Such a top formation could include at least one test of the previous high, and the buildup of such a top could well occupy most of the remainder of 1987. If the Dow follows this projection, the ultimate downside objective might be around 2300-2200, where, as the chart shows, strong support exists. An ultimate break below 2200 would be the only event that, technically, would validate the disaster scenarios which have become so common of late. The above is, of course, hypothetical and would have to be discarded were a new base to form suggesting a further high. However, with the advance continuing to be narrowly based, the top-formation thesis, in our view. appears more probable. ANTHONY W. TABELL DELAFIELD, HARVEY, TABELL INC. AWTebh Dow Jones Industrials (1200) S & P 500 (1200) Cumulative Index (9/10/87) 2607.62 320.03 3961. 33 No statement or expression of oplmon or any other matter herein contained IS, or IS 10 bedeemedlo be, directly or Indlreclly, an offer orthe sollcatlon 01 an offerto buy or sell any security relerred to or menhoned The matter IS presented merely for the convemence of the subscnber While we believe the sources of our Information to be reliable, we In no way represent or guarantee the accuracy thereof nor of the statements made herein Any actIOn to be taken by the subscriber should be based on hiS own mvestlgabon and information Delafleld, Harvey, Tabell Inc ,as a corporallon and Its otllcers or employees, may now have, or may later take, posrtlOns or trades In respect to any secuntles mentioned In thiS or any future ISsue, and such poSition may be dltlerenl from any views now or hereafter expressed In thiS or any other Issue Delafield, Harvey, Tabellinc , which IS registered With the SEC as an Investment adVISor, may give adVice to Its Investment adVISOry and other customers Independently of any statements made In thiS or In any other Issue Further Information on any security mentioned herein IS available on request