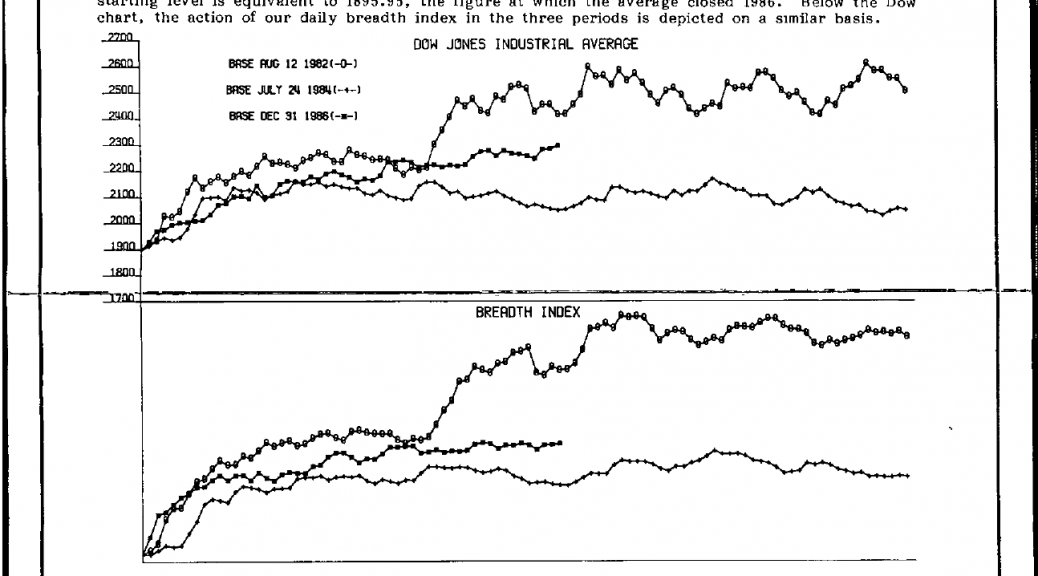 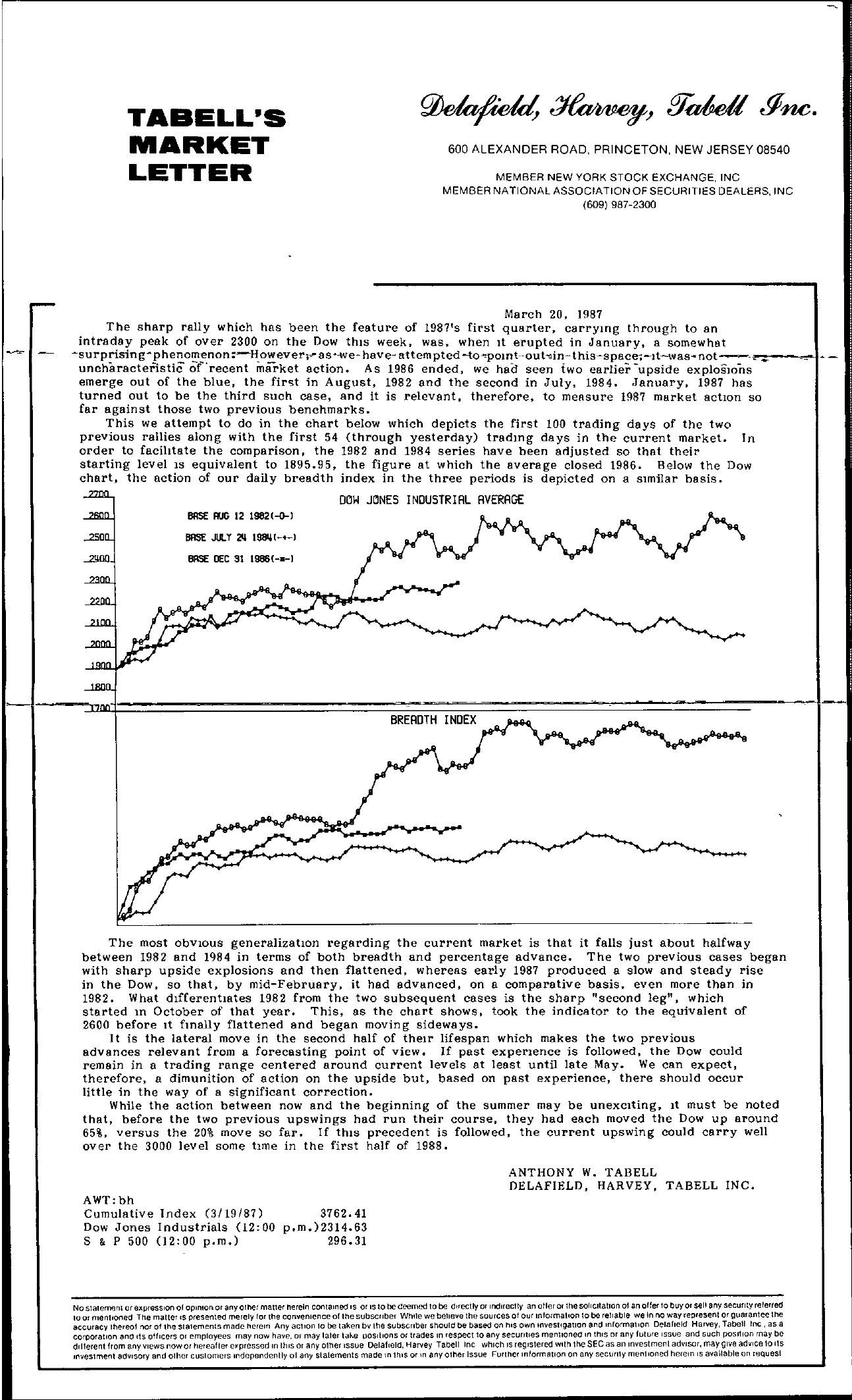 TABELL'S MARKET LETTER 600 ALEXANDER ROAD, PRINCETON, NEW JERSEY 08540 MEMBER NEW YORK STOCK EXCHANGE, INC MEMBER NATIONAL ASSOCIATION OF SECURITIES DEALERS, INC (609) 987-2300 March 20. 1987 The sharp rally which has been the feature of 1987's first quarter. carryIng through to an intraday peak of over 2300 on the Dow thIS week. was, when It erupted in January, a somewhat -5 u rp risin g – phenomenon—-H owev er.' as -we haY e attem p ted –to–POl nt-ou hin t his-s pace. -)t–\… as- not— '—I uncharacteristic of'recent rruuket action. As 1986 ended, we had seen two earlier-upside explosJOns emerge out of the blue, the fir'St in August, 1982 and the second in July, 1984. January. 1987 has turned out to be the third such case, and it is relevant. therefore. to measure 1987 market actIon so far against those two previous benchmarks. This we attempt to do in the chart below which depicts the first 100 trading days of the two previous rallies along with the first 54 (through yesterday) tradmg days in the current market. In order to facilItate the comparison, the 1982 and 1984 series have been adjusted so that their starting level IS equivalent to 1895.95. the figure at which the average closed 1986. Below the Dow chart, the action of our daily breadth index in the three periods is depicted on a sImilar basis. BASE FIJG 12 1982 (-0-) DOW JONES INDUSTRIAL AVERAGE BASE JULy 198ij1–) BASE DEC 31 1986(-) The most ObVIOUS generalizatIOn regarding the current market is that it falls just about halfway between 1982 and 1984 in terms of both breadth and percentage advance. The two previous cases began with sharp upside explosions and then flattened. whereas early 1987 produced a slow and steady rise in the Dow. so that. by mid-February. it had advanced, on a comparative basis. even more than in 1982. What dIfferentIates 1982 from the two subsequent cases is the sharp second legll , which started m October of that year. This. as the chart shows, took the indicator to the equivalent of 2600 before It fmally flattened and began moving sideways. It is the lateral move in the second half of theIr lifespan which makes the two previous advances relevant from a forecasting point of view. If past experIence is followed, the Dow could remain in a trading range centered around current levels at least until late May. We can expect, therefore, a dimunition of action on the upside but, based on past experience, there should occur little in the way of a significant correction. While the action between now and the beginning of the summer may be uneXCIting. It must be noted that, before the two previous upswings had run their course, they had each moved the Dow up around 65. versus the 20 move so far. If thIS precedent is followed, the current upswing could carry well over the 3000 level some tIme in the first half of 1988. AWTbh Cumulative Index (3/19/87) 3762.41 Dow Jones Industrials (12 00 p.m.)2314.63 S & P 500 (I200 p.m.) 296.31 ANTHONY W. TABELL DELAFIELD. HARVEY. TABELL INC. NO stalemmll or expression of Opinion or any other matter herein contained IS Of IS to be deemed 10 be directly Of Indlrectty an offer or the soliCitation of an offer to buyor sell any security referred to or menuoned The malj(IIS presented merely lor the convenience of the subscriber While we betlevethe sources of our Informallon to be retlable we In no way represent or guarantee the accuracy thereof nor of the Statements made herein Any action to be taken bv the subscnber shoutd be based on hiS own Investlgallon and information Delafield Harvey, TabeH tnc, as a corporation and Its officers or employees may now have, or may later tae POSitiOnS or trades In respect to any securrtles mentioned In thiS or any future Issue and such pOSitIOn may be dillerent from any views now or hereafter epressed In thiS Of any other Issue Delafield, Harvey Tabell Inc which IS registered With the SECas an Investment adVisor, may give advlcelo lIs Investment adVISOry and other customers Independently 01 any statements made In Ihls or In any other Issue Further information on any secunty menlloned herem IS avallable on reQuest