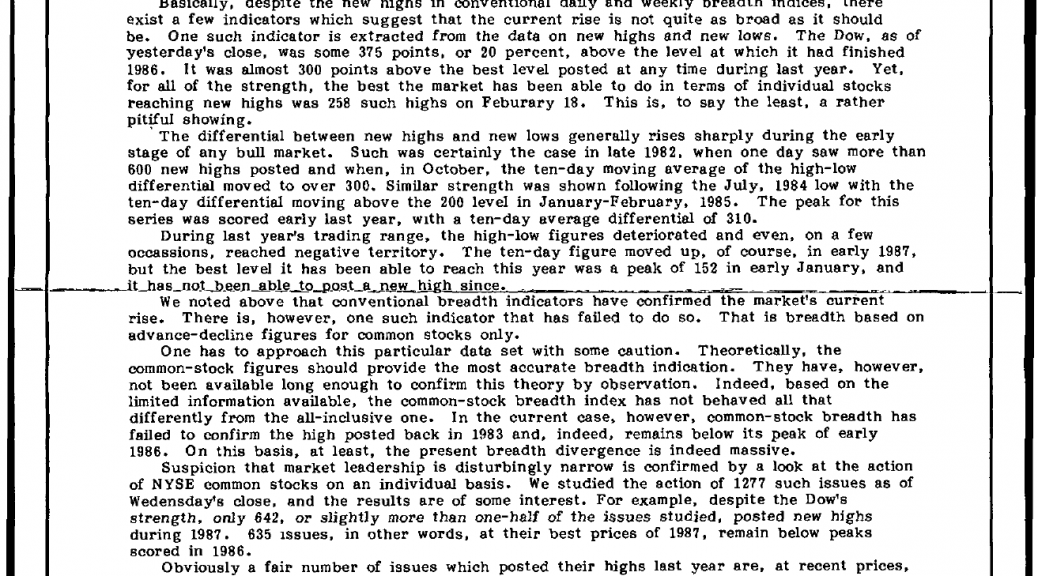 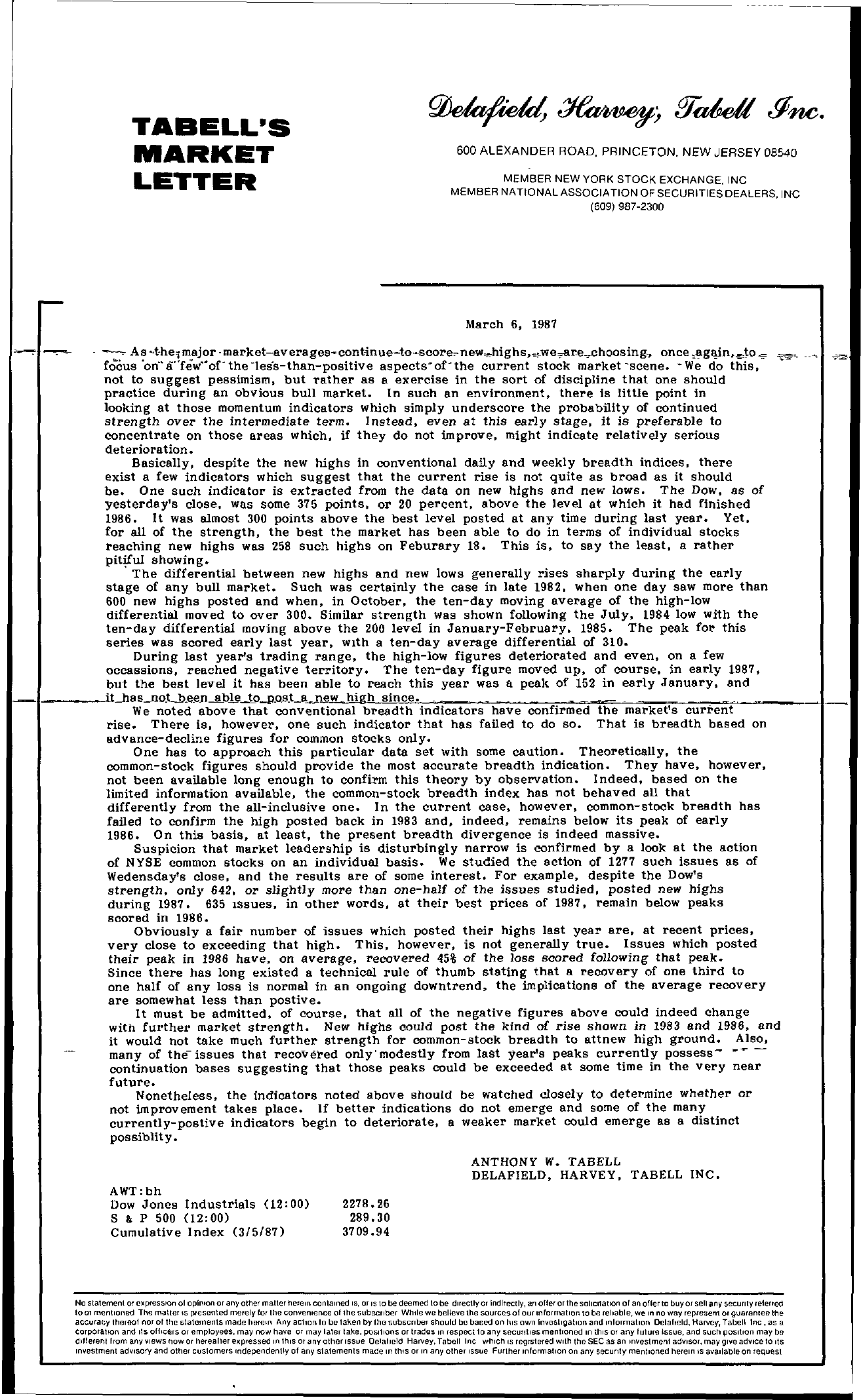 TABELL'S MARKET LETTER 600 ALEXANDER ROAD, PRINCETON, NEW JERSEY 08540 MEMBER NEW YORK STOCK EXCHANGE, INC MEMBER NATIONAL ASSOCIATION OF SECURITIES DEALERS, INC (609) 987-2300 March 6. 1987 — – A …t-heim8jor -m8rket-averagescontinu-e-toscore'newhighs .. ,wer.e,choasing., once gl!into – focus on' afewof- the less-than-positive aspectsof- the current stock market -scene. We do this, not to suggest pessimism. but rather as a exercise in the sort of discipline that one should practice during an obvious bull market. In such an environment. there is little point in looking at those momentum indicators which simply underscore the probability of continued strength over the intermediate term. lnstead, eVen at this early stage, it is preferable to concentrate on those areas which. if they do not improve. might indicate relatively serious deterioration. Basically, despite the new highs in conventional daily and weekly breadth indices. there exist a few indicators which suggest that the current rise is not quite as broad as it should be. One such indicator is extracted from the data on new highs and new lows. The Dow, 8S of yesterday's close, was some 375 points, or 20 percent, above the level at which it had finished 1986. It was almost 300 points above the best level posted at any time during last year. Yet. for all of the strength, the best the market has been able to do in terms of individual stocks reaching new highs was 258 such highs on Feburary 18. This is. to say the least. a rather pitiful showing. , The differential between new highs and new lows generally rises sharply during the early stage of any bull market. Such was certainly the case in late 1982. when one day saw more than 600 new highs posted and when. in October. the ten-day moving average of the high-low differential moved to over 300. Similar strength was shown following the July. 1984 low with the ten-day differential moving above the 200 level in January-February. 1985. The peak for this series was scored early last year, wlth a ten-day average differential of 310. During last year's trading range, the high-low figures deteriorated and even, on a few occassions, reached negative territory. The ten-day figure moved up, of course, in early 1987, but the best level it has been able to reach this year was a peak of 152 in early January. and clIltasnotDnbe1o-PostJDW hignhsgince'7- We noted above that conventional breadth indicators have confirmed the market's current rise. There is, however, one such indicator that has failed to do so. That is breadth based on advance-decline figures for common stocks only. One has to approach this particular data set with some caution. Theoretically, the common-stock figures should provide the most accurate breadth indication. They have, however, not been available long enough to confirm this theory by observation. Indeed. based on the limited information available, the common-stock breadth index has not behaved all that differently from the all-inclusive one. In the current case, however. common-stock breadth has failed to confirm the high posted back in 1983 and. indeed. remains below its peak of early 1986. On this basis. at least, the present breadth divergence is indeed massive. Suspicion that market leadership is disturbingly narrow is confirmed by a look at the action of NYSE common stocks on an individual basis. We studied the action of 1277 such issues as of Wedensdayts close. and the results are of some interest. For example despite the Dow's strength. only 642. or slightly more than one-half of the issues studied. posted new highs during 1987. 635 Issues, in other words. at their best prices of 1987, remain below peaks scored in 1986. Obviously a fair number of issues which posted their highs last year are, at recent prices, very close to exceeding that high. This. however, is not generally true. Issues which posted their peak in 1986 have. on average. recovered 45 of the loss scored following that peak. Since there has long existed a technical rule of thumb stating that a recovery of one third to one half of any loss is normal in an ongoing downtrend, the implications of the average recovery are somewhat less than postive. It must be admitted, of course. that all of the negative figures above could indeed Change with further market strength. New highs could post the kind of rise shown in 1983 and 1986, and it would not take much further strength for common-stock breadth to attnew high ground. Also, many of the- issues that recovered only'modestly from last year's peaks currently possess- continuation bases suggesting that those peaks could be exceeded at some time in the very near future. Nonetheless. the indicators noted above should be watched closely to determine whether or not improvement takes place. If better indications do not emerge and some of the many currently-postive indicators begin to deteriorate, a weaker market could emerge as a distinct possiblit y. AWTbh Dow Jones Industrials 0200) S & P 500 (12 00) Cumulative Index (3/5/87) 2278.26 289.30 3709.94 ANTHONY W. TABELL DELAFIELD. HARVEY. TABELL INC. No statement or expreSSIOn ot oplmon or any other matter herein contained IS, or IS 10 be deemed to be directly or Indirectly, an ofter or the soliCitation of an offer to buy or sell any secuflly reterted 1001 mentioned lhe matter IS presented merely tor the convenience of the sUbscliber While we belJeve the sources 01 our information to be rehable, we In no way represent or guarantee the accuracy thereof nor of the statements made herelf\ Any achon to be taken by the subscriber should be based on hiS own Investigation and information Delaftetd, Harvey, labeU Inc, as a corporahon and lIs ofhcers or employees, may now have or may later take, POSitions or trades In respeclto any seCUrities menlloned In thiS or any future Issue, and such POSition may be dlf!erent Irom any views now or herealler epressed In this or any other Issue Delafield Harvey, label! Inc which IS registered With the SEC as an Investment adVisor, may give advice to ItS Inyestment adVISOry and other customers Independently of any statemenls made In thiS or In any other Issue Further Information on any security mentioned herein IS available on request