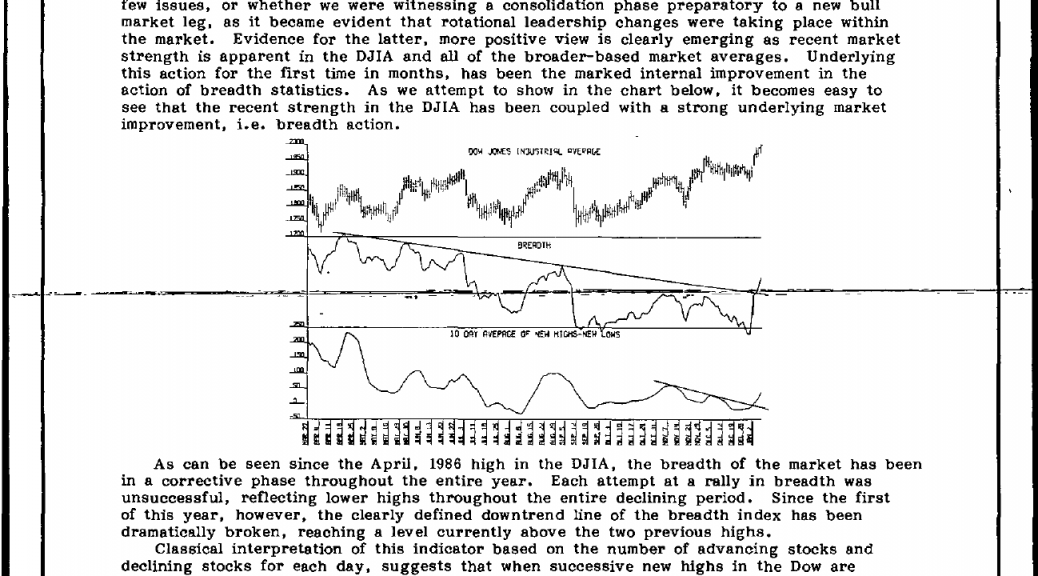 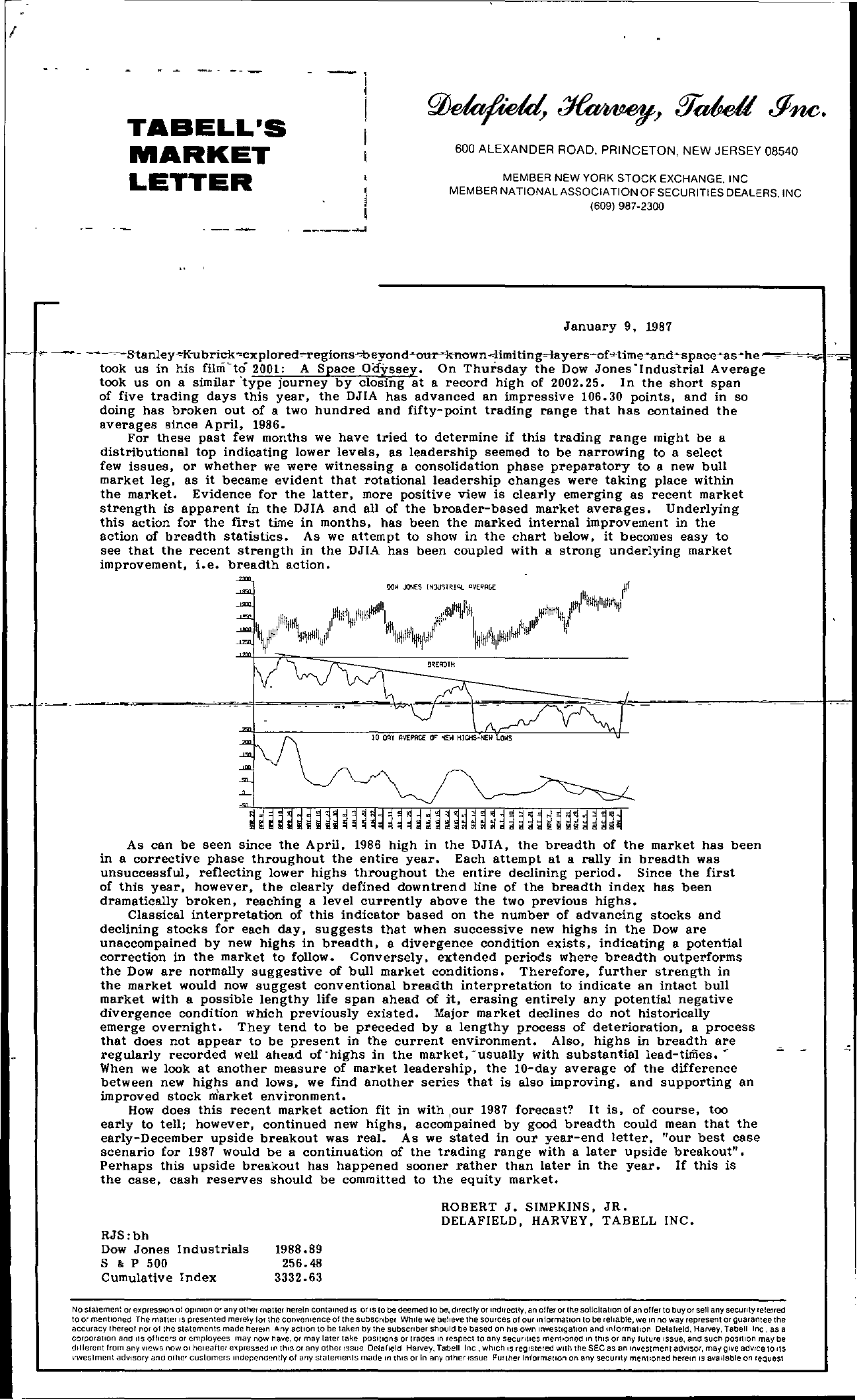 I TABELL'S MARKET LETTER —….. 600 ALEXANDER ROAD, PRINCETON, NEW JERSEY 08540 MEMBER NEW YORK STOCK EXCHANGE, INC MEMBER NATIONAL ASSOCIATION OF SECURITIES DEALERS, INC (609) 9872300 January 9, 1987 – – – -S18nley-ubrickexplored'regions-beyond OUI known–limiting–layers-oftimendspa-ce–as'he-',-,,,,d– took us in his filni'to 2001 A Space Odyssey. On Thursday the Dow Joneslndustrial Average took us on a similar type journey by closing at a record high of 2002.25. In the short span of five trading days this year, the DJIA has advanced an impressive 106.30 points. and in so doing has broken out of a two hundred and fifty-point trading range that has contained the averages since April, 1986. For these past few months we have tried to determine if this trading range might be a distributional top indicating lower levels. as leadership seemed to be narrowing to a select few issues. or whether we were witnessing a consolidation phase preparatory to 8 new bull market leg. as it became evident that rotational leadership changes were taking place within the market. Evidence for the latter, more positive view is clearly emerging as recent market strength is apparent in the DJIA and all of the broader-based market averages. Underlying this action for the first time in months, has been the marked internal improvement in the action of breadth statistics. As we attempt to show in the chart below, it becomes easy to see that the recent strength in the DJIA has been coupled with a strong underlying market improvement, i.e. breadth action. As can be seen since the April, 1986 high in the DJIA, the breadth of the market has been in a corrective phase throughout the entire year. Each attempt at a rally in breadth was unsuccessful, reflecting lower highs throughout the entire declining period. Since the first of this year, however, the clearly defined downtrend line of the breadth index has been dramatically broken, reaching a level currently above the two previous highs. Classical interpretation of this indicator based on the number of advancing stocks and declining stocks for each day, suggests that when successive new highs in the Dow are unaccompained by new highs in breadth, a divergence condition exists, indicating a potential correction in the market to follow. Conversely, extended periods where breadth outperforms the Dow are normally suggestive of bull market conditions. Therefore, further strength in the market would now suggest conventional breadth interpretation to indicate an intact bull market with a possible lengthy life span ahead of it, erasing entirely any potential negative divergence condition Which previously existed. Major market declines do not historically emerge overnight. They tend to be preceded by a lengthy process of deterioration, a process that does not appear to be present in the current environment. Also, highs in breadth are regularly recorded well ahead of -highs in the market, usually with substantial lead-tWes ..When we look at another measure of market leadership, the lO-day average of the difference between new highs and lows, we find another series that is also improving. and supporting an improved stock m\arket environment. How does this recent market action fit in with lour 1987 forecast It is, of course, too early to tellj however, continued new highs, accompained by good breadth could mean that the early-December upside breakout was real. As we stated in our year-end letter. !four best case scenario for 1987 would be a continuation of the trading range with a later upside breakout. Perhaps this upside breakout has happened sooner rather than later in the year. If this is the case, cash reserves should be committed to the equity market. RJSbh Dow Jones Industrials S & P 500 Cumulative Index 1988.89 256.48 3332.63 ROBERT J. SIMPKINS, JR. DELAFIELD, HARVEY, TAB ELL INC. NO statement or expression of opinion o any other mattor herein contained IS or IS to be deemed to be, dIrectly or IndIrectly, an offer or the solicitatIon of an offer 10 buy or sell any secunty reterred to or mentIoned The matter IS presented merely lor tho convemence of the subSCriber While we believe the sources of our Inlormallon to be rellabte, we In noway represent orQuaranteethe accuracy lhereof nor 01 the slat am ants made herein Any action to be taken by the subscriber should be based on hIS own investIgation and mformatlon DelafIeld, Harvey, Tebell Inc, as a corporation and 115 officers or employees may now have, or may later take positions or trades In respect to any SeCUrities mentioned In thiS or any future Issue, and such POSition may be dilierent from any views now or heleafter e'(presStld In thiS or any othellssue Delafield Harvey, Tabell Inc, which IS registered With the SEC as an Invest men I adVisor, maYQlve adVIce to Its Investment adVISory and Olho- customers Independently of any statements made In thiS or In any other ISsue Further Information on any secullty mentioned herein IS available on request