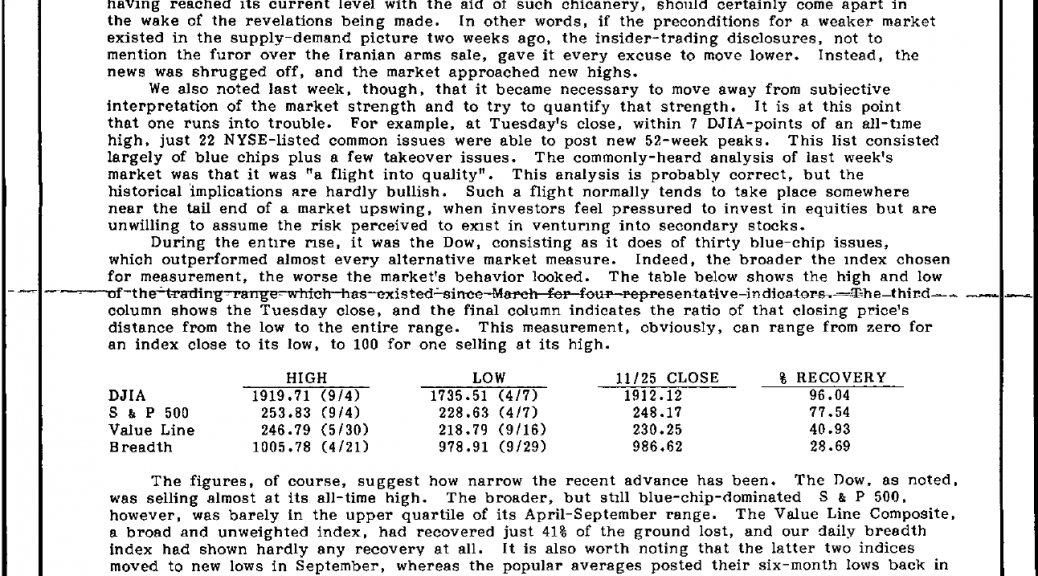 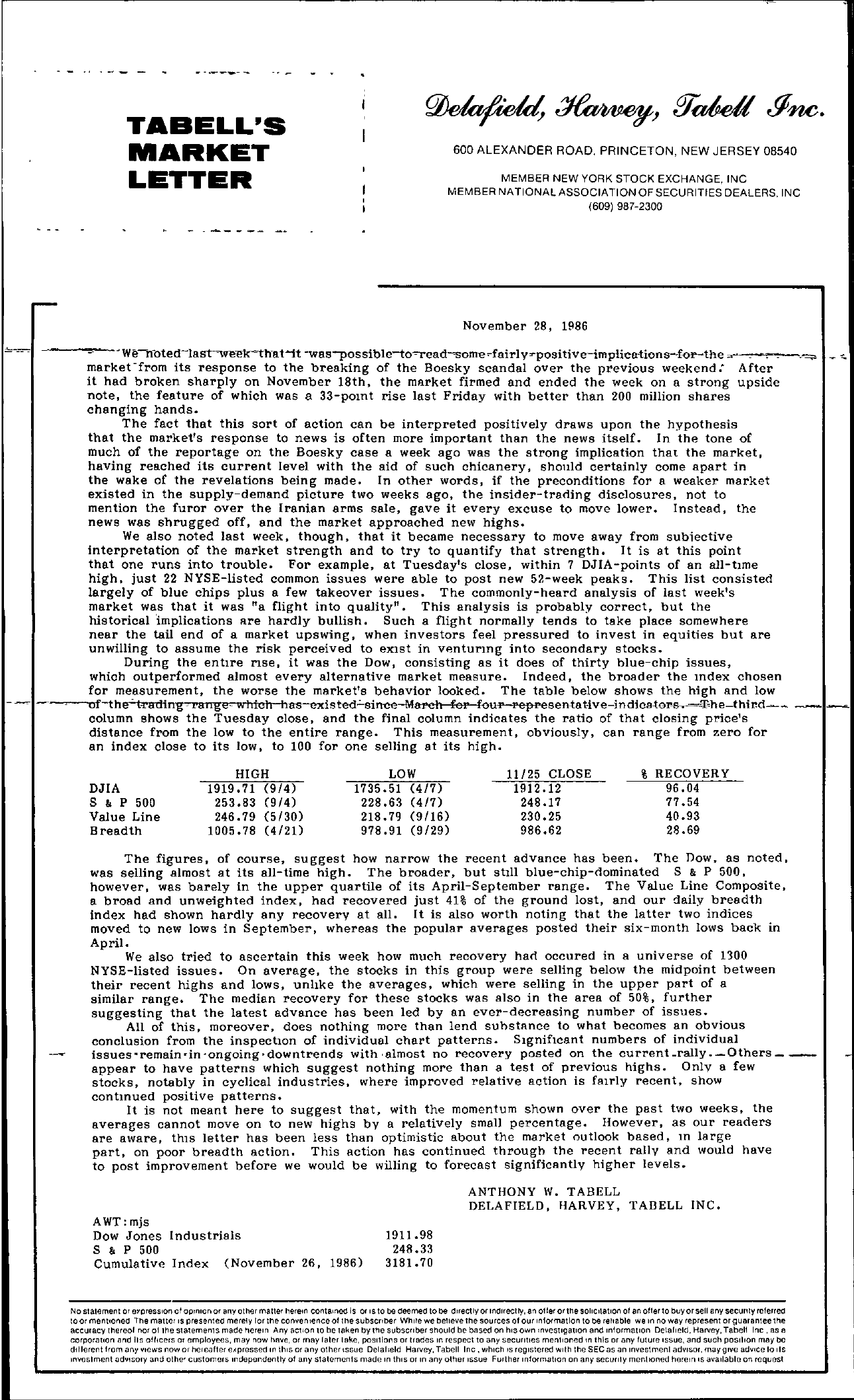 TABELL'S MARKET LETTER 600 ALEXANDER ROAD. PRINCETON. NEW JERSEY 06540 MEMBER NEW YORK STOCK EXCHANGE. INC MEMBER NATIONAL ASSOCIATION OF SECURITIES DEALERS. INC (609) 987-2300 November 28, 1986 –'-W-nbted-Iastl\re-ek-rhat–tt -waB-possible;oead–some'fairlypositive-impHeations-rf-()!–the… marketfrom its response to the breaking of the Boesky scandal over the previous weekend After it had broken sharply on November 18th, the market firmed and ended the week on a strong upside note. the feature of which was a 33-pOlnt rise last Friday with better than 200 million shares changing hands. The fact that this sort of action can be interpreted positively draws upon the hypothesis that the market's response to news is often more important than the news itself. In the tone of much of the reportage on the Boesky case a week ago was the strong implication that the market, having reached its current level with the aid of such chicanery. should certainly come apart in the wake of the revelations being made. In other words, if the preconditions for a weaker market existed in the supply-demand picture two weeks ago. the insider-trading disclosures. not to mention the furor over the Iranian arms sale. gave it every excuse to move lower. Instead, the news was shrugged off, and the market approached new highS. We also noted last week, though, that it became necessary to move away from subiective interpretation of the market strength and to try to quantify that strength. It is at this point that one runs into trouble. For example, at Tuesday's close, within 7 DJIA-points of an all-bme high. just 22 NYSE-listed common issues were able to post new 52-week peaks. This list consisted largely of blue chips plus a few takeover issues. The commonly-heard analysis of last week's market was that it was a flight into quality. This analysis is probably correct. but the historical 'implications fire hardly bullish. Such a flight normally tends to take place somewhere near the tail end of a market upswing, when investors feel pressured to invest in equities but are unwilling to assume the risk perceived to eXIst in vp-nturmg into secondary stocks. During the entlre Mse. it was the Dow, consisting as it does of thirty blue-chip issues. which outperformed almost every alternative market measure. Indeed, the broader the Index chosen for measurement, the worse the market's behavior looked. The table below shows the high and low —-oof-thea-dingrarrgh-has-cxist-ed…sinee-Ma-reh fer fou-I–rep-resen-tative-indicB.tor-s–.- he-thir.d ….. – – column shows the Tuesday close. and the final column indicates the ratio of that closing price's distance from the low to the entire range. This measurement. obviously, can range from zero for an index close to its low, to 100 for one selling at its high. DJIA S & P 500 Value Line Breadth HIGH 1919.71 (9/4) 253.83 (9/4) 246.79 (5/30) 1005.78 (4/21) LOW 1735.51 (4/7) 228.63 (4/7) 218.79 (9/16) 978.91 (9/29) 11/25 CLOSE 1912.12 248.17 230.25 986.62 RECOVERY 96.04 77.54 40.93 28.69 The figures. of course, suggest how narrow the recent advance has been. The Dow. as noted. was selling almost at its all-time high. The broader, but shll blue-chip-dominated S & P 500, however, was barely in the upper quartile of its April-September range. The Value Line Composite, s broad and unweighted index, had recovered just 41 of the ground lost, and our daily breadth index had shown hardly any recovery at all. It is also worth noting that the latter two indices moved to new lows in September, whereas the popular averages posted their six-month lows back in April. We also tried to ascertain this week how much recovery han occured in a universe of 1'300 NYSE-listed issues. On average. the stocks in this group were selling below the midpoint between their recent highs and lows, unhke the averages. which were selling in the upper part of a similar range. The median recovery for these stocks was also in the area of 50. further suggesting that the latest advance has been led by an ever-decreasing number of issues. All of this, moreover. does nothing more than lend suhstance to what becomes an obvious conclusion from the inspectlon of individual chart patterns. SIgnifIcant numbers of individual issues remain in -ongoing downtrends with'slmost no recovery posted on the current -rally. Others appear to have patterns which suggest nothing more than a test of previous highs. Only a few stocks, notably in cyclical industries. where improved relative action is fairly recent. show contmued positive patterns. It is not meant here to suggest that. with the momentum shown over the past two weeks, the averages cannot move on to new highs by a relatively small percentage. However. as our readers are aware. thIS letter has been less than optimistic about the market outlook based. In large part. on poor breadth action. This action has continued through the recent rally and would have to post improvement before we would be willing to forecast significantly higher levels. AWTmjs Dow Jones Industrials S & P 500 Cumulative Index (November 26, 1986) 1911.98 248.33 3181. 70 ANTHONY IV. TABELL DELAFIELD, HARVEY, TADELL INC. No statement or eYpresslon of opInion Of tiny other matter herem contamed is or IS to be deemed to be directly or mdlreclly, an oller or the soliCitation of an offer to buyor set! any secunty referred toor mentioned The mailer IS presented merely lor the convenience of thesubscnber White we be!1eve the sources of our information to be reliable we In no way represent or guarantee the accuracy thereof nor 01 the statements made herein Any action to be taken by the subscriber should be based on hiS own mvestlgatlon and information Delafield, Harvey, Tabell Inc, as a corporation and Its of/lcers or employees, may now have, or may later lake, positions or trades In respect to any secufltles mentioned In this or any future Issue, and such poslhon may be dltlerent from any Jews now or hereafter etpressed In thiS or any other Issue Delafield Harvey, Tabell Inc, which IS regIStered With the SECas an Investmenl adVisor, may give adVice to ItS Investment adVISory and othe' customers Independently of any statements made In thiS or In any other Issue Further Information on any secuflty mentioned herein IS available on roqucst