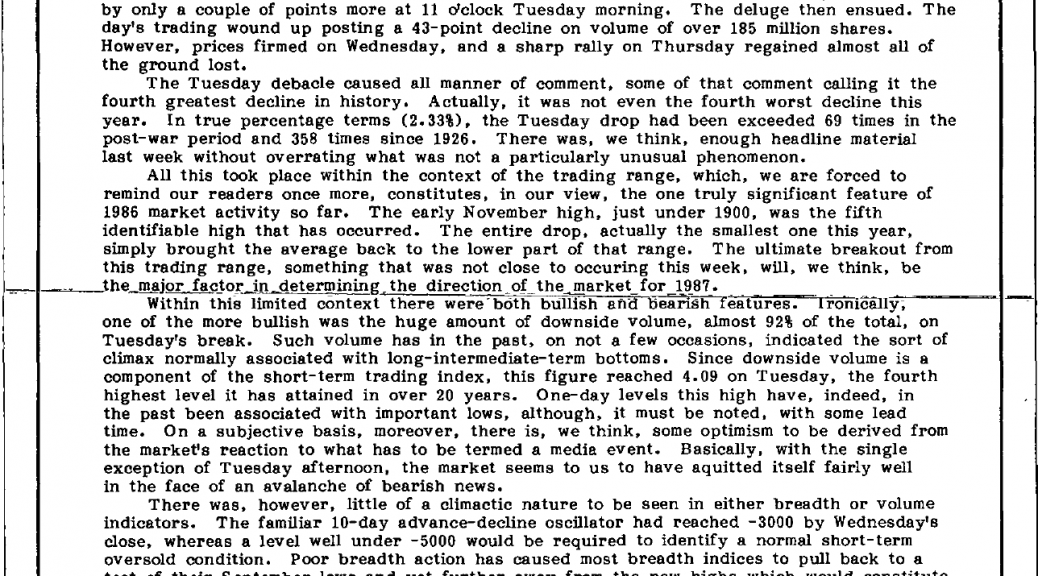 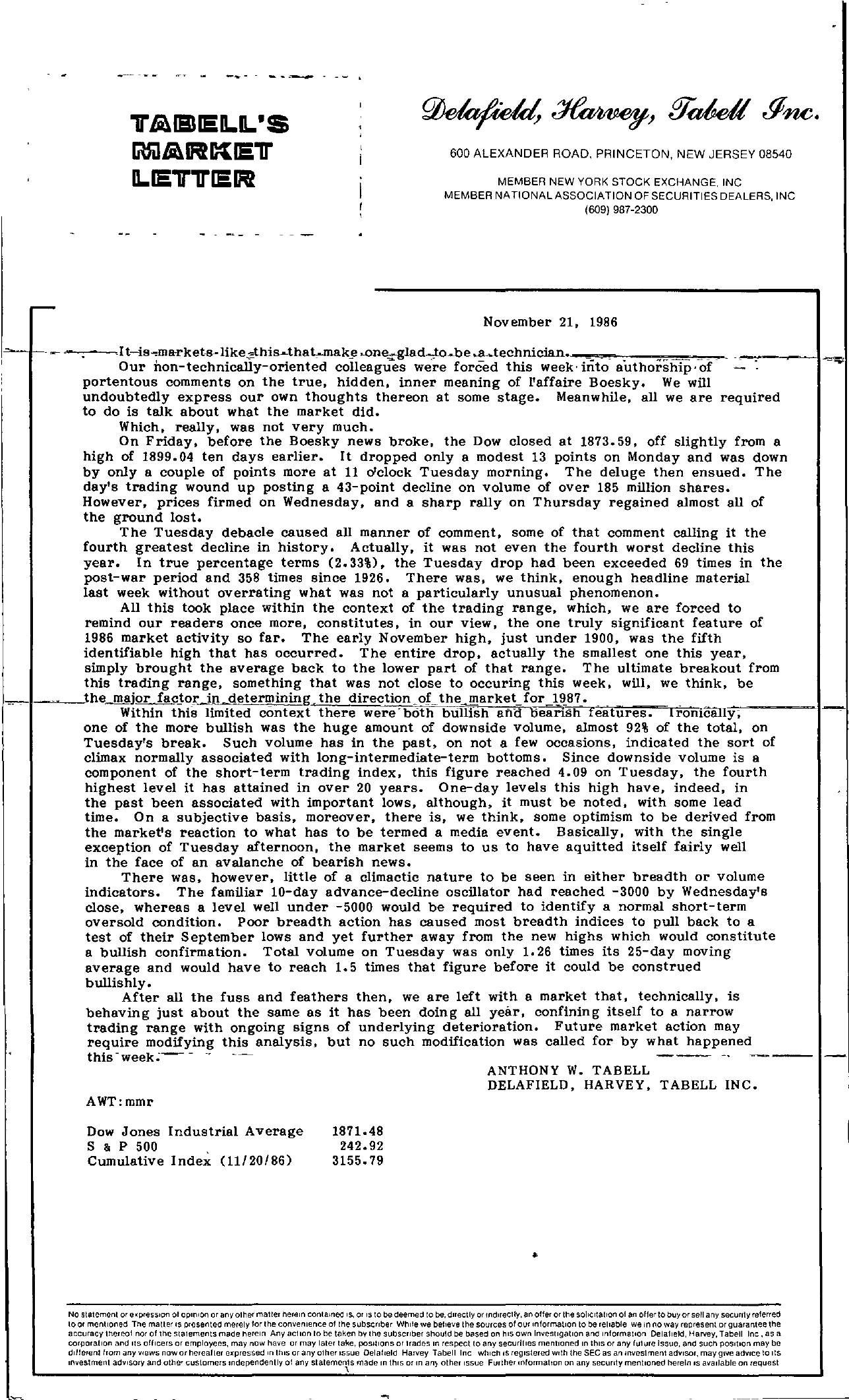 T (BHELL'S r.lJiIR n ( l E T LIETTIER 600 ALEXANDER ROAD, PRINCETON, NEW JERSEY 08540 MEMBER NEW YORK STOCK EXCHANGE, INC MEMBER NATIONAL ASSOCIATION OF SECURITIES DEALERS, INC (609) 9872300 November 21, 1986 – , —–J t-ism ..rkets-like,thisthatmak.l! .oneglad-(hbe .a..technician…,-,…,–,..,., Our non-technically-oriented colleagues we're forced this week, into' authorship'-of' portentous comments on the true, hidden, inner meaning of l'affaire Boesky. We will undoubtedly express our own thoughts thereon at some stage. Meanwhile, all we are required to do is talk about what the market did. Which, really, was not very much. On Friday, before the Boesky news broke, the Dow closed at 1873.59, off slightly from a high of 1899.04 ten days earlier. It dropped only a modest 13 points on Monday and was down by only a couple of points more at 11 o'clock Tuesday morning. The deluge then ensued. The day's trading wound up posting a 43-point decline on volume of over 185 million shares. However, prices firmed on Wednesday, and a sharp rally on Thursday regained almost all of the ground lost. The Tuesday debacle caused all manner of comment, some of that comment calling it the fourth greatest decline in history. Actually, it was not even the fourth worst decline this year. In true percentage terms (2.33), the Tuesday drop had been exceeded 69 times in the post-war period and 358 times since 1926. There was, we think, enough headline material last week without overrating what was not a particularly unusual phenomenon. All this took place within the context of the trading range, which, we are forced to remind our readers once more, constitutes, in our view, the one truly significant feature of 1986 market activity so far. The early November high, just under 1900, was the fifth identifiable high that has occurred. The entire drop, actually the smallest one this year, simply brought the average back to the lower part of that range. The ultimate breakout from this trading range, something that was not close to occuring this week, will, we think, be I.–,the major facJor in determining the direction,o! the market for 1987. Within this limited context there were'both bullish and bearish' features. IroniCalI.-yC,—–1 one of the more bullish was the huge amount of downside volume, almost 92 of the total, on Tuesday's break. Such volume has in the past, on not a few occasions, indicated the sort of climax normally associated with long-intermediate-term bottoms. Since downside volume is a component of the short-term trading index, this figure reached 4.09 on Tuesday, the fourth highest level it has attained in over 20 years. One-day levels this high have, indeed, in the past been associated with important lows, although, it must be noted, with some lead time. On a subjective basis, moreover, there is, we think, some optimism to be derived from the market's reaction to what has to be termed a media event. Basically, with the single exception of Tuesday afternoon, the market seems to us to have aquitted itself fairly well in the face of an avalanche of bearish news. There was, however, little of a climactic nature to be seen in either breadth or volume indicators. The familiar 10-day advance-decline oscillator had reached -3000 by Wednesday's close, whereas a level well under -5000 would be required to identify a normal short-term oversold condition. Poor breadth action has caused most breadth indices to pull back to a test of their September lows and yet further away from the new highs which would constitute a bullish confirmation. Total volume on Tuesday was only 1.26 times its 25-day moving average and would have to reach 1.5 times that figure before it could be construed bullishly. After all the fuss and feathers then, we are left with a market that, technically, is behaving just about the same as it has been doing all year, confining itself to a narrow trading range with ongoing signs of underlying deterioration. Future market action may require modifying this analysis, but no such modification was called for by what happened this'week;–' – – – ' , – ANTHONY W. TABELL DELAFIELD, HARVEY, TABELL INC. AWTmmr Dow Jones Industrial Average S & P 500 Cumulative Inde (11/20/86) 1871.48 242.92 3155.79 NO statement or c(presslon Of opiniOn or any other mailer herem contamed IS, or IS to be deemed to be, directly or indirectly, an oller or the soliCitation at an offer to buyer sell any secunly reterred IOOf mentioned The matter IS presented merely lor the Convenience 01 the subSCriber While we beheve the sources of our information to be reliable we In no way represent or guarantee the accuracy lhereol nor of the statements made herein Any action to be taken bv the subSCriber Should be based on hiS own Investigation and Information Delafield, Harvey, Tabell Inc, as a corporation and Its officers or employees, may nOw have or may laler take, positions or !rades In respect to any securities men!loned In thiS or any fu!ure Issue, and such pOSl\lon may be dillerenl from any views now or herealler expressed In thiS or any o!her Issue Delafield Harvey Tabell Inc whlch.S registered With the SEC as an investment adVisor, mayglVc adVice 10 Its Investment adVISOry and olhe' customers Independently 01 any statemen,ls made In thiS or In anj other Issue Furlher mformallon on any security mentioned herein rs available on request