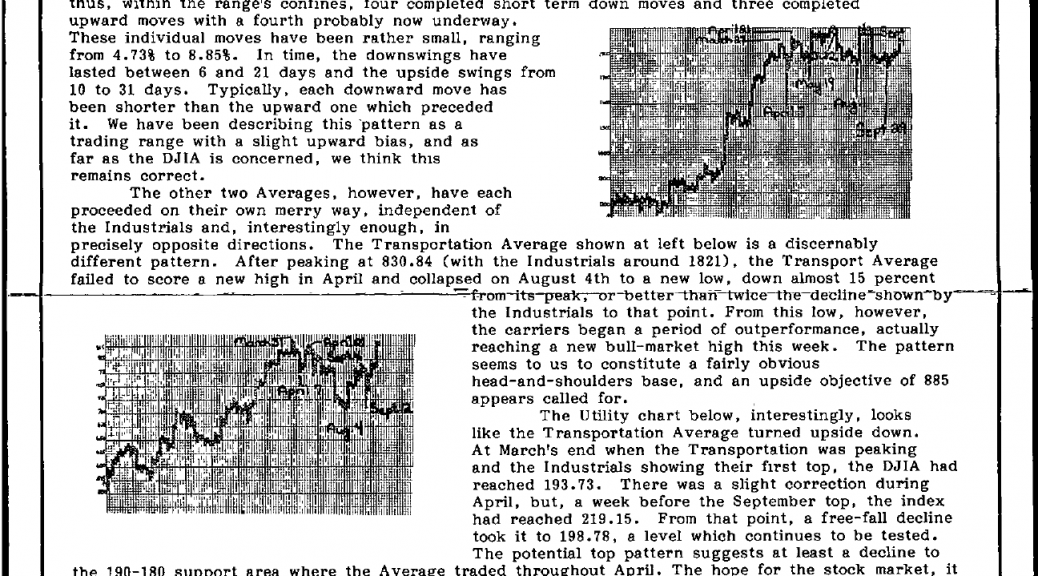 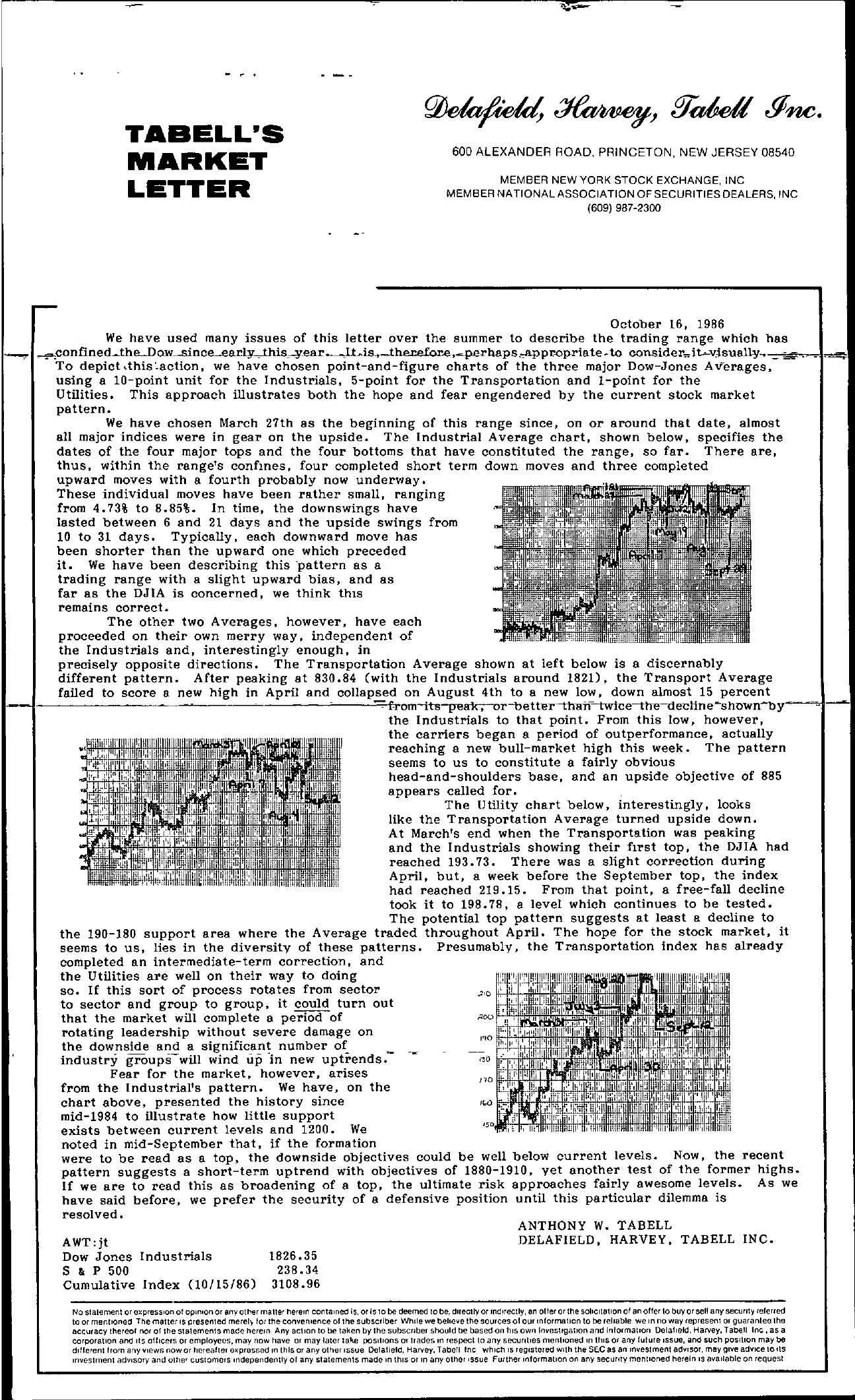 TABELL'S MARKET LETTER 600 ALEXANDER ROAD. PRINCETON. NEW JERSEY 08540 MEMBER NEW YORK STOCK EXCHANGE. INC MEMBER NATIONAL ASSOCIATION OF SECURITIES DEALERS. INC (609) 987-2300 October 16. 1986 We have used many issues of this letter over the summer to describe the trading range which has confinedthELDow-since.-early-ihiS-year.—-J.t…is…-1hexefore.-perhaps.appr.opriate to consider it….vJsually…. . To depictthisaction. we have chosen point-and-figure charts of the three major Dow-Jones Averages. using a 10-point unit for the Industrials. 5-point for the Transportation and I-point for the Utilities. This approach illustrates both the hope and fear engendered by the current stock market pattern. We have chosen March 27th as the beginning of this range since, on or around that date. almost all major indices were in gear on the upside. The Industrial Average chart. shown below, specifies the dates of the four major tops and the four bottoms that have constituted the range. so far. There are, thus. within the range's confInes, four completed short term down moves and three completed upward moves with a fourth probably now underway. These individual moves have been rather small, ranging from 4.73 to 8.85. In time. the downswings have lasted between 6 and 21 days and the upside swings from 10 to 31 days. Typically. each downward move has been shorter than the upward one which preceded it. We have been describing this 'pattern as a trading range with a slight upward bias. and as far as the DJIA is concerned. we think thIS remains correct. The other two Averages. however. have each proceeded on their own merry way, independent of the Industrials and, interestingly enough. in precisely opposite directions. The Transportation Average shown at left below is a discernably different pattern. After peaking at 830.84 (with the Industrials around 1820. the Transport Average failed to score a new high in April and collapsed on August 4th to a new low. down almost 15 percent – from-its-peak;-ur-better-ttmntce-th'e-decllne-shown-by- the Industrials to that point. From this low. however, the carriers began a period of outperformance. actually reaching a new bull-market high this week. The pattern seems to us to constitute a fairly obvious head-and-shoulders base. and an upside objective of 885 appears called for. The Utility chart below. interestingly. looks like the Transportation Average turned upside down. At March's end when the Transportation was peaking and the Industrials showing their flrst top. the DJIA had reached 193.73. There was a slight correction during April. but. a week before the September top. the index had reached 219.15. From that point. a free-fall decline took it to 198.78. a level which continues to be tested. The potential top pattern suggests at least a decline to the 190-180 support area where the Average traded throughout April. The hope for the stock market. it seems to us, lies in the diversity of these patterns. Presumably, the Transportation index has already completed an intermediate-term correction, and the Utilities are well on their way to doing so. If this sort of process rotates from sector I;'\ITI!i! to sector and group to group. it could turn out that the market will complete a period of rotating leadership without severe damage on the downside and a significant number of industry groups-will wind up in new uptrends.- Fear for the market, however, arises from the Industrial's pattern. We have. on the chart above. presented the history since mid-1984 to illustrate how little support exists between current levels and 1200. We noted in mid-September that, if the formation were to be read as a top, the downside objectives could be well below current levels. Now. the recent pattern suggests a short-term uptrend with objectives of 1880-1910. yet another test of the former highs. If we are to read this as broadening of a top. the ultimate risk approaches fairly awesome levels. As we have said before. we prefer the security of a defensive position until this particular dilemma is resolved. ANTHONY W. TABELL AWTjt DELAFIELD. HARVEY. TAB ELL INC. Dow Jones Industrials 1826.35 S & P 500 238.34 Cumulative Index (l0/15/86) 3108.96 No statement or expreSSion of opinion or any other malter herem contained Is, Of Is 10 be deemed to be, directly or indirectly. an of/er or the soliCitation of an offer 10 buy or sell any security referred to or mentlonod The matter IS presented merel fOlthe convenience of Ihesubscrlber White we behcelhe sources 01 our information 10 be reliable we In no way represent or guarantee the accuracy therool nor altha statements made herem Any action to be taken by the subSCriber should be based on hiS own Invesugallon and Informallon Delafield, Harvey. label! Inc, as a corporation and 115 oUlcers Of employees, may now have or may later lal;e poSitions or trades In respect 10 any secUrities mentioned In thiS 01 any future ISSue, and such position may be different Irom any views nowOl heleafter expressed In this or any other Issue Delafield, Harvey, TabeTi Inc which IS registered wllh the SEC as an Investment adVisor, may give adVice lOlls Investment adVISOry and olhe' customers Independently of any sfatemenls made In thiS or In any othor Issue Further Information on any security mentioned herein IS available on request