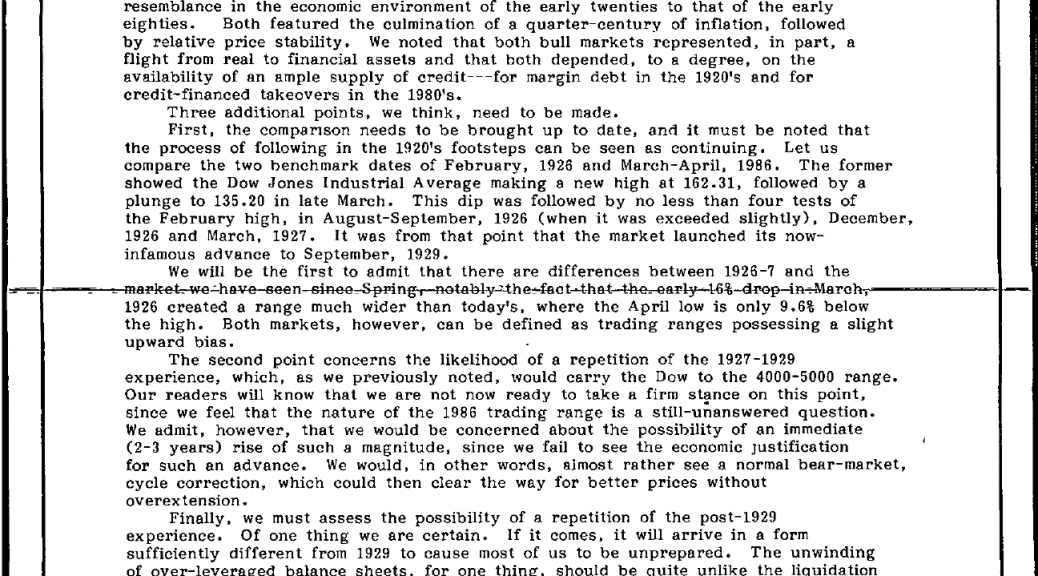 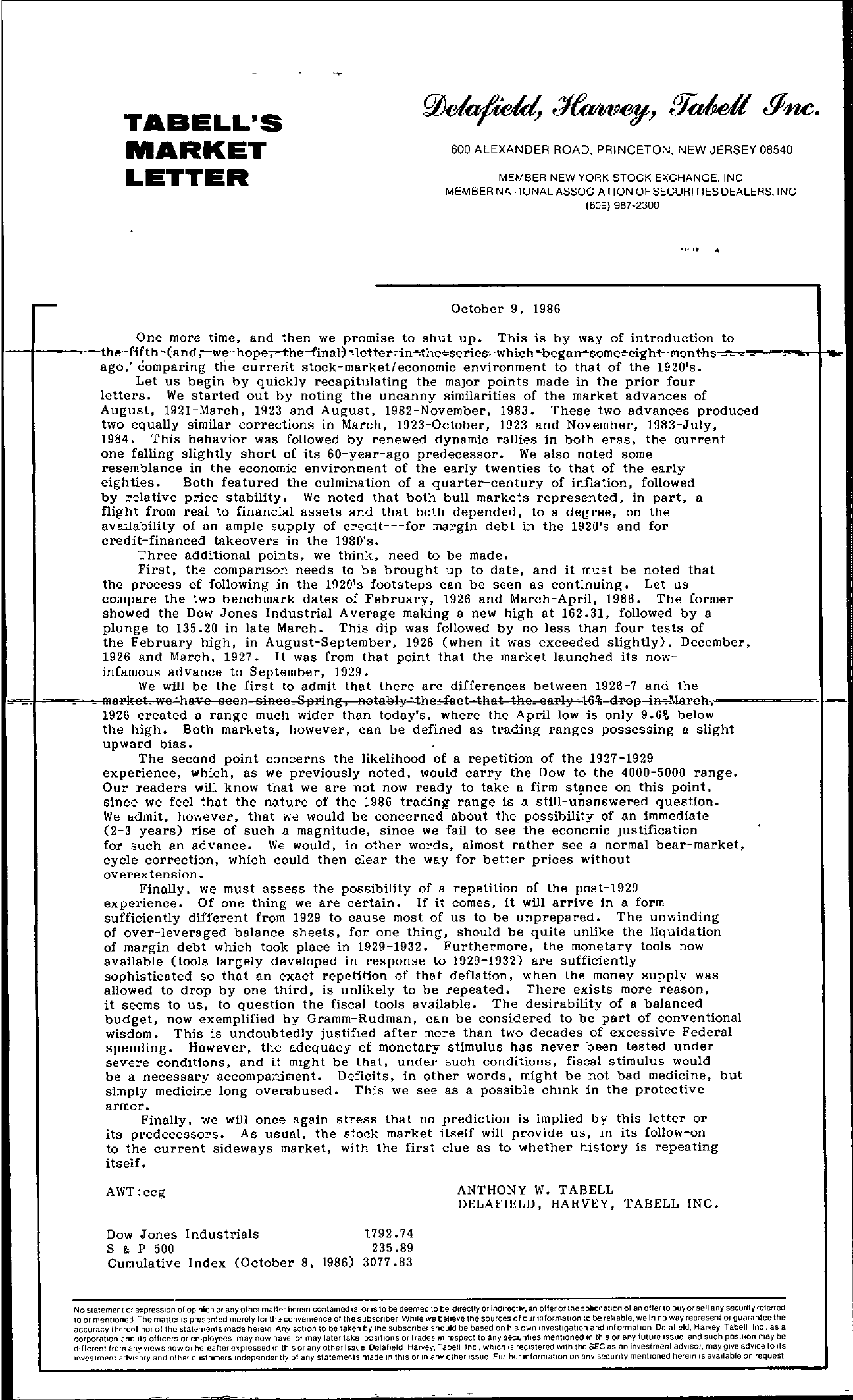 TABELL'S MARKET LETTER 600 ALEXANDER ROAD, PRINCETON, NEW JERSEY 08540 MEMBER NEW YORK STOCK EXCHANGE, INC MEMBER NATIONAL ASSOCIATION OF SECURITIES DEALERS, INC (609) 9872300 , , ' October 9, 1986 One more time, and then we promise to shut up. This is by way of introduction to I-I—-'the-fifth -(and-,we-hopey-the-final)lettero-in'the'serieswhich –began-some,eight-mont-h S–…–.,….,–.,. ago.' comparing tlie currerit stock-market/economic environment to that of the 1920's. Let us begin by quickly recapitulating the major points made in the prior four letters. We started out by noting the uncanny similarities of the market advances of August, 1921-March, 1923 and August, 1982-November, 1983. These two advances produced two equally similar corrections in March, 1923-0ctober, 1923 and November, 1983-July, 1984. This behavior was followed by renewed dynamic rallies in both eras, the current one falling slightly short of its 60-year-ago predecessor. We also noted some resemblance in the economic environment of the early twenties to that of the early eighties. Both featured the culmination of a quarter-century of inflation, followed by relative price stability. We noted that both bull markets represented, in part, a flight from real to financial assets and that both depended, to a degree, on the availability of an ample supply of credit—for margin debt in the 1920's and for credit-financed takeovers in the 1980's. Three additional points, we think, need to be made. First, the companson needs to be brought up to date, and it must be noted that the process of following in the 1920's footsteps can be seen as continuing. Let us compare the two benchmark dates of February, 1926 and March-April, 1986. The former showed the Dow Jones Industrial Average making a new high at 162.31, followed by a plunge to 135.20 in late March. This dip was followed by no less than four tests of the February high, in August-September, 1926 (when it was exceeded slightly), December, 1926 and MarCh, 1927. It was from that point that the market launched its nowinfamous advance to September, 1929. We will be the first to admit that there are differences between 1926-7 and the I—,.e-.-m,,,pl,eL we-'-he-seen—sineeing-,-ntably–'–theact-t-hat–t-he-e'I'ly—16-d1'Op-4n-,-1I\arch-o,—-I– 1926 created a range much wider than today's, where the April low is only 9.6 below the high. Both markets, however, can be defined as trading ranges possessing a slight upward bias. The second point concerns the likelihood of a repetition of the 1927-1929 experience, Which, as we previously noted, would carry the Dow to the 4000-5000 range. Our readers will know that we are not now ready to take a firm stance on this point, since we feel that the nature of the 1986 trading range is a still-unanswered question. We admit, however, that we would be concerned about the possibility of an immediate (2-3 years) rise of such a magnitude, since we fail to see the economic Justification for such an advance. We would, in other words, almost rather see a normal bear-market, cycle correction, which could then clear the way for better prices without overextension. Finally, we must assess the possibility of a repetition of the post-I929 experience. Of one thing we are certain. If it comes. it will arrive in a form sufficiently different from 1929 to cause most of us to be unprepared. The unwinding of over-leveraged balance sheets, for one thing, should be quite unlike the liquidation of margin debt which took place in 1929-1932. Furthermore, the monetary tools now available (tools largely developed in response to 1929-1932) are sufficiently sophisticated so that an exact repetition of that deflation, when the money supply was allowed to drop by one third, is unlikely to be repeated. There exists more reason, it seems to us, to question the fiscal tools available. The desirability of a balanced budget. now exemplified by Gramm-Rudman, can be considered to be part of conventional wisdom. This is undoubtedly justifIed after more than two decades of excessive Federal spending. However, the adequacy of monetary stimulus has never been tested under severe condItions, and it mIght be that, under such conditions, fiscal stimulus would be a necessary accompaniment. Deficits, in other words, might be not bad medicine but simply medicine long overabused. This we see as a possible chInk in the protective armor. Finally, we will once again stress that no prediction is implied by this letter or its predecessors. As usual, the stock market itself will provide us In its follow-on to the current sideways market, with the first clue as to whether history is repeating itself. AWTccg ANTHONY W. TABELL DELAFIELD, HARVEY, TAB ELL INC. Dow Jones Industrials 1792.74 S & P 500 235.89 Cumulative Index (October 8, 1986) 3077.83 NO statement Of expression of opinion or any olher matter herein contalnoo IS or IS to be deemed to be directly or indirect lv, an olfer or the soliCitation 01 an offer to buyor sell any security retorted to or mentioned The matter IS presented merely tor Iheconvcnlencc of the subSCriber While we believe the sources of ourmlormatlon 10 be reliable, we in no way represent or guarantee the accuracy thereof nor ot the statements made herein Any action to be taken by the subSCriber Should be based on his own investigation and information Delafield, Harvey labelt Inc, as a corporation and ItS officers or employeos may now have, or may later take pOSitions or trades In respect to any securities mentioned In thiS or any future Issue, and such poslhon may be dlflerent Irom any VICWS now OJ hClealter cpressed In thiS or any other Issue Delafield Harvey, labelt Inc. which IS registered With the SEC as an Investment adVisor, maYQlve adVice to Its Investment adVisory and o\he' customers Independently of any statements made In thiS or In anv other Issue Further information on any security mentioned herein IS available on request