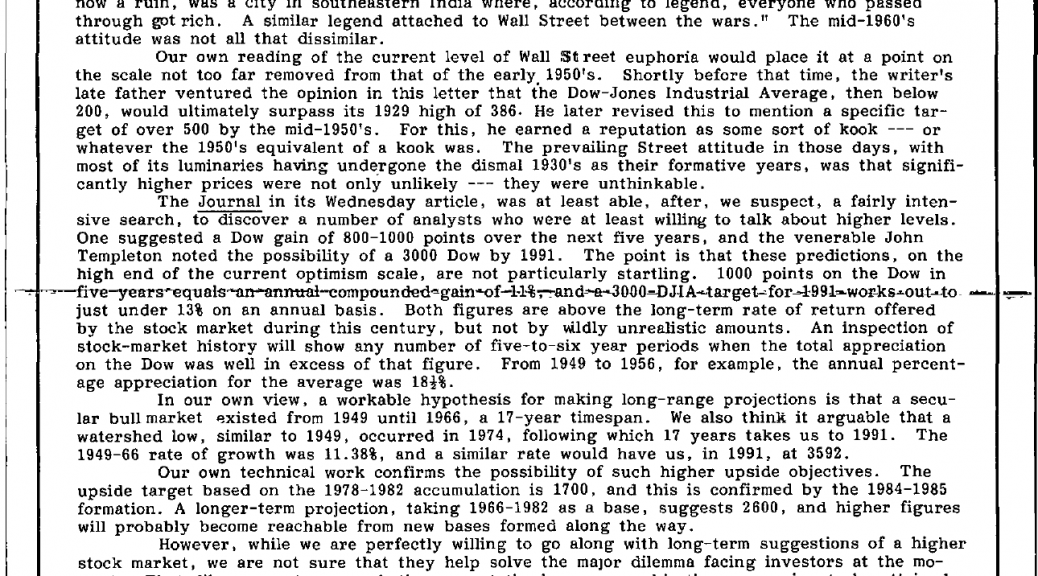 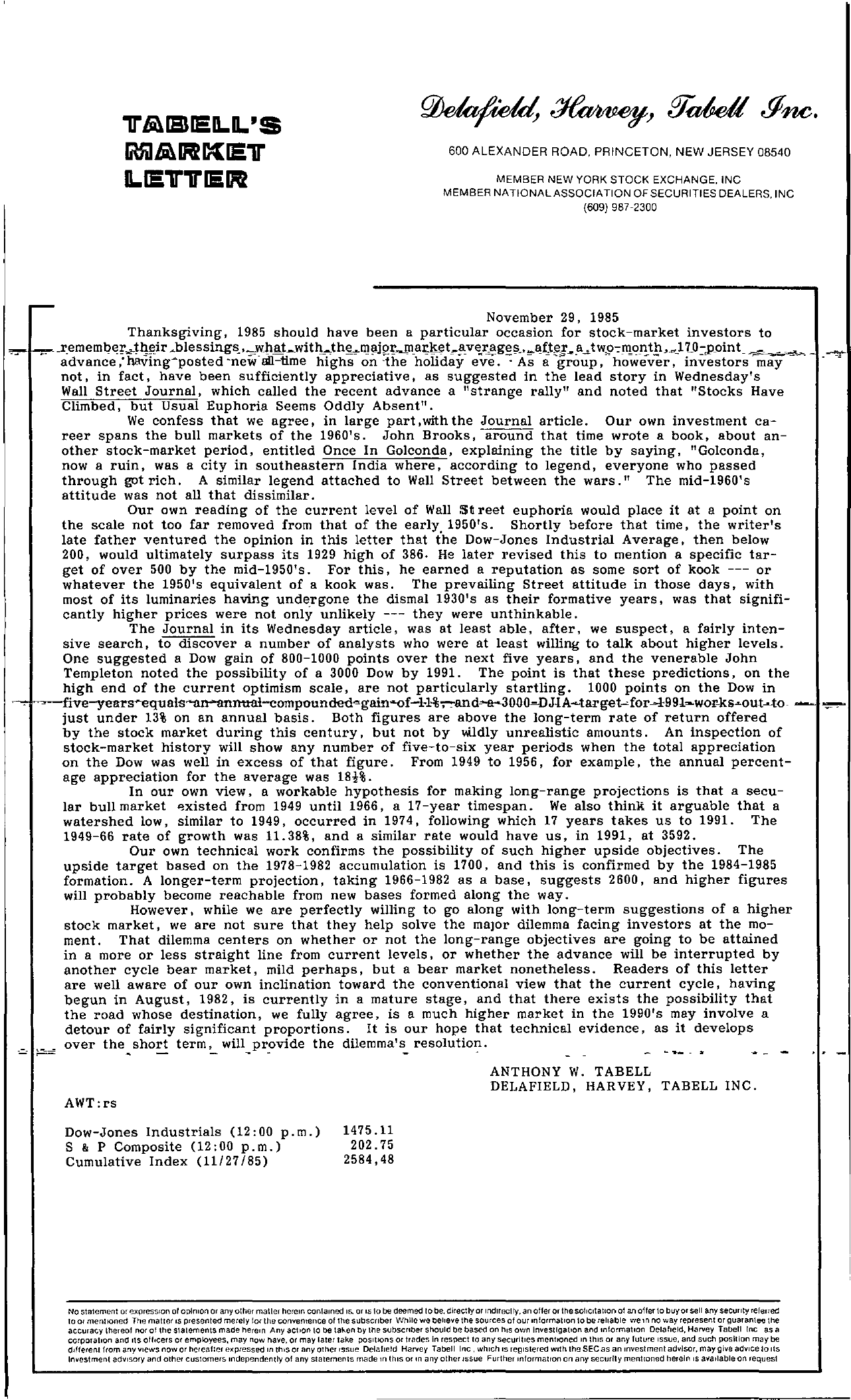 T lii.\BIED..D..' S m1iJlii.\R IET D..lETTIER 600 ALEXANDER ROAD. PRINCETON, NEW JERSEY 08540 MEMBER NEW YORK STOCK EXCHANGE, INC MEMBER NATIONAL ASSOCIATION OF SECURITIES DEALERS,INC (609) 987-2300 November 29, 1985 Thanksgiving, 1985 should have been a particular occasion for stock-market investors to ' temem be!'tir Ablessing ,wJlwitthIIl!ljp',mawt,.lv'l.rgs,,,.af;JatW911!0t!,,J tOp9int . advance;haVingAposted 'newall-time highs on -the holiday eve. 'As a group, however, investors may not, in fact, have been sufficiently appreciative, as suggested in the lead story in Wednesday's Wall Street Journal, which called the recent advance a strange rally and noted that Stocks Have Climbed, but Usual Euphoria Seems Oddly Absent. We confess that we agree, in large part ,with the Journal article. Our own investment ca- reer spans the bull markets of the 1960's. John Brooks, around that time wrote a book, about an- other stock-market period, entitled Once In Golconda, explaining the title by saying, Golconda, now a ruin, was a city in southeastern India where, according to legend, everyone who passed through got rich. A similar legend attached to Wall Street between the wars. The mid-1960's attitude was not all that dissimilar. Our own reading of the current level of Wall lit reet euphoria would place it at a point on the scale not too far removed from that of the early 1950's. Shortly before that time, the writer's late father ventured the opinion in this letter that the Dow-Jones Industrial Average, then below 200, would ultimately surpass its 1929 high of 386. He later revised this to mention a specific tar- get of over 500 by the mid-1950's. For this, he earned a reputation as some sort of kook — or whatever the 1950's equivalent of a kook was. The prevailing Street attitude in those days, with most of its luminaries having undergone the dismal 1930's as their formative years, was that signifi- cantly higher prices were not only unlikely — they were unthinkable. The Journal in its Wednesday article, was at least able, after, we suspect, a fairly inten- sive search, to discover a number of analysts who were at least willing to talk about higher levels. One suggested a Dow gain of 800-1000 points over the next five years, and the venerable John Templeton noted the possibility of a 3000 Dow by 1991. The point is that these predictions, on the high end of the current optimism scale, are not particularly startling. 1000 points on the Dow in –rfive-yenrs-equals-an-annttai-compoundedgainof-H-;-,-and-3000DJ-IA-tal'getfor–l991wol'-ksoutAo. – just under 13 on an annual basis. Both figures are above the long-term rate of return offered by the stock market during this century, but not by wldly unrealistic amounts. An inspection of stock-market history will show any number of five-to-six year periods when the total appreciation on the Dow was well in excess of that figure. From 1949 to 1956, for example, the annual percent- age appreciation for the average was 18!. In our own view, a workable hypothesis for making long-range projections is that a secu- lar bull market 'lxisted from 1949 until 1966, a 17 -year timespan. We also thinK it arguable that a watershed low, similar to 1949, occurred in 1974, following which 17 years takes us to 1991. The 1949-66 rate of growth was 11. 38, and a similar rate would have us, in 1991, at 3592. Our own technical work confirms the possibility of such higher upside objectives. The upside target based on the 1978-1982 accumulation is 1700, and this is confirmed by the 1984-1985 formation. A longer-term projection, taking 1966-1982 as a base, suggests 2600, and higher figures will probably become reachable from new bases formed along the way. However, while we are perfectly willing to go along with long-term suggestions of a higher stock market, we are not sure that they help solve the major dilemma facing investors at the mo- ment. That dilemma centers on whether or not the long-range objectives are going to be attained in a more or less straight line from current levels, or whether the advance will be interrupted by another cycle bear market, mild perhaps, but a bear market nonetheless. Readers of this letter are well aware of our own inclination toward the conventional view that the current cycle, having begun in August, 1982, is currently in a mature stage, and that there exists the possibility that the road whose destination, we fully agree, is a much higher market in the 1990's may involve a detour of fairly significant proportions. It is our hope that technical evidence, as it develops over the short termC. willpr,ovide the dilemma's resolution. . . .,.,.. AWTrs ANTHONY W. TAB ELL DELAFIELD, HARVEY, TABELL INC. Dow-Jones Industrials (12 00 p. m.) S & P Composite (12 00 p. m. ) Cumulative Index (11/27/85) 1475.11 202.75 2584,48 NO statemen or expresSion 01 oplOion or any olher matter herein contained 15. or IS 10 be deemed to be, directly or indirectly. an oller or the sohcltahon 01 an oiler 10 buyor sell any security referred to or mentIOned The matter IS presented merely j() Ihe convemence oj Ihe subscllber While we believe the sources of ourlnlormallon 10 be reliable we In no way represent or guarantee the accuracy thereof nor ollho slatemenlS made herein Any action to be taken by the subSCriber should be based on hIS own Investlgatron and mlormallon Delafield, Harvey Tabell Inc as a corporallon and Its officers or employees, may now have, or may later take poSitIons or trades In respect to any securities menhoned In thiS or any future Issue, and such position may be different/rom any views now or hclealler expressed In thiS or any other Issue Dela/leld Harvey Tabell Inc, which IS registered With the SECas an Iflveslmenl advisor, may give adVice to 115 Investment adVISOry and other customers Independently 0/ any statements made m thiS or In any other Issue Further mformatlon on any security menl!oned herein IS available on request