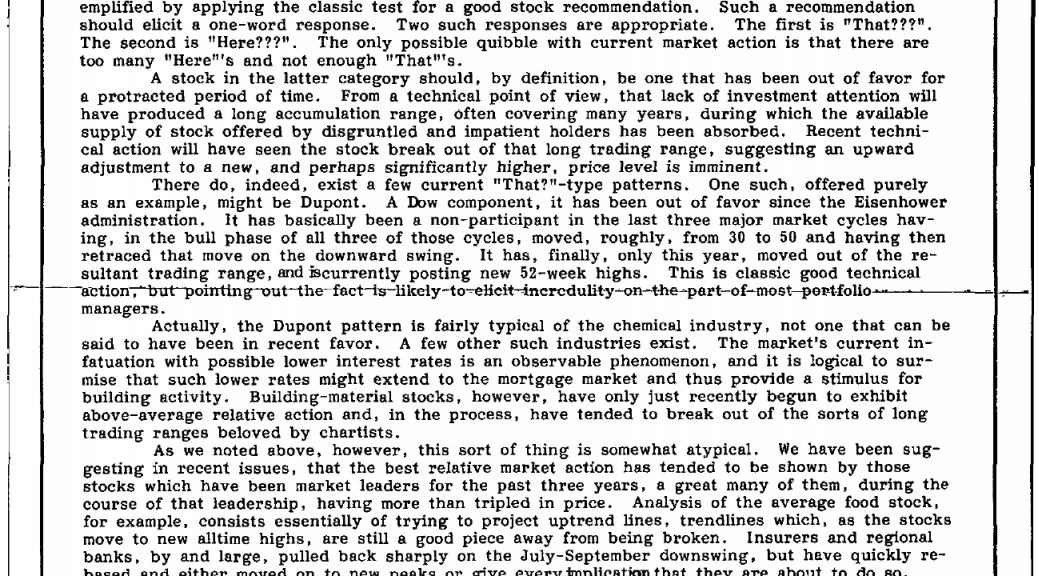 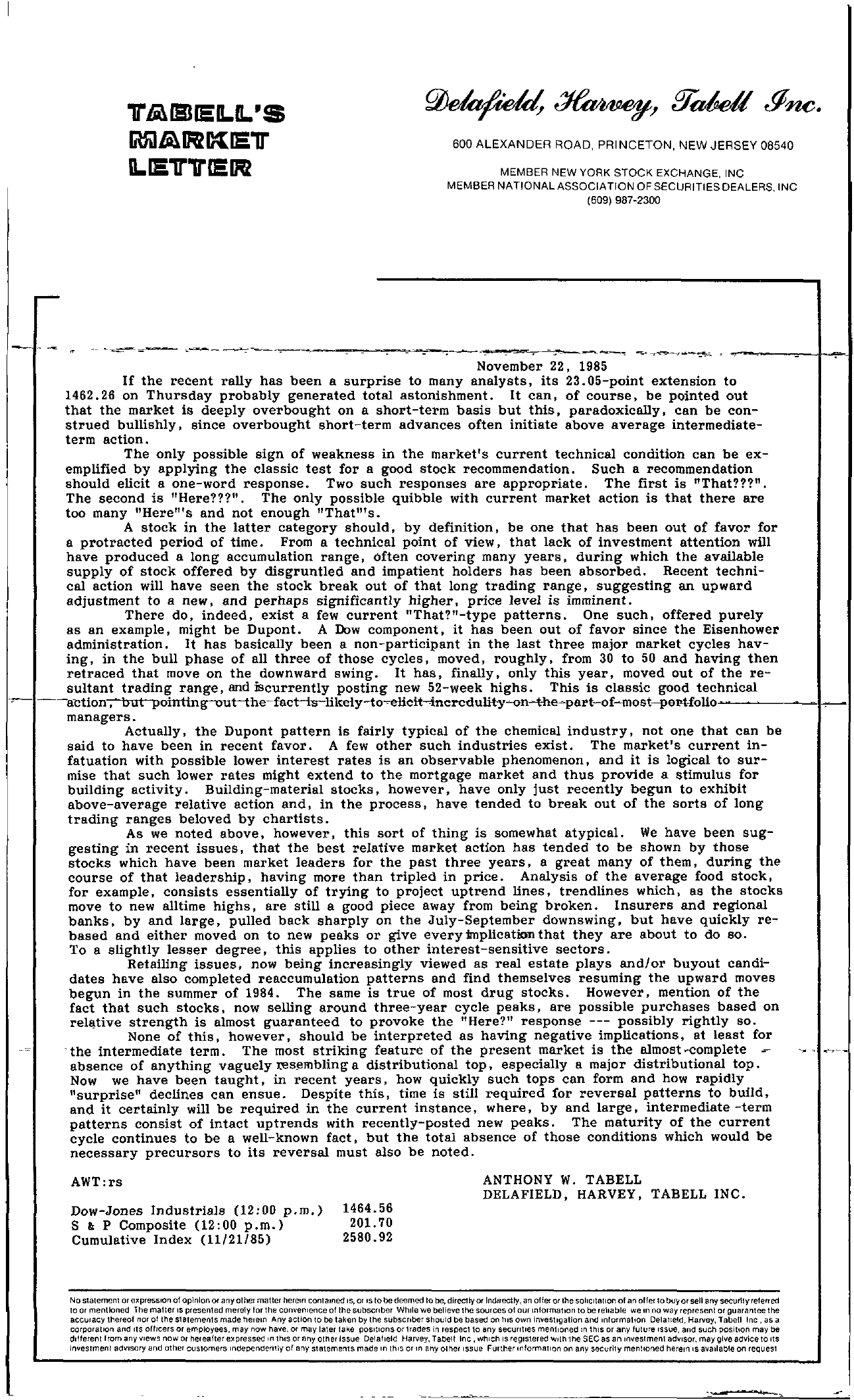 V&.\ IBHELL' SiB &'\RIE'1J' IL.1E'1J''1J'IER 600 ALEXANDER ROAD, PRI NCETON, NEW JERSEY 08540 MEMBER NEW YORK STOCK EXCHANGE, INC MEMBER NATIONAL ASSOCIATION OF SECURITIES DEALERS, INC (609) 9872300 November 22, 1985 If the recent rally has been a surprise to many analysts, its 23. OS-point extension to 1462.26 on Thursday probably generated total astonishment. It can, of course, be pointed out that the market is deeply overbought on a short-term basis but this, paradoxically, can be con- strued bullishly, since overbought short-term advances often initiate above average intermediate- term action. The only possible sign of weakness in the market's current technical condition can be ex- emplified by applying the classic test for a good stock recommendation. Such a recommendation should elicit a one-word response. Two such responses are appropriate. The first is That. The second is Here. The only possible quibble with current market action is that there are too many Here1lls and not enough Thatllts. A stock in the latter category should, by definition, be one that has been out of favor for a protracted period of time. From a technical point of view, that lack of investment attention will have produced a long accumulation range, often covering many years, during which the available supply of stock offered by disgruntled and impatient holders has been absorbed. Recent technI- cal action will have seen the stock break out of that long trading range, suggesting an upward adjustment to a new, and perhaps significantly higher, price level is imminent. There do, indeed, exist a few current That-type patterns. One such, offered purely as an example, might be Dupont. A Dow component, it has been out of favor since the Eisenhower administration. It has basically been a non-participant in the last three major market cycles hav- ing, in the bull phase of all three of those cycles, moved, roughly, from 30 to 50 and having then retraced that move on the downward swing. It has, finally, only this year, moved out of the re- sultant trading range, and iScurrently posting new 52-week highs. This is classic good technical – . – –antlon-;4Juttointlng-uuHhe-facHs-likely-to-elieit-ineredulit-yon–thepart-of-most-pept-f()lio—–I managers. Actually, the Dupont pattern is fairly typical of the chemical industry, not one that can be said to have been in recent favor. A few other such industries exist. The market's current in- fatuation with possible lower interest rates is an observable phenomenon, and it is logical to sur- mise that such lower rates might extend to the mortgage market and thus provide a stimulus for building activity. Building-material stocks, however, have only just recently begun to exhibit above-average relative action and, in the process, have tended to break out of the sorts of long trading ranges beloved by chartists. As we noted above, however, this sort of thing is somewhat atypical. We have been sug- gesting in recent issues, that the best relative market action has tended to be shown by those stocks which have been market leaders for the past three years, a great many of them, during the course of that leadership, having more than tripled in price. Analysis of the average food stock, for example, consists essentially of trying to project uptrend lines, trendlines which, as the stocks move to new alltime highs, are still a good piece away from being broken. Insurers and regional banks, by and large, pulled back sharply on the July-September downswing, but have quickly re- based and either moved on to new peaks or give every implication that they are about to do so. To a slightly lesser degree, this applies to other interest-sensitive sectors. Retailing issues, now being increasingly viewed as real estate plays and/or buyout candi- dates have also completed reaccumulation patterns and find themselves resuming the upward moves begun in the summer of 1984. The same is true of most drug stocks. However, mention of the fact that such stocks, now selling around three-year cycle peaks, are possible purchases based on relative strength is almost guaranteed to provoke the Here response — possibly rightly so. None of this, however, should be interpreted as having negative implications, at least for -the intermediate term. The most striking feature of the present market is the almost .complete – — absence of anything vaguely resl'mbling a distributional top, especially a major distributional top. Now we have been taught, in recent years, how quickly such tops can form and how rapidly surprise declines can ensue. Despite this, time is still required for reversal patterns to build, and it certainly will be required in the current instance, where, by and large, intermediate -term patterns consist of intact uptrends with recently-posted new peaks. The maturity of the current cycle continues to be a well-known fact, but the total absence of those conditions which would be necessary precursors to its reversal must also be noted. AWTrs Dow-Jones Industrials (1200 p.m.) S & P Composite (1200 p.m.) Cumulative Index (11/21185) 1464.56 201. 70 2580.92 ANTHONY W. TABELL DELAFIELD, HARVEY, TABELL INC. NO statement or expreSSion of opinion or any other matter herein contained IS, or IS to be deemed to be, directly or Indirectly, an offer or the soliCitation of an offer to buyor sell any securUy referred to or mentioned The maIler IS presented merely forthe convenience of the subSCriber While we believe the sources 01 our information to be reliable we In no way represent or guarantee the accuracy thereof nor of the statements made herein Any action to be taken by the subSCriber should be based on hiS own Investigation and In!ormatton Delal1eld, Harvey, Tabell Inc, as a corporation and ItS officers or employees, may now have, or may later lak.e pOSitions or trades In respect to any securities mentioned In thiS or any future Issue, and such posl\!on may be dllfefent from any views now or heleaftere)(pressed In thiS or any other Issue Delafield Harvey, Tabell Inc, which IS registered With the SECas an Investment adVisor, may give advice 10 lIS Investmenl adVISOry and other customers Independently of any statements made In thiS or m any other Issue Further mformatlon on any security mentioned herem IS available on reQuest