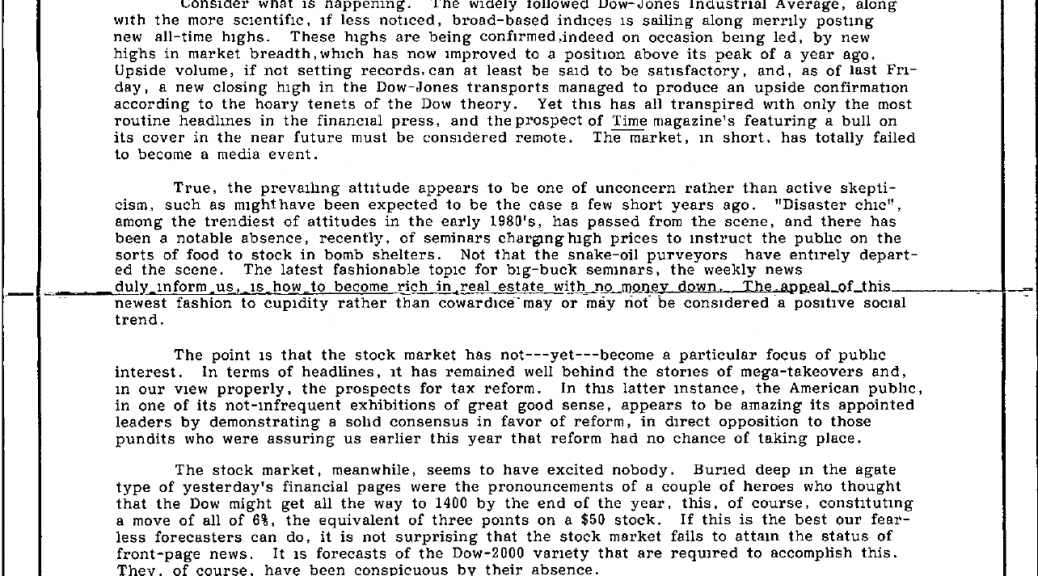 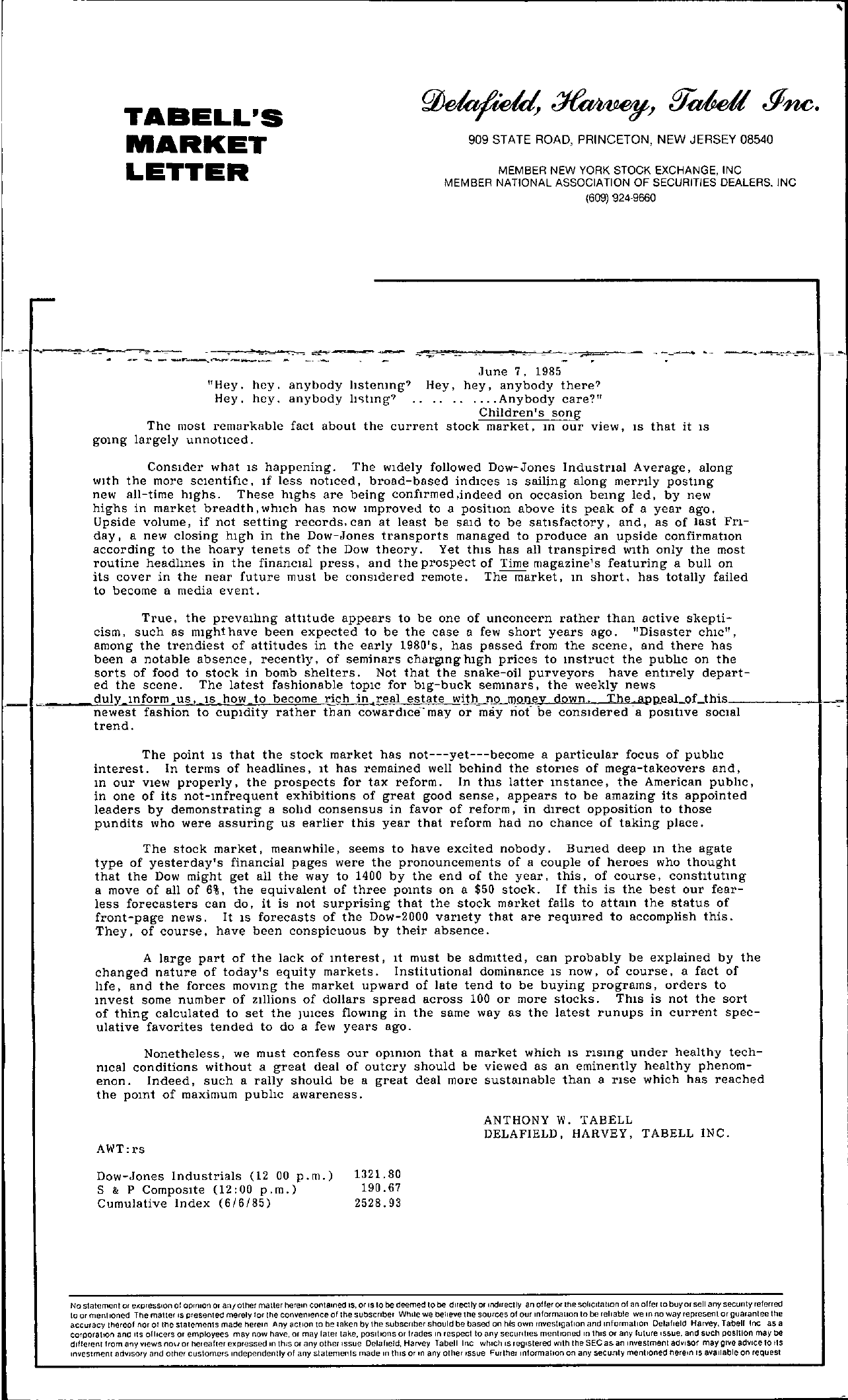 . TABELL'S MARKET LETTER 909 STATE ROAD, PRINCETON, NEW JERSEY 08540 MEMBER NEW YORK STOCK EXCHANGE. INC MEMBER NATIONAL ASSOCIATION OF SECURITIES DEALERS. INC (609) 9249660 – June 7. 1985 Hey. hey. anybody IIstenmg Hey. hey. anybody there Hey. hey. anybody lIc;tIng ………. Anybody care!! Children's song The most remarkable fact about the current stock market. In our view, IS that it IS gomg largely unnotIced. ConSIder what IS happening. The WIdely followed Dow-Jones IndustrIal Average. along WIth the more sCIentiflC. If less notIced, broad-based indIces IS sailing along merrIly postIng newall-time hIghs. These hIghs are being confIrmed,indeed on occasion beIng led, by new highs in market breadth, WhICh has now Improved to a positIon above its peak of a year ago. Upside volume. if not setting records. can at least be saId to be satisfactory. and. as of last Frlday, a new closing hIgh in the Dow-Jones transports managed to produce an upside confirmahon according to the hoary tenets of the Dow theory. Yet thIS has all transpired WIth only the most routine headhnes in the finanCIal press, and the prospect of Time magazine' s featuring a bull on its cover in the near future must be conSIdered remote. The market, In short. has totally failed to become a media event. True. the prevaIlIng attItude appears to be one of unconcern rather than active skepticism, such as Imght have been expected to be the case a few short years ago. !!Disaster ChIC n among the trendiest of attitudes in the early 1980 ' s, has passed from the scene, and there has been a notable absence, recently, of seminars charglng hIgh prices to Instruct the publIc on the sorts of food to stock in bomb shelters. Not that the snake-oil purveyors have entIrely departed the scene. The latest fashionable tOPlC for blg-buck semInars. the weekly news ,dcu.l.,y mform us, IS how to become rich in real estate with n!Ll1)Q,Il.ey down. Theapl.l-ealofthisI newest fashion to cupIdity rather than cowardlce– mayor may riof be conSIdered -a posItIve SOCIal trend. The point IS that the stock market has not—yet—become a particular focus of pubbc interest. In terms of headlines, It has remained well behind the storIes of mega-takeovers and. In our VIew properly. the prospects for tax reform. In thIS latter Instance, the American publIc. in one of its not-Infrequent exhibitions of great good sense. appears to be amazing its appointed leaders by demonstrating a solId consensus in favor of reform, in dIrect opposition to those pundits who were assuring us earlier this year that reform had no chance of taking place. The stock market. meanwhile, seems to have excited nobody. Burled deep In the agate type of yesterday's financial pages were the pronouncements of a couple of heroes who thought that the Dow might get all the way to 1400 by the end of the year, this, of course. conslltutmg a move of all of 6. the equivalent of three pOInts on a 50 stock. If this is the best our fearless forecasters can do. it is not surprising that the stock market fails to attaIn the status of front-page news. It IS forecasts of the Dow-2000 varIety that are reqUIred to accomplish this. They. of course. have been conspicuous by their absence. A large part of the lack of Interest. It must be admItted. can probably be explained by the changed nature of today's equity markets. Institutional dominance IS now. of course. a fact of hfe I and the forces mOVIng the market upward of late tend to be buying programs. orders to Invest some number of ZIllions of dollars spread across 100 or more stocks. ThIS is not the sort of thing calculated to set the JUIces flOWIng in the same way as the latest runups in current speculative favorites tended to do a few years ago. Nonetheless. we must confess our OpInIOn that a market which IS rISIng under healthy technIcal conditions without a great deal of outcry should be viewed as an eminently healthy phenomenon. Indeed. such a rally should be a great deal more sustaInable than a rIse which has reached the pOInt of maximum publIc awareness. AWTrs ANTHONY W. TABELL DELAFIELD, HARVEY, TABELL INC. Dow-Jones Industrials (12 00 p. m.) S & P CompOSIte (1200 p.m.) Cumulative Index (6/6/85) 1321. 80 190.67 2528.93 NO statement or e..oresslon 01 opinion or ani other matter herem contained IS, or IS to be deemed to be drreclly or indirectly an oHer or the soliCitation of an offer (0 buyor sell any secunty referred to or mentioned The matter IS plesented merely for the convenrence of the subscriber While we believe the sources of our mformallon to be reliable we In no way represent or guarantee the accuracy thereof nor of the statements made herein Any action to be laken by the subscrrner should be based on his own investIgatIon and information Delafield Harvey, Tabell Inc as a corporahon and Its oilicers or employees may now have, or may later take, poSitions or trades In respect to coy secuntles mentIOned In thiS or any future Issue, and such posilion may be dlfleren\ from any views nOli or t18leai!el expressed In thiS or any other issue DeI81Ie!d, Harvey Tabell Inc which IS registered With the SECas an Investment adVisor may gIve advice to ItS Investment adVisory and other customers Independently of any statemerlts made In thIS or m any other Issue Further mformatlon on any secunty mentioned herein IS avaIlable on request