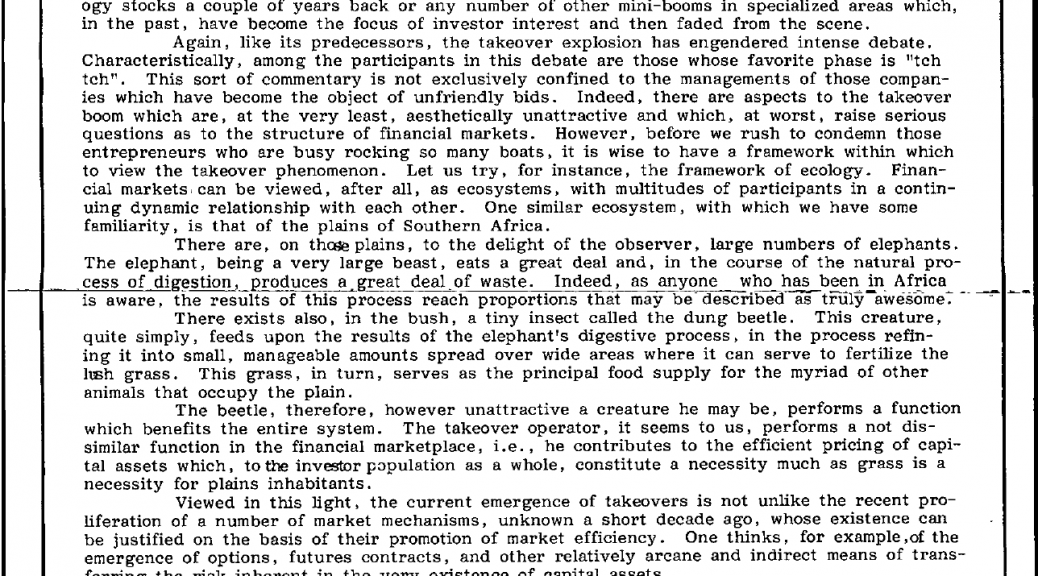 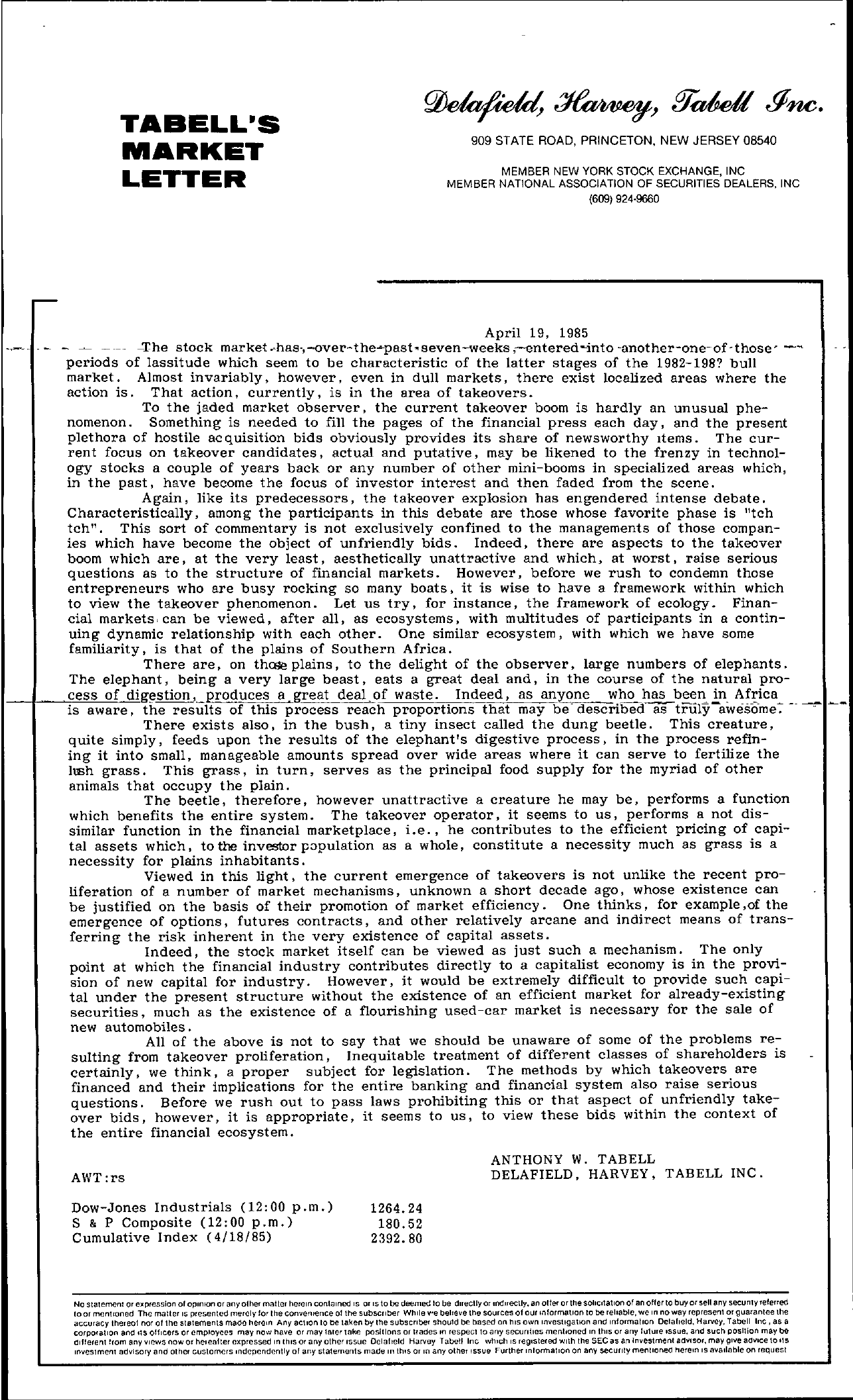 TABELL'S MARKET LETTER 909 STATE ROAD, PRINCETON, NEW JERSEY 08540 MEMBER NEW YORK STOCK EXCHANGE, INC MEMBER NATIONAL ASSOCIATION OF SECURITIES DEALERS, INC (609) 9249660 April 19, 1985 – – .-. -The stock market -has.. -over-thepast. seven-weeks ,-entered -into -another-one-of those – periods of lassitude which seem to be characteristic of the latter stages of the 1982-198 bull market. Almost invariably, however, even in dull markets, there exist localized areas where the action is, That action, currently, is in the area of takeovers, To the jaded market observer, the current takeover boom is hardly an unusual phenomenon. Something is needed to fill the pages of the financial press each day, and the present plethora of hostile ac quisition bids obviously provides its share of newsworthy Items. The current focus on takeover candidates, actual and putative, may be likened to the frenzy in technology stocks a couple of years back or any number of other mini-booms in specialized areas whiCh, in the past, have become the focus of investor interest and then faded from the scene, Again, like its predecessors, the takeover explosion has engendered intense debate, Characteristically, among the participants in this debate are those whose favorite phase is tch tch, This sort of commentary is not exclusively confined to the managements of those companies which have become the object of unfriendly bids. Indeed, there are aspects to the takeover boom which are, at the very least, aesthetically unattractive and which, at worst, raise serious questions as to the structure of financial markets, However, before we rush to condemn those entrepreneurs who are busy rocking so many boats, it is wise to have a framework within which to view the takeover phenomenon. Let us try, for instance, the framework of ecology. Financial markets, can be viewed, after all, as ecosystems, with multitudes of participants in a continuing dynamic relationship with each other. One similar ecosystem, with which we have some familiarity, is that of the plains of Southern Africa. There are, on thOle plains, to the delight of the observer, large numbers of elephants. The elephant, being a very large beast, eats a great deal and, in the course of the natural pro- cess of digestion, rroduces a gI'eat deal.of waste. Indeed, as anyone who has been in Africa is aware, the results of this process reach proportions that may be' described-aEtruly-aweso'me -. There exists also, in the bush, a tiny insect called the dung beetle, This creature, quite simply, feeds upon the results of the elephant's digestive process, in the process refining it into small, manageable amounts spread over wide areas where it can serve to fertilize the Imh grass. This grass, in turn, serves as the principal food supply for the myriad of other animals that occupy the plain, The beetle, therefore, however unattractive a creature he may be, performs a function which benefits the entire system. The takeover operator, it seems to us, performs a not dissimilar function in the financial marketplace, i.e., he contributes to the efficient pricing of capital assets which, to the investor ppulation as a whole, constitute a necessity much as grass is a necessity for plains inhabitants, Viewed in this light, the current emergence of takeovers is not unlike the recent proliferation of a number of market mechanisms, unknown a short decade ago, whose existence can be justified on the basis of their promotion of market efficiency. One thinks, for example ,of the emergence of options, futures contracts, and other relatively arcane and indirect means of trans- ferring the risk inherent in the very existence of capital assets. Indeed, the stock market itself can be viewed as just such a mechanism, The only point at which the financial industry contributes directly to a capitalist economy is in the provision of new capital for industry. However, it would be extremely difficult to provide such capital under the present structure without the existence of an efficient market for already-existing securities, much as the existence of a flourishing used-car market is necessary for the sale of new automobiles. All of the above is not to say that we should be unaware of some of the problems re- sulting from takeover proliferation, Inequitable treatment of different classes of shareholders is certainly, we think, a proper subject for legislation. The methods by which takeovers are financed and their implications for the entire banking and financial system also raise serious questions, Before we rush out to pass laws prohibiting this or that aspect of unfriendly takeover bids J however J it is appropriate, it seems to us, to view these bids within the context of the entire financial ecosystem. AWTrs ANTHONY W. TABELL DELAFIELD, HARVEY, TAB ELL INC. Dow-Jones Industrials (1200 p.m.) S & P Composite (1200 p.m.) Cumulative Index (4/18/85) 1264.24 180.52 2392.80 No statement or epresslon of opinIOn or any other matter herein contained IS or IS to be deemed 10 be directly or mdlrectly, an offer or the soliCitation of an offer to buy or sell any secunty relerred toor mentioned The malter IS presented merely lor Ihe convenience of the subscriber While 'oe believe the sources of our information to be reliable, we In noway represent orguarantae the accuracy thereof nor of the statements made herem Any action 10 be taken by Ihe subSCriber should be based on hiS own Invesllgallon and Informal Ion Delafield, Harvey, labell Inc, as a corporation and Its oHlcers or employees may now have or may tater take positions or trades In respeclto any secuntles menltoned In thiS or any luture Issue, and such position may be different tram any views now or heleafter expressed m thiS or any other Issue Detafletd Harvey Tabe!! Inc which IS registered With the SECas an Investment adVisor, may give adVice to Its Investment advisory and other customers Independently of any statements made In thiS or m any other Issue Further mfonnatlon on any security mentioned herem IS available on request