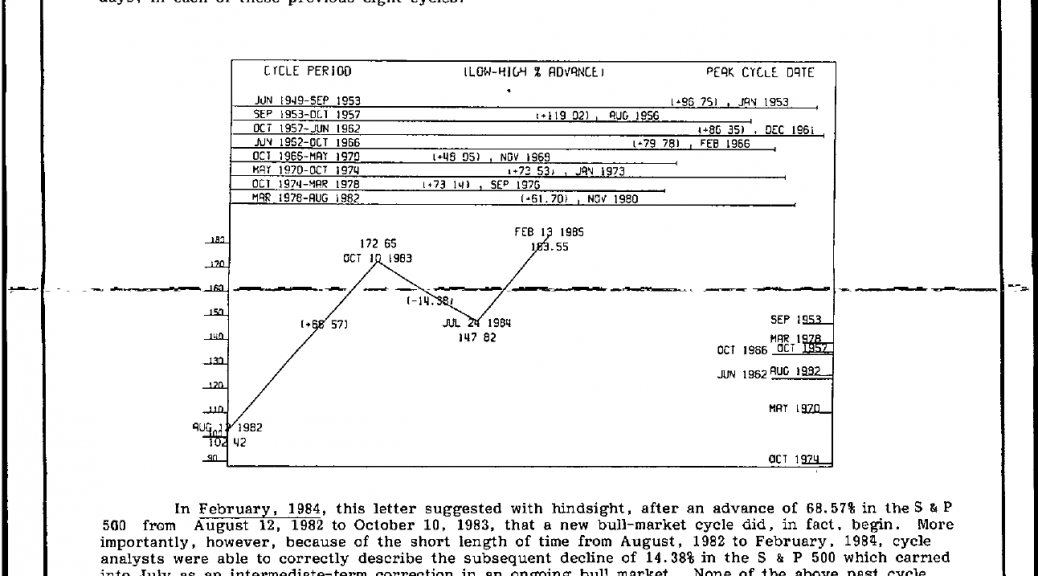 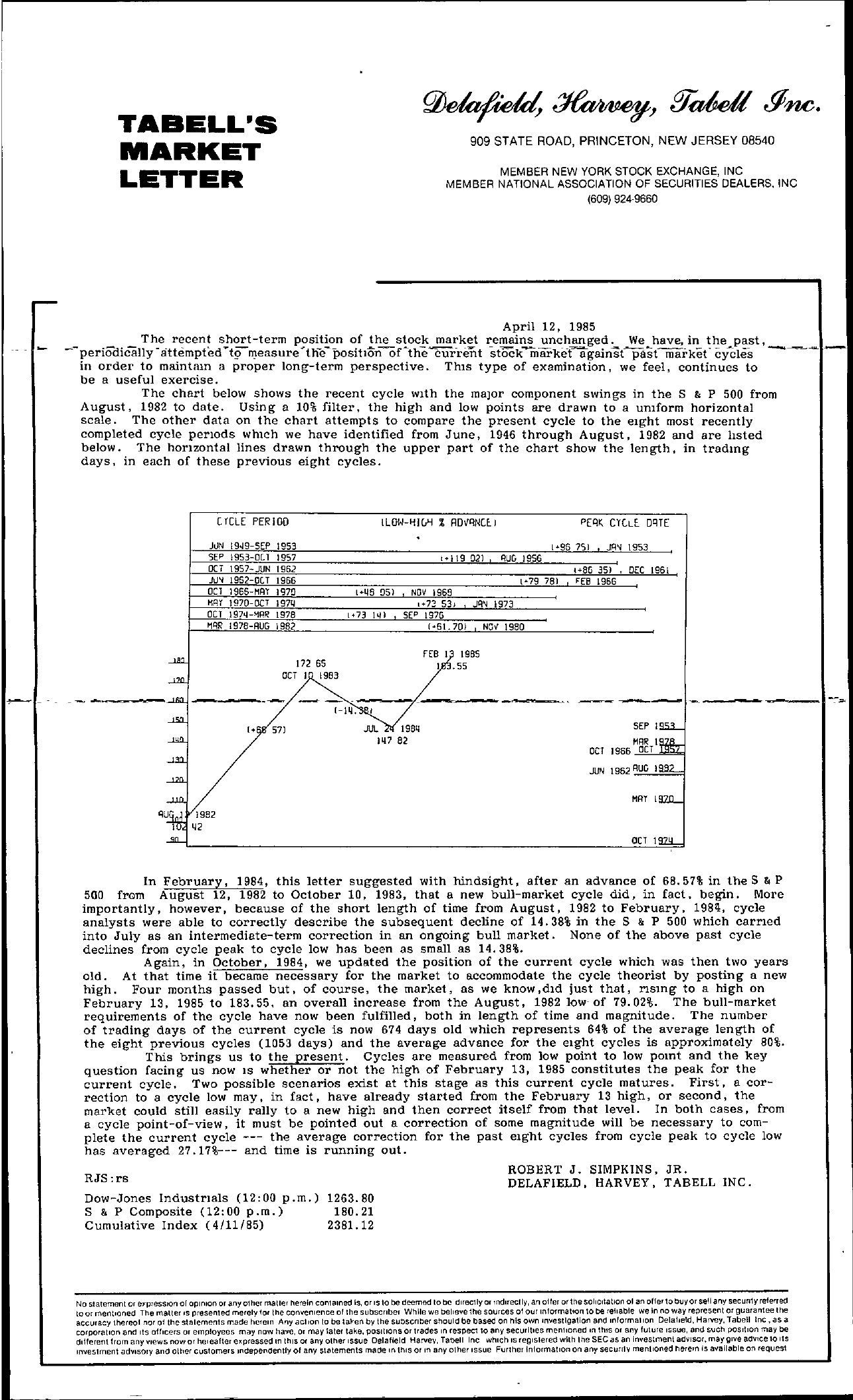 TABELL'S MARKET LETTER 909 STATE ROAD, PRINCETON, NEW JERSEY 08540 MEMBER NEW YORK STOCK EXCHANGE, INC MEMBER NATIONAL ASSOCIATION OF SECURITIES DEALERS. INC (609) 924-9660 April 12, 1985 The rcen! sht-term position of the stoc! market r.emains uncha!lged. We have, in the past. CUr-rent cycles ————-perioaically -attempted .. t9 r1easurethe-positIonor-the stOckriiarketagmnsfpast market' in order to maintmn 3 proper long-term perspective. ThIS type of examination, we feel, continues to be a useful exercise. The chart below shows the recent cycle wIth the maJor component swings in the S & P 500 from August, 1982 to date. Using a 10 filter, the high and low points are drawn to a unIform horizontal scale. The other data on the chart attempts to compare the present cycle to the eIght most recently completed cycle perlods WhICh we have identified from June, 1946 through August. 1982 and are lIsted below. The horIzontal lines drawn through the upper part of the chart show the length. in tradmg days. in each of these previous eight cycles. crCLE PERIOD 172 65 OCT 1983 FEB 19B5 55 c. \. JUL 19811 11I7 82 OCT JUN In February, 1984, this letter suggested with hindsight, after an advance of 68.57 in the S &I P 500 from August 12, 1982 to October 10, 1983, that a new bull-market cycle did, in fact. begin. More importantly, however. because of the short length of time from August, 1982 to February, 198ij cycle analysts were able to correctly describe the subsequent decline of 14.38 in the S &; P 500 which carrIed into July as an intermediate-term correction in an ongoing bull market. None of the above past cycle declines from cycle peak to cycle low has been as small as 14.38. Again, in October, 1984. we updated the position of the current cycle which was then two years old. At that time it became necessary for the market to accommodate the cycle theorist by posting a new high. Four months passed but. of course, the market, as we know,dld just that, rISIng to a high on February 13, 1985 to 183.55. an overall increase from the August, 1982 low- of 79.02. The bull-market requirements of the cycle have now been fulfilled, both in length of time and magnitude. The number of trading days of the current cycle is now 674 days old which represents 64 of the average length of the eight previous cycles (1053 days) and the average advance for the eIght cycles is approximately 80. This brings us to the present. Cycles are measured from low point to low pomt and the key question facing us now IS whether or not the high of February 13, 1985 constitutes the peak for the current cycle. Two possible scenarios exist at this stage as this current cycle matures. First. a correction to a cycle low may, in fact. have already started from the February 13 high, or second. the market could still easily rally to a new high and then correct itself from that level. In both cases. from a cycle point-of-view, it must be pointed out a correction of some magnitude will be necessary to complete the current cycle — the average correction for the past eIght cycles from cycle peak to cycle low has averaged 27.17— and time is running out. RJS rs Dow-Jones IndustrIals (1200 p.m.) 1263.80 S & P Composite (1200 p.m.) 180.21 Cumulative Index (4/11/85) 2381.12 ROBERT J. SIMPKINS, JR. DELAFIELD, HARVEY, TABELL INC. NO statement or eJfpreSSlon 01 opinion or any other matter herein contained Is, or IS to be deemed to be directly or Indirectly, an otter or the soliCitation of an oHer to buyor sell any secunly referred toor mentioned The matter IS presented meralylor the conlfenience of the subscriber While we believelhe sources 01 our Informallon 10 be reliable we In no way represent or guaranlee the accuracy thereof nor at the stalements made herOin Any action 10 be la;-en by the subscriber should be based on his own investigation and mformatlon Delafield, Harvey, labell Inc, as a corporaflon and Its officers or employees may now have, or may later take, POSitions or trades In resPect to any securihes mentioned m thiS or any future Issue, and such POSition may be dillerent from any views now or helcaftcr expressed In thiS or any olher Issue Delafield Harvev, labell Inc which IS registered with Ihe SECas an Investment adVisor, may give adVice 10 liS Investment adVisory and other customers Independently of any slatemfnts made m thiS or In any olher Issue Further Information on any securltv menlloned herem Is available on request