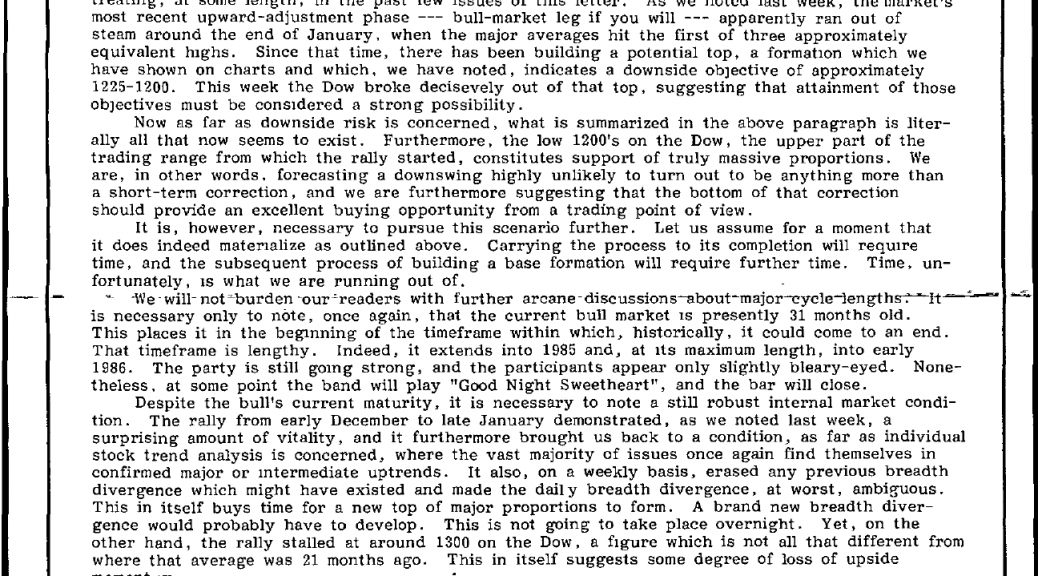 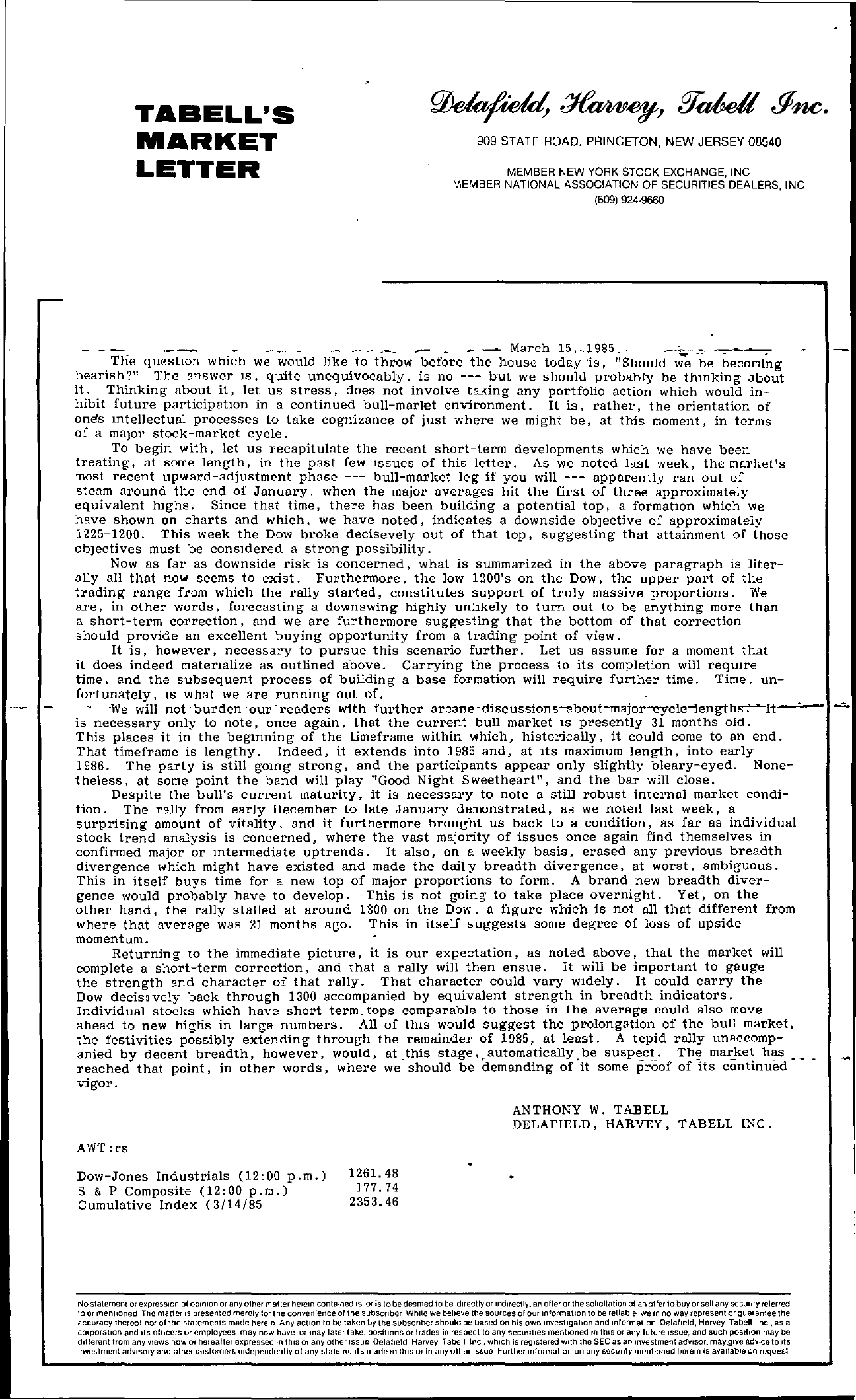 TABELL'S MARKET LETTER 909 STATE ROAD. PRINCETON, NEW JERSEY 08540 MEMBER NEW YORK STOCK EXCHANGE, INC MEMBER NATIONAL ASSOCIATION OF SECURITIES DEALERS, INC (609) 9249660 .- ….. …– March15,.-.1985- – Tile questlOn which we would like to throw before the house today 'is, Should we be becoming bearish1! The answer IS. quite unequivDcably. is no — but we should probably be thInking about it. Thinking about it, let us stress. does not involve taking any portfolio action which would in- hibit future participatlOn in a continued bull-morlet environment. It is, rather, the orientation of one's Intellectual processes to take cognizance of just where we might be. at this moment, in terms of a major stock-markct cycle. To begin with, let us recapitulnte the recent short-term developments which we have been treating, at some length. in the past few Issues of this letter. As we noted last week, the market 1s most recent upward-adjustment phase — bull-market leg if you will — apparently ran out of steam around the end of January, when the major averages hit the first of three approximately equivalent hIghs. Since that time, there has been building a potential top, a formatIon which we have shown on charts and which. we have noted, indicates a downside obJective of approximately 1225-1200. This week the Dow broke decisevely out of that top, suggesting that attainment of those objectives must be conSIdered a stron g possibility. Now as far as downside risk is concerned, what is summarized in the above paragraph is liter- ally all that now seems to exist, Furthermore, the low 1200's on the Dow, the upper part of the trading range from which the rally started, constitutes support of truly massive proportions. We are, in other words. forecasting a downswing highly unlikely to turn out to be anything more than a short-term correction. and we are furthermore suggesting that the bottom of that correction should provide an excellent buying opportunity from a trading point of view, It is, however. necessary to pursue this scenario further. Let us assume for a moment that it does indeed mater18lize as outlined above. Carrying the process to its completion will reqUIre time, and the subsequent process of building a base formation will require further time. Time, un- fortunately, IS what we are running out of. -We -will- not –burden -our–readers with further arcane – discussions–about-major—-cycle-lengths——-It–'- is necessary only to note, once again, that the current bull market IS presently 31 months old. This places it in the begInning of the timeframe within which, historically, it could come to an end. That time frame is lengthy, Indeed, it extends into 1985 and, at ItS maximum length, into early 1986. The party is still gomg strong, and the participants appear only slightly bleary-eyed. None- theless. at some point the band will play Good Night Sweetheart, and the bar will close. Despite the bull's current maturity, it is necessary to note a still robust internal market condi- tion. The rally from early December to late January demonstrated, as we noted last week, a surprising amount of vitality, and it furthermore brought us back to a condition, as far as individual stock trend analysis is concerned where the vast majority of issues once again find themselves in confirmed major or Intermediate up trends . It also, on a weekly basis .. erased any previous breadth divergence which might have existed and made the daiI y breadth divergence, at worst, ambig-uous. This in itself buys time for a new top of major proportions to form. A brand new breadth diver- gence would probably have to develop. This is not going to take place overnight. Yet, on the other hand, the rally stalled at around 1300 on the Dow, a fIgure which is not all that different from where that average was 21 months ago. This in itself suggests some degree of loss of upside momentum. Returning to the immediate picture. it is our expectation. as noted above, that the market will complete a short-term correction, and that a rally will then ensue. It will be important to gauge the strength and character of that rally. That character could vary WIdely. It could carry the Dow decis, vely back through 1300 accompanied by equivalent strength in breadth indicators, Individ ual stocks which have short term tops comparable to those in the average could also move ahead to new highs in large numbers. All of thIS would suggest the prolongation of the bull market, the festivities possibly extending through the remainder of 1985, at least. A tepid rally unaccompanied by decent breadth, however, would, at this stage,.automaticallY,be suspeet. The mal'ket h reached that point, in other words, where we should be demanding of it some proof of its continued vigor. ANTHONY IV. TABELL DELAFIELD, HARVEY, TABELL INC. AWT rs Dow-Jones Industrials (12 00 p. m, ) S & P Composite (1200 p.m.) Cumulative Index (3/14/85 1261. 48 177.74 2353.46 No statement or expression of opInion or any other matter herein contained IS, or IS to be deemed to be directly or Ifldlrectly, an offer or the solicitation of an offer 10 buyor sell any securrty ret erred toor mentioned The maller IS presented merely tOf the convenience of the subSCriber White we believe the soufcesof our information to be rellabte we m no way represent or guarantee the accuracy thereof nor 01 the statements made herem Any action to be taken by the subscnber should be based on his own mvesttgallon and mformatlon Delafield, Harvey Tabell Inc, as a corporation and Its oltlcers or employees may now have or may later take, posilions or trades in respect to any seCUrities mentioned In thiS or any future ISSue, and such pOStlton may be d,ilerent from any VieWS now or heleafter expressed In thiS or any other Issue Delafield Harvey TaOOI1 Inc, which Is registered With the SEC as an Investment adVisor, maY.Qlvc advICe to Its Inveslment adVISOry and other customers mdependentlv 01 any statements made m thiS or in any other Issue Further information on any security menlloned herem is available on request