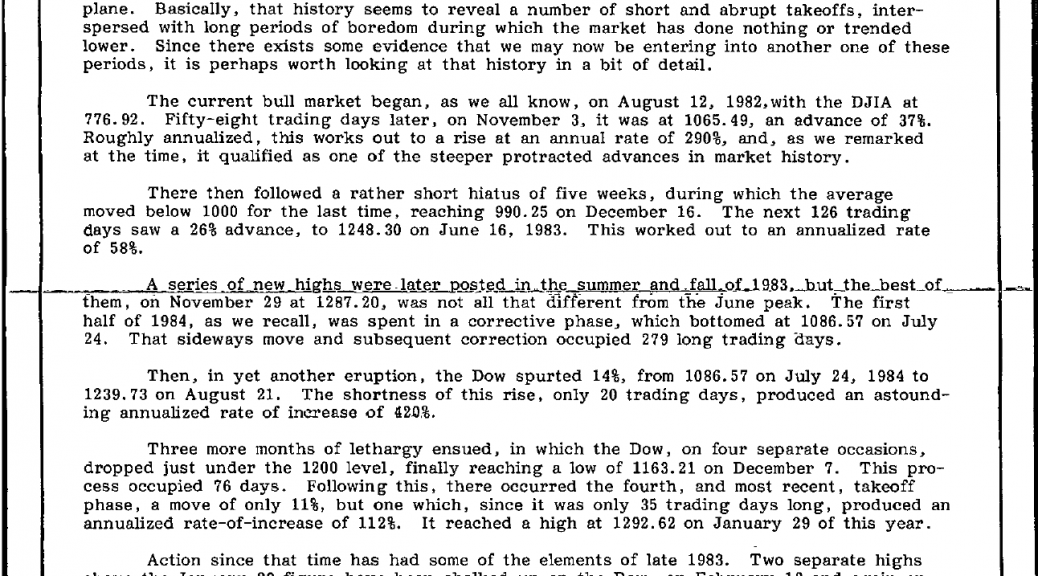 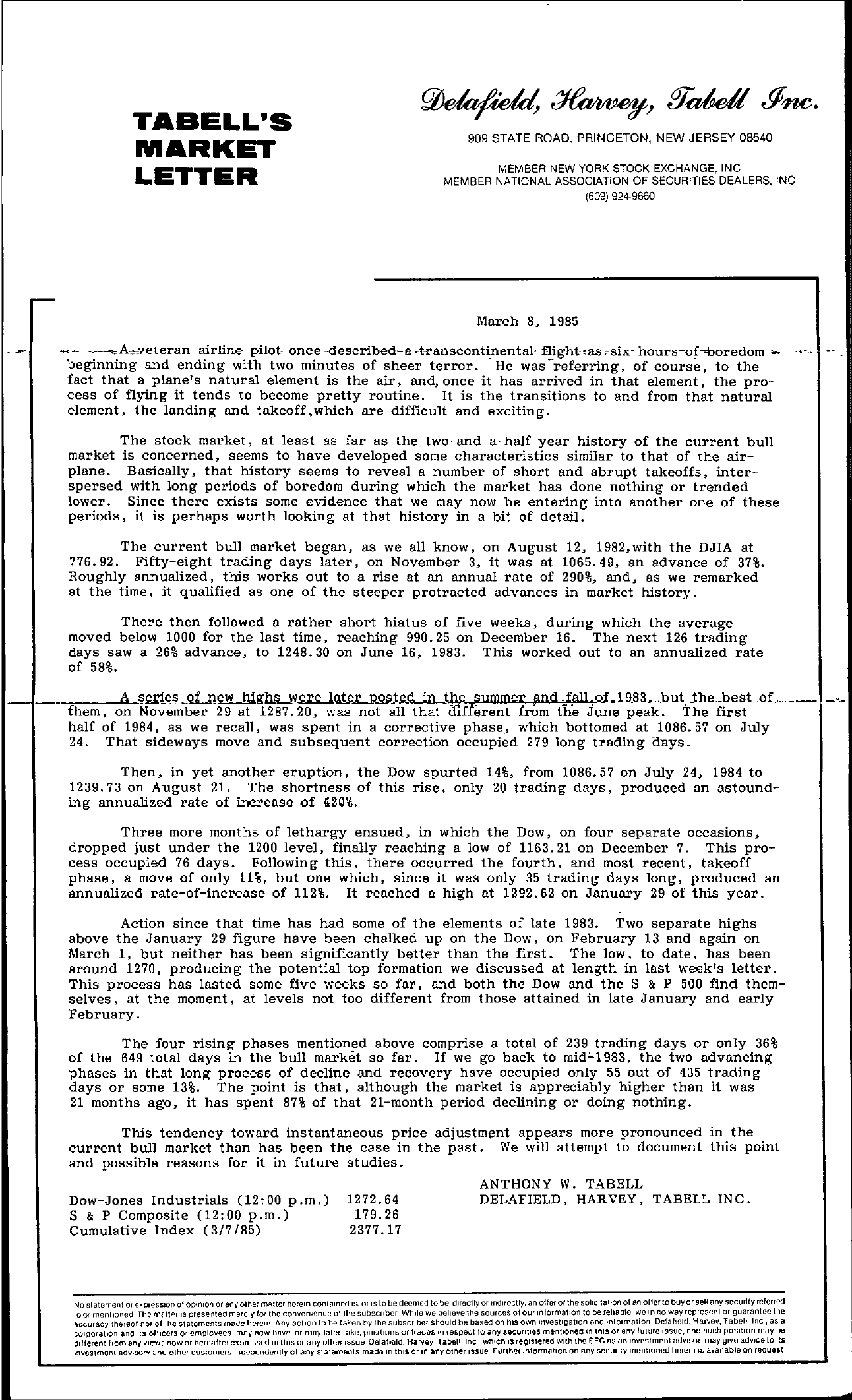 TABELL'S MARKET LETTER 909 STATE ROAD. PRINCETON, NEW JERSEY 08540 MEMBER NEW YORK STOCK EXCHANGE, INC MEMBER NATIONAL ASSOCIATION OF SECURITIES DEALERS, INC (609) 924-9660 – March 8, 1985 – – —Aveteran airline pilot once-described-artranscontinental' flight'assix- hours-ofboredom .-beginning and ending with two minutes of sheer terror He was -referring, of course, to the fact that a plane's natural element is the air, and, once it has arrived in that element, the process of flying it tends to become pretty routine, It is the transitions to and from that natural element, the landing and takeoff, which are difficult and exciting. The stock market, at least as far as the two-and-a-half year history of the current bull market is concerned, seems to have developed some characteristics similar to that of the airplane. Basically, that history seems to reveal a number of short and abrupt takeoffs, interspersed with long periods of boredom during which the market has done nothing or trended lower. Since there exists some evidence that we may now be entering into another one of these periods, it is perhaps worth looking at that history in a bit of detail. The current bull market began, as we all know, on August 12, 1982,with the DJIA at 776.92. Fifty-eight trading days later, on November 3, it was at 1065.49, an advance of 37. Roughly annualized, this works out to a rise at an annual rate of 290, and, as we remarked at the time, it qualified as one of the steeper protracted advances in market history. There then followed a rather short hiatus of five weeks, during which the average moved below 1000 for the last time, reaching 990.25 on December 16. The next 126 trading days saw a 26 advance, to 1248.30 on June 16, 1983. This worked out to an annualized rate of 58. A series of new highs were lateLllosJ.ed in…,Jhe summer and fall 0L19.83 ….butthe-hesLof. them, on November 29 at 1287.20, was not all that different from the june peak. The first half of 1984, as we recall, was spent in a corrective phase, which bottomed at 1086.57 on July 24. That sideways move and subsequent correction occupied 279 long trading lays. Then, in yet another eruption, the Dow spurted 14, from 1086.57 on July 24, 1984 to 1239.73 on August 21. The shortness of this rise, only 20 trading days, produced an astounding annualized rate of increase Qf 320.. Three more months of lethargy ensued, in which the Dow, on four separate occasions, dropped just under the 1200 level. finally reaching a low of 1163.21 on December 7. This process occupied 76 days. Followin g this, there occurred the fourth, and most recent, takeoff phase, a move of only 11, but one which, since it was only 35 trading days long, produced an annualized rate-of-increase of 112. It reached a high at 1292.62 on January 29 of this year. Action since that time has had some of the elements of late 1983. Two separate highs above the January 29 figure have been chalked up on the Dow, on February 13 and again on March I, but neither has been significantly better than the first. The low, to date, has been around 1270, producing the potential top formation we discussed at length in last week's letter. This process has lasted some five weeks so far, and both the Dow and the S & P 500 find themselves, at the moment, at levels not too different from those attained in late January and early February. The four rising phases mentioned above comprise a total of 239 trading days or only 36 of the 649 total days in the bull market so far. If we go back to mid1983, the two advancing phases in that long process of decline and recovery have occupied only 55 out of 435 trading days or some 13. The point is that, although the market is appreciably higher than it was 21 months ago, it has spent 87 of that 21-month period declining or doing nothing. This tendency toward instantaneous price adjustment appears more pronounced in the current bull market than has been the case in the past. We will attempt to document this point and possible reasons for it in future studies. Dow-Jones Industrials (1200 p.m.) 1272.64 S & P Composite (1200 p.m.) 179.26 Cumulative Index (3/7/85) 2377.17 ANTHONY W. TAB ELL DELAFIELD, HARVEY, TABELL INC. No slatllmenl or e/presslon of opinion or any other ml'lltcr herOin contained 15. or IS 10 be deemed to be dlrec1lyor mdmClly, an offer 01 the sohcllaUOfI 01 an oflcr to buy or sell any security referred loor mentioned The m(lltf'r rs presented merely 101 the con..enll'lfIce ollhe subscriber While we believe the seurces of our Information to be reliable we rn no way represent or guarantee the accuracy thereof nor 01 Ihe statemC!nlS made herem Any acllon 10 be taen by the subscriber should be based on hiS own Investigation and Informallon Delafield, Harvev, Tabell Inc, as a corporation and Its ol1lcers or emplovees may new M.ve or may tater take, positions or trades In respect 10 any securrlles mentioned m Ihls or any future Issue, and such position may be dlHerent Irom any views now or herea1ter expressed In thiS or any other Issue Delaheld, Harvey labell Inc which Isreglslered With Ihe SECas an Investment adVisor, may give advice to Its Ifwestment adVISOry and othe' customers mdependently of any statements made m thiS Of In any other Issue Further mlormallon on any secuflty mentioned herem IS available on request