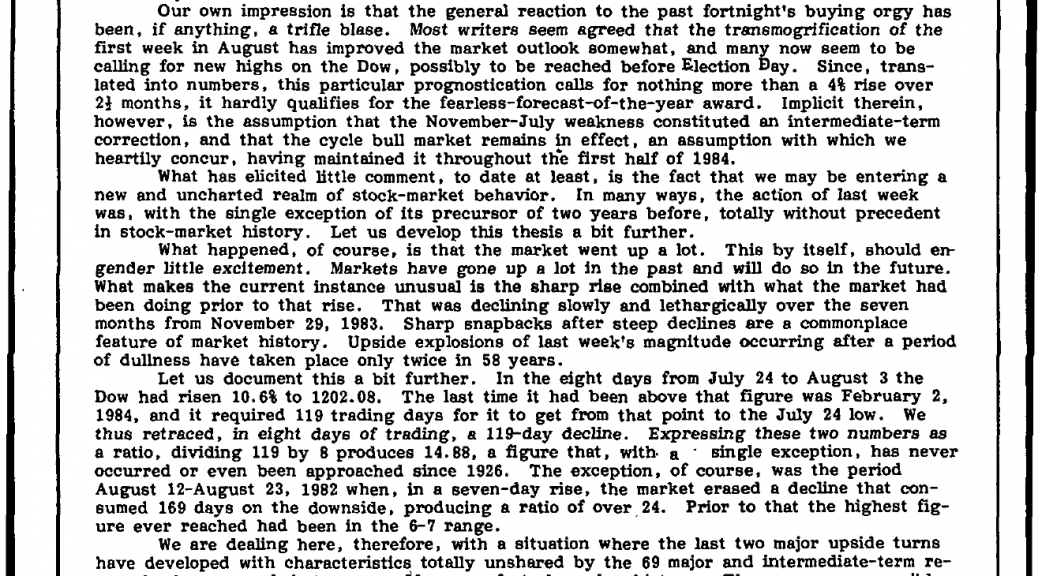 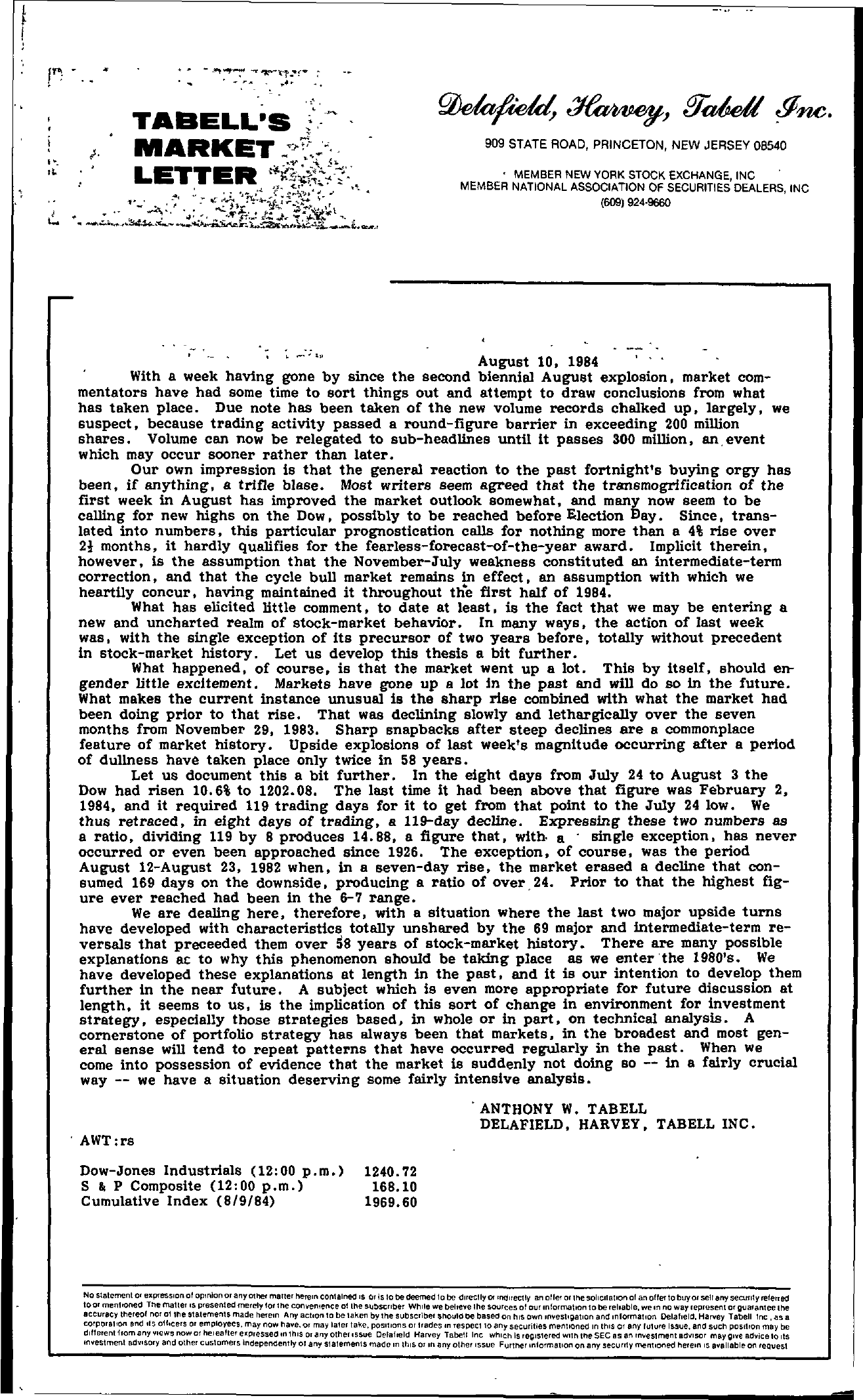 1 f l ., …, -r '11'-'t1''. – ,' ..41 909 STATE ROAD, PRINCETON, NEW JERSEY 08540 MEMBER NEW YORK STOCK EXCHANGE, INC ' MEMBER NATIONAL ASSOCIATION OF SECURITIES DEALERS, INC (609) 924,9660 – , , -' — . August 10, 1984 ' . , With a week having gone by since the second biennial August explosion, market com- mentators have had some time to sort things out and attempt to draw conclusions from what has taken place. Due note has been taken of the new volume records chalked up, largely, we suspect, because trading activity passed a round-figure barrier in exceeding 200 million shares. Volume can now be relegated to sub-headlines until it passes 300 million, an, event which may occur sooner rather than later. Our own impression is that the general reaction to the past fortnight's buying orgy has been, if anything, a trifle blase. Most writers seem agreed that the trsnsmogrification of the first week in August has improved the market outlook somewhat, and many now seem to be calling for new highs on the Dow, possibly to be reached before E;lection Day. Since, trans- lated into numbers, this particular prognostication calls for nothing more than a 4 rise over 21 months, it hardly qualifies for the fearless-forecast-of-the-year award. Implicit therein, however, is the assumption that the November-July weakness constituted an intermediate-term correction, and that the cycle bull market remains in effect, an assumption with which we heartily concur, having maintained it throughout the first half of 1984. What has elicited little comment, to date at least, is the fact that we may be entering a new and uncharted realm of stock-market behavior. In many ways, the action of last week was, with the single exception of its precursor of two years before, totally without precedent in stock-market history. Let us develop this thesis a bit further. What happened, of course, is that the market went up a lot. This by itself, should en- gender little excitement. Markets have gone up a lot in the past and will do so in the future. What makes the current instance unusual is the sharp rise combined with what the market had been doing prior to that rise. Thst was declining slowly and lethargically over the seven months from November 29, 1983. Sharp snapbscks after steep declines are s commonplace feature of market history. Upside explosions of last week's magnitude occurring after a period of dullness havs taken place only twice in 58 years. Let us document this a bit further. In the eight days from July 24 to August 3 the Dow hsd risen 10.6 to 1202.08. The last time it had been above that figure was February 2, 1984, and it required 119 trading days for it to get from that point to the July 24 low. We thus retraced, in eight days of trading, a 119-day decline. Expressing these two numbers as a ratio, dividing 119 by 8 produces 14.88, a figure that, with. a . single exception, has never occurred or even been approached since 1926. The exception, of course, was the period August 12-August 23, 1982 when, in a seven-day rise, the market erased a decline that con- sumed 169 days on the downside, producing a ratio of over. 24. Prior to that the highest fig- ure ever reached had been in the 6-7 range. We are dealing here, therefore, with a situation where the last two major upside turns have developed with Characteristics totally unshared by the 69 major and intermediate-term re- versals that preceeded them over 58 years of stock-market history. There are many possible explanations ae to why this phenomenon should be taking place as we enter'the 1980's. We have developed these explanations at length in the past, and it is our intention to develop them further in the near future. A subject which is even more appropriate for future discussion at length, it seems to us, is the implication of this sort of change in environment for investment strategy, especially those strategies bssed, in whole or in part, on technical analysis. A cornerstone of portfOlio strategy has always been that markets, in the broadest and most gen- eral sense will tend to repeat patterns that have occurred regularly in the past. When we come into possession of evidence that the market is suddenly not doing so — in s fairly crucial way — we hsve a situation deserving some fairly intensive analysis . AWTrs . ANTHONY W. TABELL DELAFIELD, HARVEY, TABELL INC. Dow-Jones Industrials (12 00 p. m.) 1240.72 S P Composite (1200 p.m.) 168.10 Cumulative Index (8/9/84) 1969.60 NO statement 01' expresSion 01 opmion or flnyOther mailer herein contained IS or Is 10 be deemed 10 be directly or Indlrectty an oller or the soliCitation of an offer 10 buy or sell any security referred toor mentIOned The matter IS presented merely lor the convemence ollhe subscriber While we believe the sources of our mformatlOn to be relIable, we In no way represent or guarantee the aCCurac)' thereof nor olttle statements made herein Any achon to be taken by the subscriber Should be based on hiS own investigation and mformatlon Delafield, Harvey Tabell Inc, as a corporal Ion and liS oHIcers or employees, ma)' now have, Of may later lake, poSitions or trades 10 respect 10 any securities mentioned In thiS 01 any future Issue, and SUCh poslllon may be dillereni flomany views now 01 heleafler eKpressed mthlS or any other Issue Delaheld Harvey laooll Inc whiCh Is registered With the SEC as 81'\ Inlles1mentadvlsor may give advice 10 Its Investment adVISOry and other customers Independenlly 01 an)' statements made In this 01 In lIny other Issue Further Information on any secuflly mentioned herem IS available on request