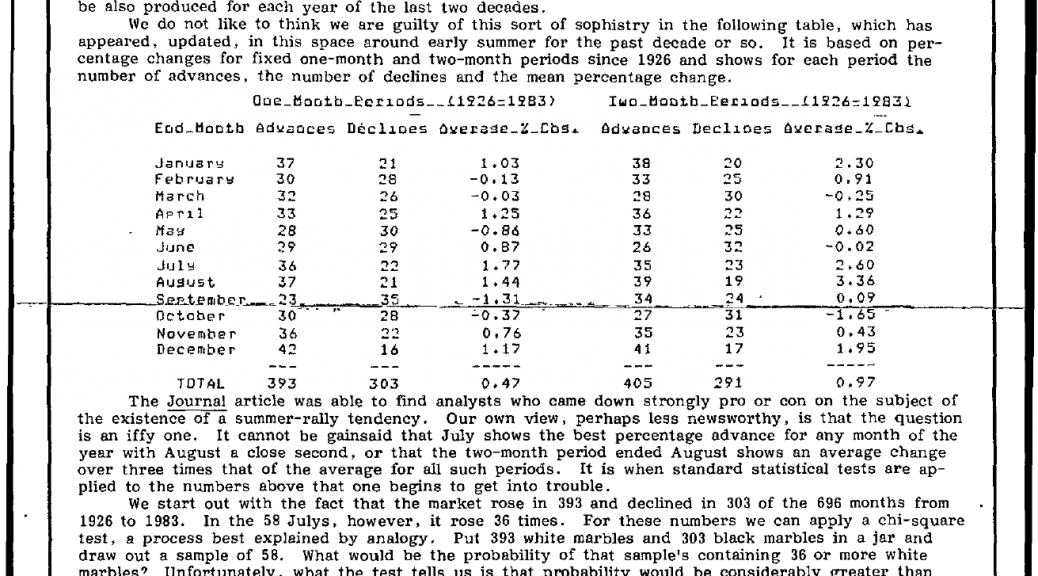 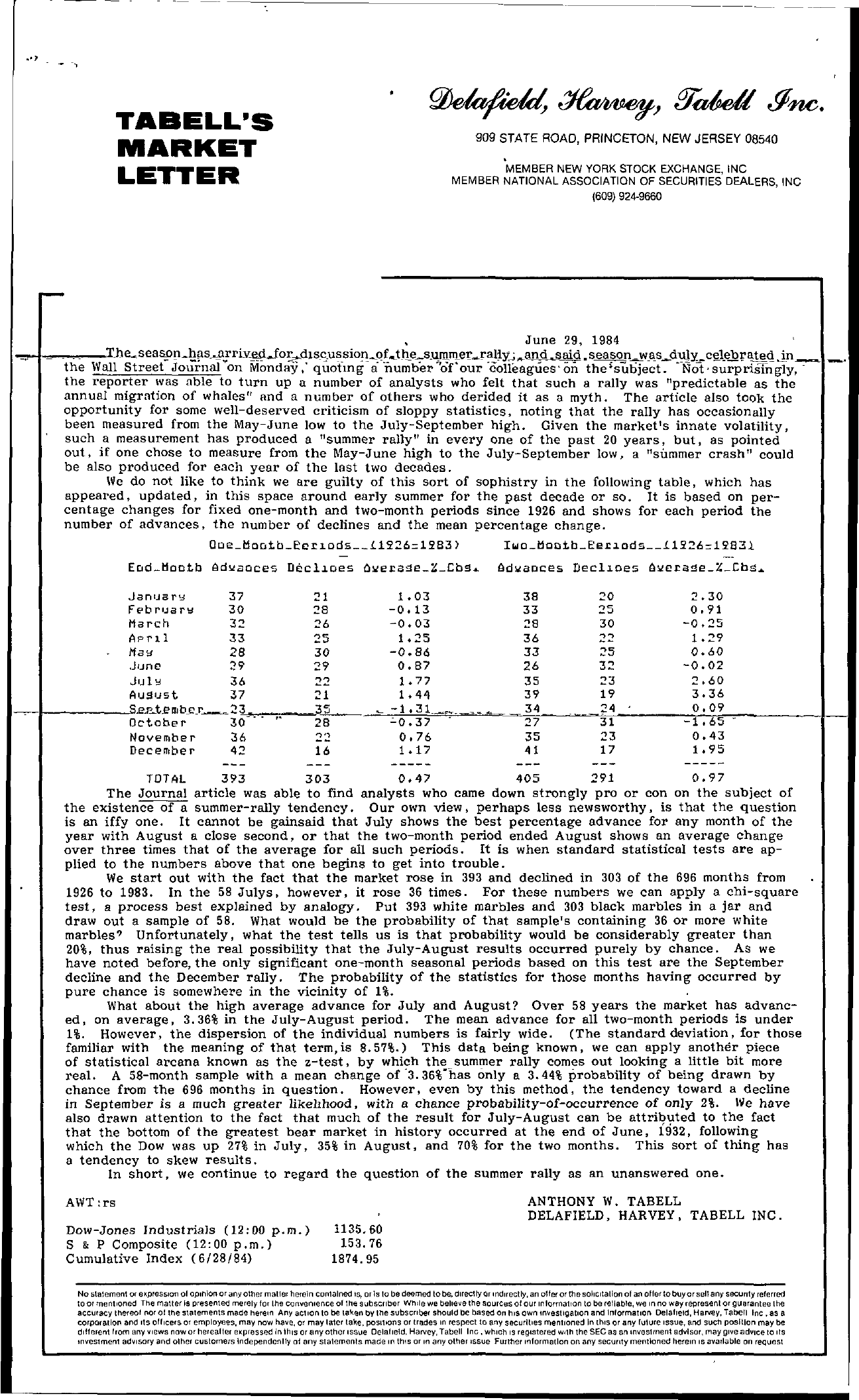 .., TABELL'S MARKET LETTER 909 STATE ROAD, PRINCETON, NEW JERSEY 08540 , MEMBER NEW YORK STOCK EXCHANGE, INC MEMBER NATIONAL ASSOCIATION OF SECURITIES DEALERS, INC 1609) 9249660 June 29, 1984 'I TheseaSfnl.!i's.,nyriYe,dfo!lS;Ussiol1()tbe-o-sJ!l!erra!ly and s. seasonasd.uJY c!llebrate!.in . the Wall Street Journal on Monday, quotmg a number of our colleagues' on the'subject. Not surprisingly, . the reporter was able to turn up a number of analysts who felt that such a rally was predictable as the annual migration of whales and a number of others who derided it as a myth. The article also tOOk the opportunity for some well-deserved criticism of sloppy statistics, noting that the rally has occasionally been measured from the May-June low to the July-September high. Given the market's innate volatility, such a measurement has produced a summer rally in everyone of the past 20 years, but, as pointed Qut, if one chose to measure from the May-June high to the July-September low, a summer crash II could be also produced for each year of the last two decades. We do not like to think we are guilty of this sort of sophistry in the following table, which has appeared, updated, in this space around early summer for the past decade or so. It is based on percentage changes for fixed one-month and two-month periods since 1926 and shows for each period the number of advances, the number of declines and the mean percentage change. January FE'b rlJ.3 ry 37 30 21 1.03 28 -0.13 38 20 33 25 2.30 0,91 March 32 26 -0.03 28 30 -0.25 AprIl 33 25 1.5 36 22 1.29 H 28 30 -0.86 .June 29 29 0.87 33 25 26 32 0.60 -0.02 JIJ l!l 36 AIJ;tI.lst 37 SO.ec.et.ot.be IeJJrbJ'r……3!03… .. 22 21 35 28 1.77 1.44 -1.3L '0.37 – 35 39 34 27 23 19 4 31 2.60 3.36 0.09 -1.65 . November 36 2 0.76 December 42 16 1.17 — — —– 35 23 41 17 — — 0.43 1.95 —– TOTAL 393 303 0.47 405 291 0.97 The Journal article was able to rmd analysts who came down strongly pro or con on the subject of the existence of a summer-rally tendency. Our own view. perhaps less newsworthy, is that the question is an iffy one. It cannot be gainsaid that July shows the best percentage advance for any month of the year with August a close second, or that the two-month period ended August shows an average change over three times that of the average for all such periods. It is when standard statistical tests are ap- plied to the numbers above that one begins to get into trouble. We start out with the fact that the market rose in 393 and declined in 303 of the 696 months from 1926 to 1983. In the 58 Julys. however, it rose 36 times. For these numbers we can apply a chi-square test, a process best explained by analogy. Put 393 white marbles and 303 black marbles in a jar and draw out a sample of 58. What would be the probability of that sample's containing 36 or more white marbles Unfortunately, what the test tells us is that probability would be considerably greater than 20, thus raising the real possibility that the July-August results occurred purely by chance. As we have noted before, the only significant one-month seasonal periods based on this test are the September decline and the December rally. The probability of the statistics for those months having occurred by pure chance is somewhere in the vicinity of 1. What about the high average advance for July and August Over 58 years the market has advanc- ed, on average. 3.36 in the July-August period. The mean advance for all two-month periods is under 1. However, the dispersion of the individual numbers is fairly wide. (The standard deviation, for those familiar with the meaning of that term, is 8.57.) This data being known, we can apply another piece of statistical arcana known as the z-test, by which the summer rally comes out looking a little bit more real. A 58-month sample with a mean change oC3.36has only a 3.44 probability of being drawn by chance from the 696 months in question. However. even by this method, the tendency toward a decline in September is a much greater likelIhood, with a chance probability-of-occurrence of only 2. lYe have also drawn attention to the fact that much of the result for July-August can be attrilvted to the fact that the bottom of the greatest bear market in history occurred at the end of June, 1932. following which the Dow was up 27 in July, 35 in August, and 70 for the two months. This sort of thing has a tendency to skew results. In short. we continue to regard the question of the summer rally as an unanswered one. AWT rs Dow-Jones Industrials (1200 p.m.) S & P Composite (1200 p.m.) Cumulative Index (6/28/84) 1135.60 153.76 1874.95 ANTHONY W. TABELL DELAFIELD, HARVEY. TABELL INC. No statement Of epresslon of oplt110n or any other mailer hereIn contained IS, or Is to be deemed to be, directly Or Indirectly. an oUer or the soliCitation of an oller to buyer sell any security referred toOl mentioned The matter Is presented merely/or Ihe convenience of the subSCriber While we believe the sources of our information to be reliable, we In no way represent or guarantee the accuracy lhereof oor of the statements made herein Any action to be laken by the subsCriber Should be based On hiS own investigation and InformatiOn Delafield, Harvey, Taooll Inc, as a corporation and ItS officers 01 employees, may now have, Of may later take, posItions or trades In respect to any securities mentioned In thiS or any fulure ISSUe, and such pOSition maybe dlHerent from any views nowor heleafter ellpressed Inthls or any other Issue Delafield, Harvey, labell Inc, which IS registered With the SEC as an Investment advisor, mayglveadYlce to 115 Inyestment adVISOry and other customers Independently of any statements made m thiS or In any other Issue Further m/ormatlon on any secunty mentioned herem IS avaIlable on reQuest