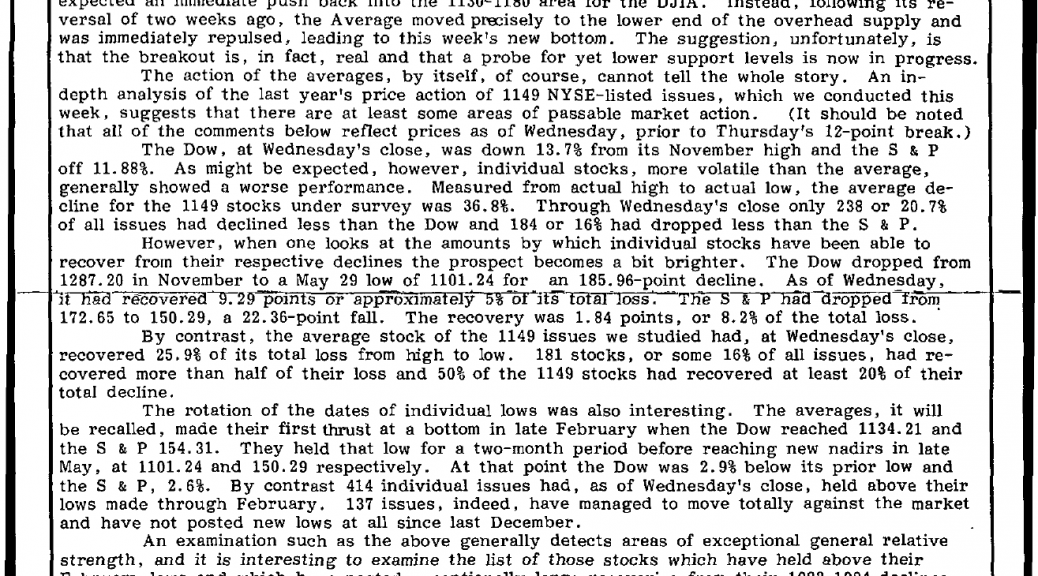 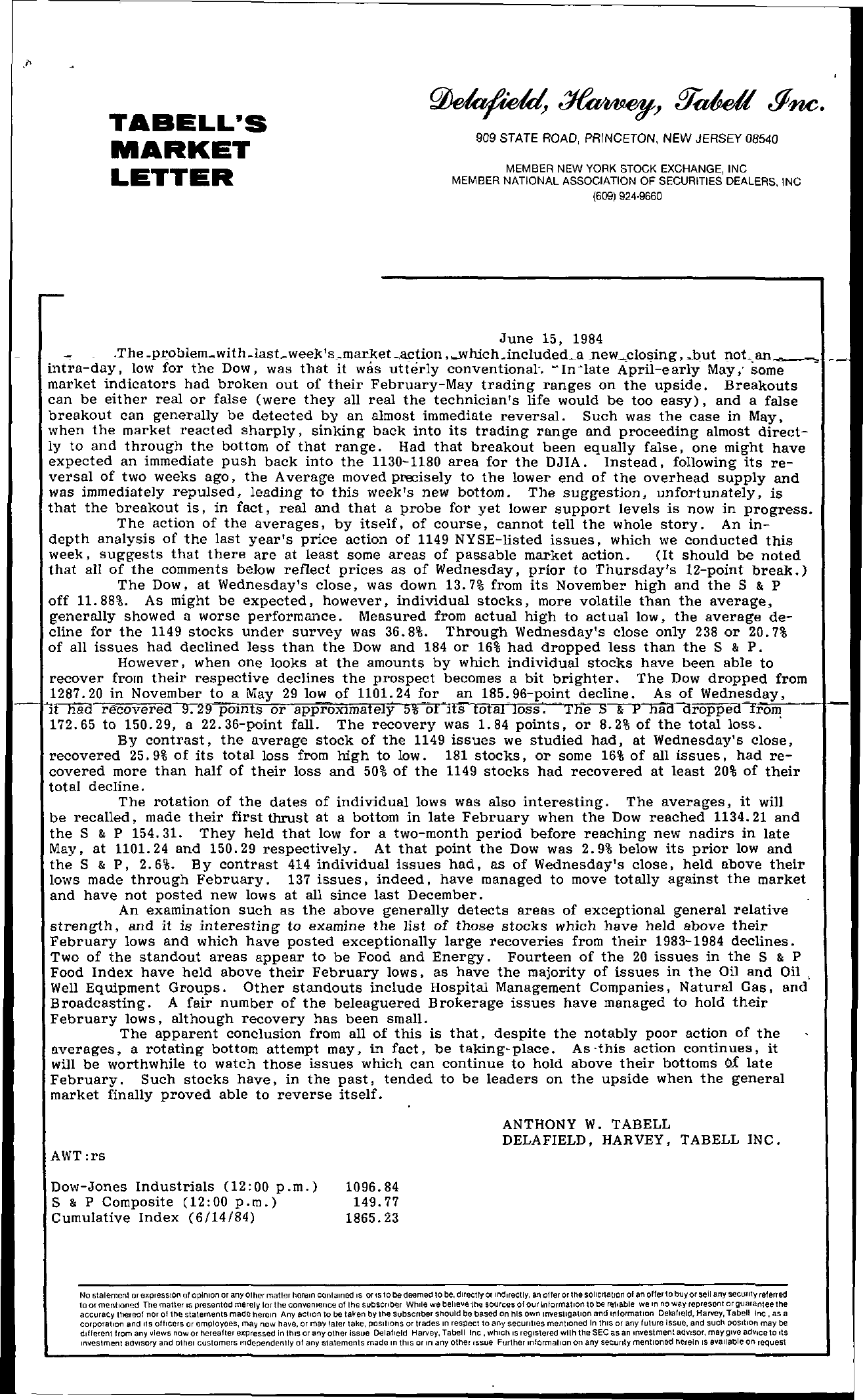 ,I TABELL9 S MARKET LETTER 909 STATE ROAD, PRINCETON, NEW JERSEY 08540 MEMBER NEW YORK STOCK EXCHANGE, INC MEMBER NATIONAL ASSOCIATION OF SECURITIES DEALERS, INC (609) 924,9660 – June 15, 1984 – ,The problemwithlast.week's,.market.action .whichincludeda newclosing, but not. an -,I intra-day, low for the Dow, was that it was utterly conventional'. -In'late Aprii-early May; some market indicators had broken out of their February-May trading ranges on the upside. Breakouts can be either real or false (were they all real the technician's life would be too easy), and a false breakout can generally be detected by an almost immediate reversal. Such was the case in May, when the market reacted sharply. sinking back into its trading range and proceeding almost direct- ly to and through the bottom of that range. Had that breakout been equally false, one might have expected an immediate push back into the 1130-1180 area for the DJIA. Instead, following its re- versal of two weeks ago, the Average moved pI'a!isely to the lower end of the overhead supply and was immediately repulsed, leading to this week's new bottom. The suggestion, unfortunately, is that the breakout is, in fact, real and that a probe for yet lower support levels is now in progress. The action of the averages, by itself, of course, cannot tell the whole story. An in- depth analysis of the last year's price action of 1149 NYSE-listed issues, which we conducted this week. suggests that there are at least some areas of passable market action. (It should be noted that all of the comments below reflect prices as of Wednesday, prior to Thursday's 12-point break.) The Dow, at Wednesday's close, was down 13.7 from its November high and the S & P off 11. 88. As might be expected, however, individual stocks, more volatile than the average, generally showed a worse performance. Measured from actual high to actual low, the average de- cline for the 1149 stocks under survey was 36.8. Through Wednesday's close only 238 or 20.7 of all issues had declined less than the Dow and 184 or 16 had dropped less than the S & P. However, when one looks at the amounts by which individual stocks have been able to recover from their respective declines the prospect becomes a bit brighter. The Dow dropped from 1287.20 in November to a May 29 low of 1101. 24 for an 185. , ,decline. As of Wenprln, H naa ,,,,,uv,,,,,u . 2. p,!nrs or ;';,' 'Ii 01 lIS wral lOSS. Tne,. t' naa irO 172.65 to 150.29, a 22.36-point !all. The recovery was 1.84 points, or 8.2 of the tot-a1 loss. By contrast, the average stock of the 1149 issues we studied had, at Wednesday's close, recovered 25. 9 of its total loss from high to low. 181 stocks, or some 16 of all issues, had re- covered more than half of their loss and 50 of the 1149 stocks had recovered at least 20 of their total decline. The rotation of the dates of individual lows was also interesting. The averages, it will be recalled, made their first thrust at a bottom in late February when the Dow reached 1134.21 and the S & P 154.31. They held that low for a two-month period before reaching new nadirs in late May, at 1101. 24 and 150.29 respectively. At that point the Dow was 2.9 below its prior low and the S & P, 2.6. By contrast 414 individual issues had, as of Wednesday's close, held above their lows made through February. 137 issues, indeed. have managed to move totally against the market and have not posted new lows at all since last December. An examination such as the above generally detects areas of exceptional general relative strength, and it is interesting to examine the list of those stocks which have held above their February lows and which have posted exceptionally large recoveries from their 1983-1984 declines. Two of the standout areas appear to be Food and Energy. Fourteen of the 20 issues in the S & P Food Index have held above their February lows, as have the majority of issues in the Oil and Oil , Well Equipment Groups. Other standouts include Hospital Management Companies, Natural Gas, and Broadcasting. A fair number of the beleaguered Brokerage issues have managed to hold their February lows, although recovery has been small. The apparent conclusion from all of this is that, despite the notably poor action of the averages, a rotating bottom attempt may, in fact, be taking-place. As,this action continues, it will be worthwhile to watch those issues which can continue to hold above their bottoms Of late February. Such stocks have. in the past, tended to be leaders on the upside when the general market finally proved able to reverse itself. AWT rs ANTHONY W. TABELL DELAFIELD, HARVEY, TABELL INC. Dow-Jones Industrials (12 00 p.m.) S & P Composite (1200 p.m.) Cumulative Index (6/14/84) 1096.84 149.77 1865.23 No statement or expression of opinion or any other matter hmeln Contained IS or IS to be deemed 10 be, directly or indirectly, an oller or the solict1atton of an offer to buyar sell any security referred to or mentioned The mailer IS presented merely lor the convenience of the subscnber While we believe the sources 01 our Information to be reliable we In no way represent or guarantee the accuracy thereof nor 01 the statements made herem Any action to be taen by the subSCriber should be based on his own Invesllgatlon and Information Delafield. Harvey, Taben Inc, as a corporation and lIs officers or employees, may now have, or may laler take, POSitions or trades In resPect to any securities mentioned In thiS or any future Issue, and such position may be olfferenllrom any views nOWOI hereafter eXPlessed In thiS or any other Issue Delafield Harvey.labell Inc. which IS registered with the SEC as an investment adVisor. may give aovlce to Its Investment advISOry and other customers IndependenUy 01 any statements made In thiS or In any other ISSue Further InfOrmal Ion on any security mentioned herein IS ayallable on request