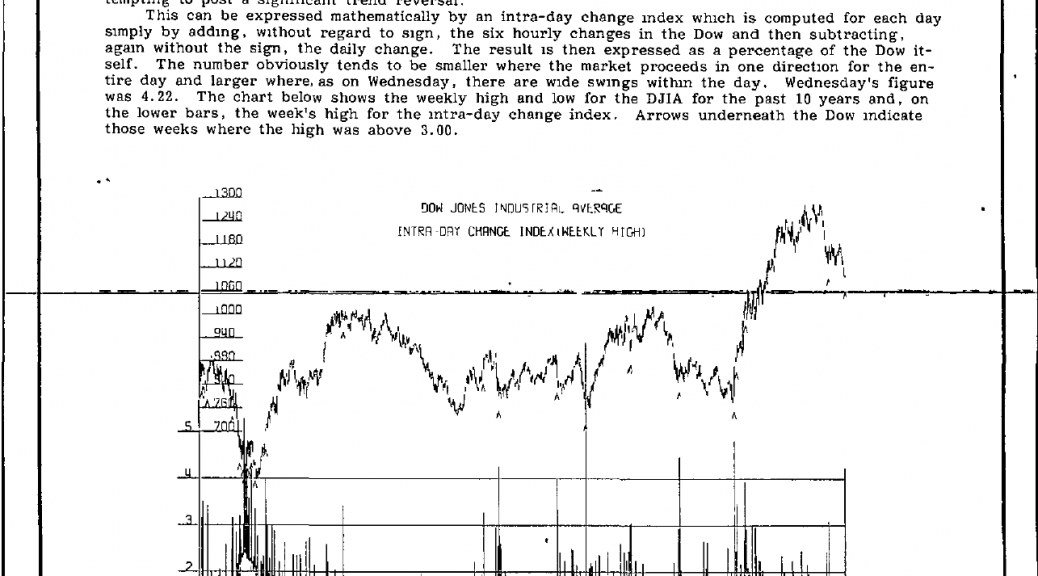 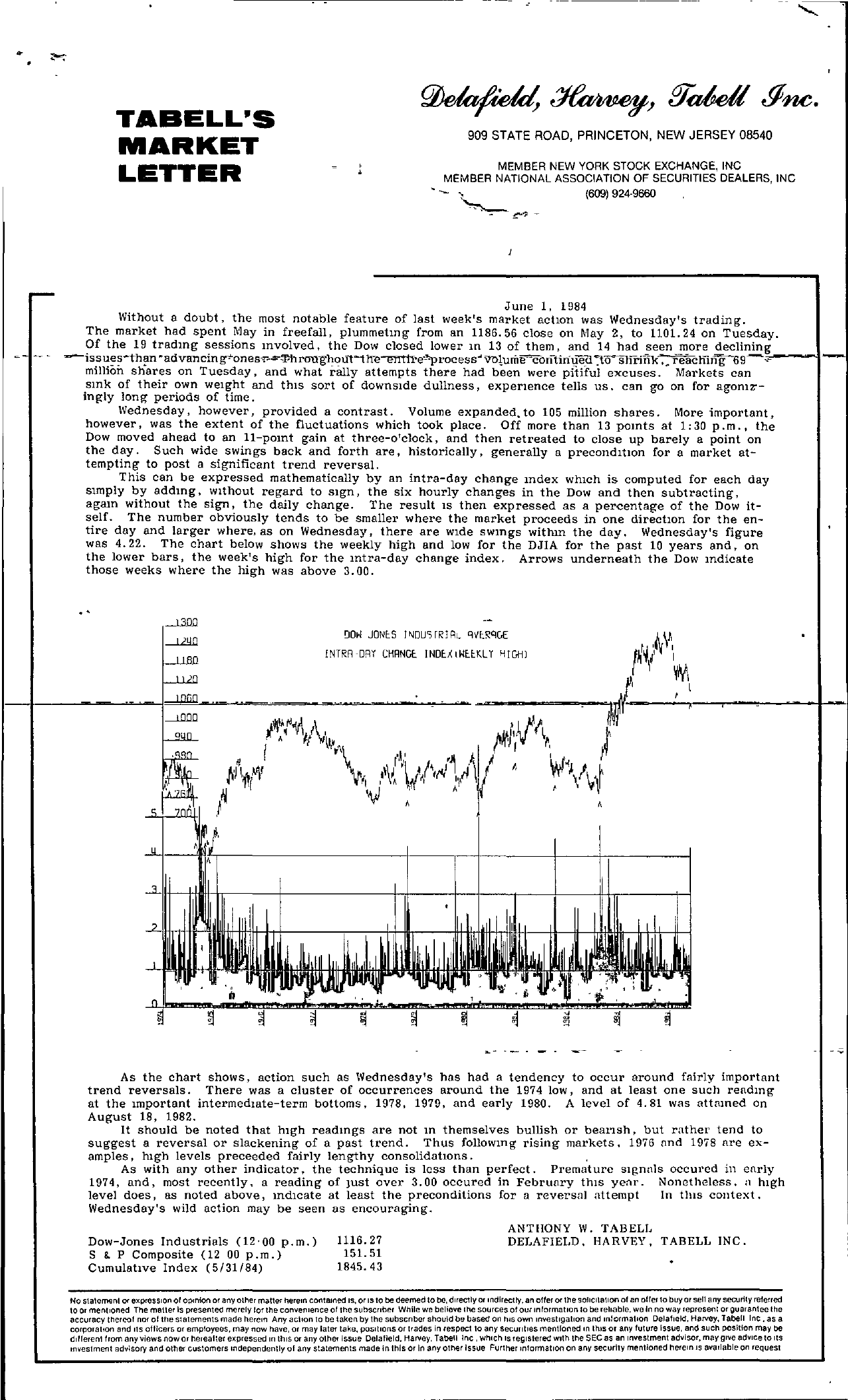 TABELL'S MARKET LETTER 909 STATE ROAD, PRINCETON, NEW JERSEY 08540 MEMBER NEW YORK STOCK EXCHANGE, INC MEMBER NATIONAL ASSOCIATION OF SECURITIES DEALERS, INC , – – (609) 924-9660 June I, 1984 Without a doubt, the most notable feature of last week's market actIOn was Wednesday's trading. The market had spent l\'lay in freefall. plummetmg from an 1186.56 close on May 2, to 1101. 24 on Tuesday. Of the 19 tradmg sessions Involved. the Dow closed lower In 13 of them. and 1;;4hadse(enmore'i1!lt 1 rally—–iss ues–than advancin gonesvrmTghout….ttre-enttIe-process' VO!uriH.'!–contiIfuoo '' million shares on Tuesday. and what attempts there had been were pitiful excuses. Markets can smk of their own weIght and thIS sort of downsIde dullness, experIence tells us. can go on for agonIzoingly long periods of time. Wednesday, however, provided a contrast. Volume expanded. to 105 million shares. More important, however, was the extent of the fluctuations which took place. Off more than 13 pomts at 130 p.m . the Dow moved ahead to an ll-pomt gain at three-o'clock. and then retreated to close up barely a point on the day. Such wide swings back and forth are. historically. generally a precondItIOn for a market at- tempting to post a significant trend reversal. This can be expressed mathematically by an intra-day change mdex WhICh is computed for each day sImply by addmg. wIthout regard to sIgn, the six hourly changes in the Dow and then subtracting, agrun without the sign, the daily change. The result IS then expressed as a percentage of the Dow it- self. The number obviously tends to be smaller where the market proceeds in one direchon for the en- tire day and larger where, as on Wednesday, there are wIde swmgs withm the day. Wednesday's figure was 4.22. The chart below shows the weekly high and low for the DJIA for the past 10 years and. on the lower bars, the week's high for the mtra-day change index. Arrows underneath the Dow mdicate those weeks where the high was above 3.00 . .. O JONeS louorRIAc qVeqGE INTRA-DRY CHANGE INOeAIWeeKLY HIGH) , I I 'W, I As the chart shows, action such as Wednesday's has had a tendency to occur around fairly important trend reversals. There was a cluster of occurrences around the 1974 low, and at least one such readmg at the Important intermedIate-term bottoms. 1978, 1979, and early 1980. A level of 4.81 was attmned on August 18, 1982. It should be noted that hIgh readmgs are not 10 themselves bullish or bearIsh. but rather tend to suggest a reversal or slackening of a past trend. Thus followmg rising markets. 1976 nnd 1978 nre ex- amples. hIgh levels preceeded fairly lengthy consolidatIons. , As with any other indicator. the technique is less than perfect. Premature sIgnals occured in early 1974, and, most recently. a reading of Just over 3.00 occured in February thIS year. Nonetheless. n hIgh level does, as noted above, mdicate at least the preconditions for a reversal attempt In thIS context. Wednesday's wild action may be seen as encouraging. Dow-Jones Industrials (12' 00 p. m.) S & P Composite (12 00 pm) Cumulative Index (5/31184) 1116.27 151.51 1845.43 ANTHONY IV. TAB ELL DELAFIELD. HARVEY, TABELL INC. No statement or expressIon or opmion or any other matter herem contained IS, or IS to be deemed to be, directly or mdirectly, an offer or the soliCitation of an offer to buy or sell any security referred to or mentIoned The mailer is presented merely lor the convemence 01 the subscrIber While we bellee the sources of our Inrormatlon 10 be reltable, we In no way represent or guarantee the accuracy thereof nOf olthe statements made herem Any acllon to be taken by the subscnber should be based on hiS own Inestlgatlon and information Delafield, Harvey, Tabell Inc, as a corporalton and ItS ofllcers or employees, may now hae, or may later take, posItIons or trades In respect to any secufll1es mentioned In thiS or any future issue, and such posltlon may be dilierent from any Iews now or hereafter expressed In thiS or any other Issue Delafield, Harvey, Tabell Inc, which IS registered With the SEC as an Investment advisor, may give adVICe to Its Investment adviSOry and other customers mdependenlly of any statements made In this Or In any other Issue Further information on any security mentioned herein IS available on request