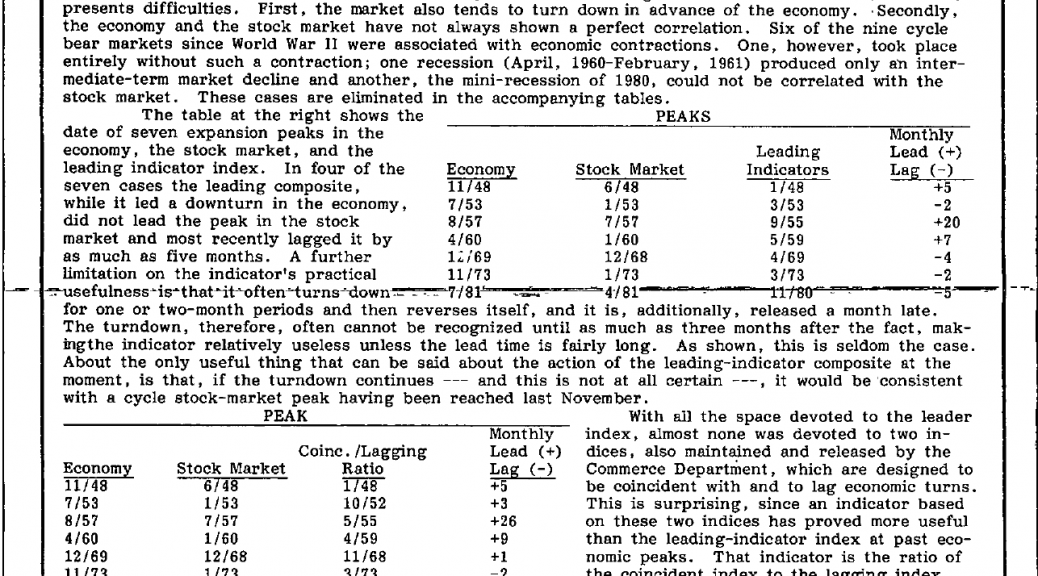 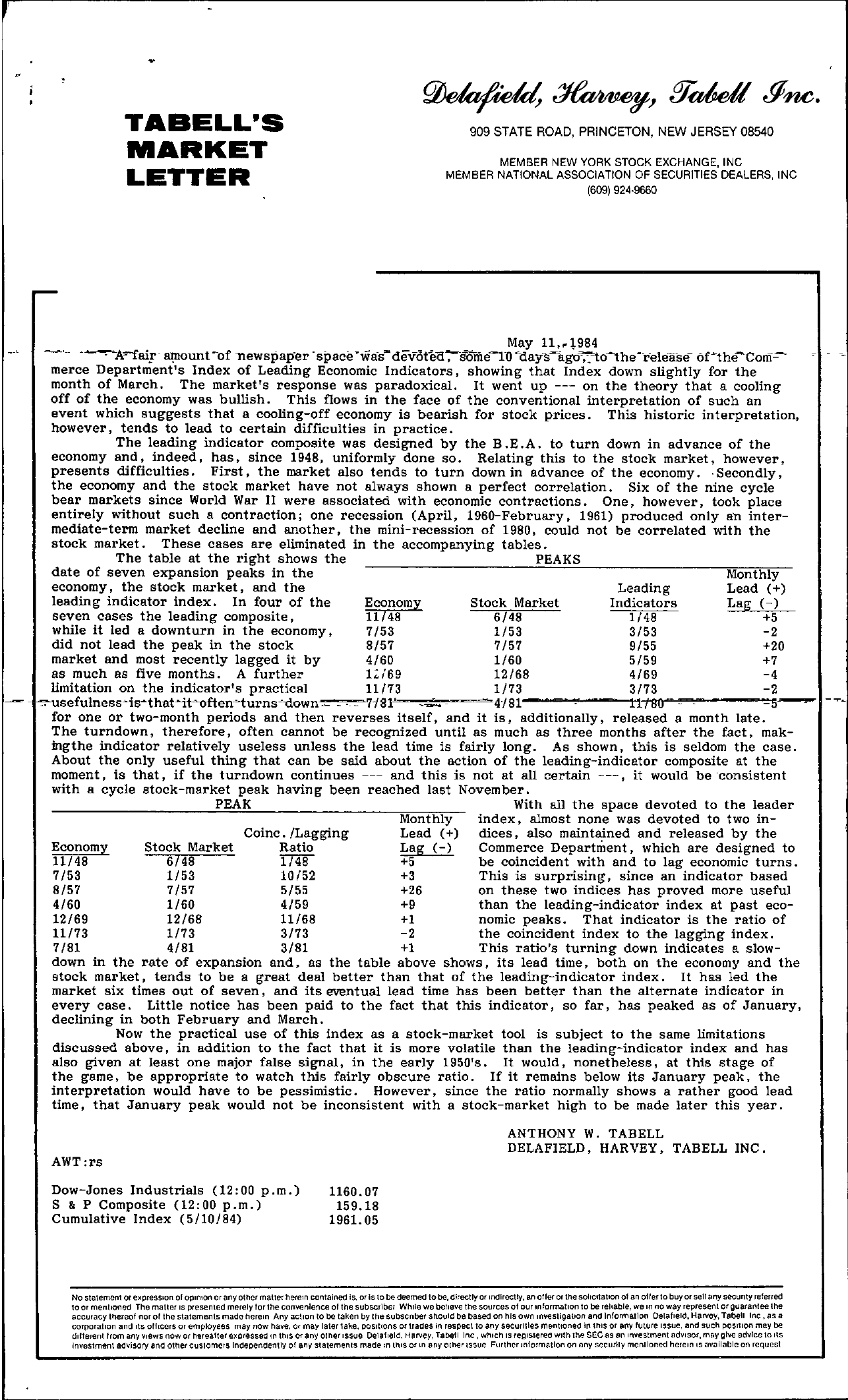 I' TABELL'S MARKET LETTER 909 STATE ROAD, PRINCETON, NEW JERSEY 08540 MEMBER NEW YORK STOCK EXCHANGE, INC MEMBER NATIONAL ASSOCIATION OF SECURITIES DEALERS, INC (609) 9249660 May 11,.984 Aair !Dount of newspaper 'space 'was-devote(i';-sorfierO '1iayS,,-go;'tolhe-'release- Ofthe-Com merce Department's Index of Leading Economic Indicators, showing that Index down slightly for the month of March. The market's response was paradoxical. It went up — on the theory that a cooling off of the economy was bullish. This flows in the face of the conventional interpretation of such an event which suggests that a cooling-off economy is bearish for stock prices. This historic interpretation, however, tends to lead to certain difficulties in practice. The leading indicator composite was designed by the B.E.A. to turn down in advance of the economy and, indeed, has, since 1948, uniformly done so. Relating this to the stock market, however, presents difficulties. First, the market also tends to turn down in advance of the economy. .Secondly, the economy and the stock market have not always shown a perfect correlation. Six of the nine cycle bear markets since World War II were associated with economic contractions. One, however, took place entirely without such a contraction; one recession (April, 1960-February, 1961) produced only ah inter- mediate-term market decline and another, the mini-recession of 1980, could not be correlated with the stock market. These cases are eliminated in the accompanying tables. The table at the right shows the PEAKS date of seven expansion peaks in the Monthly economy, the stock market, and the Leading Lead () leading indicator index. In four of the Economy Stock Market Indicators Lag (-) seven cases the leading composite, 11/48 6/48 1/48 5 while it led a downturn in the economy, 7/53 1/53 3/53 -2 did not lead the peak in the stock 8/57 7/57 9/55 20 market and most recently lagged it by 4/60 1/60 5/59 7 as much as five months. A further 12169 12/68 4/69 -4 limitation on the indicator's practical 11/73 1/73 3/73 -2 – – usefulnessisthat'it-'-often-'-turns'down.- -' 7/81 -4'/81 tl-!I'8110''''''—-5- for one or two-month periods and then reverses itself, and it is, additionally, released a month late. The turndown, therefore, often cannot be recognized until as much as three months after the fact, mak- ingthe indicator relatively useless unless the lead time is fairly long. As shown, this is seldom the case. About the only useful thing that can be said about the action of the leading-indicator composite at the moment, is that, if the turndown continues — and this is not at all certain —, it would be 'consistent with a cycle stock-market peak having been reached last November. PEAK With all the space devoted to the leader Monthly index, almost none was devoted to two in- Coinc. /Lagging Lead () dices, also maintained and released by the Economy Stock Market Ratio Lag (-) Commerce Department, which are designed to 11/48 6/48 1/48 5 be coincident with and to lag economic turns. 7/53 1/53 10/52 3 This is surprising, since an indicator based 8/57 7/57 5/55 26 on these two indices has proved more useful 4/60 1/60 4/59 9 than the leading-indicator index at past eco- 12/69 12/68 11/68 1 nomic peaks. That indicator is the ratio of 11/73 1/73 3/73 -2 the coincident index to the lagging index. 7/81 4/81 3/81 l This ratio's turning down indicates a slow- down in the rate of expansion and, as the table above shows, its lead time, both on the economy and the stock market, tends to be a great deal better than that of the leading-indicator index. It has led the market six times out of seven, and its eventual lead time has been better than the alternate indicator in every case. Little notice has been paid to the fact that this indicator, so far, has peaked as of January, declining in both February and March. Now the practical use of this index as a stock-market tool is subject to the same limitations discussed above, in addition to the fact that it is more volatile than the leading-indicator index and has also given at least one major false signal, in the early 1950's. It would, nonetheless, at this stage of the game, be appropriate to watch this fairly obscure ratio. If it remains below its January peak, the interpretation would have to be pessimistic. However, since the ratio normally shows a rather good lead time, that January peak would not be inconsistent with a stock-market high to be made later this year. AWTrs ANTHONY W. TABELL DELAFIELD, HARVEY, TABELL INC. Dow-Jones Industrials (1200 p.m.) S & P Composite (1200 p.m.) Cumulative Index (5/10/84) 1160.07 159.18 1961. 05 No statement or expressIon of opinIon or any other matter herem contained Is. or is to be deemed to be, directly Of Indirectly, an oller or the soliCitation 01 an ollerlo buy or sell any secunty referred to or mentIOned The maHer IS presented merely for the convenience of the subscriber While we believe the sources of our information to be reliable, we In no way represent or guarantee the accuracy thereof norol the statements made herein Any action to be taken by the subscnber should be based on his own Investlgallon and Information Delafield, Harvey, Tabelt Inc, as a corporation and Its officers or employees may now have, or may later take, POSitions or trades In respect to any securities menhoned In thiS or any future Issue, and such POSition may be dillerent from any views now or hereaftere)(pressed In thiS or any other Issue Delafield, Harvey, Tabetl Inc, which IS registered with the SECas an Investment adVisor, may give advice to Its Investment advisory and othercuslomets Independently of any statements made In this or In any other Issue Further Information on any securUy mentioned herein IS available on reQuest