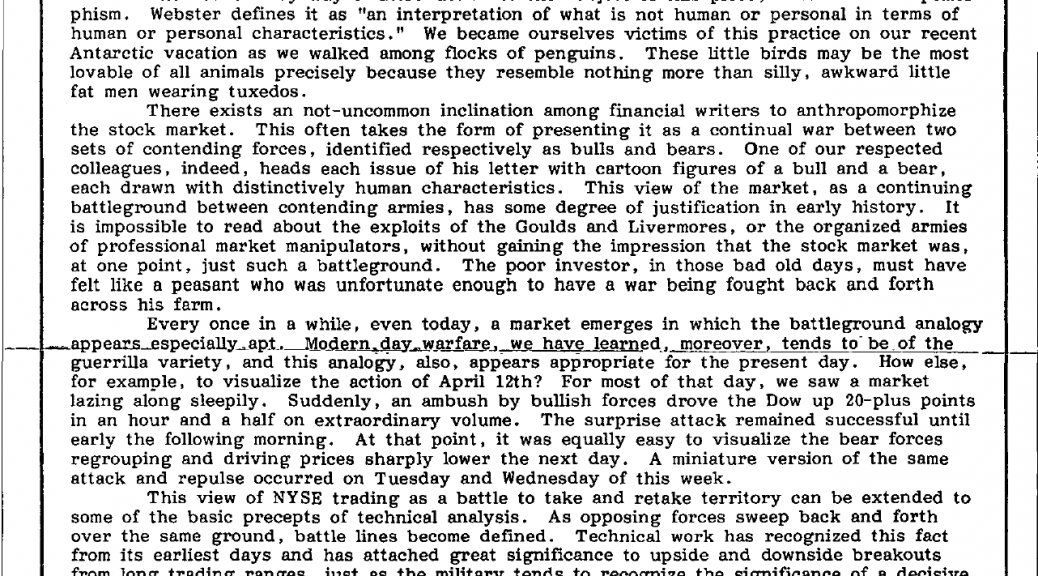 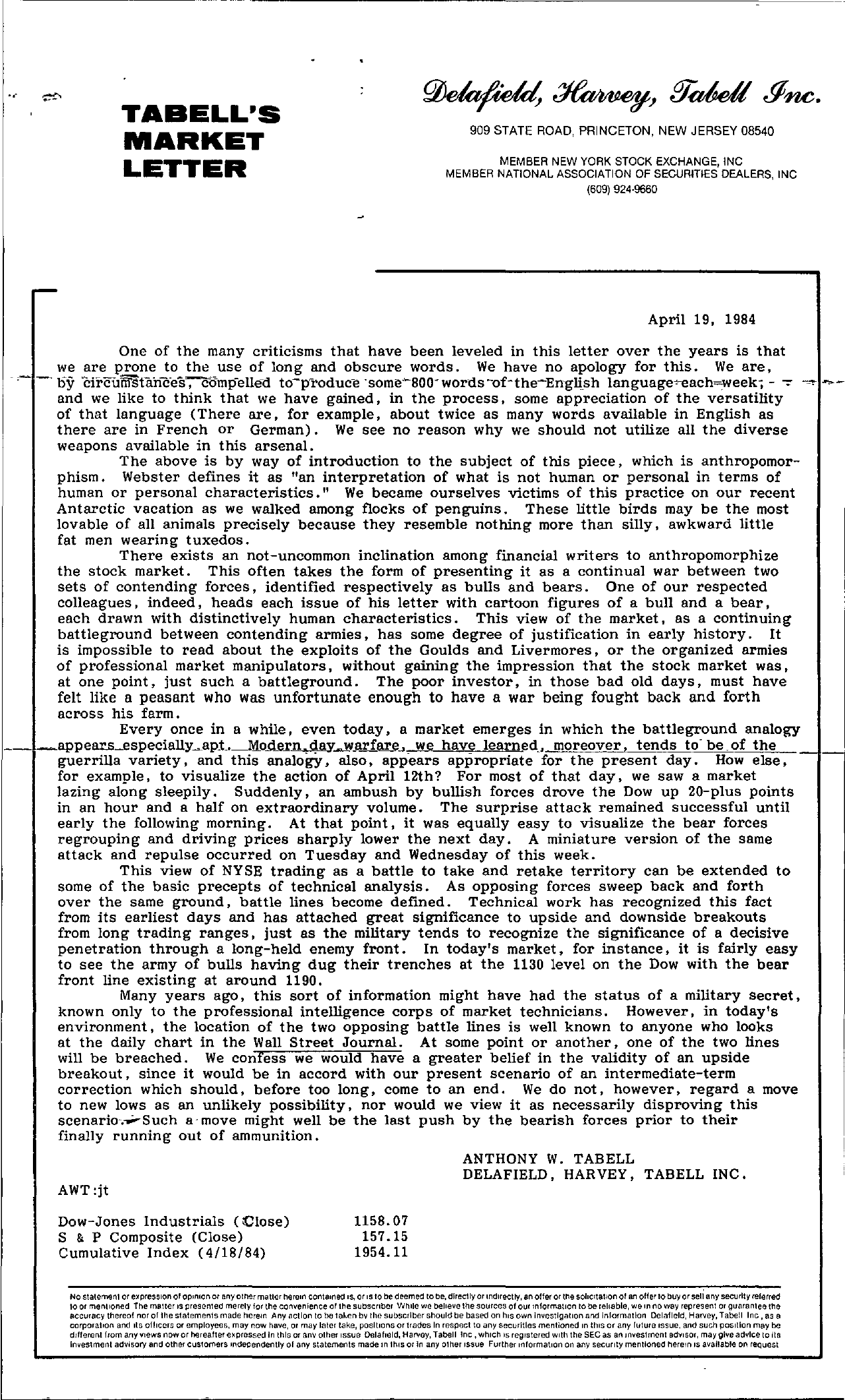 ',' TABELL'S MARKET LETTER 909 STATE ROAD, PRINCETON, NEW JERSEY 08540 MEMBER NEW YORK STOCK EXCHANGE, INC MEMBER NATIONAL. ASSOCIATION OF SECURITIES DEALERS, INC (609) 9249660 April 19. 1984 One of the many criticisms that have been leveled in this letter over the years is that we are prone to the use of long and obscure words, We have no apology for this. We are —. '' -oy circumstarices. compelled to-produce 'some'-800'worcts-of-the-Engltsh language'ElachCweek, – – and we like to think that we have gained. in the process. some appreciation of the versatility of that language (There are. for example. about twice as many words available in English as there are in French or German). We see no reason why we should not utilize all the diverse weapons available in this arsenal. The above is by way of introduction to the subject of this piece. which is anthropomor- phism. Webster defines it as an interpretation of what is not human or personal in terms of human or personal characteristics. We became ourselves victims of this practice on our recent Antarctic vacation as we walked among flocks of penguins. These little birds may be the most lovable of all animals precisely because they resemble nothing more than silly. awkward little fat men wearing tuxedos. There exists an not-uncommon inclination among financial writers to anthropomorphize the stock market. This often takes the form of presenting it as a continual war between two sets of contending forces. identified respectively as bulls and bears. One of our respected colleagues. indeed. heads each issue of his letter with cartoon figures of a bull and a bear. each drawn with distinctively human characteristics. This view of the market. as a continuing battleground between contending armies. has some degree of justification in early history. It is impossible to read about the exploits of the Goulds and Livermores. or the organized armies of professional market manipulators. without gaining the impression that the stock market was. at one point. just such a battleground. The poor investor. in those bad old days. must have felt like a peasant who was unfortunate enough to have a war being fought back and forth across his farm. Every once in a while. even today, a market emerges in which the battleground analogy appearJLespeciallyap.t..-M.ode.l'n day.,Jlcarfare., we have learned., moreover. tends to' be.of the guerrilla variety. and this analogy, also. app'ears appropriate for the present day. How else. for example. to visualize the action of April 12th For most of that day. we saw a market lazing along sleepily. Suddenly. an ambush by bullish forces drove the Dow up 20-plus points in an hour and a half on extraordinary volume. The surprise attack remained successful until early the following morning. At that point. it was equally easy to visualize the bear forces regrouping and driving prices sharply lower the next day. A miniature version of the same attack and repulse occurred on Tuesday and Wednesday of this week. This view of NYSE trading as a battle to take and retake territory can be extended to some of the basic precepts of technical analysis. As opposing forces sweep back and forth over the same ground. battle lines become defined. Technical work has recognized this fact from its earliest days and has attached great significance to upside and downside breakouts from long trading ranges. just as the military tends to recognize the significance of a decisive penetration through a long-held enemy front. In today's market. for instance. it is fairly easy to see the army of bulls having dug their trenches at the 1130 level on the Dow with the bear front line existing at around 1190. Many years ago. this sort of information might have had the status of a military secret. known only to the professional intelligence corps of market technicians. However. in today's environment. the location of the two opposing battle lines is well known to anyone who looks at the daily chart in the Wall Street Journal. At some point or another. one of the two lines will be breached. We confess we would have a greater belief in the validity of an upside breakout. since it would be in accord with our present scenario of an intermediate-term correction which should. before too long. come to an end. We do not. however. regard a move to new lows as an unlikely possibility. nor would we view it as necessarily disproving this scenario….. Such a' move might well be the last push by the bearish forces prior to their finally running out of ammunition. AWTjt ANTHONY W. TAB ELL DELAFIELD. HARVEY. TABELL INC. Dow-Jones Industrials (Close) S & P Composite (Close) Cumulative Index (4/18/84) 1158.07 157.15 1954.11 NO statement or epresslon 01 opinion or anyotMr matter herein contained IS, or IS 10 be deemed 10 be, directly or indirectly, an olfer or the soliCitation 01 an offer to buy or sell' any seC1Jrlty referred 100r mentioned The matter IS presented merely for the convenience of the subscrlbor While we believe the sources of our mformatlon lobe reliable, weln no way represent or guarantee the accuracy thereof narof the statements made herem Any action 10 be taen bv Ihe subscriber should be based on hiS own Investigation and Information Delafield, Harvey, Tabel! Inc, as a corporahon and Its oltlccrs or employees, may now have, or may later take, positions or trades In respect to any securities mentioned In thiS or any lulU/e Issue, and such pOSItion may be dillerantirorn any Vlews now or herealtefeprcssed In this or anI,' other Issue Delafield, Harvey, Tabell Inc, which IS registered With the SEC as an mvestment adVisor, may give advice to lis Investment advisory and other customers Independenlly of any statements made m thiS Olin any other Issue Further mlormatlon on any secuflly mentioned herem IS available on reQuest