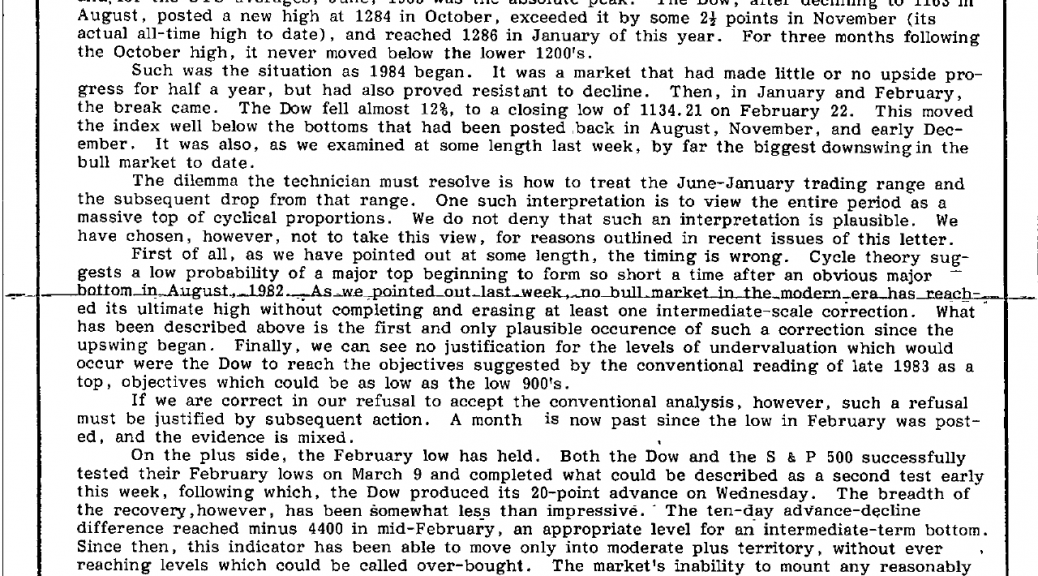 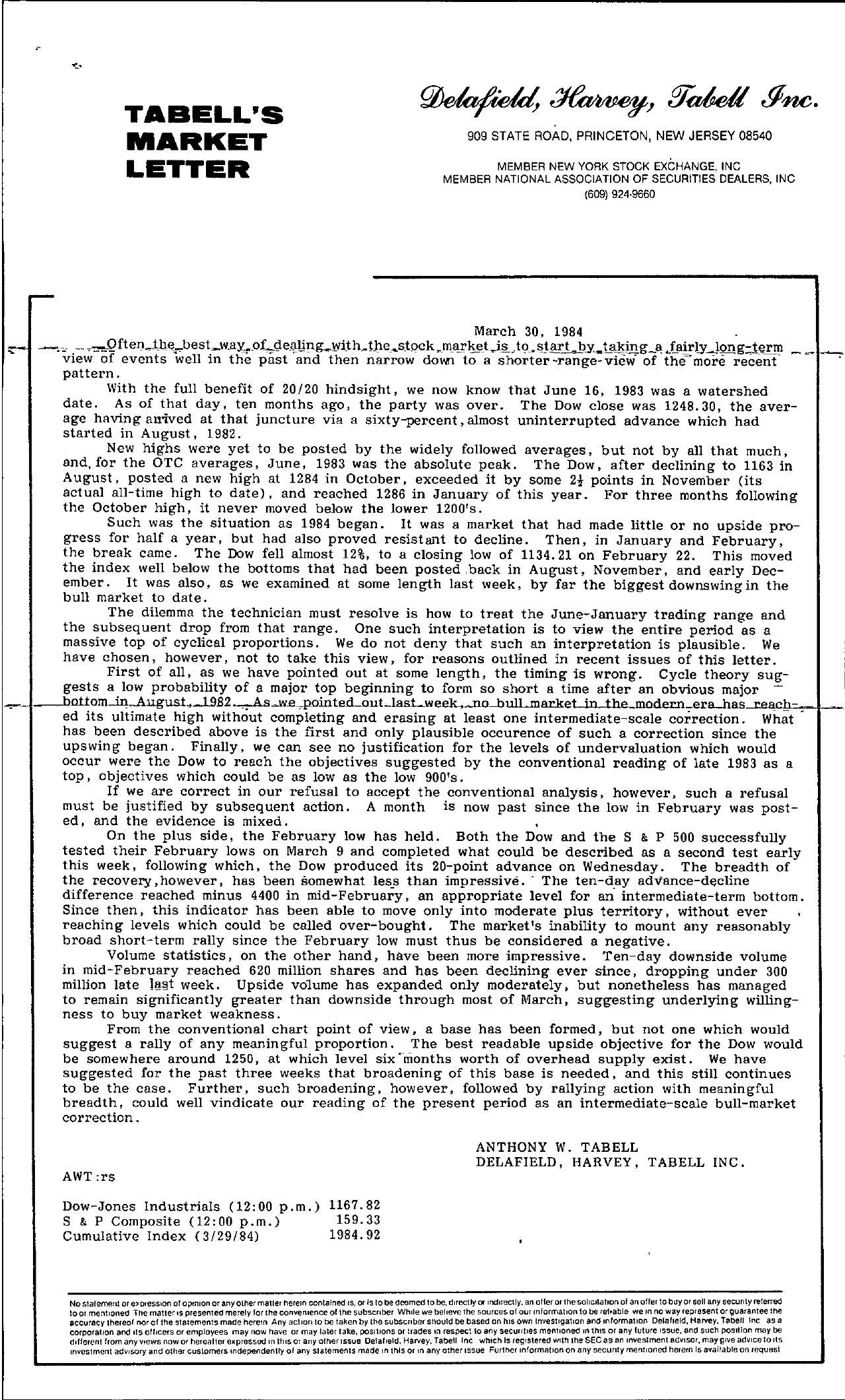 TABELL'S MARKET LETTER 909 STATE ROAD, PRINCETON, NEW JERSEY 08540 MEMBER NEW YORK STOCK EXCHANGE, INC MEMBER NATIONAL ASSOCIATION OF SECURITIES DEALERS, INC (609) 924-9660 March 30, 1984 I . — QfteJ1tbebestw.ay.ofde.;;tling\ViththestQckmrlg'ti.)ostl'I't).Yffil'Inga.Lairlyongtr'!' view of events well in the past and then narrow do to a shorter-range-view- of the-'more recent pattern. With the full benefit of 20/20 hindsight, we now know that June 16, 1983 was a watershed date. As of that day, ten months ago, the party was over. The Dow close was 1248.30, the aver- age having anived at that juncture via a sixty-percent, almost uninterrupted advance which had started in August, 1982. New highs were yet to be posted by the widely followed averages, but not by all that much, and, for the OTC averages, June, 1983 was the absolute peak. The Dow, after declining to 1163 in August, posted a new high at 1284 in October, exceeded it by some 2t points in November (its actual all-time high to date), and reached 1286 in January of this year. For three months following the October high, it never moved below the lower 1200's. Such was the situation as 1984 began. It was a market that had made little or no upside pro- gress for half a year, but had also proved resista;1t to decline. Then, in January and February, the break came. The Dow fell almost 12, to a closing low of 1134.21 on February 22. This moved the index well below the bottoms that had been posted ,back in August, November, and early Dec- ember. It was also, as we examined at some length last week, by far the biggest downswing in the bull market to date. The dilemma the technician must resolve is how to treat the June-January trading range and the subsequent drop from that range. One such interpretation is to view the entire period as a massive top of cyclical proportions. We do not deny that such an interpretation is plausible. We have chosen, however, not to take this view, for reasons outlined in recent issues of this letter. First of all, as we have pointed out at some length, the timing is wrong. Cycle theory sug- gests a low probability of a major top beginning to form so short a time after an obvious major — bo1tomjn…August….19B2.–,-Asw.e..,.pointedollLlasLweek.D1Lbu11marlet in tbemodern.,.er!Lhas–'!ea,c!-,- ed its ultimate high without completing and erasing at least one intermediate-scale correction. What has been described above is the first and only plausible occurence of such a correction since the upswing began. Finally, we can see no justification for the levels of undervaluation which would occur were the Dow to reach the objectives suggested by the conventional reading of late 1983 as a top, objectives which could be as low as the low 900's. If we are correct in our refusal to accept the conventional analysis, however, such a refusal must be justified by subsequent action. A month is now past since the low in February was post- ed, and the evidence is mixed. On the plus side, the February low has held. Both the Dow and the S & P 500 successfully tested their February lows on March 9 and completed what could be described as a second test early this week, following which, the Dow produced its 20-point advance on Wednesday. The breadth of the recovery, however, has been somewhat less than impressive .. The ten-day advance-decline difference reached minus 4400 in mid-February, an appropriate level for an intermediate-term boltom. Since then, this indicator has been able to move only into moderate plus territory, without ever reaching levels which could be called over-bought. The market's inability to mount any reasonably broad short-term rally since the February low must thus be considered a negative. Volume statistics, on the other hand, have been more impressive. Ten-day downside volume in mid-February reached 620 million shares and has been declining ever since, dropping under 300 million late !!\t week. Upside v01ume has expanded only moderately, but nonethe1ess has managed to remain significantly greater than downside through most of March, suggesting underlying willing- ness to buy market weakness. From the conventional chart point of view, a base has been formed, but not one which would suggest a rally of any meaningful proportion. The best readable upside objective for the Dow would be somewhere around 1250, at which level six-months worth of overhead supply exist. We have suggested for the past three weeks that broadening of this base is needed, and this still continues to be the case. Further, such broadening, however, followed by rallying action with meaningful breadth, could well vindicate our reading of the present period as an intermediate-scale bull-market correction. AWTrs ANTHONY W. TAB ELL DELAFIELD, HARVEY, TAB ELL INC. Dow-Jones Industrials (12 00 p. m. ) 1167.82 S & P Composite (1200 p.m.) 159.33 Cumulative Index (3/29/84) 1984.92 No statement or eoresSjon of opInion or anyolher matter herein contained IS, or Is to be deemed to be, directly or Indirectly. an oller or the solicItatIon of an offer to buyor sell any security relerred to or mentIoned The maller IS presented merely lor the convenience of the subscnber While we believe the sources 01 our tnformatlon to be reliable we In no way represent or guarantee the accuracy thereof norof the statements made herem Any action to be taken by the subSCriber Should be based on hiS own InvestigatIon and mformatlOn Delafield, Harvey, Tabell Inc as a corporatIOn anellts olltcers or employees may now have or may laler take, poSitions or trades m respect to any seculltles mentioned 10 thIS or any future Issue, and such pOSlllon may be different from any views nowor heleafler e.pressec! In thiS 01 any other Issue DelafIeld, Harvey, Tabell tnc whIch Is registered With the SEC as an Investment adVisor, may give adVice to Its Investment adVISOry and other customers mdependently of any statements made In this or 10 any other Issue Further information on any secuntymentloned herein Is available on request