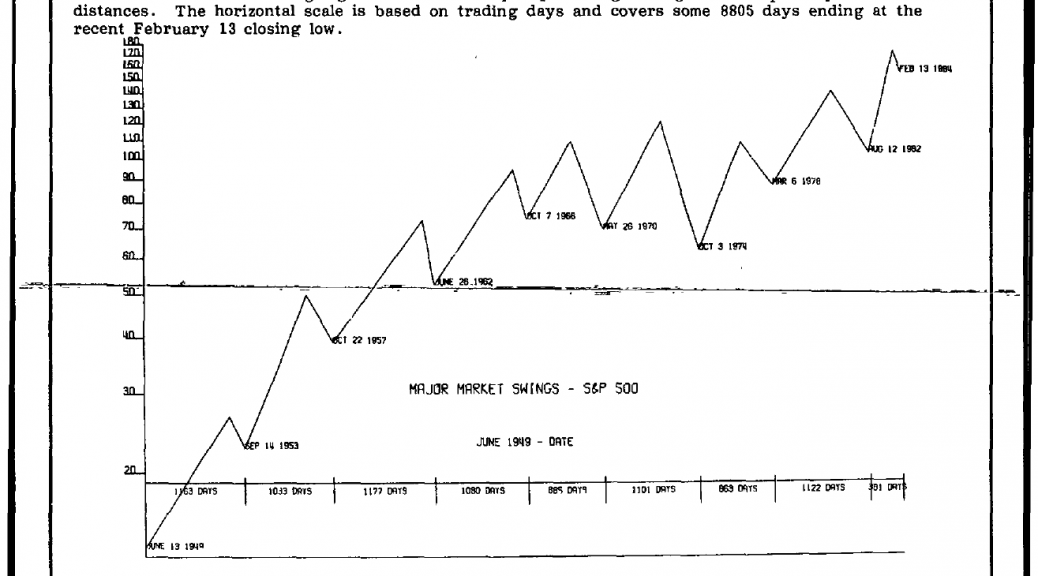 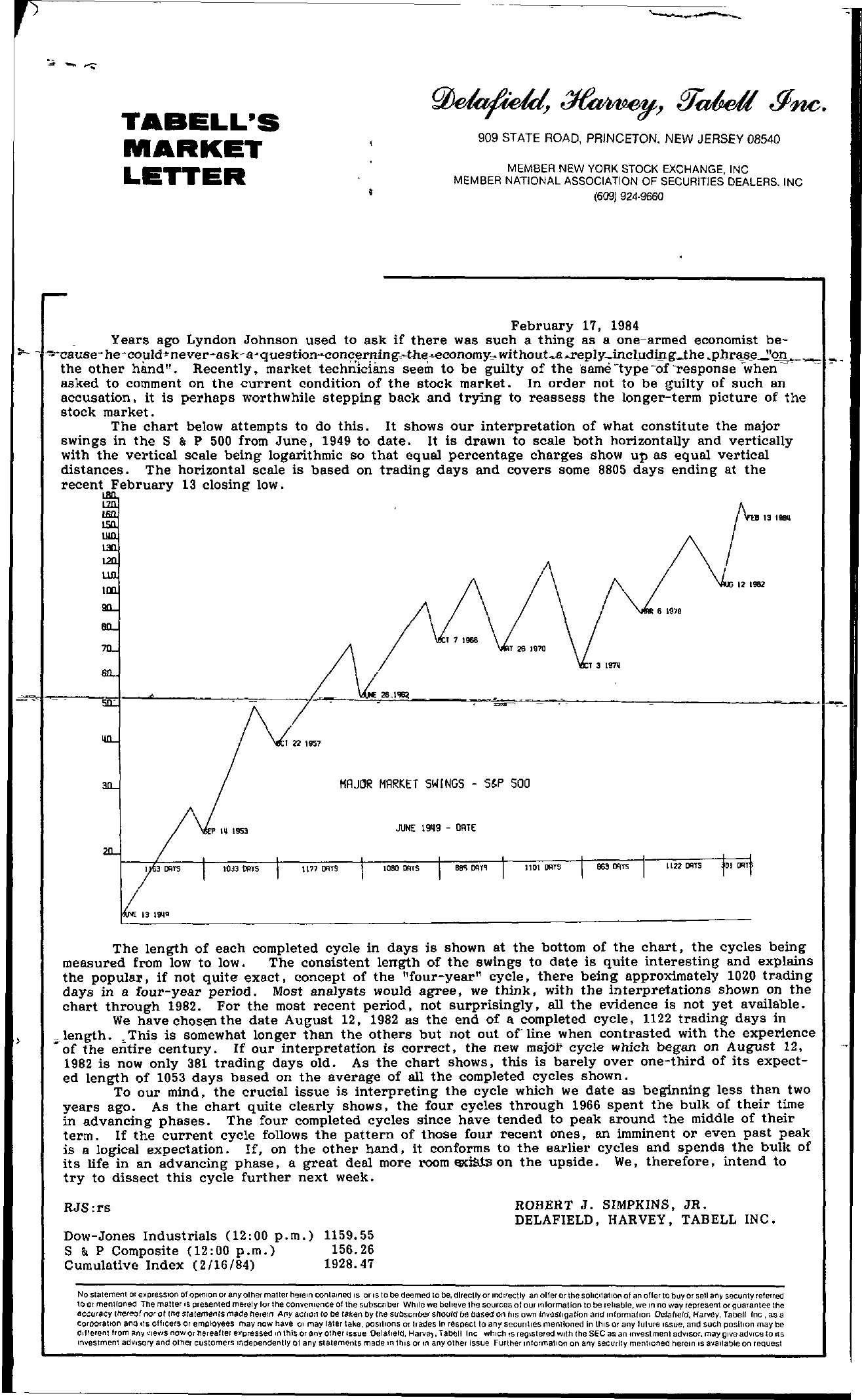 — TABELL'S MARKET LETTER 909 STATE ROAD, PRINCETON, NEW JERSEY 08540 , MEMBER NEW YORK STOCK EXCHANGE, INC MEMBER NATIONAL ASSOCIATION OF SECURITIES DEALERS. INC (609) 924-9660 February 17, 1984 Years ago Lyndon Johnson used to ask if there was such a thing as a one-armed economist be….. – 'cause- he' cold never-ask' a' quest-ion-con;l!;'r!,lngAheconomy withouta .replyincludip gthe .pl1r!!s'm…. the other hand. Recently, market technicians seem to be guilty of the 'same -type -of 'response -when — – — asked to comment on the current condition of the stock market. In order not to be guilty of such an accusation, it is perhaps worthwhile stepping back and trying to reassess the longer-term picture of the stock market. The chart below attempts to do this. It shows our interpretation of what constitute the major swings in the S & P 500 from June, 1949 to date. It is drawn to scale both hOrizontally and vertically with the vertical scale being logarithmic so that equal percentage charges show up as equal vertical distances. The horizontal scale is based on trading days and covers some 8805 days ending at the recent February 13 closing low. \II, 1953 MAJOR MARKET 5WfNGS – 5&P sao 1177 OATS JUNE 19119 – DATE 1080 DRlS 1101 DRlS The length of each completed cycle in days is shown at the bottom of the chart, the cycles being measured from low to low. The consistent length of the swings to date is quite interesting and explains the popular, if not quite exact, concept of the four-year cycle, there being approximately 1020 trading days in a four-year period. Most analysts would agree, we think, with the interpretations shown on the chart through 1982. For the most recent period, not surprisingly, all the evidence is not yet available. We have chosen the date August 12, 1982 as the end of a completed cycle, 1122 trading days in , length. 0 This is somewhat longer than the others but not out of'line when contrasted with the experience – of the entire century. If our interpretation is correct, the new major cycle which began on August 12, 1982 is now only 381 trading days old. As the chart shows, this is barely over one-third of its expect- ed length of 1053 days based on the average of all the completed cycles shown. To our mind, the crucial issue is interpreting the cycle which we date as beginning less than two years ago. As the chart quite clearly shows, the four cycles through 1966 spent the bulk of their time in advancing phases. The four completed cycles since have tended to peak around the middle of their term. If the current cycle follows the pattern of those four recent ones, an imminent or even past peak is a logical expectation. If, on the other hand, it conforms to the earlier cycles and spends the bulk of its life in an advancing phase, a great deal more room lXmn. on the upside. We, therefore, intend to try to dissect this cycle further next week. RJSrs Dow-Jones Industrials (12 00 p. m.) 1159.55 S & P Composite (1200 p.m.) 156.26 Cumulative Index (2/16/84) 1928.47 ROBERT J. SIMPKINS, JR. DELAFIELD, HARVEY, TAB ELL INC. No statement or expression of opinion or any other matler herein conlalned IS or IS to be deemed to be, directly or Indirectly an oller Or the soliCitation of an offer to buy or sell an secunly referred 10 or menlloned The mailer IS presented merely for the convenience of the subscriber While we beheve fhe sources of our Information to be reliable, we In no way represent or guarantee the accuracy thereof norof tM statements made herem Any action to be taken bytne sUOscnbershould be based on tliS own Investlga/ion and Information Delafield, Harvey, Tabel( Inc, a; a Corporation and Its officers or employees may now have 01 may later take, poSitrons or trades In respect to any seCUrities mentioned In thiS or any luture Issue, and such posItion may be dlllerent from any Iews nOwor heleafter e)'pressed In this or any other Issue Delafield, Harve, Ta1I tnc which IS regIstered With the SEC as an mvestmen! adVisor, may glveadvrce to lIS Investment adVISOry and other customers Independenlly ot any statements made In thiS or m any other Issue Further mformalion on any security mentioned herem IS avaltable on request