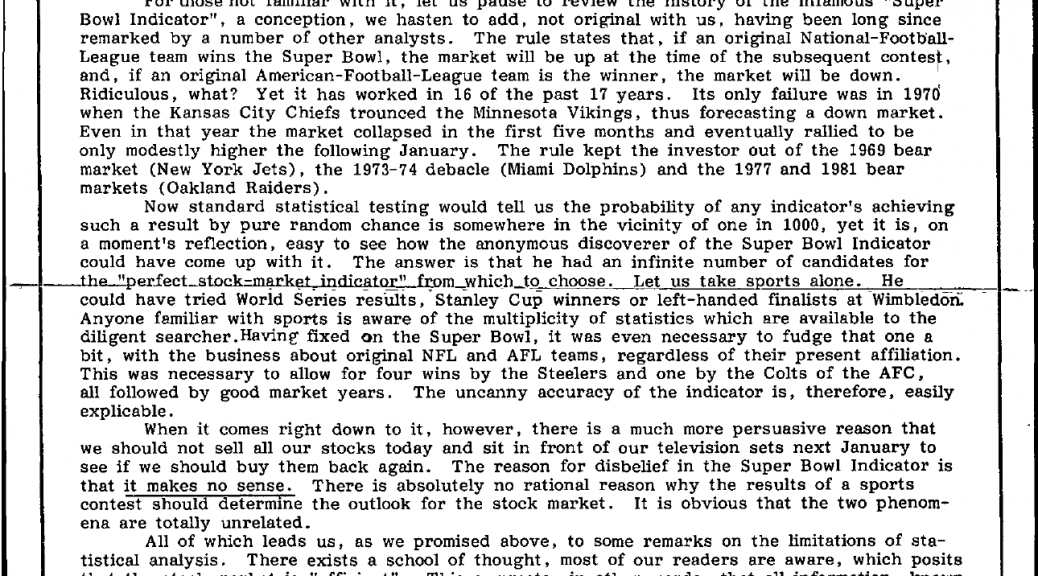 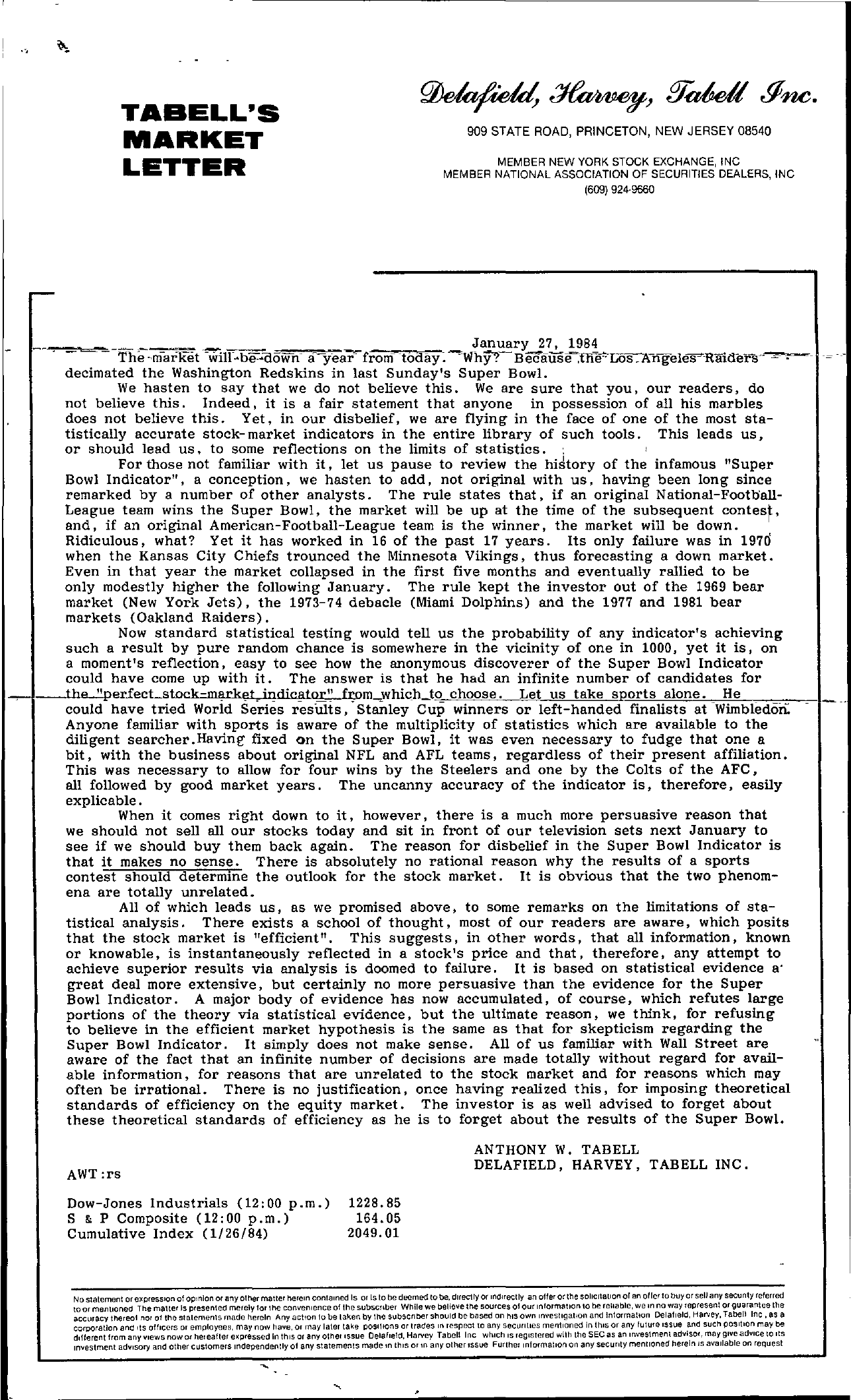 .-. TABELL'S MARKET LETTER 909 STATE ROAD, PRINCETON, NEW JERSEY 08540 MEMBER NEW YORK STOCK EXCHANGE, INC MEMBER NATIONAL ASSOCIATION OF SECURITIES DEALERS, INC (609) 924-9660 -'000 -.– . January 27, 198 The -marKet willbecc-down- a year- from tOday. -Why Because;t1ieLOs KngelRaidelS—- decimated the Washington Redskins in last Sunday's Super Bowl. We hasten to say that we do not believe this. We are sure that you, our readers, do not believe this. Indeed, it is a fair statement that anyone in possession of all his marbles does not believe this. Yet, in our disbelief, we are flying in the face of one of the most sta- tistically accurate stock- market indicators in the entire library of such tools. This leads us, or should lead us. to some reflections on the limits of statistics. . ' For those not familiar with it, let us pause to review the history of the infamous Super Bowl Indicator, a conception, we hasten to add, not original with us, having been long since remarked by a number of other analysts. The rule states that, if an original National-Football- League team wins the Super Bowl, the market will be up at the time of the subsequent contest, and, if an original American-Football-League team is the winner, the market will be down. Ridiculous, what Yet it has worked in 16 of the past 17 years. Its only failure was in 1970 when the Kansas City Chiefs trounced the Minnesota Vikings, thus forecasting a down market. Even in that year the market collapsed in the first five months and eventually rallied to be only modestly higher the following January. The rule kept the investor out of the 1969 bear market (New York Jets), the 1973-74 debacle (Miami Dolphins) and the 1977 and 1981 bear markets (Oakland Raiders). Now standard statistical testing would tell us the probability of any indicator's achieving such a result by pure random chance is somewhere in the vicinity of one in 1000, yet it is, on a moment's reflection, easy to see how the anonymous discoverer of the Super Bowl Indicator could have come up with it. The answer is that he had an infinite number of candidates for 1he-periecLstock-markeLindicB.tfromwhichto choose. Let us take S20rts alone. He could have tried Worid Seris resuhs, -Stanley Cup winners or left-handed finalists at -Wimbledon Anyone familiar with sports is aware of the multiplicity of statistics which are available to the diligent searcher. Havine- fixed on the Super Bowl, it was even necessary to fudge that one a bit, with the business about original NFL and AFL teams, regardless of their present affiliation. This was necessary to allow for four wins by the Steelers and one by the Colts of the AFC, all followed by good market years. The uncanny accuracy of the indicator is, therefore, easily explicable. When it comes right down to it, however, there is a much more persuasive reason that we should not sell all our stocks today and sit in front of our television sets next January to see if we should buy them back again. The reason for disbelief in the Super Bowl Indicator is that it makes no sense. There is absolutely no rational reason why the results of a sports contest should determine the outlook for the stock market. It is obvious that the two phenom- ena are totally unrelated. All of which leads us, as we promised above, to some remarks on the limitations of sta- tistical analysis. There exists a school of thought, most of our readers are aware, which posits that the stock market is efficient. This suggests, in other words, that all information, known or knowable, is instantaneously reflected in a stock's price and that, therefore, any attempt to achieve superior results via analysis is doomed to failure. It is based on statistical evidence a' great deal more extensive, but certainly no more persuasive than the evidence for the Super Bowl Indicator. A major body of evidence has now accumulated, of course, which refutes large portions of the theory via statistical evidence, but the ultimate reason, we think, for refusing to believe in the efficient market hypothesis is the same as that for skepticism regarding the Super Bowl Indicator. It simply does not make sense. All of us familiar with Wall Street are aware of the fact that an infinite number of decisions are made totally without regard for avail- able information, for reasons that are unrelated to the stock market and for reasons which may often be irrational. There is no justification, once having realized this, for imposing theoretical standards of efficiency on the equity market. The investor is as well advised to forget about these theoretical standards of efficiency as he is to forget about the results of the Super Bowl. AWT rs ANTHONY W. TABELL DELAFIELD, HARVEY, TAB ELL INC. Dow-Jones Industrials (12 00 p.m.) 1228.85 S & P Composite (12 00 p. m. ) 164.05 Cumulative Index (1/26/84) 2049.01 No statement or cpreSSlon of opinion or any other mattcr herein contained Is or Is to be deemed to be, directly or indirectly an oller or the soliCitation 01 an offer to buyor sel! any secunty referred to or mentioned The malter Is presented merely for the converllcnce of the subscnber While we believe the sources 01 our Information to be reliable, we In no way represent or guaranlee the accuracy thereot nor 01 the slalements made herein Any action to be taken by the subscriber should be based on hiS own investigation and Intormatlon Delafield, Harvey, TaooU Inc, as a corporation and Its officers or employees, may now hilve, or may laler take pOSlhons or trades m respect to any securities mentioned In thiS or any tulure Issue and such pOSition may be dillerent from any views now or hereafter epressed In thiS or anyolhet Issue Delafield, Harvey Tabel! Inc which IS regIStered w!lh the SECas an Investment advisor, may give advice to liS Investment adVISOry and othercuslomers Independently of any statements made In thiS or In any other Issue Further Informal Ion on any secunty mentioned herein IS available on request