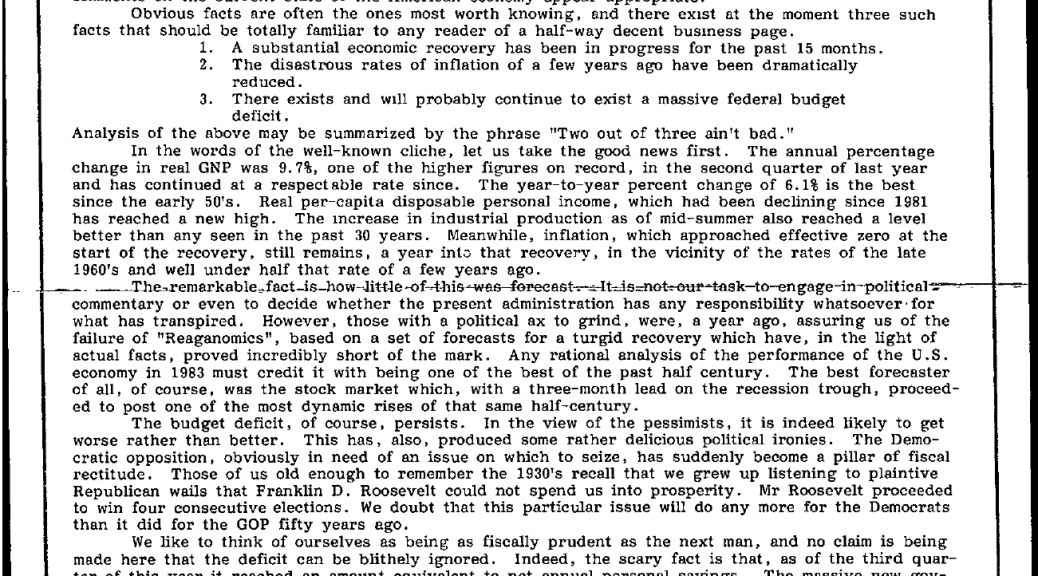 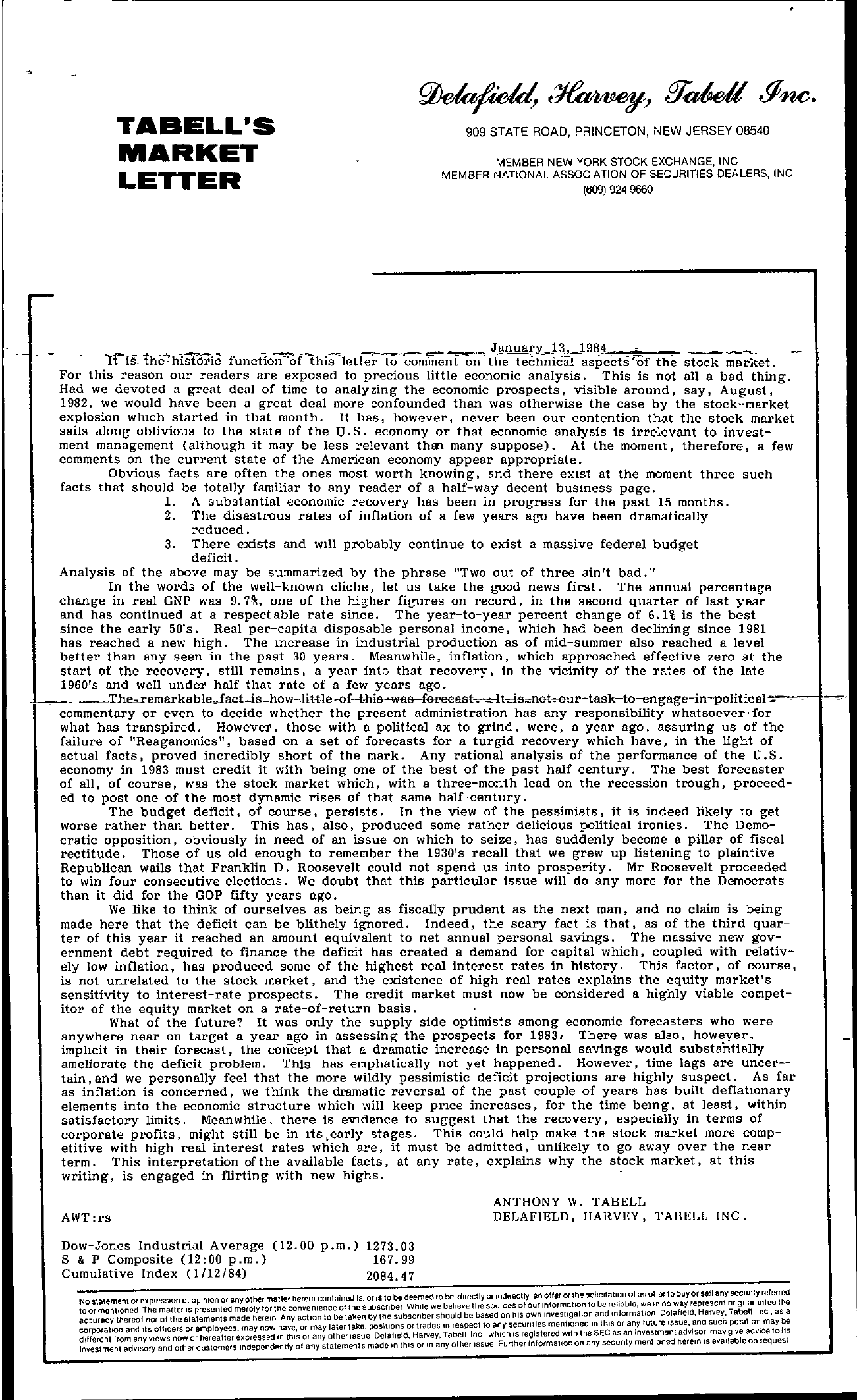 TABELL'S MARKET LETTER 909 STATE ROAD, PRINCETON, NEW JERSEY 08540 MEMBER NEW YORK STOCK EXCHANGE, INC MEMBER NATIONAL ASSOCIATION OF SECURITIES DEALERS, INC (609) 9249660 L..-. -'- –'- .. .JJ!rJ.!!!!!'y13,1984 —,…- It is- thehistoric function-of this -letter to cominenton the technical aspects-ofthe stock market. For this reason our readers are exposed to precious little economic analysis. This is not all a bad thing. Had we devoted a great denl of time to analyzing the economic prospects, visible around, say, August, 1982, we would have been a great deal more confounded than was otherwise the case by the stock-market explosion WhICh started in that month. It has. however, never been our contention that the stock market sails along oblivious to the state of the U. S. economy or that economic analysis is irrelevant to invest- ment management (although it may be less relevant thm. many suppose). At the moment, therefore, a few comments on the current state of the American economy appear appropriate. Obvious facts are often the ones most worth knowing, and there eXIst at the moment three such facts that should be totaUy familiar to any reader of a half-way decent busmess page. 1. A sUbstantial economic recovery has been in progress for the past 15 months. 2. The disastrous rates of inflation of a few years ago have been dramaticaUy reduced. 3. There exists and WIU probably continue to exist a massive federal budget deficit. Analysis of the above may be summarized by the phrase Two out of three ain't bad. In the words of the weU-known cliche. let us take the good news first. The annual percentage change in real GNP was 9.7. one of the higher figures on record. in the second quarter of last year and has continued at a respectable rate since. The year-to-year percent change of 6.1 is the best since the early 50's. Real per-capita disposable personal income, which had been declining since 1981 has reached a new high. The Increase in industrial production as of mid-summer also reached a level better than any seen in the past 30 years. Meanwhile. inflation, which approached effective zero at the start of the recovery, still remains, a year int.. that recovery, in the vicinity of the rates of the late 1960's and weU under half that rate of a few years ago. T.he..remarkablefactishow-JiH1e -of-t-hiss-fI'eCast. – It-dsnot-.-eur-tlsk-to-engage-in-political–.—f commentary or even to decide whether the present administration has any responsibility whatsoever' for what has transpired. However, those with a political ax to grind, were, a year ago, assuring us of the failure of Reaganomics, based on a set of forecasts for a turgid recovery which have, in the light of actual facts, proved incredibly short of the mark. Any rational analysis of the performance of the U. S. economy in 1983 must credit it with being one of the best of the past half century. The best forecaster of all, of course, was the stock market which, with a three-month lead on the recession trough, proceed- ed to post one of the most dynamic rises of that same half-century. The budget deficit. of course. persists. In the view of the pessimists, it is indeed likely to get worse rather than better. This has, also, produced some rather delicious political ironies. The Demo- cratic opposition, obviously in need of an issue on which to seize, has suddenly become a pillar of fiscal rectitude. Those of us old enough to remember the 1930's recall that we grew up listening to plaintive Republican wails that Franklin D. Roosevelt could not spend us into prosperity. Mr Roosevelt proceeded to win four consecutive elections. We doubt that this particular issue will do any more for the Democrats than it did for the GOP fifty years ago. We like to think of ourselves as being as fiscally prudent as the next man. and no claim is being made here that the deficit can be blithely ignored. Indeed. the scary fact is that. as of the third quar- ter of this year it reached an amount equivalent to net annual personal savings. The massive new gov- ernment debt required to finance the deficit has created a demand for capital which. coupled with relativ- ely low inflation, has produced some of the highest real interest rates in history. This factor, of course, is not unrelated to the stock market, and the existence of high real rates explains the equity market's sensitivity to interest-rate prospects. The credit market must now be considered a highly viable compet- itor of the equity market on a rate-of-return basis. What of the future It was only the supply side optimists among economic forecasters who were anywhere near on target a year ago in assessing the prospects for 1983 There was also, howyer, implIcit in their forecast, the concept that a dramatic increase in personal savings would substantially ameliorate the deficit problem. ThiS has emphatically not yet happened. However, time lags are uneer– tain, and we personally feel that the more wildly pessimistic deficit projections are highly suspect. As far as inflation is concerned, we think the dramatic reversal of the past couple of years has built deflatIonary elements into the economic structure which will keep prIce increases, for the time beIng, at least, within satisfactory limits. Meanwhile, there is eVIdence to suggest that the recovery, especially in terms of corporate profits, might still be in ItS,early stages. This could help make the stock market more comp- etitive with high real interest rates which are, it must be admitted, unlikely to go away over the near term. This interpretation of the available facts. at any rate, explains why the stock market, at this writing, is engaged in flirting with new highs. AWTrs ANTHONY W. TABELL DELAFIELD, HARVEY, TABELL INC. Dow-Jones Industrial Average (12.00 p.m.) 1273.03 S & P Composite (1200 p.m.) 167.99 Cumulative Index (1/12/84) 2084.47