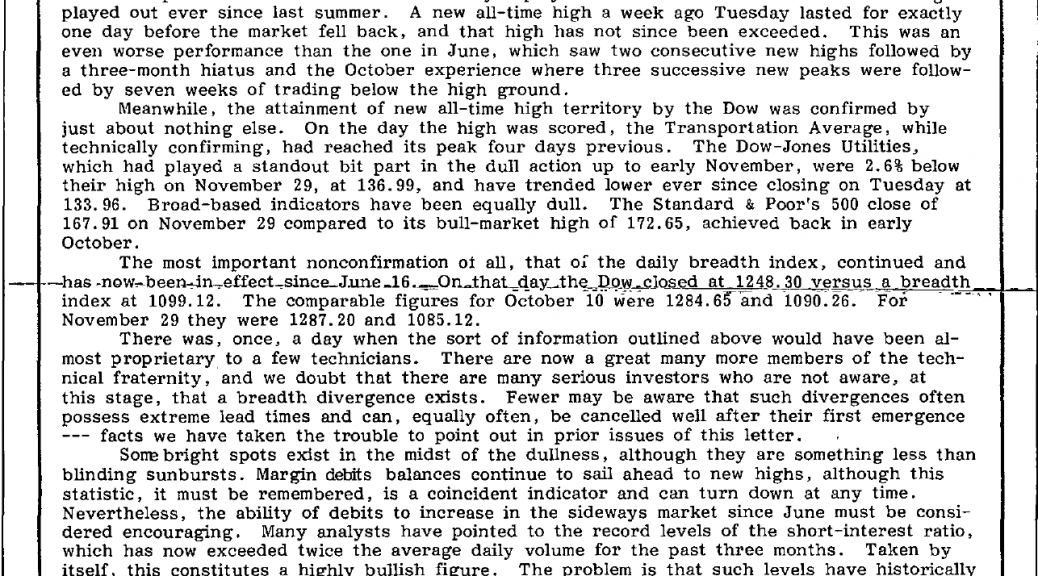 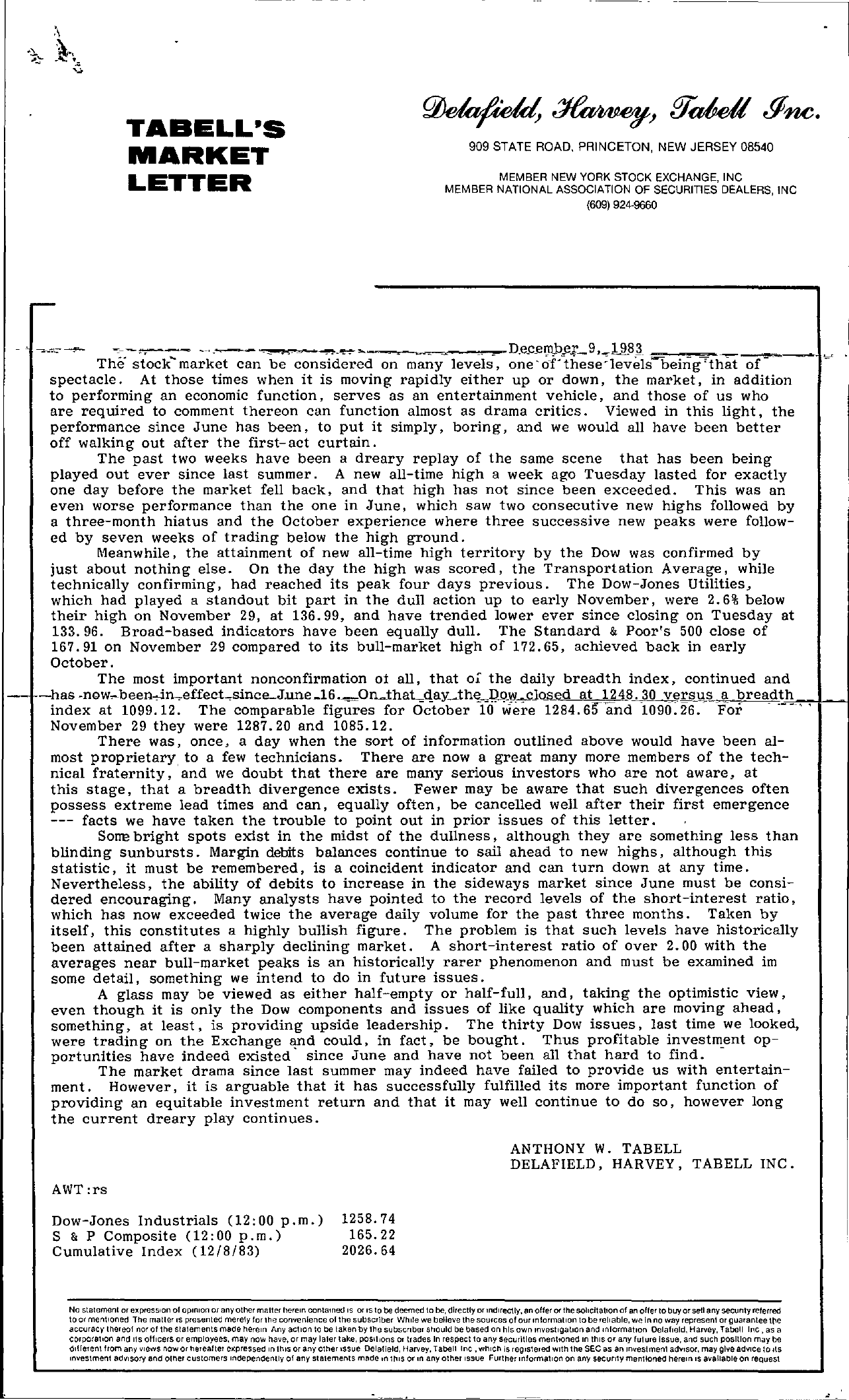 TABELL'S MARKET LETTER 909 STATE ROAD, PRINCETON, NEW JERSEY 08540 MEMBER NEW YORK STOCK EXCHANGE, INC MEMBER NATIONAL ASSOCIATION OF SECURITIES DEALERS, INC (609) 9249660 ''' —,.,.—- – . – . …,.,.. — . D.e.c.empftl'9,J- 9Bl. – 'c' or'The' stock'market can be considered on many levels, one' ()'f'-these;levelsbeing 'that spectacle. At those times when it is moving rapidly either up or down, the market, in addition to performing an economic function, serves as an entertainment vehicle, and those of us who are required to comment thereon can function almost as drama critics. Viewed in this light, the performance since June has been, to put it simply, boring, and we would all have been better off walking out after the first-act curtain. The past two weeks have been a dreary replay of the same scene that has been being played out ever since last summer. A newall-time high a week ago Tuesday lasted for exactly one day before the market fell back, and that high has not since been exceeded. This was an even worse performance than the one in June. which saw two consecutive new highs followed by a three-month hiatus and the October experience where three successive new peaks were follow- ed by seven weeks of trading below the high ground. Meanwhile, the attainment of newall-time high territory by the Dow was confirmed by just about nothing else. On the day the high was scored, the Transportation Average, while technically confirming, had reached its peak four days previous. The Dow-Jones Utilities, which had played a standout bit part in the dull action up to early November, were 2.6 below their high on November 29, at 136.99, and have trended lower ever since closing on Tuesday at 133.96. Broad-based indicators have been equally dull. The Standard & Poor's 500 close of 167.91 on November 29 compared to its bull-market high of 172.65, achieved back in early October. The most important nonconfirmation 01 all, that 0; the daily breadth index, continued and 1 – –has .now-been..jneffect.,sinceJ.une16. Ontha!ayth,.))o.jY..,!!losed at 124B…)0 versus a breadt-.-ch,..f–j index at 1099.12. The comparable figures for October 10 were 1284.65 and '1090 26. For '.- – .. November 29 they were 1287.20 and 1085.12. There was, once, a day when the sort of information outlined above would have been al- most proprietary to a few technicians. There are now a great many more members of the tech- nical fraternity, 'and we doubt that there are many serious investors who are not aware, at this stage, that a breadth divergence exists. Fewer may be aware that such divergences often possess extreme lead times and can, equally often, be cancelled well after their first emergence — facts we have taken the trouble to point out in prior issues of this letter. Sorre bright spots exist in the midst of the dullness, although they are something less than blinding sunbursts. Margin debits balances continue to sail ahead to new highs, although this statistic, it must be remembered, is a coincident indicator and can turn down at any time. Nevertheless, the ability of debits to increase in the sideways market since June must be consi- dered encouraging. Many analysts have pointed to the record levels of the short-interest ratio, which has now exceeded twice the average daily volume for the past three months. Taken by itself, this constitutes a highly bullish figure. The problem is that such levels have histOrically been attained after a sharply declining market. A short-interest ratio of over 2.00 with the averages near bull-market peaks is an historically rarer phenomenon and must be examined im some detail, something we intend to do in future issues. A glass may be viewed as either half-empty or half-full, and, taking the optimistic view, even though it is only the Dow components and issues of like quality which are moving ahead, something, at least, is providing upside leadership. The thirty Dow issues, last time we looked, were trading on the Exchange and could, in fact, be bought. Thus profitable investment op- portunities have indeed existed since June and have not been all that hard to find. The market drama since last summer may indeed have failed to provide us with entertain- ment. However, it is arguable that it has successfully fulfilled its more important function of providing an equitable investment return and that it may well continue to do so, however long the current dreary play continues. AWT rs ANTHONY W. TAB ELL DELAFIELD, HARVEY, TAB ELL INC. Dow-Jones Industrials (12 00 p. m.) 1258.74 S & P Composite (12 00 p. m. ) 165.22 Cumulative Index (12/8/83) 2026.64 No statement Of e)(preSSlon 01 OPinion Of any other matter herein contained IS or IS 10 be deemed 10 be, directly Of mdlreclly, an offer O!' the sohclta\!on of an oHer to buy or sell any secunty referred to or mentioned The matter IS presented merely for the convenience 01 the subscriber While we believe the sources of our mlormatlon to be reliable, we In no way represent or guarantee tM accuracy thcreol nor 01 the statements made herem Any action to be taken bylne subscnber sl10uld be based on I1lsown mvestlgatlon and mlormatlon Delafield, Harvey, labell Inc, as a corporailon and ItS officers or employees, may now nave, or may later take, positions or trades In respect to any securIties menltoned In tl1lso, any fulure Issue, and such position may be dl!lerent hom any views nowor helealter expressed In Ihls or any other Issue Delafield, Harvey, label! Inc, whiCh Is registered With the SEC as an Investment advisor, may give adVice to Its Investment adVisory and other customers Independently 01 any statements made In lhls or In any other Issue Further mformatlon on any secunty menHoned herem IS available on request