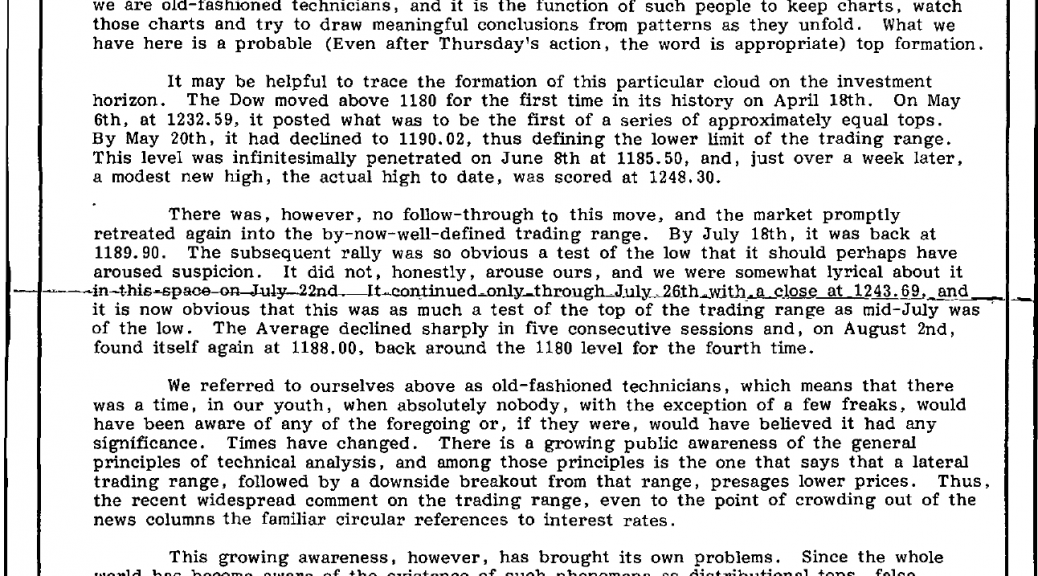 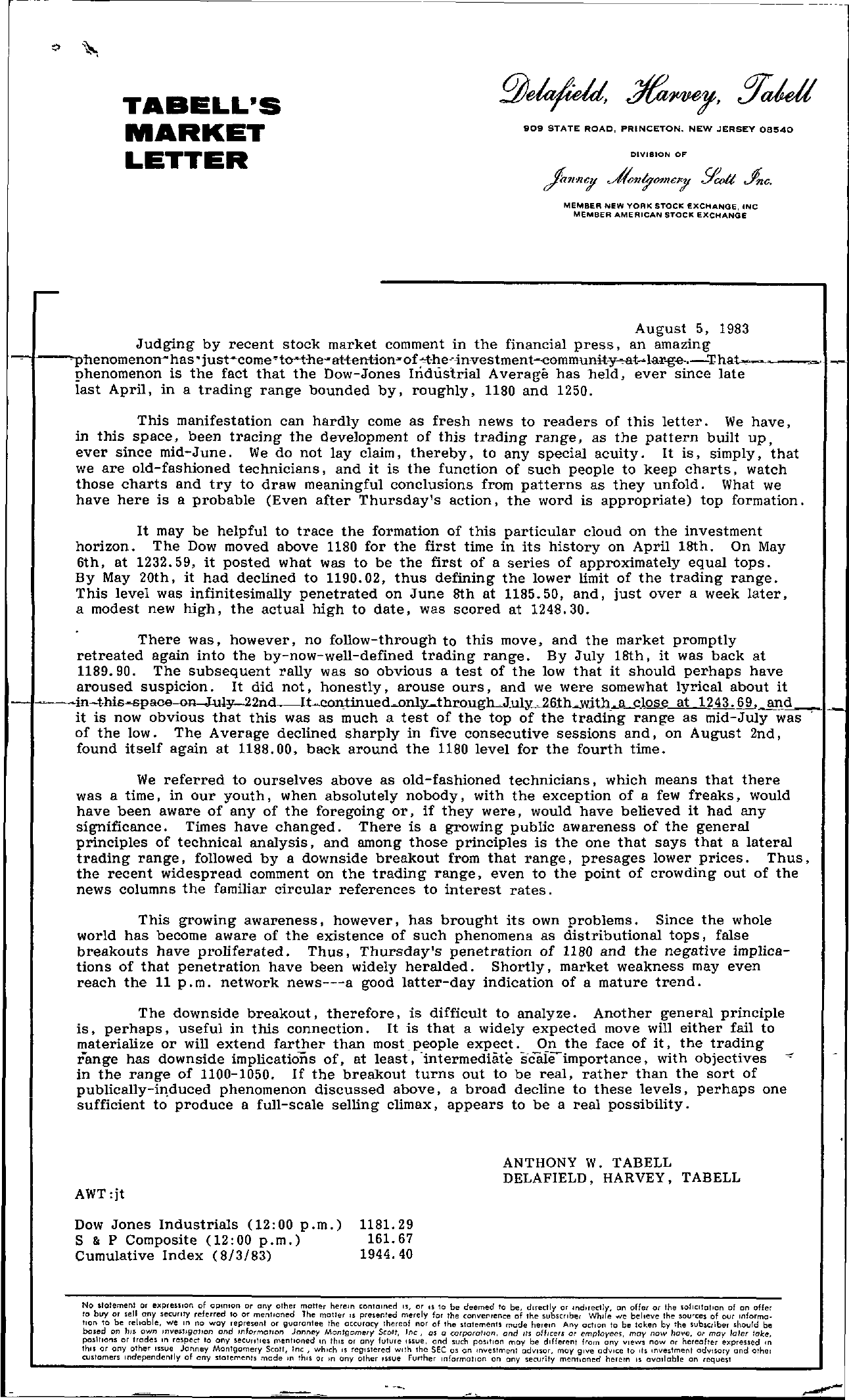 , – – – – – – – – – – – – – – – – – – – – – – – – – – – – – – – – – – – – – – – – – – – – – – – – – — TABELL'S MARKET LETTER 909 STATE ROAD, PRINCETON, NEW JERSEY 08!540 DIVISION OF MEMBER NEW YORK STOCK eXCHANGE, INC MEMBER AMEAICAN STOCK EXCHANGE August 5, 1983 Judging by recent stock market comment in the financial press, an amazing -..,—.phenomenon- has' justcometothe-attentionof –he'-investment-communitY-'llt-la!'-g.e-.-1'hatf phenomenon is the fact that the Dow-Jones Industrial Average has held, ever since late last April, in a trading range bounded by, roughly, 1180 and 1250. This manifestation can hardly come as fresh news to readers of this letter. We have, in this space, been tracing the development of this trading range, as the pattern built up, ever since mid-June. We do not lay claim, thereby, to any special acuity. It is, simply, that we are old-fashioned technicians, and it is the function of such people to keep charts, watch those charts and try to draw meaningful conclusions from patterns as they unfold. What we have here is a probable (Even after Thursday's action, the word is appropriate) top formation. It may be helpful to trace the formation of this particular cloud on the investment horizon. The Dow moved above 1180 for the first time in its history on April 18th. On May 6th, at 1232.59, it posted what was to be the first of a series of approximately equal tops. By May 20th, it had declined to 1190.02, thus defining the lower limit of the trading range. This level was infinitesimally penetrated on June 8th at 1185.50, and, just over a week later, a modest new high, the actual high to date, was scored at 1248. 30. There was, however, no follow-through to this move, and the market promptly retreated again into the by-now-well-defined trading range. By July 18th, it was back at 1189.90. The subsequent rally was so obvious a test of the low that it should perhaps have aroused suspicion. It did not, honestly, arouse ours, and we were somewhat lyrical about it – -in-thiB.-.space-illl–.lul;y-22nd–Itcontinuednlythrough.J.uly 2Bthwjth..lLcJose at 1243. 69 ,!- it is now obvious that this was as much a test of the top of the trading range as mid-July was of the low. The Average declined sharply in five consecutive sessions and, on August 2nd, found itself again at 1188.00, back around the 1180 level for the fourth time. We referred to ourselves above as old-fashioned technicians, which means that there was a time, in our youth, when absolutely nobody, with the exception of a few freaks, would have been aware of any of the foregoing or, if they were, would have believed it had any significance. Times have changed. There is a growing public awareness of the general principles of technical analysis, and among those principles is the one that says that a lateral trading range, followed by a downside breakout from that range, presages lower prices. Thus, the recent widespread comment on the trading range, even to the point of crowding out of the news columns the familiar circular references to interest rates. This growing awareness, however, has brought its own problems. Since the whole world has become aware of the existence of such phenomena as distributional tops, false breakouts have proliferated. Thus, Thursday's penetration of 1180 and the negative implications of that penetration have been widely heralded. Shortly, market weakness may even reach the 11 p. m. network news—a good latter-day indication of a mature trend. The downside breakout, therefore, is difficult to analyze. Another general prinCiple is, perhaps, useful in this connection. It is that a widely expected move will either fail to materialize or will extend farther than most people expect. On the face of it, the trading range has downside implications of, at least, -intermediate scaleimportance , with objectives in the range of 1100-1050. If the breakout turns out to be real, rather than the sort of publically-induced phenomenon discussed above, a broad decline to these levels, perhaps one sufficient to produce a full-scale selling climax, appears to be a real possibility. AWTjt Dow Jones Industrials (12 00 p. m. ) 1181. 29 S & P Composite (1200 p.m.) 161. 67 Cumulative Index (8/3/83) 1944.40 ANTHONY W. TABELL DELAFIELD, HARVEY, TABELL No stotement or exprcnlOn of opinion or any other motter herem contained IS, or I 10 be deemed 10 be, dIrectly or Indirectly, on offer or Ihe 50!1I;llollon of on offer 10 bvy or sell any security referred to or mentIoned The moiler ,s presenled merely for the converlence of the subscriber Whl!e we believe Ihe sou'ces of our information to be reliable, we ,n no way represent or guarantee the accuracy thereof nor of the statements mude nereln Any action to be token by the subscriber should be based on hiS own ,veSl'9otlon and information Janney Monlgomery Scott, Inc, as a corporal lon, and liS offICers or employees, may now have, Of may laler toke, positions or trades In respect to any seCUrities mentioned In thiS or any future Issue, and such position may be different from any views now or hereafter expressed In thl or any other Issue Janney Montgomery Scott, Inc, which IS registered With thc SEC as on Investment adVisor, may give adVice to liS Investment odvlsory ond othel customers Independently of any statements mode In Iha or In any other Issue Further IIlfarmatlon on any security mentioned herein IS available on mquest