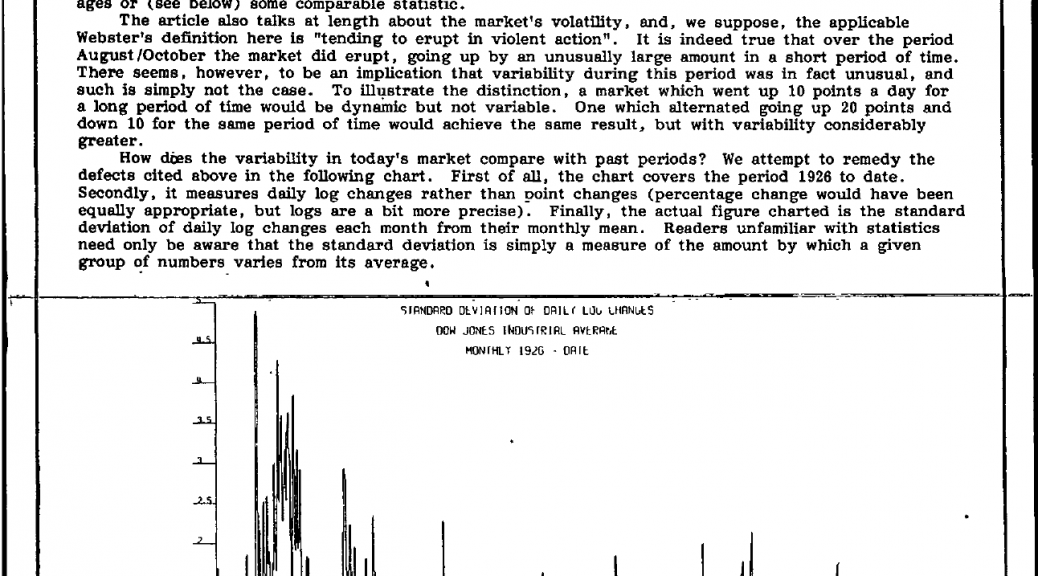 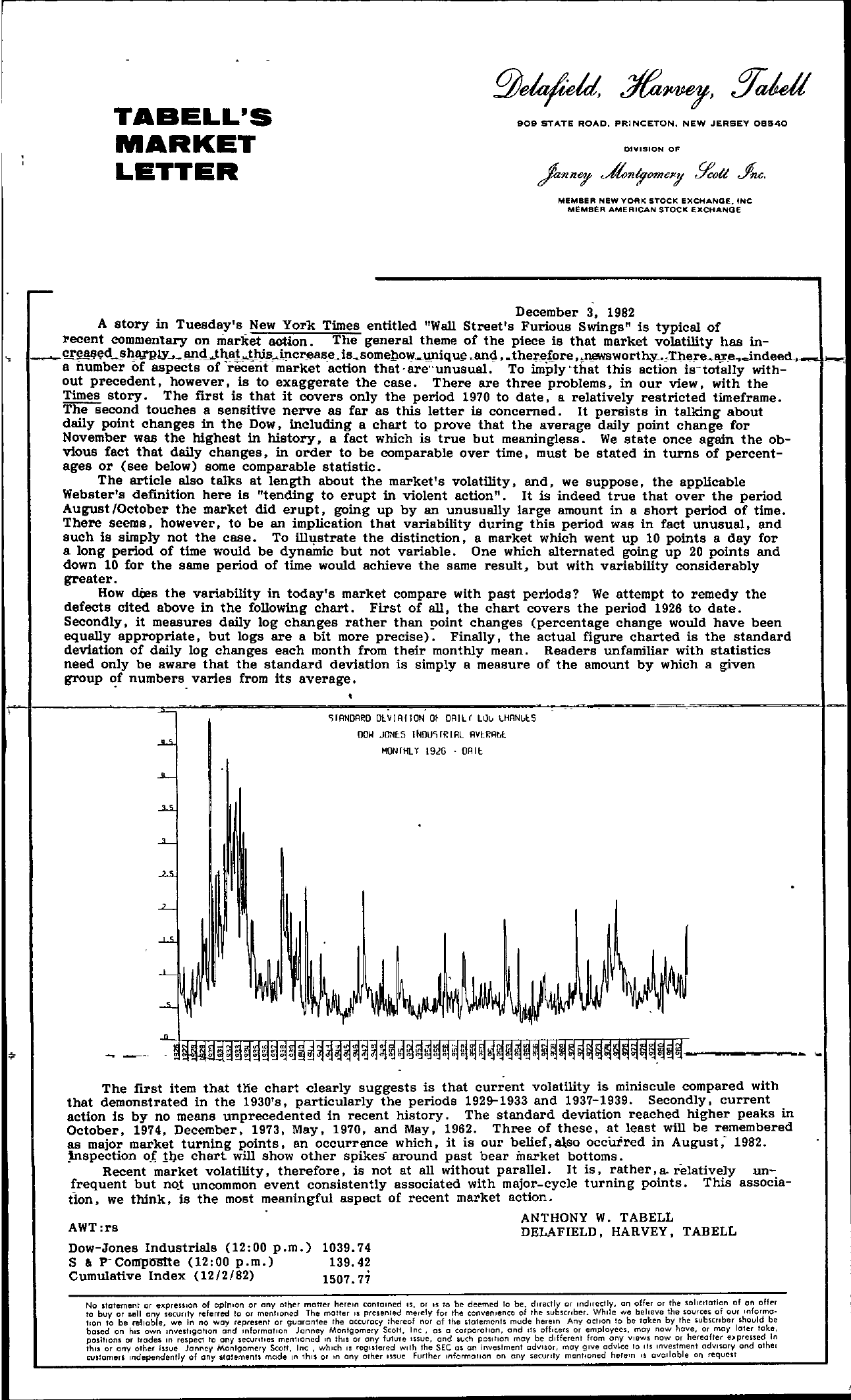 TABELL'S MARKET LETTER 909 STATE ROAD, PRINCETON, NEW JERSEY 08640 OIVISION OF MEMBER NEW YORK STOCK EXCHANGE. tNC MEMBER AMERICAN STOCK EXCHANGE December 3, 1982 A story in Tuesday's New York Times entitled Wall Street's Furious Swings is typical of recent commentary on market aotion. The general theme of the piece is that market volatility haa in- I —an;umberli!;!ac;tio'nthatar;eu!nusual..thTeoreiIfDoprlyei;iii;;,;with-dL1 out precedent, , is to exaggerate the caae. There are three problems, In our view, with the Times story. The first is that it covers only the period 1970 to date, a relatively restricted timeframe. The second touches a sensitive nerve as far aa this letter Is concerned. It persists in talking about daily point changes in the Dow, including a chart to prove that the average daily point change for November waa the highest in history, a fact which is true but meaningless. We state once again the ob- vious fact that daily changes, in order to be comparable over time, must be stated in turns of percent- ages or (see below) some comparable statistic. The article aIao talks at length about the market's volatility, and, we suppose, the applicable Webster's definition here is tending to erupt in violent action. It is indeed true that over the period August/October the market did erupt, going up by an unusually large amount in a short period of time. There seems, however, to be an implication that variability during this period was In fact unusual, and such is simply not the caae. To illstrate the distinction, a market which went up 10 points a day for a long period of time would be dynamic but not variable. One which alternated going up 20 points and down 10 for the same period of time would achieve the same result, but with variability considerably greater. How dOes the variability in today's market compare with paat periods We attempt to remedy the defects cited above in the following chart. First of all, the chart covers the period 1926 to date. Secondly, it meaaures daily log changes rather than point changes (percentage change would have been equally appropriate, but logs are a bit more precise). Finally, the actual figure charted is the standard deviation of daily log changes each month from their monthly mean. Readers unfamiliar with statistics need only be aware that the standard deviation is simply a measure of the amount by which a given group of numbers varies from its average. C;IANDARO Df. …. 1AfION m OAlli lOu UiRNUl.S DOW JONtS IhDU'irRIAL AVtRRM. MQNIHLY 192G . DArt The first item that Ule chart clearly suggests is that current volatility is miniscule compared with that demonstrated In the 1930's, particularly the periods 1929-1933 and 1937-1939. Secondly, current action Is by no means unprecedented in recent history. The standard deviation reached higher peaks in October as maio; m1a9r7k4t December turning 1973 Points May 1970, and May. an dccurrence which, 1962. Three of these. at least will be remembered it is our belief ,also occurred in August,- 1982. ,spection oJ 11)e chart will show other spikes around past bear market bottoms. Recent market volatility. therefore. is not at all without parallel. It is. rather. a. relatively un- frequent but nQt uncommon event consistently associated with major-cycle turning points. This associa- tlon, we think. is the most meaningful aspect of recent market action. AWTrs Dow-Jones Industrials (1200 p.m.) S A P'CompOl!lte (1200 p.m.) Cumulative Index (12/2/82) 1039.74 139.42 1507.77 ANTHONY W. TABELL DELAFIELD. HARVEY. TAB ELL No statement or expression of opinion or ony other mafter herem contolned IS, or IS to be deemed to be, directly or indirectly, on offer or Ihe soliCitation of on offer to buy sell anr. security referred to or mentIoned The motter IS presented merely for the convenience of Ihe ubscrlber. While we believe the sources of our Informa- tion to relloh e, we In no way represent or guarantee the occurocy thereof nor of Ihe statements mude herem Any action to be token by the subSCriber shol,lld be bosed I own inVestigatIOn and mformatlon Janney Montgomery Scali, Inc, 0 ( corporation, and lIS officers or employees, may now hove, or moy later loke, In respect to any securities mentioned In thiS or ony future Issue, and such position may be different from any views now or hereafter e)preed In Janney Montgomery Scott, Inc, which IS rcgl5tered With the SEC as on Investment adVisor, may give advice to lis Investment adVisor.., and othel J of any stalement5 made In thiS or m an.., other ISsue Further Information on any seoJflty mentioned herem IS available on request