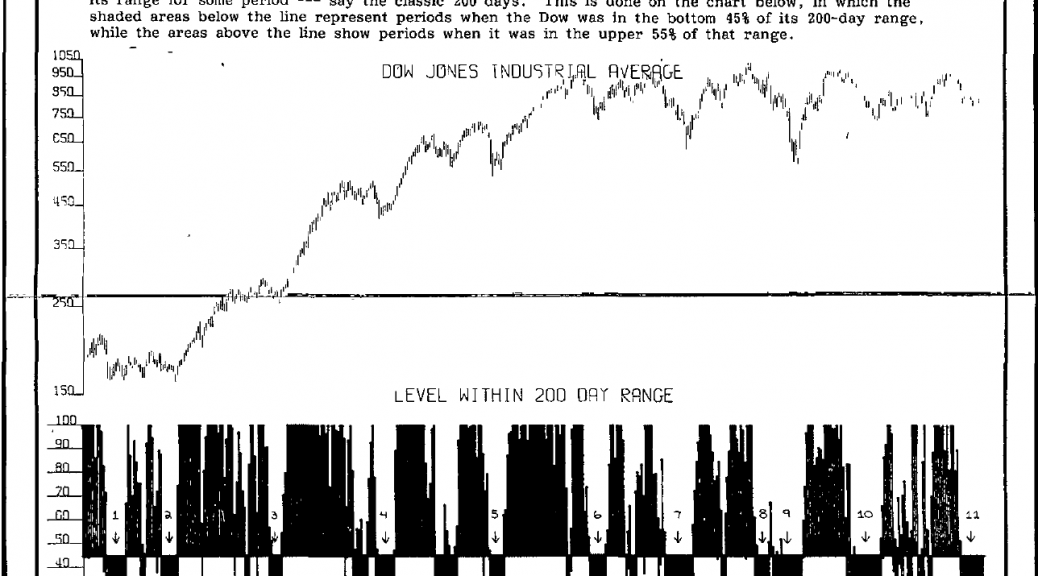 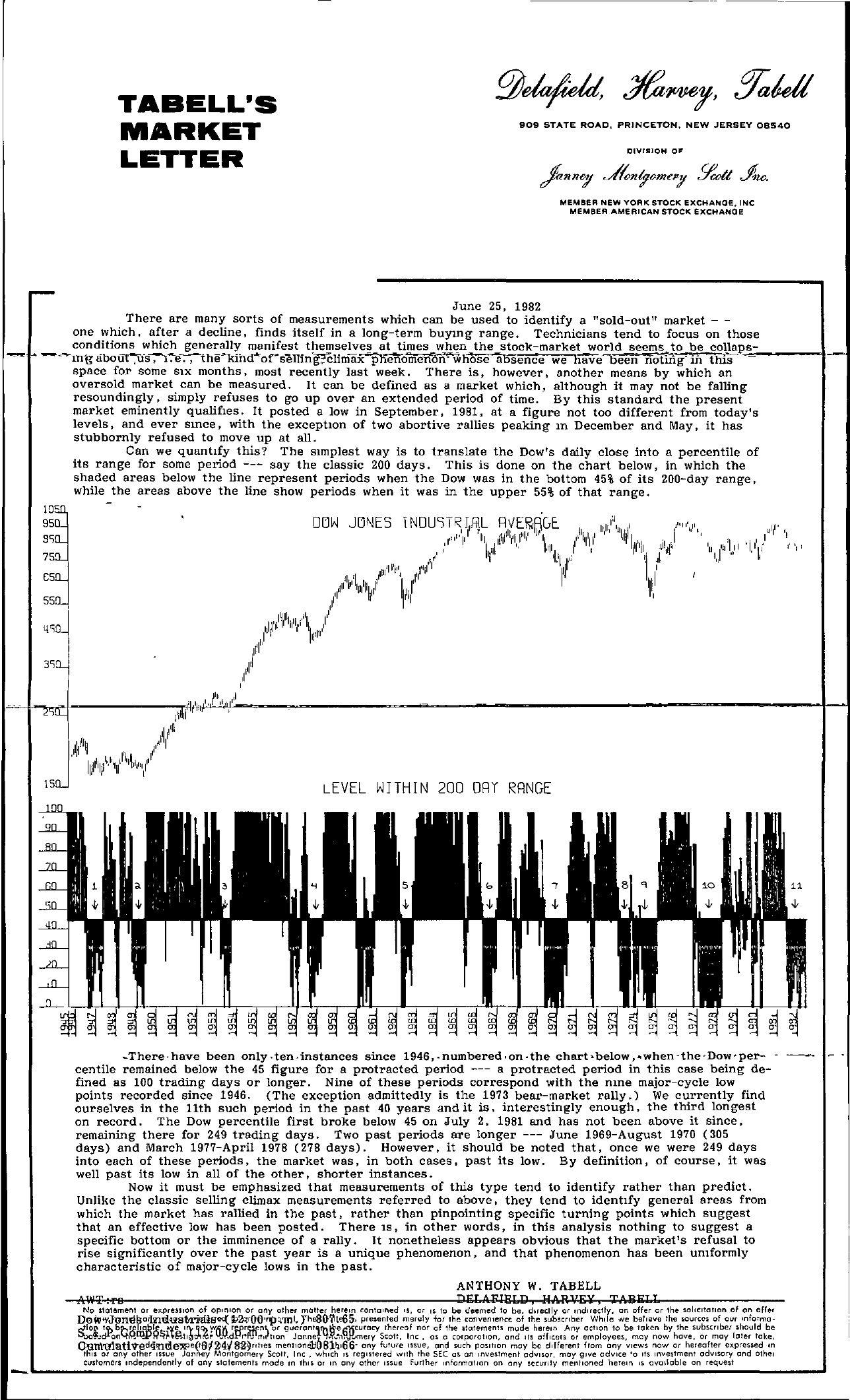 TABELL'S MARKET LETTER 909 STATE ROAD, PRINCETON, NEW JERSEY 08540 DIVISION OF MEMBER NEW VORK STOCK EXCHANQE, INC MEMBER AMERICAN STOCK EXCHANQE -4 – June 25. 1982 There are many sorts of measurements which can be used to identify a sold-outll market – – one which. after a decline. finds itself in a long-term buymg range. Technicians tend to focus on those conditions which generally manifest themselves at times when the stock-market world seems to be ……..lng-abOii't-;'lis7't7-e.-.-theltihd..,ofsellinificlimaxpnenomenon- wliose aBsence we haveoeen n-otirtg'lh tclollliaSps-'—–I–t space for some SlX months, most recently last week. There is. however, another means by which an oversold market can be measured. It can be defined as a market which, although it may not be falling resoundingly. simply refuses to go up over an extended period of time. By this standard the present market eminently qualifIes. It posted a low in September, 1981, at a figure not too different from today's levels. and ever smce. with the exceptIon of two abortive rallies peaking m December and May. it has stubbornly refused to move up at all. Can we quantIfy this The sImplest way is to translate the Dow's daily close into a percentile of its range for some period — say the classic 200 days. This is done on the chart below. in which the shaded areas below the line represent periods when the Dow was in the bottom 45 of its 200-day range, while the areas above the line show periods when it was in the upper 55 of that range. 15 LEVEL WITHIN 200 DRY RRNGE There' have been only, ten instances since 1946. numbered, on the chart -below …. when the Dow' per- . centile remained below the 45 figure for a protracted period — a protracted period in this case being defined as 100 trading days or longer. Nine of these periods correspond with the nme major-cycle low points recorded since 1946. (The exception admittedly is the 1973 bear-market rally.) We currently find ourselves in the 11th such period in the past 40 years and it is, interestingly enough, the third longest on record. The Dow percentile first broke below 45 on July 2. 1981 and has not been above it since. remaining there for 249 trading days. Two past periods are longer — June 1969-August 1970 (305 days) and March 1977-April 1978 (278 days). However. it should be noted that. once we were 249 days into each of these periods, the market was. in both cases. past its low. By definition, of course. it was well past its low in all of the other, shorter instances. Now it must be emphasized that measurements of this type tend to identify rather than predict. Unlike the classic selling climax measurements referred to above, they tend to identIfy general areas from which the market has rallied in the past, rather than pinpointing specific turning points which suggest that an effective low has been posted. There IS. in other words. in this analysis nothing to suggest a specific bottom or the imminence of a rally. It nonetheless appears obvious that the market's refusal to rise significantly over the past year is a unique phenomenon. and that phenomenon has been umformly characteristic of major-cycle lows in the past. ANTHONY W. TABELL AW'I' .P. Dill. AFE'oI,….j;TA.iIlI.lIl'I.;JI.——– No slalement or ex.preulon of opinion or ony other mailer herem conillned IS, or IS to be deemed to be, dlreclly or indirectly, on offer or the solicltollon of on offer DoWVJuneBorI\11d.U'Btrrratgec(t;OO'rp.'mt. yhe80te65, presented merely for the conven,enc of Ihe subscriber Whde -He believe Ihe wurces of our Informa- sioIOa!' dtr9o.nb\p..H,t,.!lLnwM!',t\oegtlIn,dqlQlO)wUniJ'l,.I',rdl-r'rfelJn'rtT.ltolornguJoornannte't'.1i'',,6,',inJ'c..IumrearcyySCthaelir,eoIfn nor c, of 0 the statements 0 corporation, m..,de and Its herein Any officers or action to be laken by the subSCrIber should be employees, may now have, or may later lake, OUtt\ulativedqsnlfeJe(ta124v8gfllles menTlonEill 811l166- any future Issue, and such position may be different from any views now or hereafter ex.pressed In L-cttuilsltoomr earsnyInodlehpeernIdsesunetlyJoanf noenyy MstoantelgmoemnetsrymSacdoett,InInthciS, wortllcmh aISnyreogtihseterreISdsuWe ithFutrhteheSrECinfaosrmaantIOInnveosntmaennyt asdeVciusrolrl,ymmaeynlgliovnecdadhVeirceein'aISItsavInavIleasbtmleenotnadrVeqisuoeryt and othel