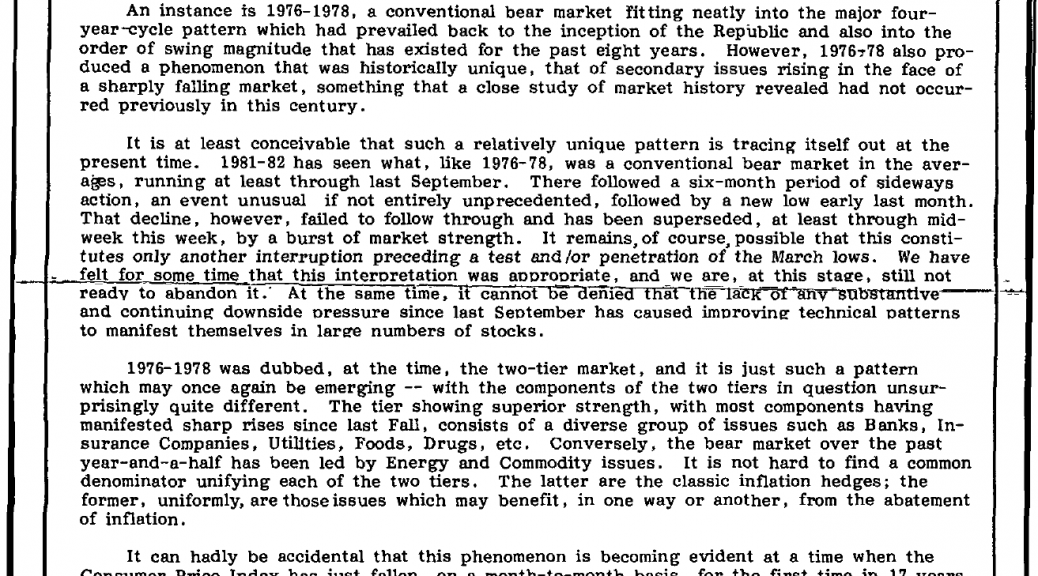 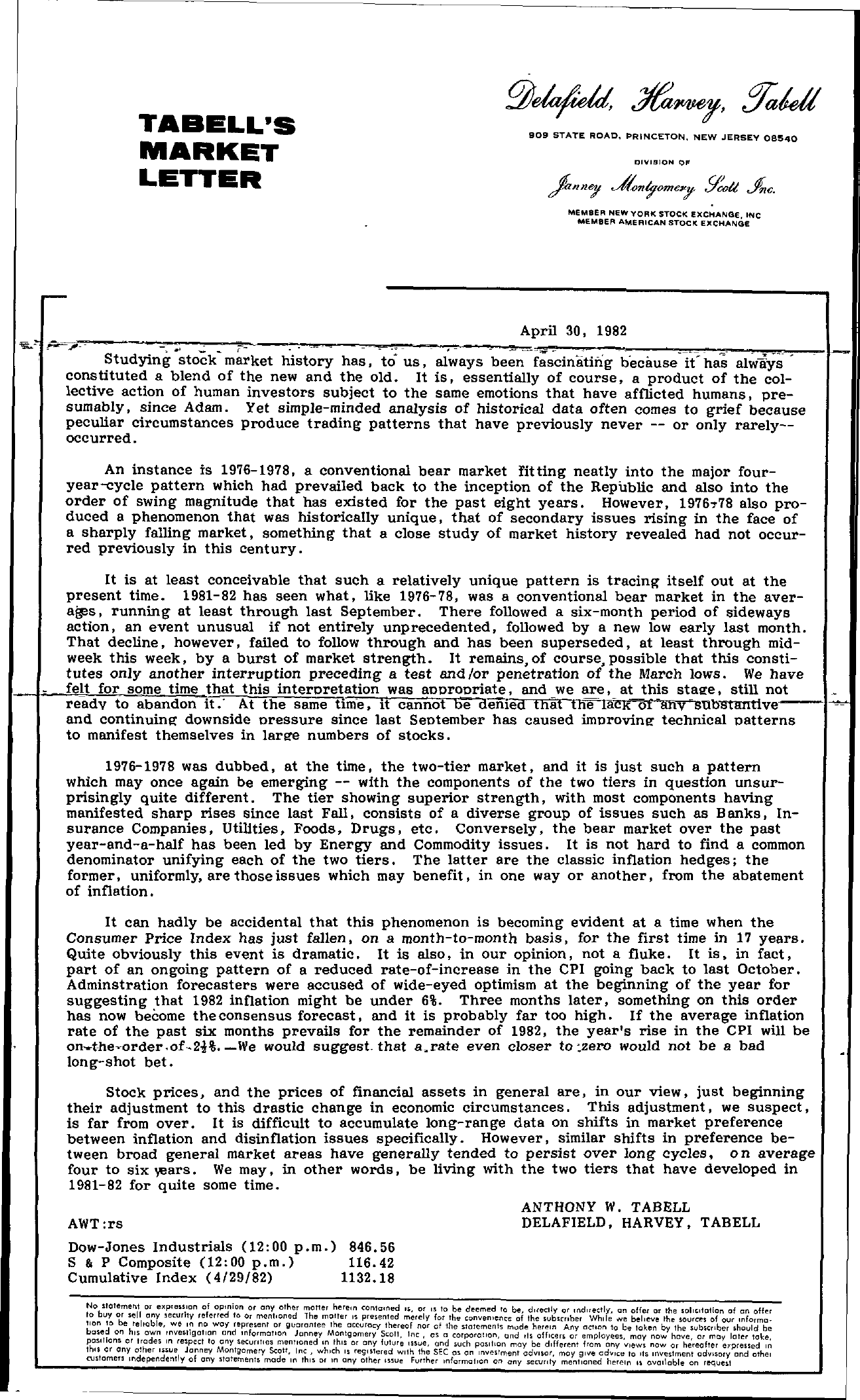 TABELL'S MARKET LETTER 909 STATE ROAD, PRINCETON, NEW JERSEY 08540 DIVISION OF MEMBER NEW YORK STOCK eXCHANGe, INC MEMBER AMERICAN STOCK EXCHANGE – April 30. 1982 ,,- ,.— – StUYl-'-ng'-t-o-c–k–m;';–k-e-t-his't'ory–h-a-s-.,-t-o'-u-s-.-a-iw,.,–a-y-s….b..-.e..;''n-.f;'s..,,c-i-n-iiti-ng-b-e-c-a-u-s-e…it-h-a.s,…–al-w–Ii'ys-''''''''''''' constituted a blend of the new and the old. It is. essentially of course. a product of the collective action of human investors subject to the same emotions that have afflicted humans. presumably. since Adam. Yet simple-minded analysis of historical data often comes to grief because peculiar circumstances produce trading patterns that have previously never — or only rarely-occurred. An instance is 1976-1978. a conventional bear market fitting neatly into the major fouryear-cycle pattern which had prevailed back to the inception of the Republic and also into the order of swing magnitude that has existed for the past eight years. However. 1976,,78 also produced a phenomenon that was historically unique. that of secondary issues rising in the face of a sharply falling market. something that a close study of market history revealed had not occurred previously in this century. It is at least conceivable that such a relatively unique pattern is tracing itself out at the present time. 1981-82 has seen what. like 1976-78. was a conventional bear market in the aver- as. running at least through last September. There fOllowed a six-month period of sideways action. an event unusual if not entirely unprecedented. followed by a new low early last month. That decline. however. failed to follow through and has been superseded. at least through mid- week this week. by a burst of market strength. It remains. of course. possible that this consti- tutes only another interruption preceding a test and lor penetration of the March lows. We have felt for some time that this interpretation was appropriate. and we are. at this stage. still not readv to abandon it At the same tim-e. it cannot tie denied that the lack ofMysubStlmtive—I and continuing downside pressure since last September has caused improving technical patterns to manifest themselves in large numbers of stocks. 1976-1978 was dubbed. at the time. the two-tier market. and it is just such a pattern which may once again be emerging — with the components of the two tiers in question unsurprisingly quite different. The tier showing superior strength. with most components having manifested sharp rises since last Fall. consists of a diverse group of issues such as Banks. Insurance Companies. Utilities. Foods. Drugs. etc. Conversely. the bear market over the past year-and-a-half has been led by Energy and Commodity issues. It is not hard to find a common denominator unifying each of the two tiers. The latter are the classic inflation hedges; the former. uniformly. are those issues which may benefit. in one way or another. from the abatement of inflation. It can hadly be accidental that this phenomenon is becoming evident at a time when the Consumer Price Index has just fallen. on a month-to-month basis. for the first time in 17 years. Quite obviously this event is dramatic. It is also. in our opinion. not a fluke. It is. in fact. part of an ongoing pattern of a reduced rate-of-increase in the CPI going back to last October. Adminstration forecasters were accused of wide-eyed optimism at the beginning of the year for suggesting thst 1982 inflation might be under 6. Three months later. something on this order has now become the conSensus forecast. and it is probably far too high. If the average inflation rate of the past six months prevails for the remainder of 1982. the year's rise in the CPI will be ont-heorder.of-2t. -We would suggest that a.rate even closer to zero would not be a bad long-shot bet. Stock prices. and the prices of financial assets in general are. in our view. just beginning their adjustment to this drastic change in economic circumstances. This adjustment. we suspect. is far from over. It is difficult to accumulate long-range data on shifts in market preference between inflation and disinflation issues specifically. However. similar shifts in preference between broad general market areas have generally tended to persist over long cycles, 0 n average four to six .,ears. We may. in other words. be living with the two tiers that have developed in 1981-82 for quite some time. AWT rs ANTHONY W. TABELL DELAFIELD. HARVEY. TAB ELL Dow-Jones Industrials (12 00 p. m.) 846.56 S 8. P Composite (1200 p.m.) 116.42 Cumulative Index (4/29/82) 1132.18 No slalemel'lt to buy or sell or expreUlon of opmion Of any other any seurhy referred Ie. Or ment,oned motter herein The motter IS contol1led pre5ented IS, or IS to be merely for the deemed 10 be, convenience of tdhierec5tulbyconrbeInrdirWechtillye, an we offer or believe the SOll;llotlon of the sources of our an offer Informo- lion to be reliable, we In no way repre5enr or guarantee the accurocy thereof nor of the statements mude herein Any o;llOn to be token by the sub5cnber should be based on hiS own Investigation and mformallon Janney Montgomery ScolI, Inc, os 0 corporation, and Its officers or employees, may now have, or may later lake, posrllons or trades In reSpect to ony secUfltl(lS mentioned In thl or any future Issue, and such positron may be different from any Views now or hereafter erpressed In thl or any other Issue Janney Montgomery Scott, Inc, which IS registered With the SEC as on Investment adVisor, may give adVice to ItS mV(!stment adVisory and olhel aJstomen Il'Idependently af any statements mode In thiS or m any other ISSue Further Information on any serurrty mentioned herein Il available on request