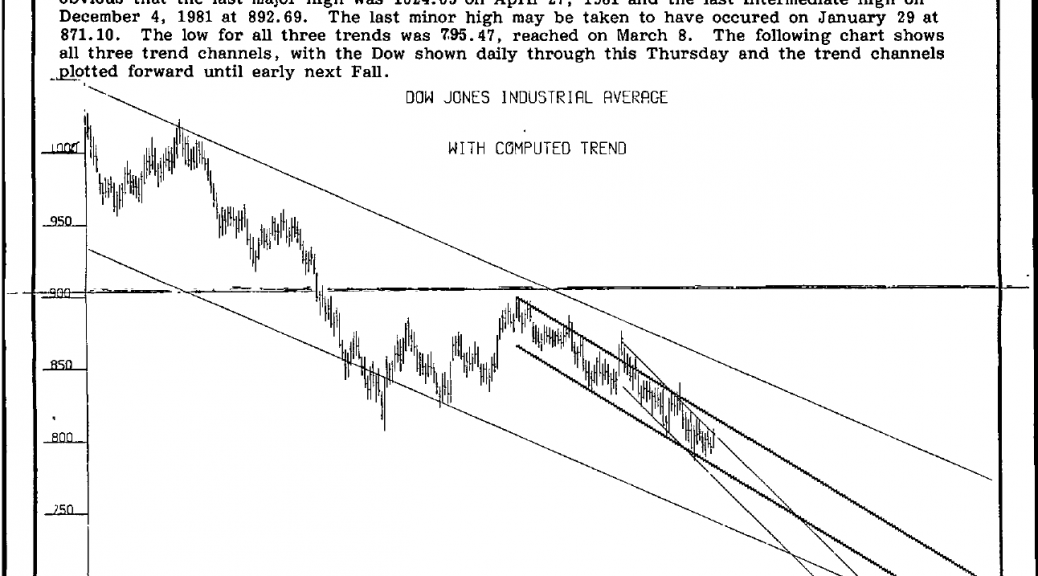 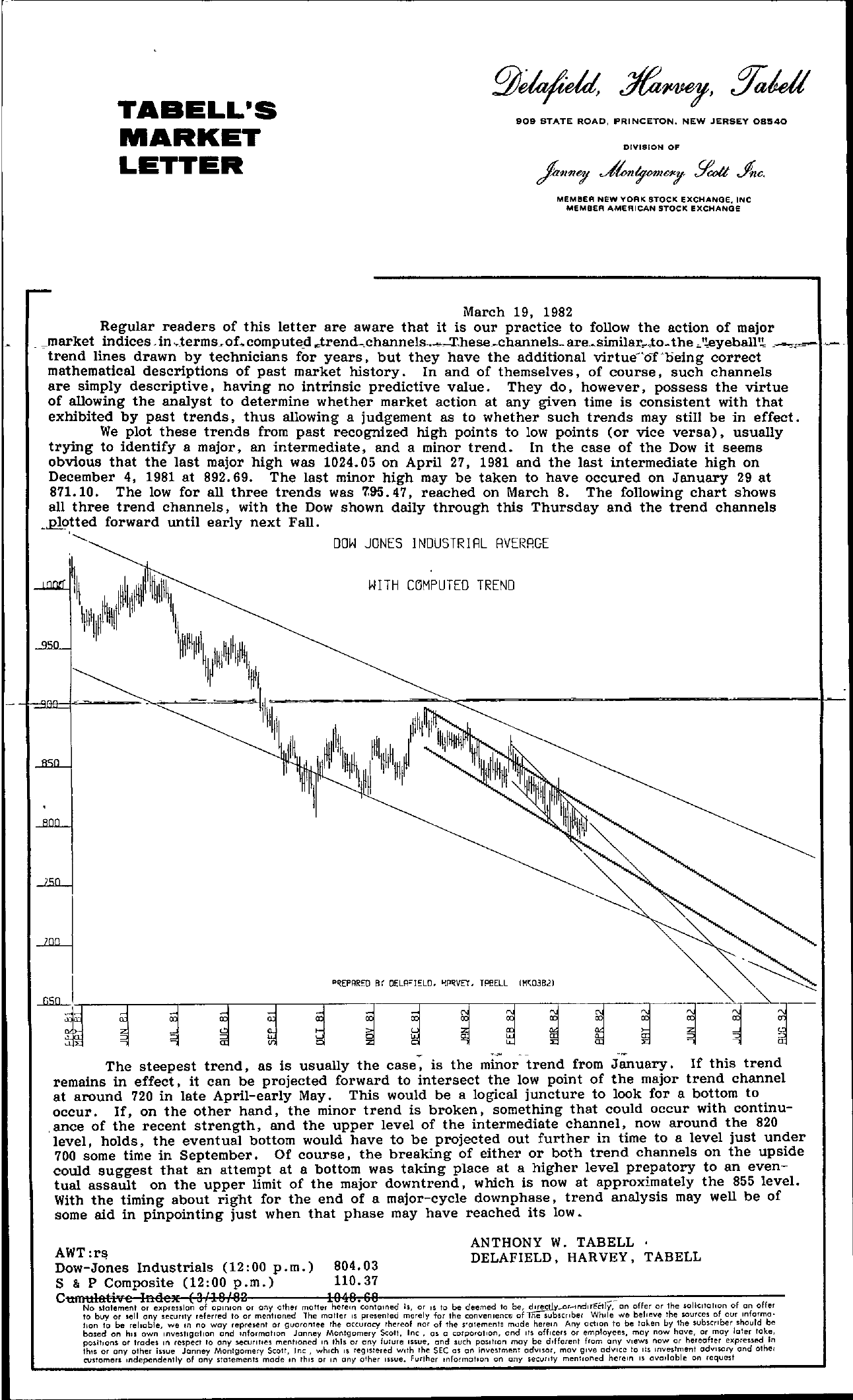 TABELL'S MARKET LETTER 909 STATE ROAD, PRINCETON. NEW JERSEY 08540 DIVISION OF MEMBER NEW VORK STOCK EXCHANoe, INC MEMBER AMERICAN STOCK EXCHANGE March 19, 1982 Regular readers of this letter are aware that it is our practice to follow the action of major market indices, in .terms.of.computed trend-channels.hesechannels aresimilarto the '!,eyeball -.,. trend lines drawn by technicians for years, but they have the additional virtue'of-being correct mathematical descriptions of past market history. In and of themselves, of course, such channels are simply descriptive, having no intrinsic predictive value. They do, however, possess the virtue of allowing the analyst to determine whether market action at any given time is consistent with that exhibited by past trends, thus allowing a judgement as to whether such trends may still be in effect. We plot these trends from past recognized high points to low points (or vice versa), usually trying to identify a major, an intermediate, and a minor trend. In the case of the Dow it seems obvious that the last major high was 1024.05 on April 27, 1981 and the last intermediate high on December 4, 1981 at 892.69. The last minor high may be taken to have occured on January 29 at 871.10. The low for all three trends was 795.47, reached on March 8. The following chart shows all three trend channels, with the Dow shown daily through this Thursday and the trend channels ..2!otted forward until early next Fall. DOW JONES INDUSTRIRL RVERRGE WITH COMPUTED TREND IRRED B( OELRI!LD, I-!P'!VE'!', TfI!!ElL The steepest trend, as is usually the case, is the minor trend from January. If this trend remains in effect, it can be projected forward to intersect the low point of the major trend channel at around 720 in late April-early May. This would be a logical juncture to look for a bottom to occur. If, on the other hand, the minor trend is broken, something that could occur with continu,ance of the recent strength, and the upper level of the intermediate channel, now around the 820 level, holds, the eventual bottom would have to be projected out further in time to a level just under 700 some time in September. Of course, the breaking of either or both trend channels on the upside could suggest that an attempt at a bottom was taking place at a higher level prepatory to an eventual assault on the upper limit of the major downtrend, which is now at approximately the 855 level. With the timing about right for the end of a major-cycle downphase, trend analysis may well be of some aid in pinpointing just when that phase may have reached its low. AWTr Dow-Jones Industrials (1200 p.m.) 804.03 ANTHONY W. TABELL DELAFIELD, HARVEY, TABELL S & P Composite (1200 p.m.) 110.37 CttfIltHate illi'lex (a 118182 1948.68 . No !.totement or exprenlon of Opinion or ony other matter herem contamed Is, or 1510 be deemed to be, dlrectlycr-indlreCtly, on offer or the solicltotlon of on offer to buy or sell ony se,urlly referred to or menhoned The motter 1 presented merely for the convenient! of tneSubscr,ber WhIle -He belIeve the Ources of our Informa hon to be reliable, we In no way represent or guarantee the accuracy thereof nor of the s'otements mude herein Any action to be tolen by the subscriber should be based on hIS own Investigation and Information Janney Montgomery Scoll, Inc, as a corporation, and Its officers or employees, moy now have, or may later take, positions or trades In respect to any secUflhes mentioned In this or any future !ssue, and such posillon moy be d,fferent from any views now or hereafter expreued In thiS or any other issue Janney Montgomery Scoll, Inc, whICh IS registered wilh the SEC as on Investment adVisor, mav give advlCc to Its Investment adVISOry and othel customers Independently of any statements mode In thiS or In ony other Issue. further ,nformatlon on any secuflly mentioned herCln IS avaIlable on request