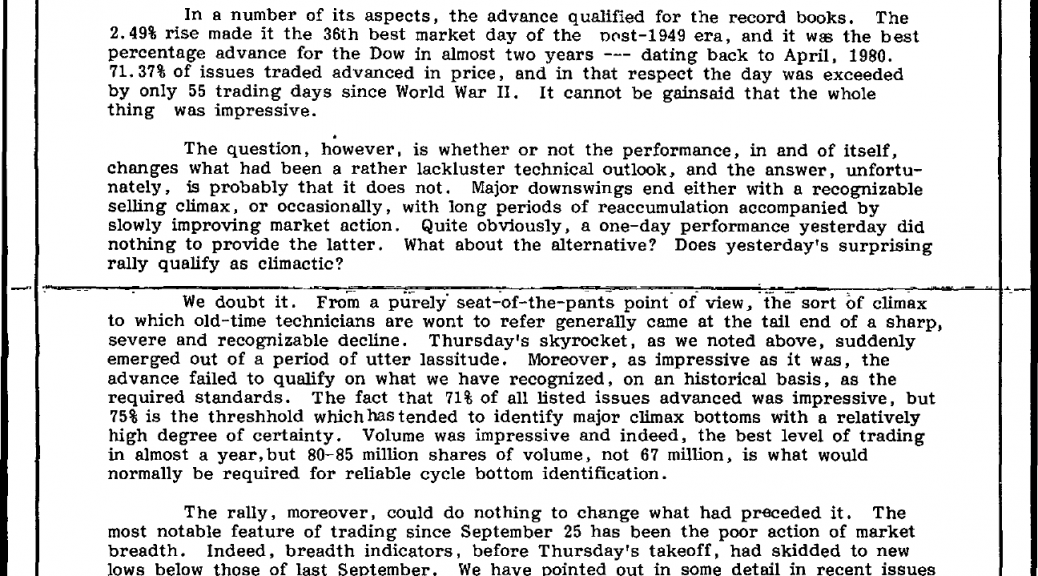 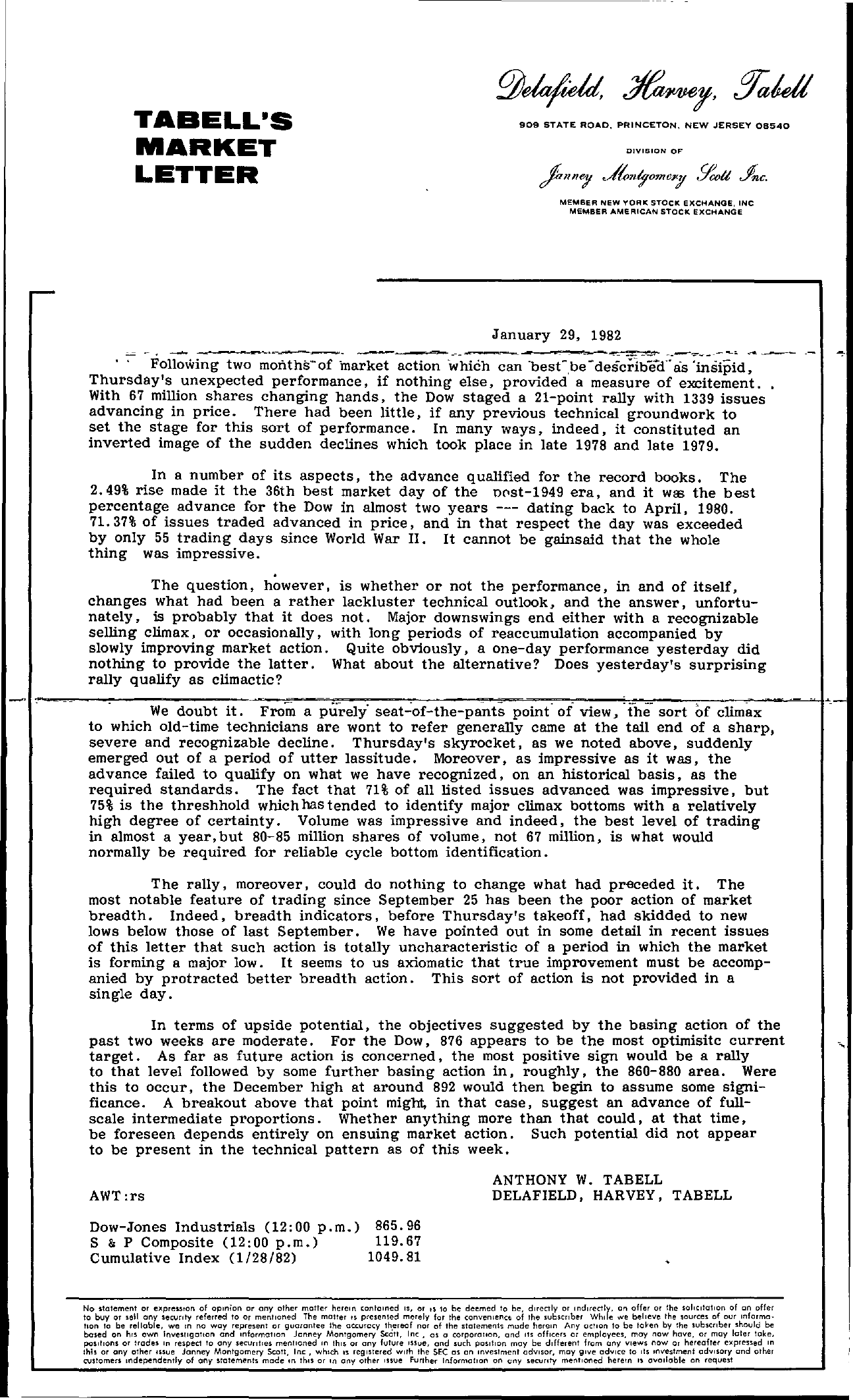 TABELL'S MARKET LETTER 909 STATE ROAD, PRINCETON. NEW JERSEY 08540 DIYISION OF MEMBER NEW YORK STOCK eXCHANGE, INC MEMBER AMERICAN STOCI( EXCHANGE January 29, 1982 – …..- – – – I — — …….. Following two moilths'of market action which can 'best-,be-described as 'insipid, Thursday's unexpected performance, if nothing else, provided a measure of excitement. . With 67 million shares changing hands, the Dow staged a 21-point rally with 1339 issues advancing in price. There had been little, if any previous technical groundwork to set the stage for this sort of performance. In many ways, indeed, it constituted an inverted image of the sudden declines which took place in late 1978 and late 1979. In a number of its aspects, the advance qualified for the record books. The 2.49 rise made it the 36th best market day of the p'st-1949 era, and it W!B the best percentage advance for the Dow in almost two years — dating back to April, 1980. 71. 37 of issues traded advanced in price, and in that respect the day was exceeded by only 55 trading days since World War II. It cannot be gainsaid that the whole thing was impressive. The question, however, is whether or not the performance, in and of itself, changes what had been a rather lackluster technical outlook, and the answer, unfortunately, is probably that it does not. Major downswings end either with a recognizable selling climax, or occasionally, with long periods of reaccumulation accompanied by slowly improving market action. Quite obviously, a one-day performance yesterday did nothing to provide the latter. What about the alternative Does yesterday's surprising rally qualify as climactic . —————-' We doubt it. From a purely' seatof-the-pants point' of view the sort of climax to which old-time technicians are wont to refer generally came at the tail end of a sharp, severe and recognizable decline. Thursday's skyrocket, as we noted above, suddenly emerged out of a period of utter lassitude. Moreover, as impressive as it was, the advance failed to qualify on what we have recognized, on an historical basis, as the required standards. The fact that 71 of all listed issues advanced was impressive, but 75 is the threshhold which has tended to identify major climax bottoms with a relatively high degree of certainty. Volume was impressive and indeed, the best level of trading in almost a year, but 80-85 million shares of volume, not 67 million, is what would normally be required for reliable cycle bottom identification. The rally, moreover, could do nothing to change what had preceded it. The most notable feature of trading since September 25 has been the poor action of market breadth. Indeed, breadth indicators, before Thursday's takeoff, had skidded to new lows below those of last September. We have pointed out in some detail in recent issues of this letter that such action is totally uncharacteristic of a period in which the market is forming a major low. It seems to us axiomatic that true improvement must be accompanied by protracted better breadth action. This sort of action is not provided in a single day. In terms of upside potential, the objectives suggested by the basing action of the past two weeks are moderate. For the Dow, 876 appears to be the most optimisitc current target. As far as future action is concerned, the most positive sign would be a rally to that level followed by some further basing action in, roughly, the 860-880 area. Were this to occur, the December high at around 892 would then begin to assume some significance. A breakout above that point might, in that case, suggest an advance of fullscale intermediate proportions. Whether anything more than that could, at that time, be foreseen depends entirely on ensuing market action. Such potential did not appear to be present in the technical pattern as of this week. AWT rs ANTHONY W. TABELL DELAFIELD, HARVEY, TAB ELL Dow-Jones Industrials (1200 p.m.) 865.96 S & P Composite 0200 p.m.) 119.67 Cumulative Index (/28/82) 1049.81 , No statement or expression of opinion or any other matter herein contained I, or IS 10 be deemed 10 be, directly or indirectly, on offer or Ihe SOllCIlolion of on offer to buy Of lell ony secunty referred to or mentioned The maHer 1 presented merely for the convemenCE of the subscriber Whde -Ne believe the sources of our Informolion 10 be reliable, we In no way represenl or guaranlee the ocuracy Iherecf nor of Ihe statements mude herein Any oCllon 10 be toen by the subscriber should be based on hiS own lnvestlgatton and Information Janney Montgomery Scali. Inc. os a corporalron, and Its officers or employees, moy now have. or may later take, positions or trades In respect to any securilles mentioned In thiS or any future Issue, and such position may be different from ony views now or hereafter expressed In this or ony other uSue Janney Montgomery Seoll, tnc, which IS registered With the SEC as on Investment adVisor, may give adVice 10 lIs Investment adVISOry and otner customers Independently of ony statements mode In thiS or In any other luue Further tnformahon on ony secursty mentioned herern avo liable on request