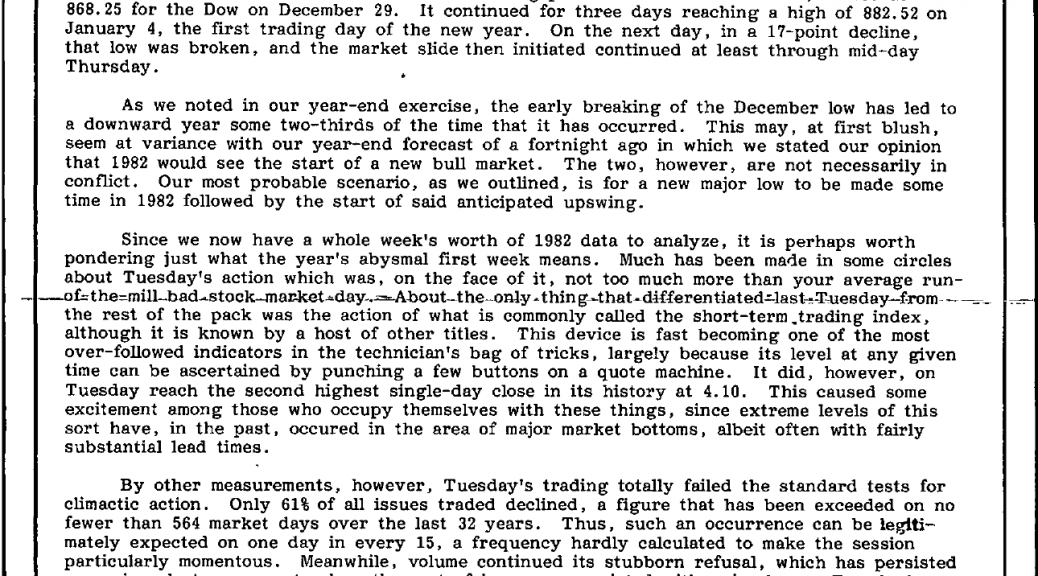 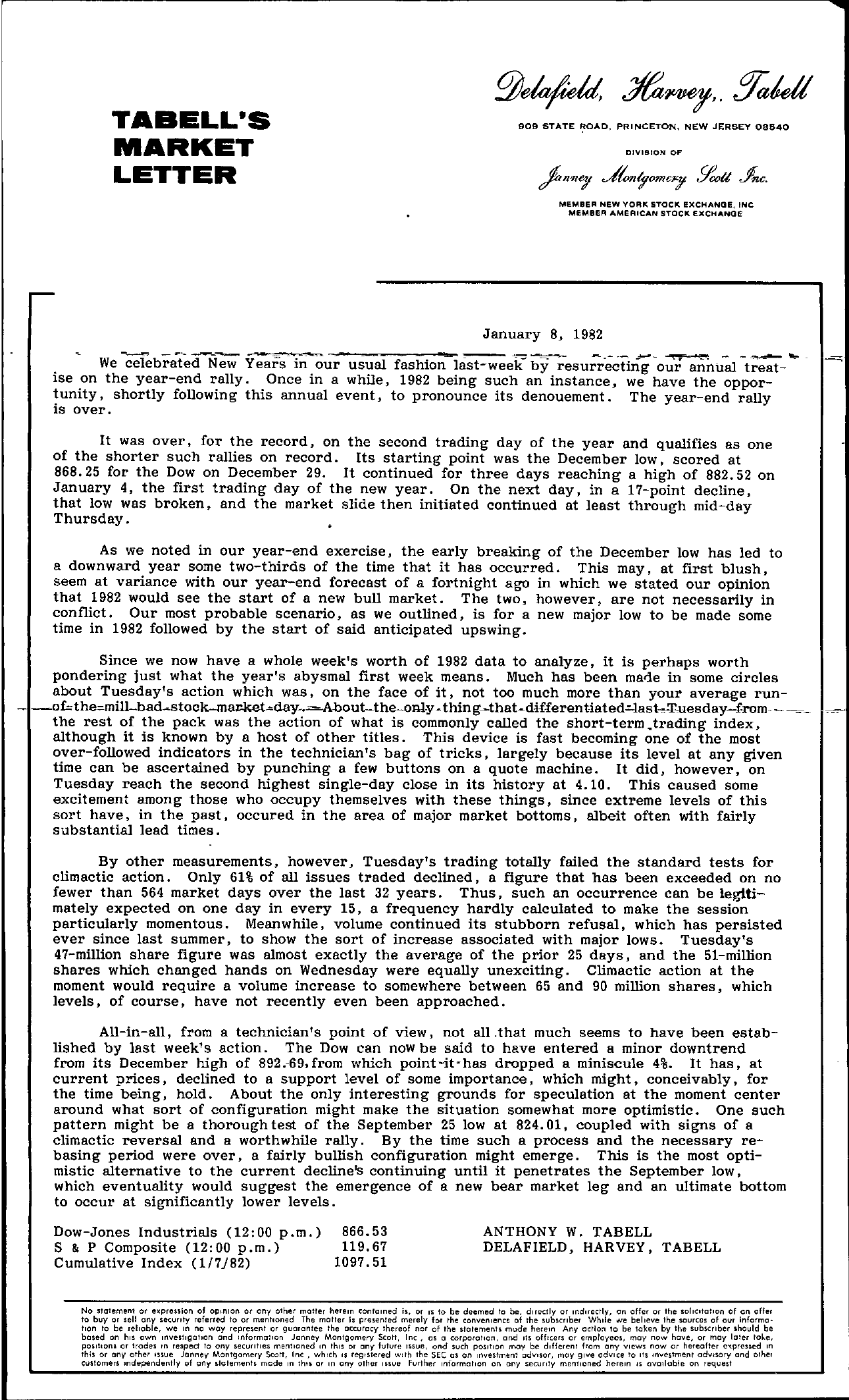 TABELL'S MARKET LETTER 909 STATE 'lOAD, PRINCETON, NEW JERSEY 08540 DIVISION OF MEMBER NEW YORK STOCK EXCHANGE, tNC MEMBER AMERICAN STOCK EXCHANOE January 8, 1982 We -br-edN ew Years in our usual fashion last-week- by resurrecthlg our nu -t;';;t- …. ise on the year-end rally. Once in a while, 1982 being such an instance, we have the opportunity, shortly following this annual event, to pronounce its denouement. The year-end rally is over. It was over, for the record, on the second trading day of the year and qualifies as one of the shorter such rallies on record. Its starting point was the December low, scored at 868.25 for the Dow on December 29. It continued for three days reaching a high of 882.52 on January 4, the first trading day of the new year. On the next day, in a 17-point decline, that low was broken, and the market slide then initiated continued at least through mid-day Thursday. As we noted in our year-end exercise, the early breaking of the December low has led to a downward year some two-thirds of the time that it has occurred. This may, at first blush, seem at variance with our year-end forecast of a fortnight ago in which we stated our opinion that 1982 would see the start of a new bull market. The two, however, are not necessarily in conflict. Our most probable scenario, as we outlined, is for a new major low to be made some time in 1982 followed by the start of said anticipated upswing. Since we now have a whole week's worth of 1982 data to analyze, it is perhaps worth pondering just what the year's abysmal first week means. Much has been made in some circles about Tuesday's action which was, on the face of it, not too much more than your average run- -0fthemill-badstock-mal'ketday-.Aboutthe01l1y.thingAhat.differentiated..lastTue8day-f.rom– the rest of the pack was the action of what is commonly called the short-term .trading index, although it is known by a host of other titles. This device is fast becoming one of the most over-followed indicators in the technician's bag of tricks, largely because its level at any given time can be ascertained by punching a few buttons on a quote machine. It did, however, on Tuesday reach the second highest single-day close in its history at 4.10. This caused some excitement among those who occupy themselves with these things, since extreme levels of this sort have, in the past, occured in the area of major market bottoms, albeit often with fairly substantial lead times. By other measurements, however, Tuesday's trading totally failed the standard tests for climactic action. Only 61 of all issues traded declined, a figure that has been exceeded on no fewer than 564 market days over the last 32 years. Thus, such an occurrence can be legitimately expected on one day in every 15, a frequency hardly calculated to make the session particularly momentous. Meanwhile, volume continued its stubborn refusal, which has persisted ever since last summer, to show the sort of increase associated with major lows. Tuesday's 47-million share figure was almost exactly the average of the prior 25 days, and the 51-million shares which changed hands on Wednesday were equally unexciting. Climactic action at the moment would require a volume increase to somewhere between 65 and 90 million shares, which levels, of course, have not recently even been approached. All-in-all, from a technician's point of view, not all ,that much seems to have been estab- lished by last week's action. The Dow can now be said to have entered a minor downtrend from its December high of 892.-69.from which point-it-has dropped a miniscule 4. It has, at current prices, declined to a support level of some importance, which might, conceivably, for the time being, hold. About the only interesting grounds for speculation at the moment center around what sort of configuration might make the situation somewhat more optimistic. One such pattern might be a thorough test of the September 25 low at 824.01, coupled with signs of a climactic reversal and a worthwhile rally. By the time such a process and the necessary rebasing period were over, a fairly bullish configuration might emerge. This is the most opti- mistic alternative to the current decline'S continuing until it penetrates the September low, which eventuality would suggest the emergence of a new bear market leg and an ultimate bottom to occur at significantly lower levels. Dow-Jones Industrials (1200 p.m.) 866.53 S & P Composite (1200 p.m.) 119.67 Cumulative Index (1/7J82) 1097.51 ANTHONY W. TABELL DELAFIELD, HARVEY, TABELL No Ialement or epre5Ion of opinion or any other motler herein contOlned is, or IS to be deemed to be, directly or Indirectly, on offer or the soliCitation of on offer to buy Of sell any sec;unly referred to or mentioned The motter Is presented merely for the convenlenc of the subscriber While Ne believe the sources of our information to be reliable, we In no way repreent or guarantee the accurocy thereof nor of the statement mude herem Any action 10 be token by the subscriber should be based on hiS own InvesTlgahon and Informotlon Janney Montgomery Scotl, Inc, as a corporation, and lIs officers or employees, may now have, or may latcr tole, POltlOni or trades In respect to any securities mentioned In thiS or any future ISUe, and such pOSitIOn rnoy be different from any views now or hereafter expressed In this or ony other ISue Janney Montgomery Scott, Inc, which IS registered with the SEC os on Investment odvisor, moy give adVice to Its Investment adVisory and other customers Independently of any statements mode In ThiS or In any other Issue Further Information on any security mentioned herein 15 available on requesT