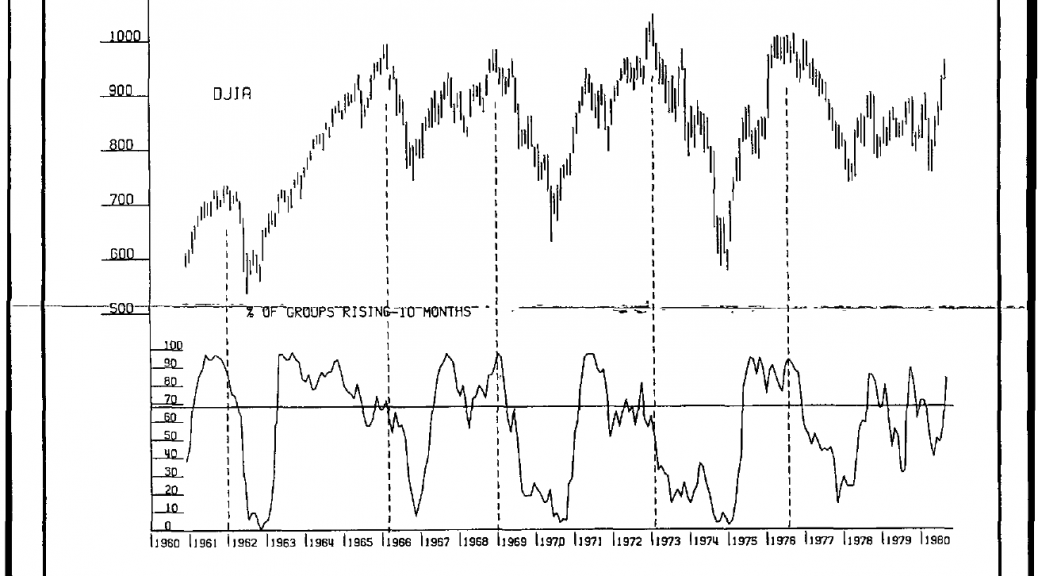 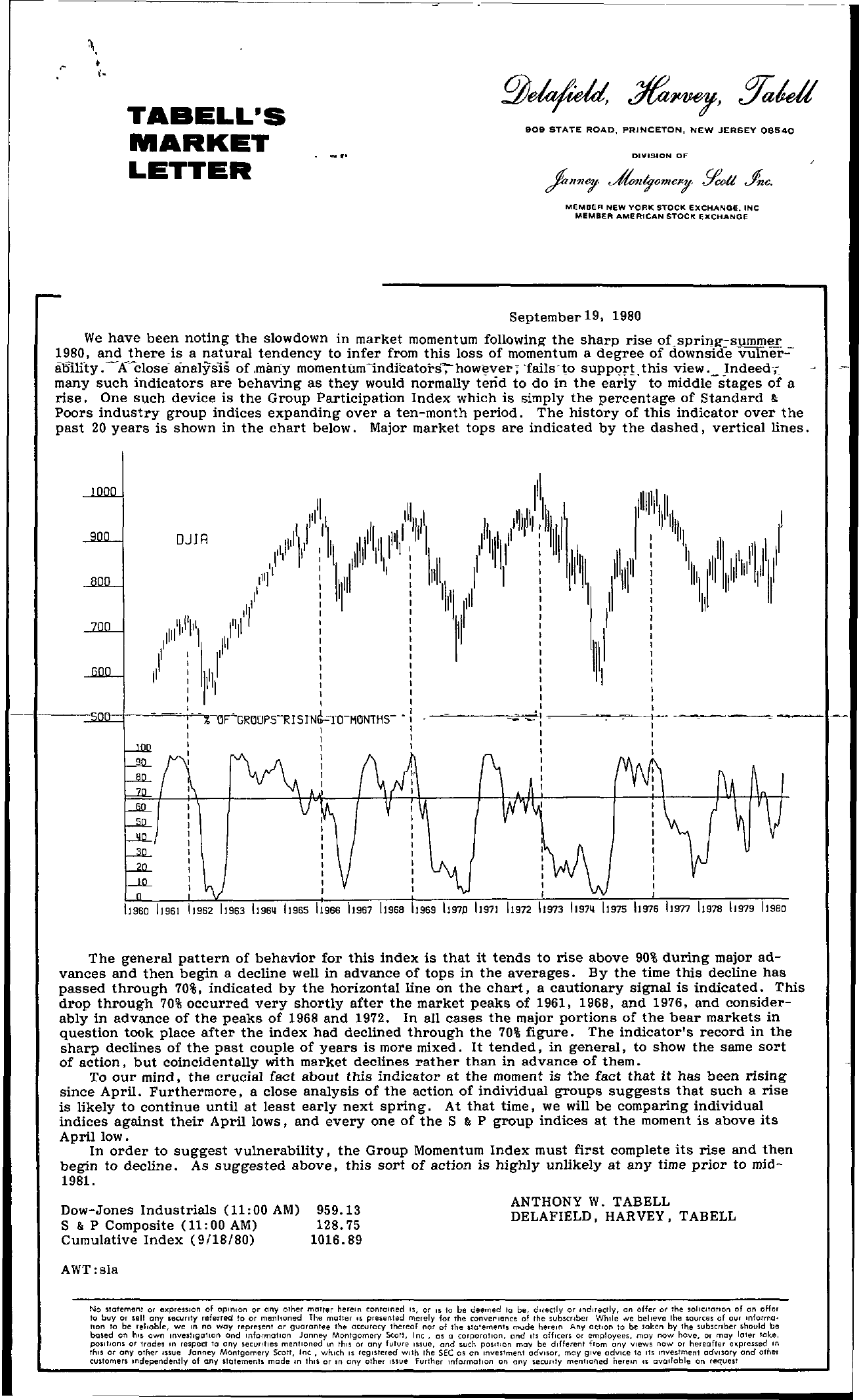 '. ,. TABELL'S MARKET – …… LETTER 909 STATE ROA.D, PRINCETON, NEW JERSEY 08540 DIVISION OF MEMBER NEW VORl( STOCK EXCHANGE. INC MEMBER AMERICAN STOCI( eXCHANGE September 19, 1980 We have been noting the slowdown in market momentum following- the sharp rise of,spring–summer 1980, and there is a natural tendency to infer from this loss of momentum a degree of downside vulner– alllifty .- A'-close- analysIs of .many however; 'fails -to suPP'!. this view. Indeed-, many such indicators are behaving as they would normally tend to do in the early to middle stages of a rise. One such device is the Group Participation Index which is simply the percentage of Standard 81 Poors industry group indices expanding over a ten-month period. The history of this indicator over the past 20 years is shown in the chart below. Major market tops are indicated by the dashed, vertical lines. DJ1R I I I I I II I'S60 I'S61 l,s62 I'S63 iIS6 iIS6S iIS66 iIS67 1,968 iIS69 iI97P iI971 I'S72 iI973 iIS7 I'S75 iI976 iIm I'S78 1,979 iI980 The general pattern of behavior for this index is that it tends to rise above 90 during major ad- vances and then begin a decline well in advance of tops in the averages. By the time this decline has passed through 70, indicated by the horizontal line on the chart, a cautionary signal is indicated. This drop through 70 occurred very shortly after the market peaks of 1961, 1968, and 1976, and considerably in advance of the peaks of 1968 and 1972. In all cases the major portions of the bear markets in question took place after the index had declined through the 70 figure. The indicator's record in the sharp declines of the past couple of years is more mixed. It tended, in general, to show the same sort of action, but coincidentally with market declines rather than in advance of them. To our mind, the crucial fact about this indicator at the moment is the fact that it has been rising since April. Furthermore, a close analysis of the action of individual groups suggests that such a rise is likely to continue until at least early next spring. At that time, we will be comparing individual indices against their April lows, and everyone of the S & P group indices at the moment is above its April low . In order to suggest vulnerability, the Group Momentum Index must first complete its rise and then begin to decline. As suggested above, this sort of action is highly unlikely at any time prior to mid- 1981. Dow-Jones Industrials (1100 AM) 959.13 S 81 P Composite (11 00 AM) 128.75 Cumulative Index (9/18/80) 1016.89 ANTHONY W. TABELL DELAFIELD, HARVEY, TAB ELL AWTsla No slatem(lnt or expression of opinion or any other motter herein contained or IS 10 be deemed to be, directly or indirectly, on offer or the SOllCllotlon of an offer 10 buy or sell any security referred to or mentioned The moiler IS presented merely for Ihe converlence of Ihe subscflber While Ne believe the sources of our Informa- lion to be reliable, we In no way represent or guarantee the occurocy Ihereof nor of the Slo'ements mude herein Any action 10 be Token by the Subscflber should be based on I'll! own Invesllgal10n and Information Janney Montgomery Scott, Inc, as a corporation, and 115 offICers or employees, moy now hove, or may 'aler lake, poltlons Of 1M respect 10 any seCUrities mentioned In thiS or ony future Issue, ond such pOSITIon may be different from any views now or hereofter c-.;pressed III IhlS or ol'ly olher lSue Janney Montgomery Scali, Int. whlth IS registered With the SEC as on IOvestment adVisor, moy give adVice 10 Its Investment adVisory and olhel customers II'Idependently of any statements made 11'1 Ihls or In ony other Issue Furlher mformollon on any secunty mentioned herem IS avollable on request