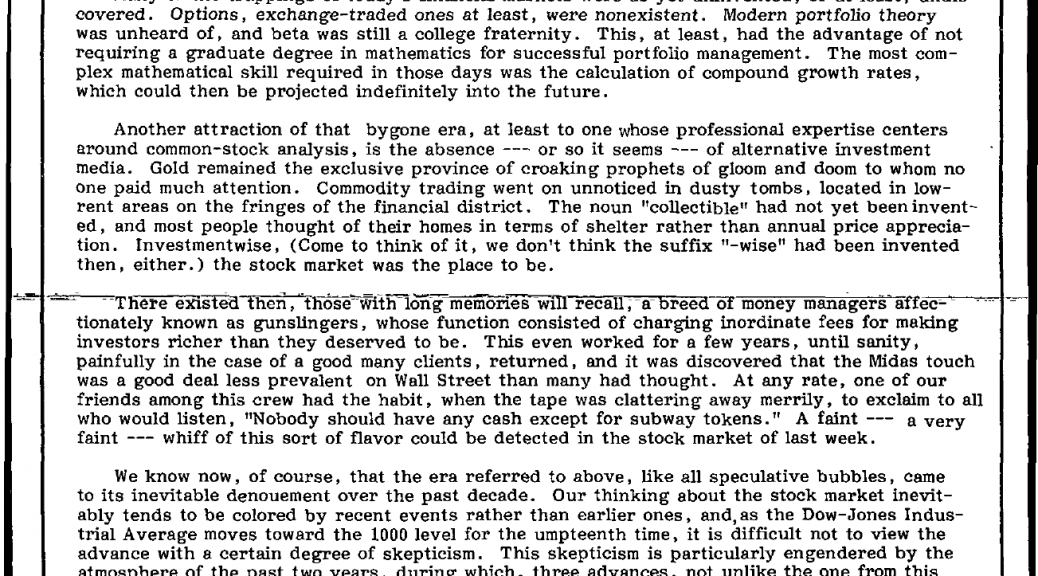 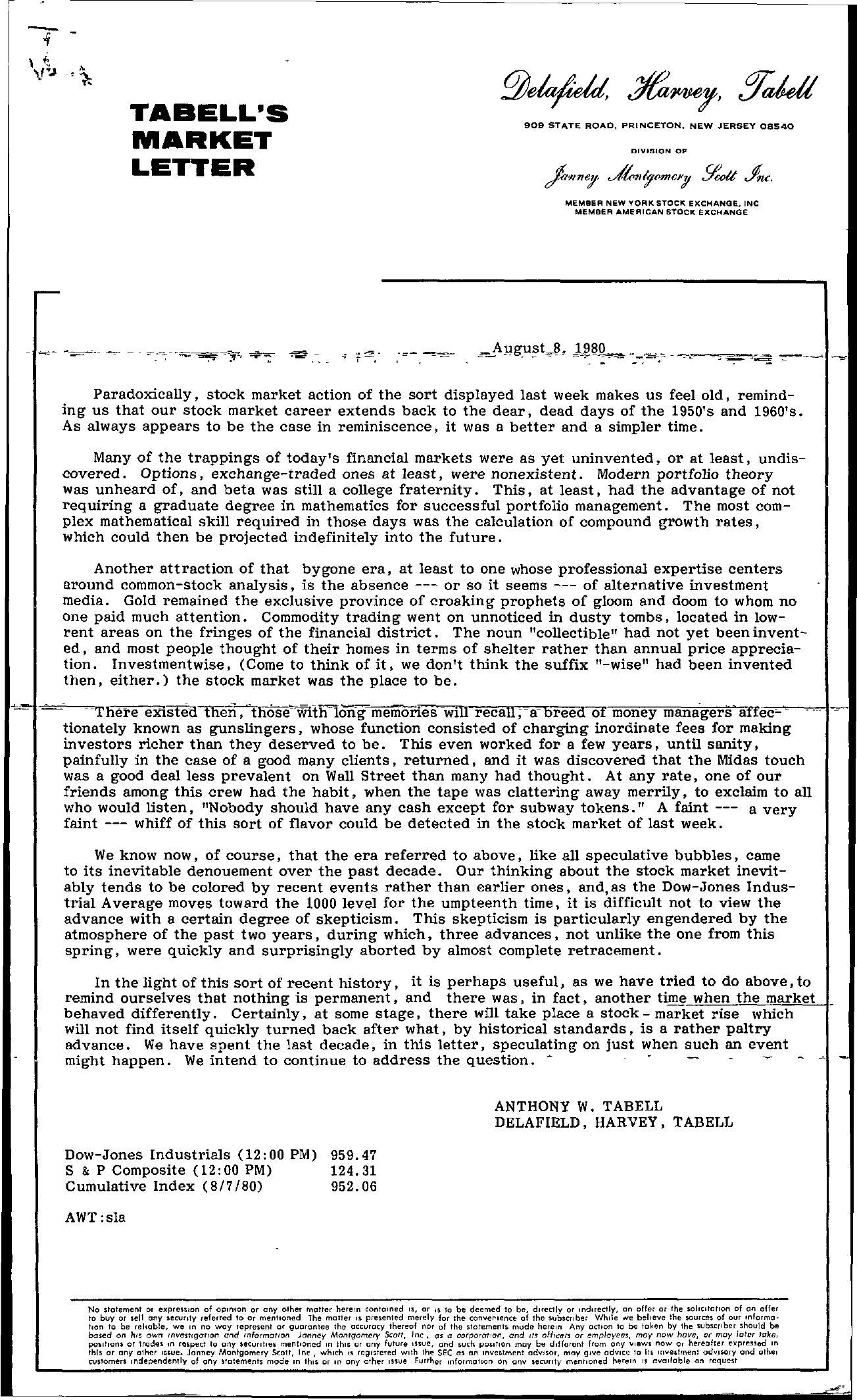 TABELL'S MARKET LETTER 909 STATE ROAD, PRINCETON. NEW JERSEY 08540 DIVISION OF MEMBER NEW VORK EXCHANGE, INC MEMBER AMERICAN STOCK EXCHANGE – – .. — — — Paradoxically, stock market action of the sort displayed last week makes us feel old, reminding us that our stock market career extends back to the dear, dead days of the 1950's and 1960's. As always appears to be the case in reminiscence, it was a better and a simpler time. Many of the trappings of today's financial markets were as yet uninvented, or at least, undiscovered. Options, exchange-traded ones at least, were nonexistent. Modern portfolio theory was unheard of, and beta was still a college fraternity. This, at least, had the advantage of not requiring a graduate degree in mathematics for successful portfolio management. The most complex mathematical skill required in those days was the calculation of compound growth rates, which could then be projected indefinitely into the future. Another attraction of that bygone era, at least to one whose professional expertise centers around common-stock analysis, is the absence — or so it seems — of alternative investment media. Gold remained the exclusive province of croaking prophets of gloom and doom to whom no one paid much attention. Commodity trading went on unnoticed in dusty tombs, located in lowrent areas on the fringes of the financial district. The noun collectible had not yet been invented, and most people thought of their homes in terms of shelter rather than annual price appreciation. Investmentwise, (Come to think of it, we don't think the suffix -wise had been invented then, either.) the stock market was the place to be. Ttiere eXlstedthen, tliosEi' with-long memories will recall, a breed Of money managers tionately known as gunslingers, whose function consisted of charging inordinate fees for making investors richer than they deserved to be. This even worked for a few years, until sanity, painfully in the case of a good many clients, returned, and it was discovered that the Midas touch was a good deal less prevalent on Wall Street than many had thought. At any rate, one of our friends among this crew had the habit, when the tape was clattering away merrily, to exclaim to all who would listen, Nobody should have any cash except for subway tokens. A faint — a very faint — whiff of this sort of flavor could be detected in the stock market of last week. We know now, of course, that the era referred to above, like all speculative bubbles, came to its inevitable denouement over the past decade. Our thinking about the stock market inevitably tends to be colored by recent events rather than earlier ones, and, as the Dow-Jones Industrial Average moves toward the 1000 level for the umpteenth time, it is difficult not to view the advance with a certain degree of skepticism. This skeptiCism is particularly engendered by the atmosphere of the past two years, during which, three advances, not unlike the one from this spring, were quickly and surprisingly aborted by almost complete retracement. In the light of this sort of recent history, it is perhaps useful, as we have tried to do above, to remind ourselves that nothing is permanent, and there was, in fact, another time when the market behaved differently. Certainly, at some stage, there will take place a stock – market rise which will not find itself quickly turned back after what, by historical standards, is a rather paltry advance. We have spent the last decade, in this letter, speculating on just when such an event might happen. We intend to continue to address the question. Dow-Jones Industrials (12 00 PM) 959.47 S & P Composite (12 00 PM) 124.31 Cumulative Index (8/7/80) 952.06 AWT sla ANTHONY W. TABELL DELAFIELD, HARVEY, TABELL No statement or C)(prenlOn of opinion or ony olner motter herein contOlned IS, or Il 10 be deemed 10 he, directly or indirectly, on offer or the 501lCIIotion of on offer to buy or sell ony secunty referred to or mentioned The molter 1 presented merely for the converlena of the subscriber While we believe Ihe sources of our mforma hon 10 be reliable, we III no way represent or guarantee thC! accuracy thereof nor of the statements mude herein Any OChon to be token by the subscriber shOuld be based on hiS own Investlgotlon and Information Janney Montqomery Scott, Inc, as a oorporC/lorT, and liS offICers or employees, may now have, cr may latcr toke, positions or trades In respect to any seCUrities mentioned In thiS or any future usue, ond such POSition may be different from any views now or hereafter expressed In this or ony other Issue. Jonney Montgomery Scott, In(, whICh IS registered With Ihe SEC as an Irwestmenl adVisor, moy give adVice to lIS 1Ilves!menl adVISOry and other cvlfomers Independently of any Slotements mode In thiS or rn any other Issue Further Information on onv securrty mentioned herem IS available on request