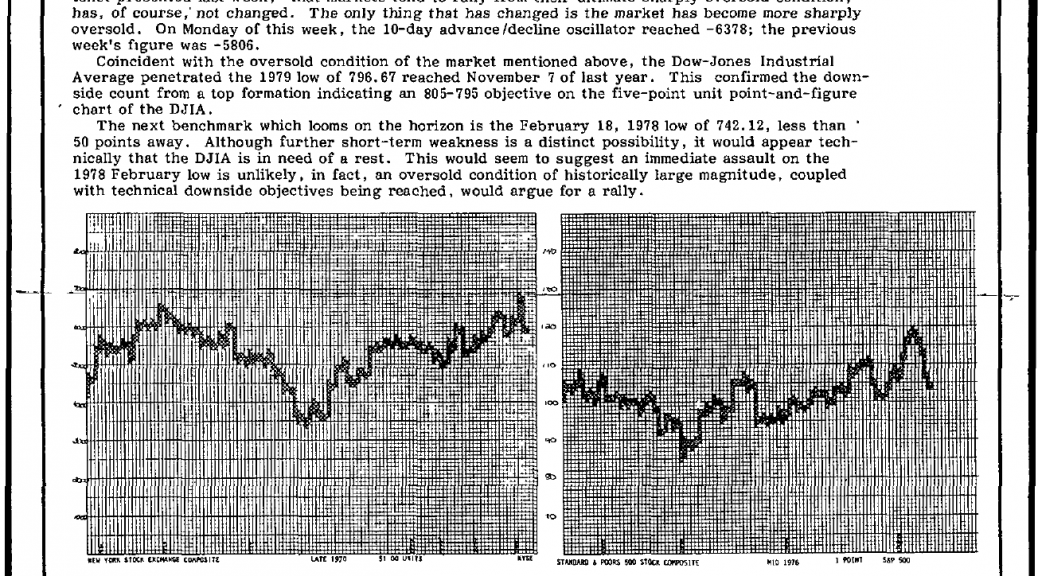 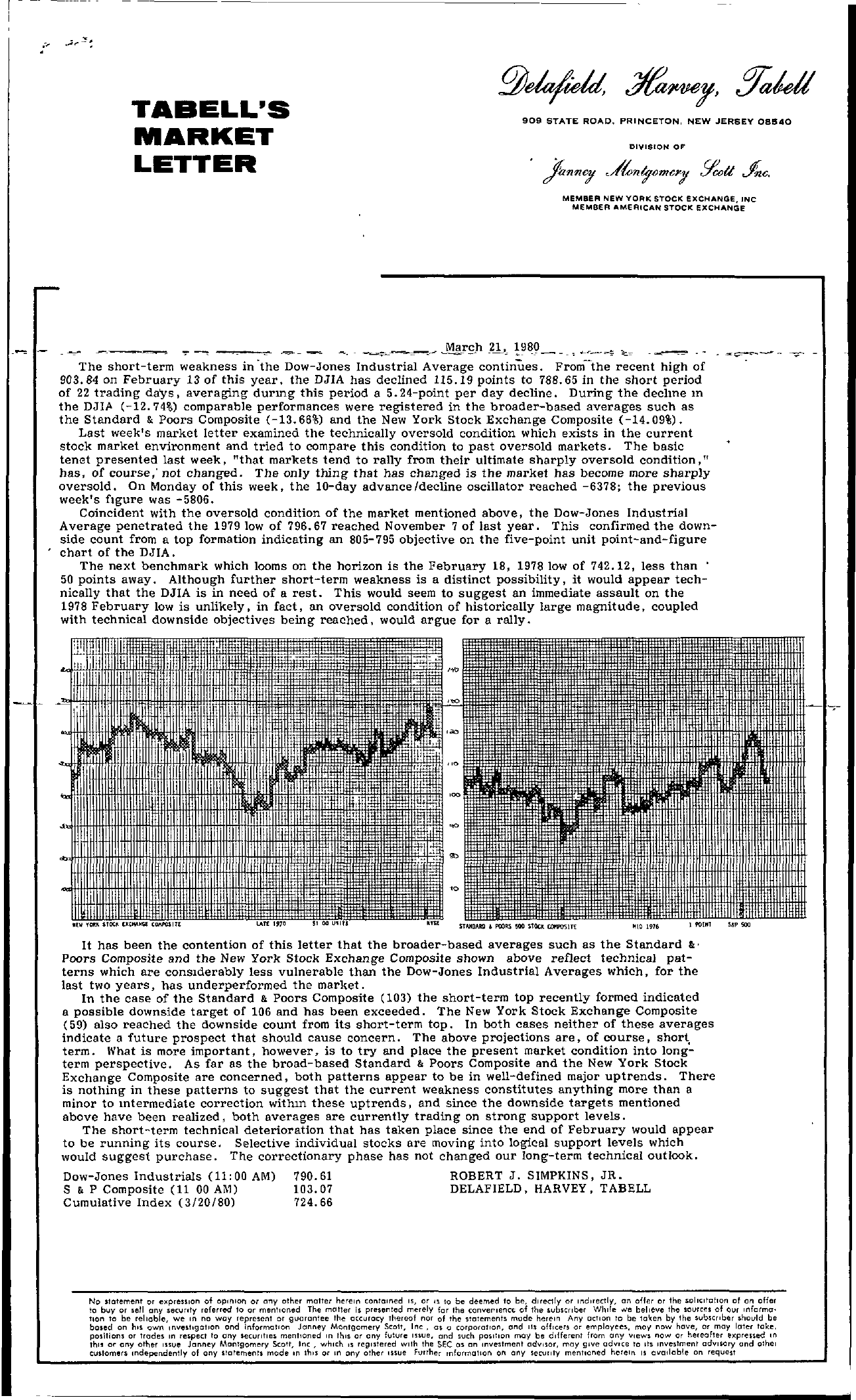 TABELL'S MARKET LETTER 909 STATE ROAD. PRINCETON, NEW JERSEY 08540 DIYISION OF MEMBEFI NEW VORl( STOCK eXCHANGE, INC MEMBER AMERICAN STOCK EXCHANGE The short-term weakness in the Dow-Jones Industrial Average continues. From the recent high of 903.84 on February 13 of this year. the DJIA has declined 115.19 points to 788.65 in the short period of 22 trading da'ys. averaging durmg this period a 5.24-point per day decline. During the declme In the DJIA (-12.74) comparable performances were registered in the broader-based averages such as the Standard & Poors Composite (-13.66) and the New York Stock Exchange Composite (-14.09). Last week's market letter examined the technically oversold condition which exists in the current stock market environment and tried to compare this condition to past oversold markets. The basic tenet presented last week, that markets tend to rally from their ultimate sharply oversold condition, If has. of course,' not changed. The only thing that has changed is the market has become more sharply oversold. On Monday of this week. the 10-day advance/decline oscillator reached the previous week's fIgure was -5806. Coincident with the oversold condition of the market mentioned above, the Dow-Jones Industrial Average penetrated the 1979 low of 796.67 reached November 7 of last year. This confirmed the down- side count from a top formation indicating an 805-795 objective on the five-point unit point-and-figure chart of the DJIA. The next benchmark which looms on the horizon is the February 18, 1978 low of 742.12, less than' 50 points away. Although further short-term weakness is a distinct possibility, it would appear tech- nically that the DJIA is in need of a rest. This would seem to suggest an immediate assault on the 1978 February low is unlikely. in fact, an oversold condition of historically large magnitude. coupled with technical downside objectives being reached, would argue for a rally. It has been the contention of this letter that the broader-based averages such as the Standard &' Poors Composite and the New York Stock Exchange Composite shown above reflect technical patterns which are conSIderably less vulnerable than the Dow-Jones Industrial Averages which, for the last two years, has underperformed the market. In the case of the Standard & Poors Composite (103) the short-term top recently formed indicated a possible downside target of 106 and has been exceeded. The New York Stock Exchange Composite (59) also reached the downside count from its short-term top. In both cases neither of these averages indicate a future prospect that should cause concern. The above projections are. of course, short. term. What is more important. however, is to try and place the present market condition into longterm perspective. As far as the broad-based Standard & Poors Composite and the New York Stock Exchange Composite are concerned. both patterns appear to be in well-defined major uptrends. There is nothing in these patterns to suggest that the current weakness constitutes anything mOre than a minor to mtermediate correction withIn these uptrends, and since the downside targets mentioned above have been realized. both averages are currently trading on strong support levels. The short-term technical deterioration that has taken place since the end of February would appear to be running its course. Selective individual stocks are moving into logical support levels which would suggest purchase. The correctionary phase has not changed our long-term technical outlook. Dow-Jones Industrials (11 00 AM) 790.61 S & P Composite (11 00 AM) 103.07 Cumulative Index (3/20/80) 724.66 ROBERT J. SIMPKINS, JR. DELAFIELD, HARVEY, TABELL No statement or exprenlon of opinion or any other matter herein contained IS, or to be deemed to be, dlreclly or Indirectly, (Ill offer or the of an offer to buy or any security referred to or mentIOned The molter Is presented merely for the convenience of the subSCriber While oNe believe the sources of our Informa tlon to be relloble, we In no way represent or guarantee the thereaf nor of the mude herein Any to be loken by the subSCriber should be bosed on hiS own Investigation and Information Janney MOntgomery Scolt, , as a corporation, ond It offICers or employees, moy now have, or may later take, posll!ons or Ir!;ldes In respect loony seCUrities mentioned In thiS or any future Issue, and such pOSition may be ddferent from any views now or hereafter expressed In Ihl! or any other Issue Jannty Montgomery Scott, Inc, which IS registered With the SEC os an Investment adVisor, may give odvtce to Its Investmenl OdVIKlty and olhel customers Independently of any stalements mode In ,I-lIS or In ony other l5ue further IIlformatlon on any 5eC\Hlty mentIOned herein IS avaIlable on reque5t