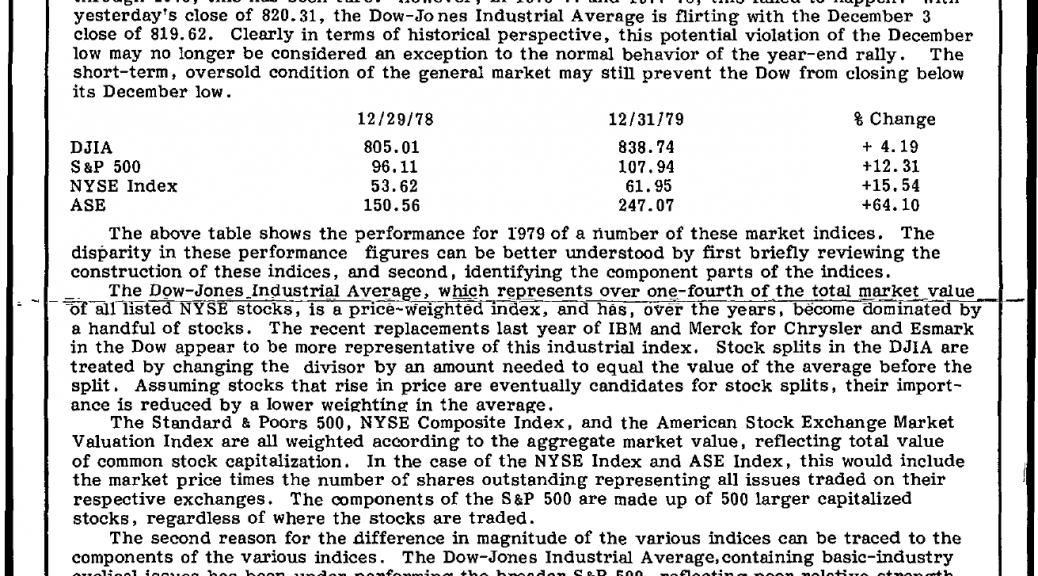 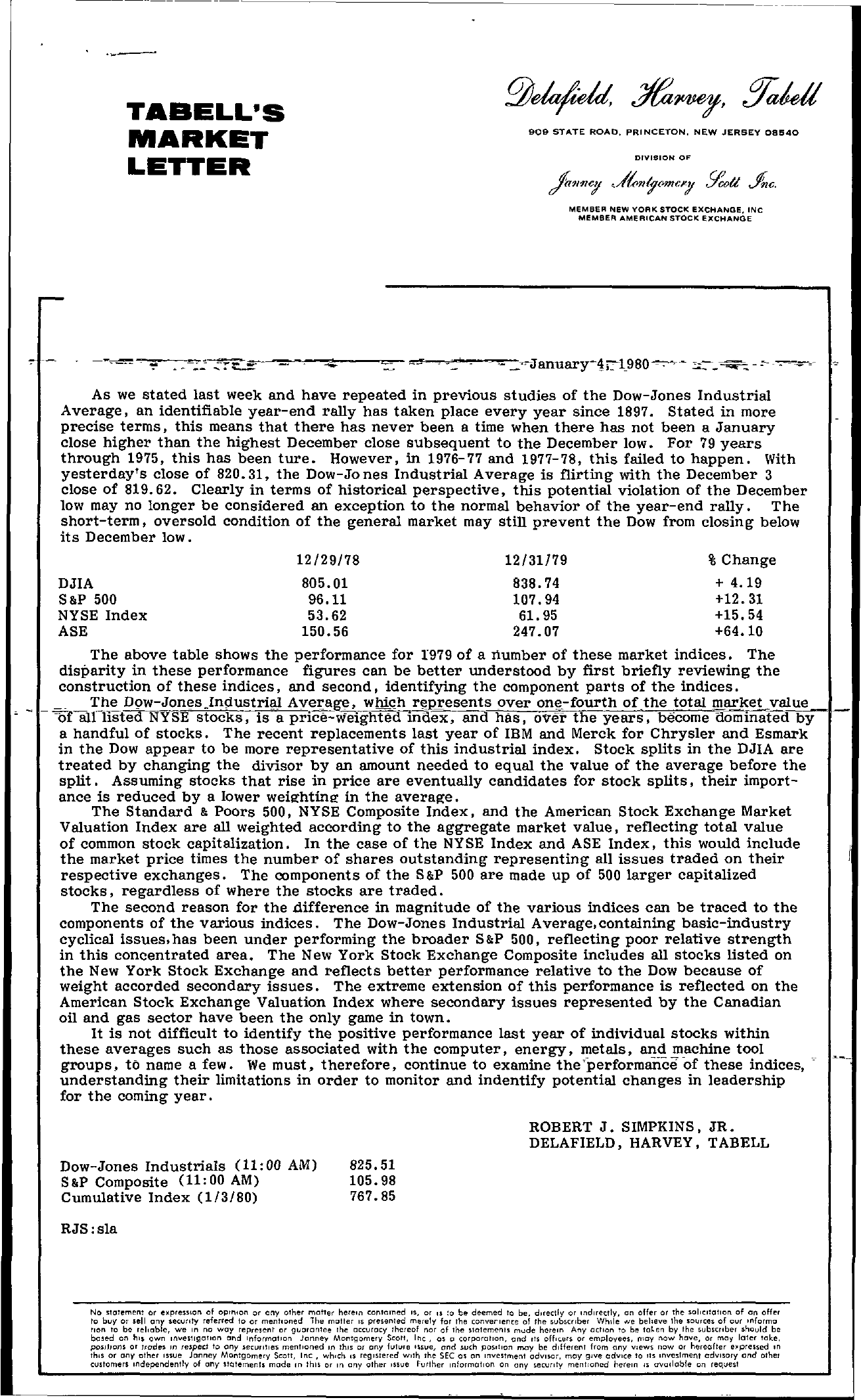 —————————————————- TABELL'S MARKET LETTER 909 STATE ROAD, PRINCETON, NEW JERSEY 08540 DIVISION OF MEMBER NEW YORK STOCK EXCHANGE. INC MEMBER AMERICAN STOCK EXCHANGE As we stated last week and have repeated in previous stUdies of the Dow-Jones Industrial Average. an identifiable year-end rally has taken place every year since 1897. Stated in more precise terms. this means that there has never been a time when there has not been a January close higher than the highest December close subsequent to the December low. For 79 years through 1975. this has been ture. However. in 1976-77 and 1977-78. this failed to happen. With yesterday's close of 820.31. the Dow-Jones Industrial Average is flirting with the December 3 close of 819.62. Clearly in terms of historical perspective. this potential violation of the December low may no longer be considered an exception to the normal behavior of the year-end rally. The short-term. oversold condition of the general market may still prevent the Dow from closing below its December low. 12/29/78 12/31/79 Change DJIA S&P 500 NYSE Index ASE 805.01 96.11 53.62 150.56 838.74 107.94 61. 95 247.07 4.19 12.31 15.54 64.10 The above table shows the performance for 1979 of a rtumber of these market indices. The disparity in these performance figures can be better understood by first briefly reviewing the construction of these indices. and second. identifying the component parts of the indices. The D9w-Jones.lndustril1J Average. which rellresents over one-fourth of the total -of all listed NYSE stocks. is a price-weighted inaex. and has. over the years. become nominated by a handful of stocks. The recent replacements last year of IBM and Merck for Chrysler and Esmark in the Dow appear to be more representative of this industrial index. Stock splits in the DJIA are treated by changing the divisor by an amount needed to equal the value of the average before the split. Assuming stocks that rise in price are eventually candidates for stock splits. their importance is reduced by a lower weighting in the average. The Standard & Poors 500. NYSE Composite Index. and the American Stock Exchange Market Valuation Index are all weighted according to the aggregate market value. reflecting total value of common stock capitalization. In the case of the NYSE Index and ASE Index. this would include the market price times the number of shares outstanding representing all issues traded on their respective exchanges. The components of the S &p 500 are made up of 500 larger capitalized stocks. regardless of where the stocks are traded. The second reason for the difference in magnitude of the various indices can be traced to the components of the various indices. The Dow-Jones Industrial Average.containing basic-industry cyclical issues. has been under performing the broader S&P 500. reflecting poor relative strength in this concentrated area. The New York Stock Exchange Composite includes all stocks listed on the New York Stock Exchange and reflects better performance relative to the Dow because of weight accorded secondary issues. The extreme extension of this performance is reflected on the American Stock Exchange Valuation Index where secondary issues represented by the Canadian oil and gas sector have been the only game in town. It is not difficult to identify the positive performance last year of individual stocks within these averages such as those associated with the computer. energy. metals. and machine tool groups. to name a few. We must, therefore. continue to examine the 'performaD.ce of these indices. understanding their limitations in order to monitor and indentify potential changes in leadership for the coming year. Dow-Jones Industrials (11 00 AM) S&p CompOsite (1100 AM) Cumulative Index (1/3/80) 825.51 105.98 767.85 ROBERT J. SIMPKINS. JR. DELAFIELD. HARVEY. TABELL RJSsla No stotement or (!)(press!on of Op'flton or any other maHer here'n contained IS, or 1 0 be deemed to be, dIrectly or ,ndirectly, en offer or the soliCitation of on offer to buy or sell ony secunty referred 10 or mentioned 1he moiler IS presented merely for the converlenc 01 the subscnber While Ne beheve Ihe sOlsrces of our ,nforma t,on to be reliable, we In no way represent or guarantee the accuracy thereof nor of the statements mude hNeln Any action to be by the subscr.ber should be bosed on hl5 own Inve5tlgolmn and Information Janney Montgomery Scali, Inc, as a corporation, ond ,IS officers or employees, may now have, or may 10ler lake. pos,IJons or ,rades In respet' to any secufJlles mentioned In thJS or any future and SLlth position may be different frorn ony views now or hereafter In thiS or ony other lSue Janney Montgomery Scoll. Inc, wh,ch IS registered With Ihe SEC as on InvesllT1ent odvlsor. may gIve adVICe 10 Its Investment adVisory and other customers Independently of any slCllemenls made (n thiS or In any other Issue Furlher information on ony secunty mentIOned herein IS available on request