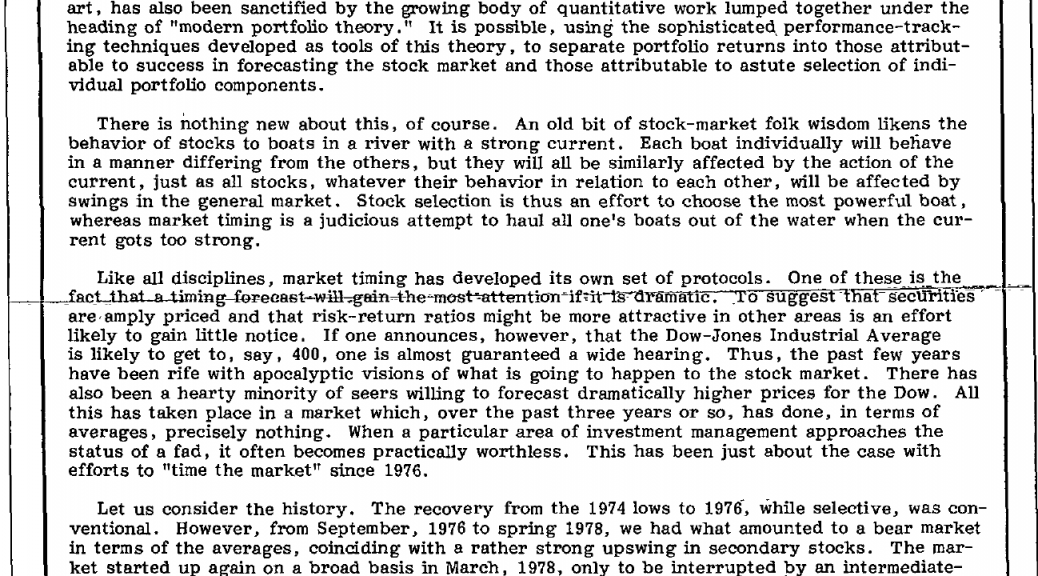 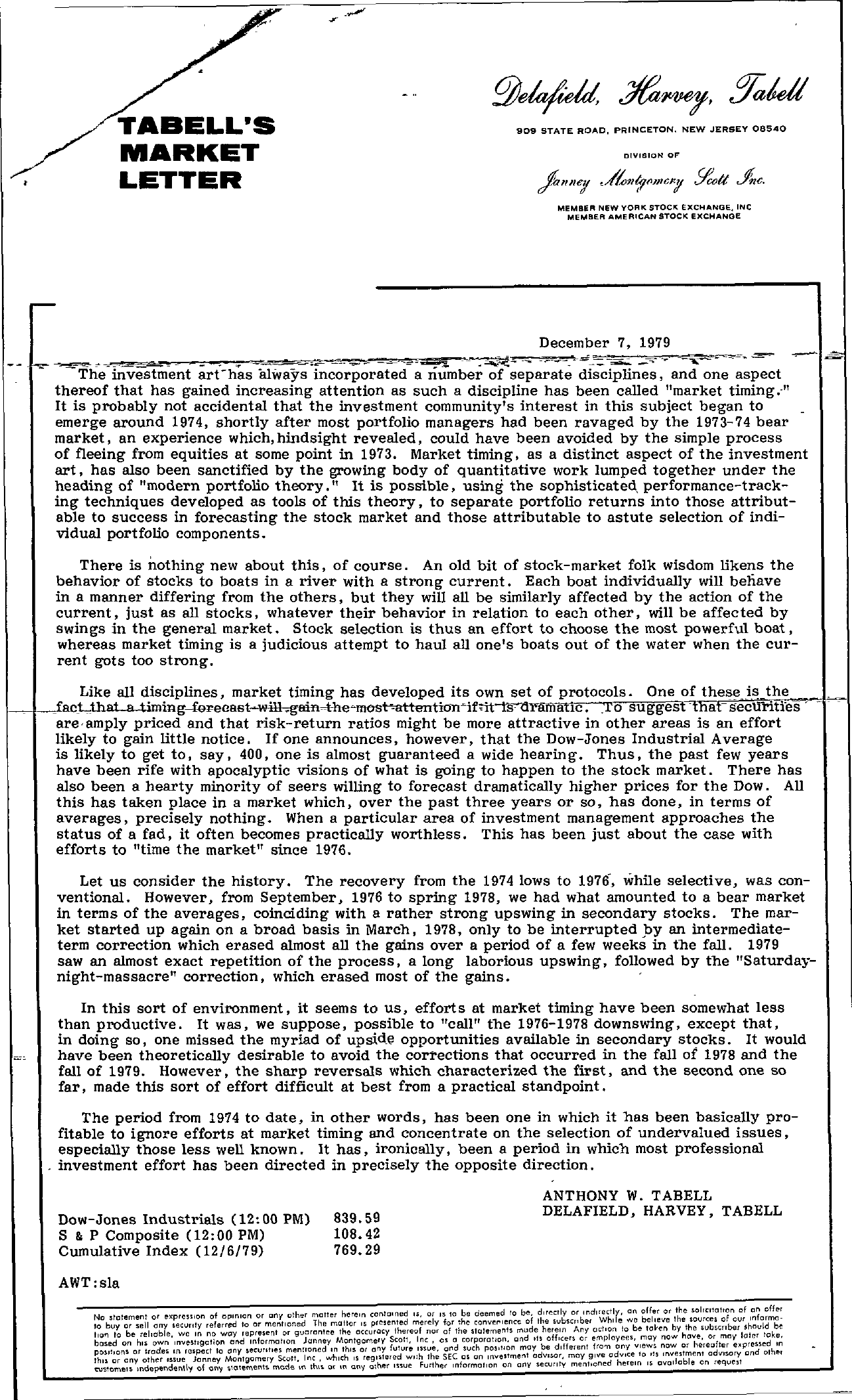 –J TABELL'S MARKET LETTER 909 STATE ROAD, PRINCETON, NEW JERSEY 08540 DIVISiON OF MEMBER New VORK STOCK eXCHANGE, INC MEMBER AMERICAN STOCK EXCHANGE December 7, 1979 — — '1' —–;..- — …. …–..- … The investment art-has hlways incorporated a number of separate disciplines, and one aspect thereof that has gained increasing attention as such a discipline has been called market timing.- It is probably not accidental that the investment community's interest in this subject began to emerge around 1974, shortly after most portfolio managers had been ravaged by the 1973-74 bear market, an experience which, hindsight revealed, could have been avoided by the simple process of fleeing from equities at some point in 1973. Market timing, as a distinct aspect of the investment art, has also been sanctified by the growing body of quantitative work lumped together under the heading of modern portfolio theory. It is possible, using the sophisticated, performance-tracking teChniques developed as tools of this theory, to separate portfolio returns into those attributable to success in forecasting the stock market and those attributable to astute selection of indi- vidual portfolio components. There is nothing new about this, of course. An old bit of stock-market folk wisdom likens the behavior of stocks to boats in a river with a strong current. Each boat individually will benave in a manner differing from the others, but they will all be similarly affected by the action of the current, just as all stocks, whatever their behavior in relation to each other, will be affected by swings in the general market. Stock selection is thus an effort to choose the most powerful boat, whereas market timing is a judicious attempt to haul all one's boats out of the water when the cur- rent gots too strong. Like all disciplines, market timing has developed its own set of protocols. One of theseis the f'sct..,that a fo suggest -that securities – – – are ,amply priced and that risk-return ratios might be more attractive in other areas is an effort likely to gain little notice. If one announces, however, that the Dow-Jones Industrial Average is likely to get to, say. 400, one is almost guaranteed a wide hearing. Thus, the past few years have been rife with apocalyptic visions of what is going to happen to the stock market. There has also been a hearty minority of seers willing to forecast dramatically higher prices for the Dow. All this has taken place in a market which, over the past three years or so, has done, in terms of averages. precisely nothing. When a particular area of investment management approaches the status of a fad, it often becomes practically worthless. This has been just about the case with efforts to time the market since 1976. Let us consider the history. The recovery from the 1974 lows to 1976, while selective, was con- ventional. However, from September, 1976 to spring 1978, we had what amounted to a bear market in terms of the averages, coinciding with a rather strong upswing in secondary stocks. The market started up again on a broad basis in March, 1978, only to be interruptedy an intermediateterm correction which erased almost all the gains over a period of a few weeks in the fall. 1979 saw an almost exact repetition of the process. a long laborious upswing, followed by the Saturdaynight-massacre correction, which erased most of the gains. In this sort of environment, it seems to us, efforts at market timing have been somewhat less than productive. It was, we suppose, possible to call the 1976-1978 downswing, except that, in doing so, one missed the myriad of upside opportunities available in secondary stocks. It would have been theoretically desirable to avoid the corrections that occurred in the fall of 1978 and the fall of 1979. However. the sharp reversals which characterized the first, and the second one so far, made this sort of effort difficult at best from a practical standpoint. The period from 1974 to date, in other words, has been one in which it has been basically profitable to ignore efforts at market timing and concentrate on the selection of undervalued issues, especially those less well known. It has, ironically, been a period in which most professional investment effort has been directed in precisely the opposite direction. Dow-Jones Industrials (12 00 PM) S & P Composite (1200 PM) Cumulative Index (12/6/79) 839.59 108.42 769.29 ANTHONY W. TABELL DELAFIELD, HARVEY, TABELL AWTsla No statement or of opinion or ony other moiler herein contolned 15, or IS 0 be deemed 10 be, directly or indirectly, on offer or the soircltalton of to buy or sell dny tecurlty referred to or mentIOned The mattcr IS presented merely for the ad' thhe Into be reliable we In no woy represent or guarantee the occuracy Ihereof nor af the statements ml.l e ereln ny a hll Ion el0 e a en be I I tak on hiS own 'investigation and information Janney Montgomery ciposltloM or trades 1/\ respect to ony secuntles menlloned In thl5 Of any Scolt, future Inc, as a Issue, and corporation, and ,ts officers or such POSit. on moYdbe different efrmo-pnloyeneys, may now thl! or on other Issue Janney Montgomery Scot!, Inc, whICh IS registered With Ihe SEC as on mvetment a v,sor, may give 0 vIC 0 rsed other C'lJstomtHS of eny ';'etements mede In thiS or I!\ eny other Inue Further information on any secullty mentioned herein IS available on request