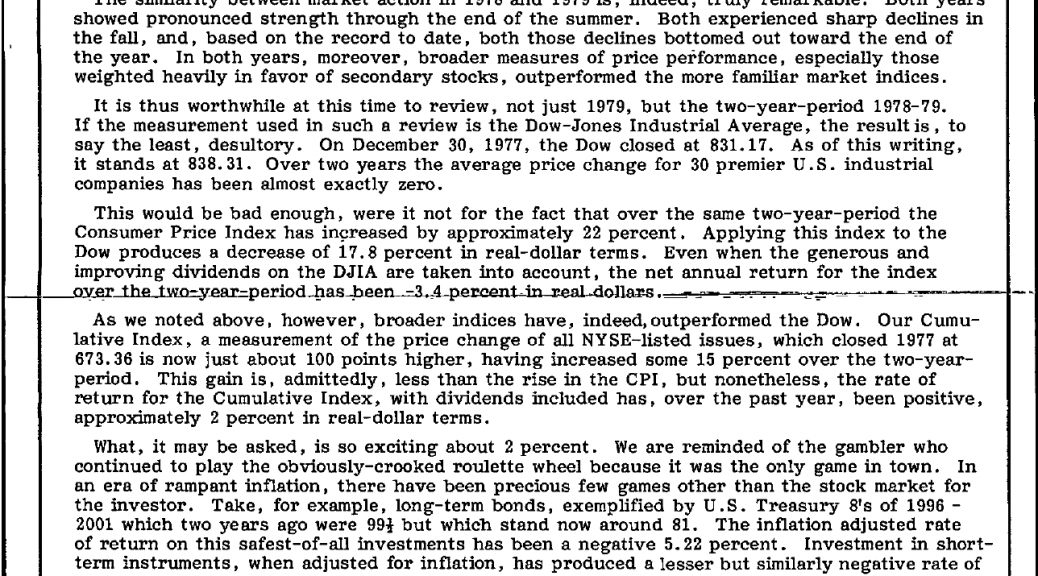 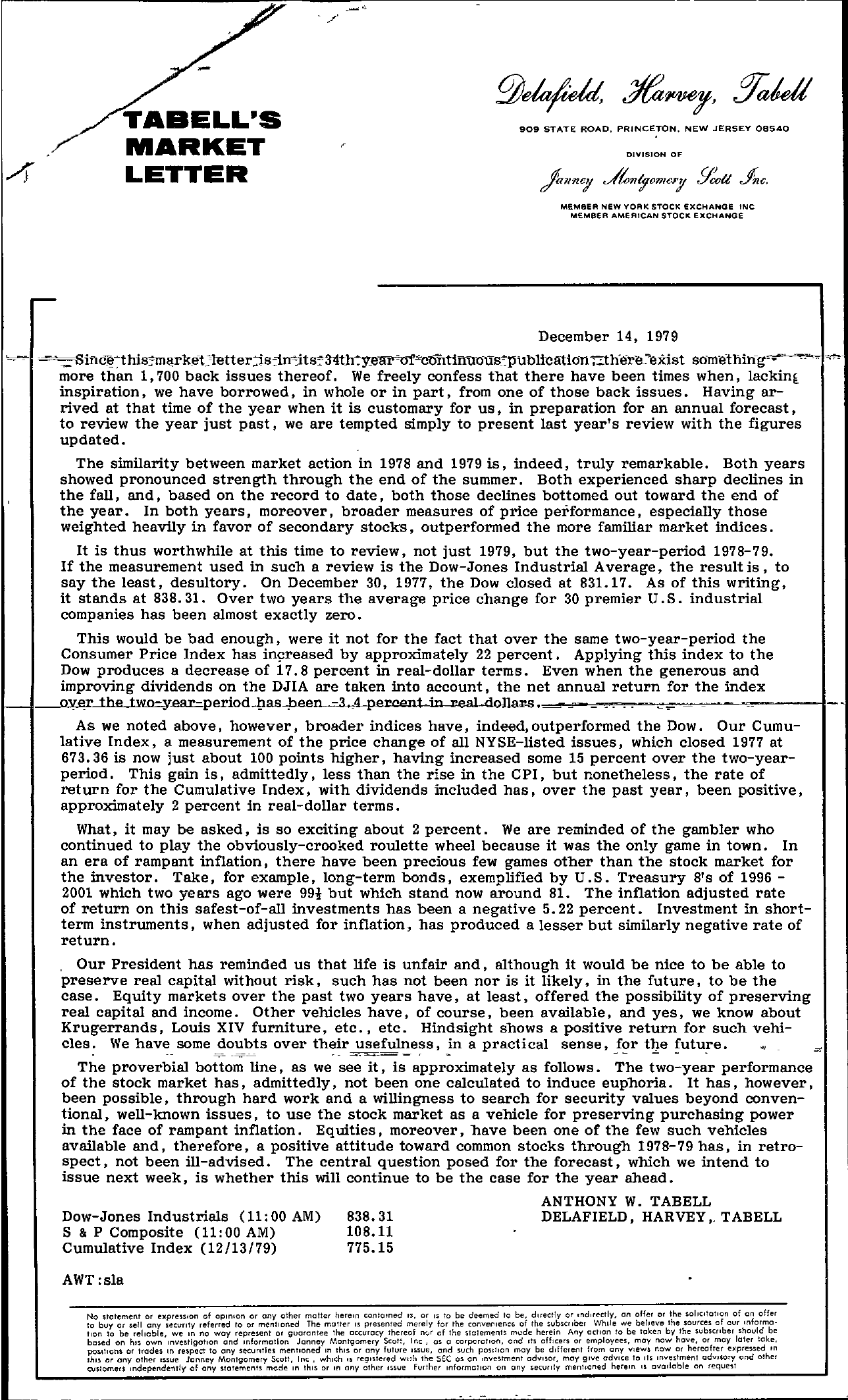 /' TABELL'S MARKET LETTER 909 STATE ROAD, PRINCETON. NEW JERSEY 08540 DIVISION OF MEMBER NEW VORK STOCK eXCHANGE INC MEMBER AMERICAN STOCK eXCHANGE December 14, 1979 ;.;.there'exist somethmg-w— -more tliim 1,700 back issues thereof. We freely confess that there have been times when, lackin inspiration, we have borrowed, in whole or in part, from one of those back issues. Having arrived at that time of the year when it is customary for us, in preparation for an annual forecast, to review the year just past, we are tempted simply to present last year's review with the figures updated. The similarity between market action in 1978 and 1979 is, indeed, truly remarkable. Both years showed pronounced strength through the end of the summer. Both experienced sharp declines in the fall, and, based on the record to date, both those declines bottomed out toward the end of the year. In both years, moreover, broader measures of price performance, especially those weighted heavily in favor of secondary stocks, outperformed the more familiar market indices. It is thus worthwhile at this time to review, not just 1979, but the two-year-period 1978-79. If the measurement used in such a review is the Dow-Jones Industrial Average, the result is, to say the least, desultory. On December 30, 1977, the Dow closed at 831.17. As of this writing, it stands at 838.31. Over two years the average price change for 30 premier U .8. industrial companies has been almost exactly zero. This would be bad enough, were it not for the fact that over the same two-year-period the Consumer Price Index has in9reased by approximately 22 percent. Applying this index to the Dow produces a decrease of 17.8 percent in real-dollar terms. Even when the generous and improving dividends on the DJIA are taken into account, the net annual return for the index -3 A percent..in-r-eaL.dollar-s. As we noted above, however, broader indices have, indeed, outperformed the Dow. Our Cumu- lative Index, a measurement of the price change of all NY8E-listed issues, which closed 1977 at 673.36 is now just about 100 points higher, having increased some 15 percent over the two-year- period. This gain is, admittedly, less than the rise in the CPI, but nonetheless, the rate of return for the Cumulative Index, with dividends included has, over the past year, been positive, approximately 2 percent in real-dollar terms. What, it may be asked, is so exciting about 2 percent. We are reminded of the gambler who continued to play the obviously-crooked roulette wheel because it was the only game in town. In an era of rampant inflation, there have been precious few games other than the stock market for the investor. Take, for example, long-term bonds, exemplified by U.8. Treasury 8's of 19962001 which two years ago were 99t but which stand now around 81. The inflation adjusted rate of return on this safest-of-all investments has been a negative 5.22 percent. Investment in shortterm instruments, when adjusted for inflation, has produced a lesser but similarly negative rate of return. , Our President has reminded us that life is unfair and, although it would be nice to be able to preserve real capital without risk, such has not been nor is it likely, in the future, to be the case. Equity markets over the past two years have, at least, offered the possibility of preserving real capital and income. Other vehicles have, of course, been available, and yes, we know about Krugerrands, Louis XIV furniture, etc., etc. Hindsight shows a positive return for such vehi- cles.- We have some -d—o..u..b…ts over theiruseful-ness, -in a practical sense, -f-or th-e -futu-re. The proverbial bottom line, as we see it, is approximately as follows. The two-year performance of the stock market has, admittedly, not been one calculated to induce euphoria. It has, however, been possible, through hard work and a willingness to search for security values beyond conven- tional, well-known issues, to use the stock market as a vehicle for preserving purchasing power in the face of rampant inflation. Equities, moreover, have been one of the few such vehicles available and, therefore, a positive attitude toward common stocks through 1978-79 has, in retrospect, not been ill-advised. The central question posed for the forecast, which we intend to issue next week, is whether this will continue to be the case for the year ahead. Dow-Jones Industrials (11 00 AM) 8 & P Composite (11 00 AM) Cumulative Index (12/13/79) 838.31 108.11 775.15 ANTHONY W. TABELL DELAFIELD, HARVEY TABELL AWT sla No statement or e)(prelon of opinion or ony other molter herein contomed IS, or IS to be deemed 10 be, directly or ond'f('ctly, on offer or the sol,cltollon of on offer 10 buy or sell (my security referred to or mentioned The molter IS presented merely for the conveJ'llenCE; of the subscriber While we believe the SOluces of our informa- tion to be reliable we In no way represent or guarantee the accuracy thereof nyr of the statements mude herein Any action to be tok!!n by the subscriber should be based on hiS own'lnvestlgotlon and Informollon Janney Montgomery Scott, Inc, os a corpcrotlon, ond Its officers or employees, moy now hove, or may later lake, POSitiOns or trodes In respect 10 ony securities menlloned In Ihls or any future Issue, and such position may be different from any views r,ow or hereafter expressed In Ihls or ony olher Issue Janney MonTgomery tott, Inc, which IS registered Wllh the SEC as on rnvestment adVisor, may give adVice to ItS rnvestment adVisory and othel customers independenTly of ony statements mode In thiS or In any other Issue Further rnformotlon on any security mentioned herein IS available on request