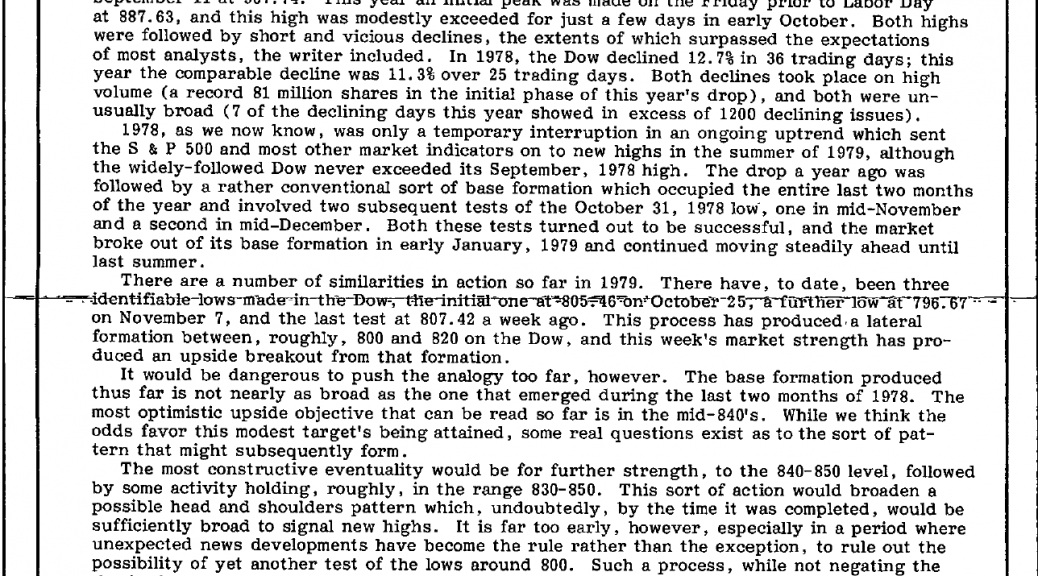 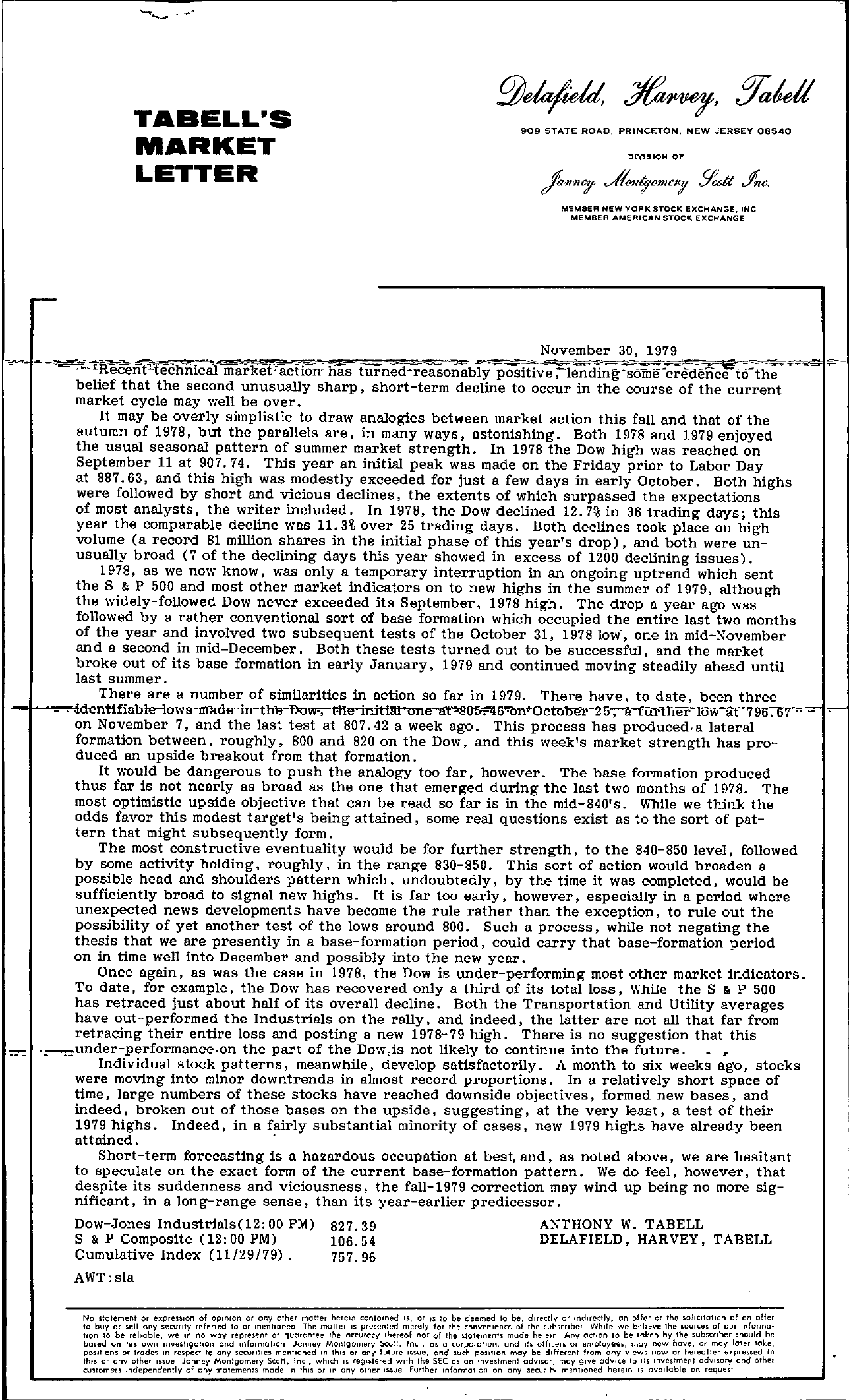 TABELL'S MARKET LETTER 909 STATE ROAD, PRINCETON. NEW JERSEY 08540 DIVISION OF MEM8ER NEW VOAK STOCI( EXCHANGE, INC MEMBER AMERICAN STOCI( EXCHANGE November 30, 1979 -.—…..'-.,'. . — , i!.. .. .. market'action- has turned-reasonably positive ;-lendings01lle-credence to-the belief that the second unusually sharp, short-term decline to occur in the course of the current market cycle may well be over It may be overly simplistic to draw analogies between market action this fall and that of the autumn of 1978, but the parallels are, in many ways, astonishing. Both 1978 and 1979 enjoyed the usual seasonal pattern of summer market strength. In 1978 the Dow high was reached on September 11 at 907.74. This year an initial peak was made on the Friday prior to Labor Day at 887.63, and this high was modestly exceeded for just a few days in early October. Both highs were followed by short and vicious declines, the extents of which surpassed the expectations of most analysts, the writer included. In 1978, the Dow declined 12.7 in 36 trading days; this year the comparable decline was 11. 3 over 25 trading days. Both declines took place on high volume (a record 81 million shares in the initial phase of this year's drop), and both were un- usually broad (7 of the declining days this year showed in excess of 1200 declining issues). 1978, as we now know, was only a temporary interruption in an ongoing uptrend which sent the S & P 500 and most other market indicators on to new highs in the summer of 1979, although the widely-followed Dow never exceeded its September, 1978 high. The drop a year ago was followed by a rather conventional sort of base formation which occupied the entire last two months of the year and involved two subsequent tests of the October 31, 1978 low', one in mid-November and a second in mid-December. Both these tests turned out to be successful, and the market broke out of its base formation in early January, 1979 and continued moving steadily ahead until last summer. There are a number of similarities in action so far in 1979. There have, to date, been three on November 7, and the last test at 807.42 a week ago. This process has produced,a lateral formation between, roughly, 800 and 820 on the Dow, and this week's market strength has produced an upside breakout from that formation. It would be dangerous to push the analogy too far, however. The base formation produced thus far is not nearly as broad as the one that emerged during the last two months of 1978. The most optimistic upside objective that can be read so far is in the mid-840's. While we think the odds favor this modest target's being attained, some real questions exist as to the sort of pat- tern that might subsequently form. The most constructive eventuality would be for further strength, to the 840- 850 level, fOllowed by some activity holding, roughly, in the range 830- 850. This sort of action would broaden a possible head and shoulders pattern which, undoubtedly, by the time it was completed, would be sufficiently broad to signal new highs. It is far too early, however, especially in a period where unexpected news developments have become the rule rather than the exception, to rule out the possibility of yet another test of the lows around 800. Such a process, while not negating the thesis that we are presently in a base-formation period, could carry that base-formation period on in time well into December and possibly into the new year. Once again, as was the case in 1978, the Dow is under-performing most other market indicators. To date, for example, the Dow has recovered only a third of its total loss, While the S & P 500 has retraced just about half of its overall decline. Both the Transportation and Utility averages have out-performed the Industrials on the rally, and indeed, the latter are not all that far from retracing their entire loss and posting a new 1978-79 high. There is no suggestion that this .. the part of the Dow,is not likely to continue into the future. Individual stock patterns, meanwhile, develop satisfactorily. A month to six weeks ago, stocks were moving into minor downtrends in almost record proportions. In a relatively short space of time, large numbers of these stocks have reached downside objectives, formed new bases, and indeed, broken out of those bases on the upside, suggesting, at the very least, a test of their 1979 highs. Indeed, in a fairly substantial minority of cases, new 1979 highs have already been attained. . Short-term forecasting is a hazardous occupation at best, and, as noted above, we are hesitant to speculate on the exact form of the current base-formation pattern. We do feel, however, that despite its suddenness and viciousness, the fall-1979 correction may wind up being no more significant, in a long-range sense, than its year-earlier predicessor. Dow-Jones Industrials(1200 PM) 827.39 S & P Composite (1200 PM) 106.54 Cumulative Index (11/29/79) 757.96 ANTHONY W. TABELL DELAFIELD, HARVEY, TABELL AWTsla .,… -.- No statement or expression of Opinion or any other motter herein contolned IS, or IS to be deemed to be, dlrectlv or Indirectly, on offer or the of on offer 10 buy or sell cny securtty refe-red 10 or mentioned The molter IS presented merely for the converlenct of the subSCriber While we believe the sources of our informa- tion 10 be reliable, we m no way represent or guarantee the accuracy thereof nor of the statements moJde he eln Any oc110n 10 be token by the subSCriber should be based on hl own investigatiOn ond Informotlon Jonney Montgomery Scott. Inc, as a corporollon, and 11 officers or employees, may now have, or may loter toke, POSitionS or trades In respec1 to any seCUrities mentioned In thiS or ony future lI;sue, and such position may be different from any views now or hereafter expressed In thl5 or any other Issue Janney Montgomery Scali, Inc, which IS registered With the SEC as on Investment adVisor, may give adVice to Its Investment adVISOry and othel customers Independently of any statements mode In thiS or In any other Issue Further information on any security mentioned herein IS available on request