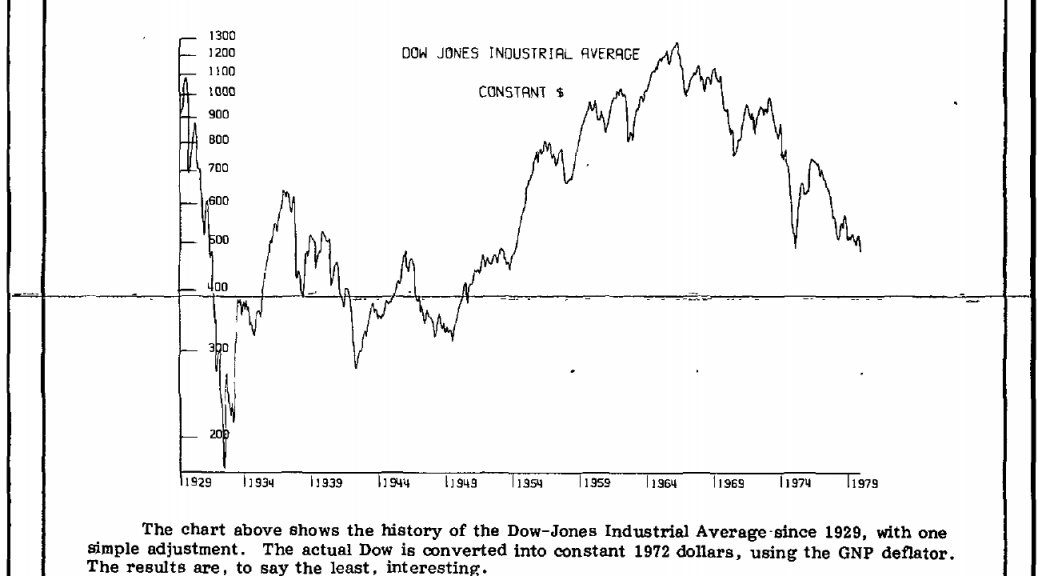 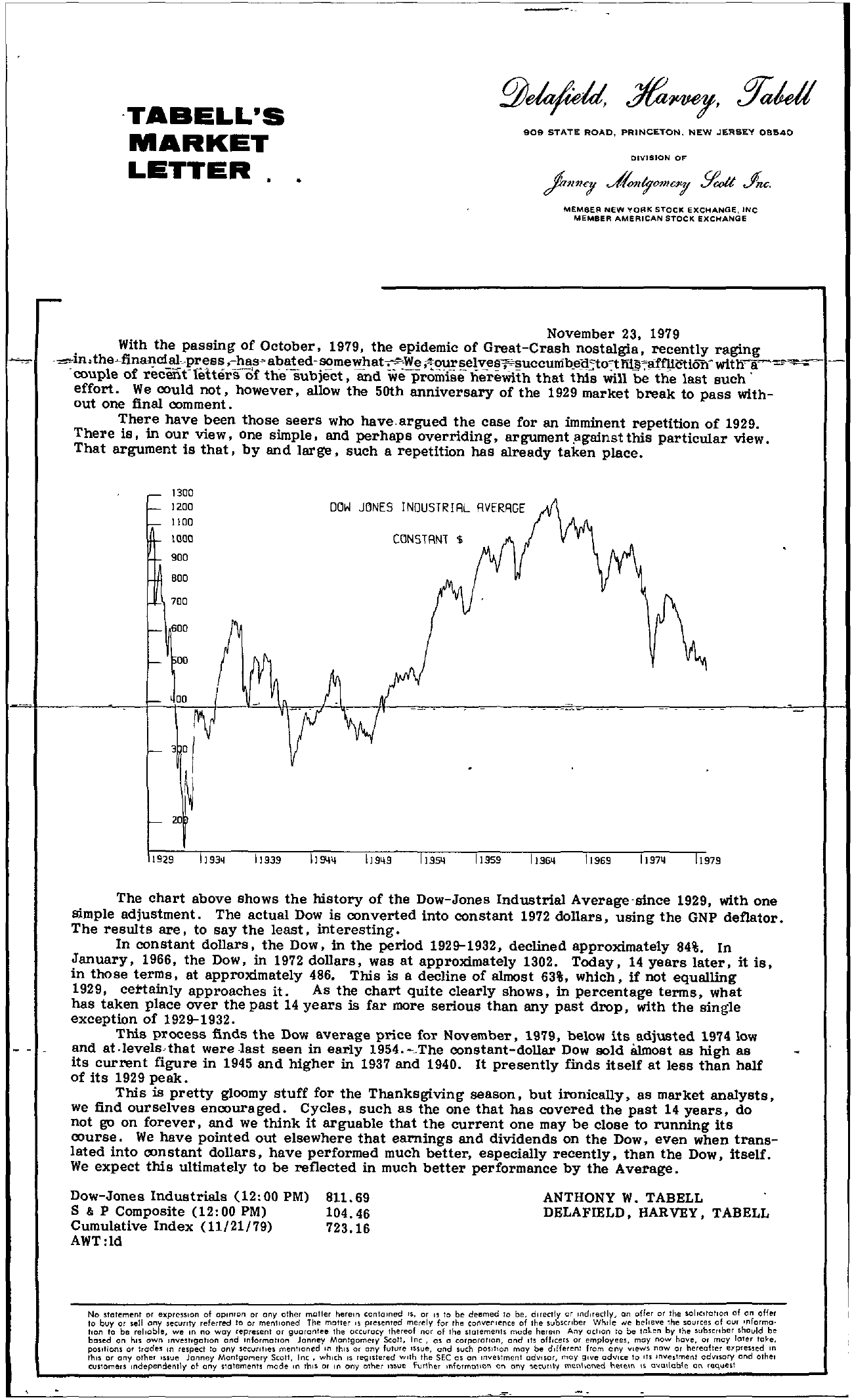 'TABELL'S MARKET LETTER 909 STATE ROAD, PRINCETON, NEW JERSEY 08540 DIVISION OF ME.MBER NEW YORI( STOCI( EXCHANGE, INC MEMBER AMERICAN STOCK EXCHANGE November 23, 1979 With the passing of October, 1979, the epidemic of Great-Crash nostalgia, recently raging abated-somewhato–We wlma' 'couple of recentletters'of the'subject ,and wepromfsi; hereWith that this will be the last such' effort. We could not, hOwever, allow the 50th anniversary of the 1929 market break to pass without one final comment. There have been those seers who have,argued the case for an imminent repetition of 1929. There is, in our view, one simple, and perhaps overriding, argument ,against this particular view. That argument is that, by and large, such a repetition has already taken place. 1300 1200 JONES INDUSTRIAL AVERAGE 1100 1000 CONSTANT 900 BOO 700 600 00 00 ,- 929 11939 199 1.954 1959 1196 iI969 1979 The chart above Shows the history of the Dow-Jones Industrial Average'since 1929, with one simple adjustment. The actual Dow is converted into constant 1972 dollars, using the GNP deflator. The results are, to say the least, interesting. In constant dollars, the Dow, in the period 1929-1932, declined approximately 84. In January, 1966, the Dow, in 1972 dollars, was at approximately 1302. Today, 14 years later, it is, in those terms, at approximately 486. This is a decline of almost 63, which, if not equalling 1929, certainly approaches it. As the chart quite clearly shows, in percentage terms, what has taken place over the past 14 years is far more serious than any past drop, with the single exception of 1929-1932. This process finds the Dow average price for November, 1979, below its adjusted 1974 low and were 1ast seen in early 1954.-The constant-dollar Dow sold Blmost as high as its current figure in 1945 and higher in 1937 and 1940. It presently finds itself at less than half of its 1929 peak. This is pretty gloomy stuff for the ThankSgiving season, but ironically, as market analysts, we find ourselves encouraged. Cycles, such as the one that has covered the past 14 years, do not go on forever, and we think it arguable that the current one may be close to running its course. We have pointed out elsewhere that earnings and dividends on the Dow, even when translated Into constant dollars, have performed much better, especially recently, than the Dow, itself. We expect this ultimately to be reflected in much better performance by the Average. Dow-Jones Industrials (1200 PM) S 81 P Composite (12 00 PM) Cumulative Index (11/21/79) AWTld 811.69 104.46 723.16 ANTHONY W. TABELL DELAFIELD, HARVEY, TAB ELL No statement or exprcsslon of opinion or any other motter herein contained IS, or 15 to be deemed to be, directly or indirectly, on oHer or the 501,cltatlon of on offer 10 buy Of sell any referred to Of menl!oned The molter IS presentud merely for the Cor'lvellencs of the subSCriber While oNe believe the sources of our hnforb' han to be relloble, we m no way represent or guarantee the accuracy thereof nor of the statements mode herem Any action 10 be folen by the subSCriber soul e based on hiS own mveshgallon and Informotton Jonrley Montgomery Scott, Inc, as 0 corporotlon, arld lIs officers or employees, mly now have, or may later tol-e, pOSitions or Irades m respect to any seCUrities mentioned m Ihls or any fulvre 'ssve, and such poslt.on may be different from any views now Of hereafter erpressed m thiS or any other Issve Janney MontgOMery Scott, Inc, which IS registered With the SEC as an Investment adVisor, moy give adVice 10 ItS Investment adVISOry and other customers Independently at any statements mode ,n thiS or In ony other lSr,V!'l FvrlneT mtolmal.on on any secvf\l)' mentioned hexem o\imlable on request