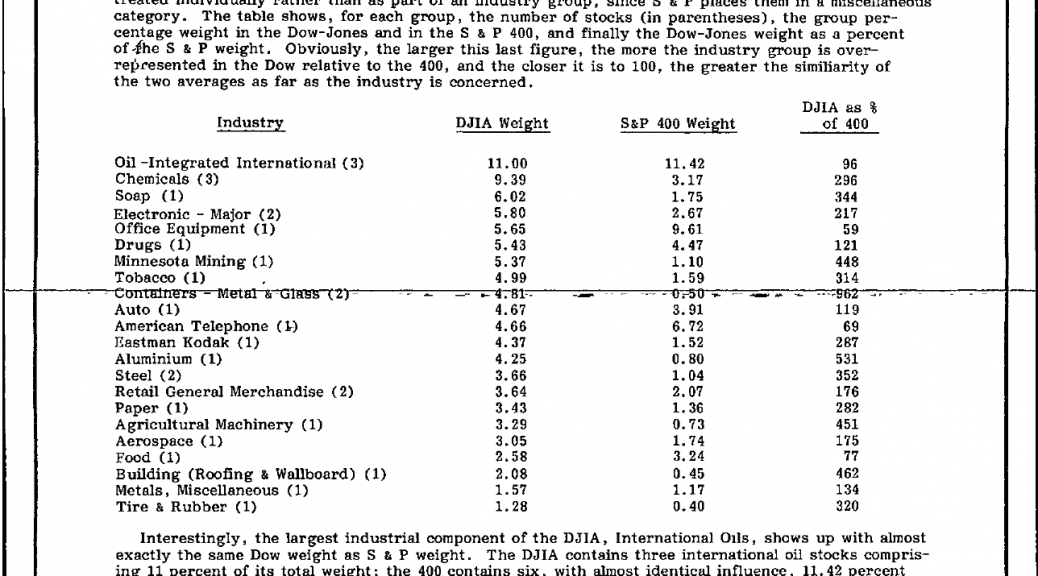 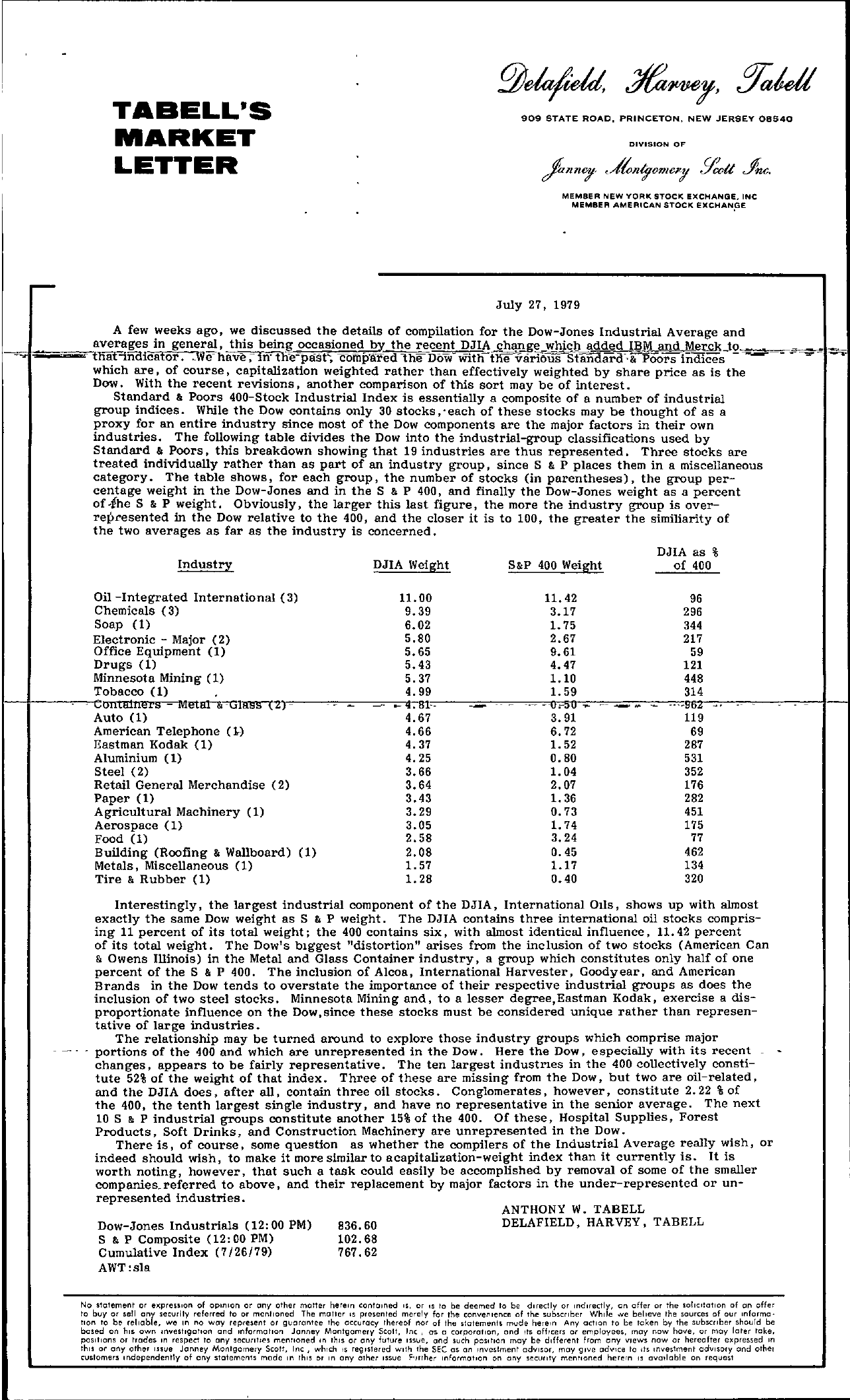 TABELL'S MARKET LETTER 909 STATE ROAC, PRINCETON, NEW JERSEY 08540 DIVISION OF MEMBER NEW VORK STOCK EXCHANGE, INC MEMBER AMERICAN STOCK EXCHANpE July 27, 1979 A few weeks ago, we discussed the details of compilation for the Dow-Jones Industrial Average and averages in general, this being occasioned by the recent DJIA which added IBM and comifared -the Dbw-with Standard-'& -Poors indices — – which are, of course, capitalization weighted rather than effectively weighted by share price as is the Dow. With the recent revisions, another comparison of this sort may be of interest. Standard & Poors 400-Stock Industrial Index is essentially a composite of a number of industrial group indices. While the Dow contains only 30 stocks,'each of these stocks may be thought of as a proxy for an entire industry since most of the Dow components are the major factors in their own industries. The following table divides the Dow into the industrial-group classifications used by Standard & Poors, this breakdown showing that 19 industries are thus represented. Three stocks are treated individually rather than as part of an industry group, since S &; P places them in a miscellaneous category. The table shows, for each group, the number of stocks (in parentheses). the group per- centage weight in the Dow-Jones and in the S &; P 400, and finally the Dow-Jones weight as a percent of ,the S & P weight. Obviously. the larger this last figure, the more the industry group is over- replesented in the Dow relative to the 400, and the closer it is to 100. the greater the similiarity of the two averages as far as the industry is concerned. Industry DJIA Weight S&P 400 Weight DJIA as of 400 Oil -Integrated International (3) Chemicals (3) Soap (1) Electronic – Major (2) Office Equipment (1) Drugs (1) Minnesota Mining (1) Tobacco (1) – …. Auto (1) American Telephone (Ie) Eastman Kodak (1) Aluminium (1) Steel (2) Retail General Merchandise ( 2) Paper (1) Agricultural Machinery ( 1) Aerospace (1) Food (1) Building (Roofing & Wallboard) (1) Metals, Miscellaneous (1) Tire & Rubber (1) 11.00 9.39 6.02 5.80 5.65 5.43 5.37 4.99 4-st 4.67 4.66 4.37 4.25 3.66 3.64 3.43 3.29 3.05 2.58 2.08 1. 57 1. 28 11. 42 96 3.17 296 1. 75 344 2.67 217 9.61 59 -4.47 121 1.10 448 -1. 59 '-0.50 …. 314 …. ''0 3.91 119 6.72 69 1. 52 287 0.80 531 1. 04 352 2.07 176 1. 36 282 0.73 451 1. 74 175 3.24 77 0.45 462 1.17 134 0.40 320 Interestingly, the largest industrial component of the DJIA. International Oils, shows up with almost exactly the same Dow weight as S & P weight, The DJIA contains three international oil stocks compris- ing 11 percent of its total weight; the 400 contains six, with almost identical influence, 11. 42 percent of its total weight. The Dow's biggest distortion arises from the inclusion of two stocks (American Can & Owens Illinois) in the Metal and Glass Container industry, a group which constitutes only half of one percent of the S &; P 400. The inclusion of Alcoa, International Harvester, Goodyear, and American Brands in the Dow tends to overstate the importance of their respective industrial groups as does the inclusion of two steel stocks. Minnesota Mining and, to a lesser degree, Eastman Kodak, exercise a dis- proportionate influence on the Dow.since these stocks must be considered unique rather than represen- tative of large industries. The relationship may be turned around to explore those industry groups which comprise major portions of the 400 and which are unrepresented in the Dow. Here the Dow, especially with its recent changes. appears to be fairly representative. The ten largest industnes in the 400 collectively consti- tute 52 of the weight of that index. Three of these are missing from the Dow. but two are oil-related, and the DJIA does. after all, contain three oil stocks. Conglomerates, however. constitute 2.22 of the 400, the tenth largest single industry. and have no representative in the senior average. The next 10 S & P industrial groups constitute another 15 of the 400. Of these, Hospital Supplies, Forest Products. Soft Drinks, and Construction Machinery are unrepresented in the Dow. There is, of course. some question as whether the compilers of the Industrial Average really wish. or indeed should wish, to make it more similar to acapitalization-weight index than it currently is. It is worth noting, however, that such a task could easily be accomplished by removal of some of the smaller companies referred to above. and their replacement by major factors in the under-represented or un- represented industries. ANTHONY W. TABELL Dow-Jones Industrials (12 00 PM) 836.60 DELAFIELD, HARVEY, TABELL S & P Composite (1200 PM) 102.68 Cumulative Index (7/26/79) 767.62 AWTsla No stotement or expressIon of op'nion or any other molter hereIn contained IS, or IS to be deemed to be directly or ind,rectly, on offer or the sol,CitatIOn of on offer to buy or sell any referred to or menlloned The malter IS presented merely for the conVel'lenCE of the subscrIber While we belIeve the sources of our Informa- tIon 10 be reliable, we In no way represent or guarantee Ihe accuracy Ihereof nor of the stolements mude herem Any octlon to be loken by Ihe subscrIber should be based on h,s awn Invesllgotlan and InformatIon Janney Montgomery Scolt, Inc, as 0 corporatIon, ond Its officers or employees, may now hove, or may later toke, poslilons or trades ,respect to any seCUrltlE'S mentIoned In thIS or any future ISsue, and such POSitIOn may be dIfferent from any Views now or hereafter expressed II' thIS or ony other ISSIJI'l Janney Montgomery Scott, Inc, which IS regIstered WIth the SEC os on Investment adVisor, may gIve adVICe to Its Investment adVisory and olhet cuslomers Independently of ony stotements mode In Ihls or In any olher Issue F,Hther Informallon on ony securIty mentioned hereIn IS ava.lable on request