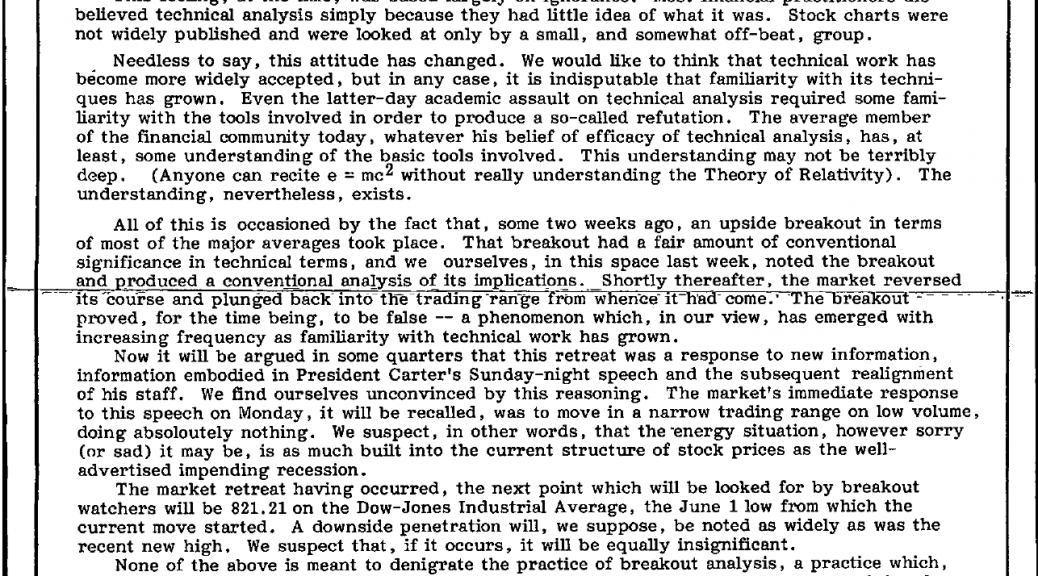 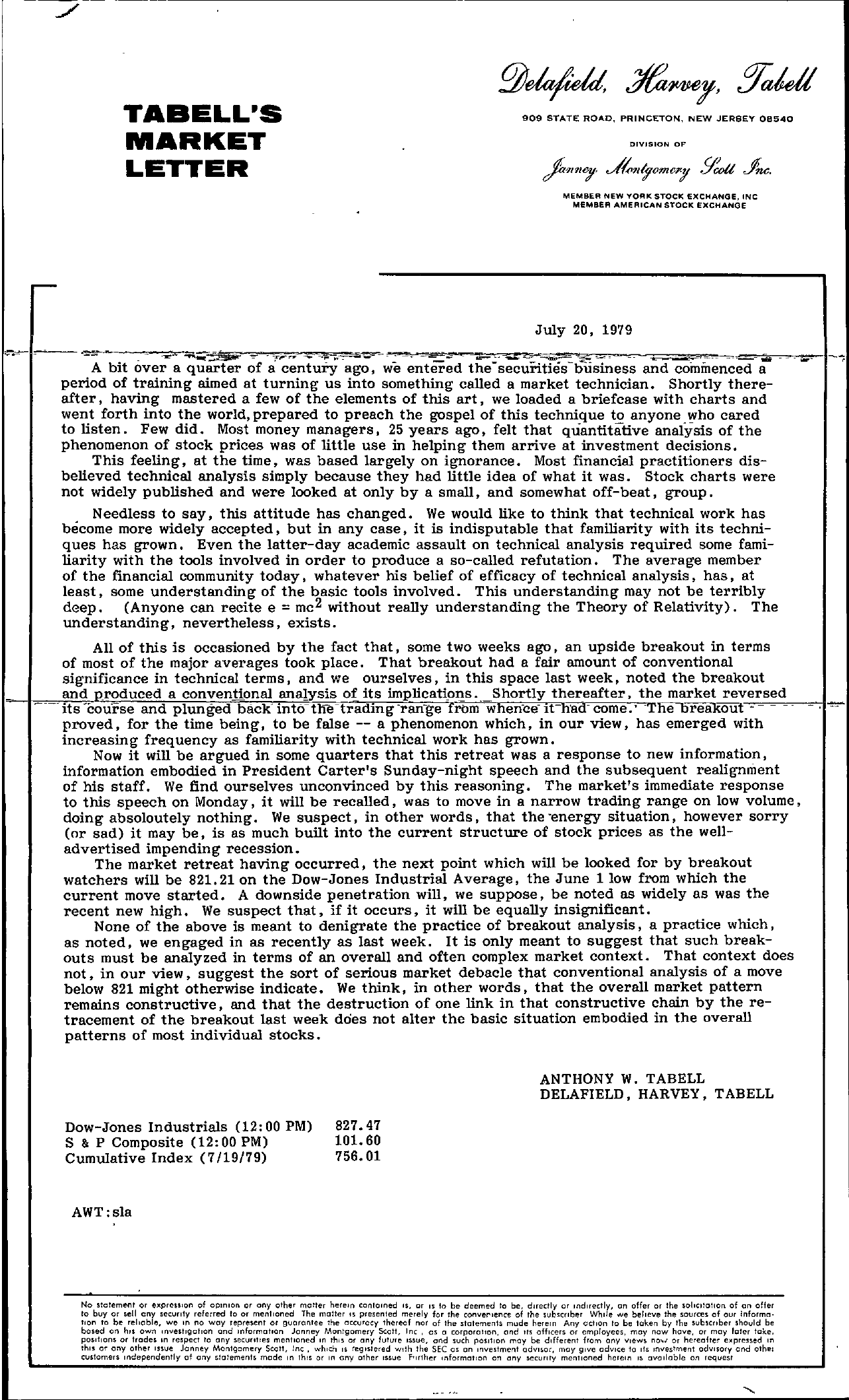 TABELL'S MARKET LETTER 909 STATE ROAD, PRINCETON, NEW JERSEY 08540 DIVISION OF MEMBER NEW VORK STOCK eXCHANoe, INC MEMBER AMERICAN STOCK EXCHANGe July 20, 1979 .. . -…… –;— – – ;;…..,. ——– —- – 0 – '– A bit over a quarter of a century ago, we entered the-secunties-business and coinmenced a period of training aimed at turning us into something called a market technician. Shortly there- after, having mastered a few of the elements of this art, we loaded a briefcase with charts and went forth into the world, prepared to preach the gospel of this technique to anyone who cared to listen. Few did. Most money managers, 25 years ago, felt that quantitative analysis of the phenomenon of stock prices was of little use in helping them arrive at investment decisions. This feeling, at the time, was based largely on ignorance. Most financial practitioners dis- believed technical analysis simply because they had little idea of what it was. Stock charts were not widely published and were looked at only by a small, and somewhat off-beat, group. Needless to say, this attitude has changed. We would like to think that technical work has become more widely accepted, but in any case, it is indisputable that familiarity with its techniques has grown. Even the latter-day academic assault on technical analysis required some familiarity with the tools involved in order to produce a so-called refutation. The average member of the fmancial community today, whatever his belief of efficacy of technical analysis, has, at least, some understanding of the basic tools involved. This understanding may not be terribly deep. (Anyone can recite e mc 2 without really understanding the Theory of Relativity). The understanding, nevertheless, exists. All of this is occasioned by the fact that, some two weeks ago, an upside breakout in terms of most of the major averages took place. That breakout had a fair amount of conventional significance in technical terms, and we ourselves, in this space last week, noted the breakout and a conventional analysis of its implications. Shortly thereafter, the market reversed and plunged into the trading -ran-ge whence-It had come.' proved, for the time being, to be false — a phenomenon which, in our view, has emerged with increasing frequency as familiarity with technical work has grown. Now it will be argued in some quarters that this retreat was a response to new information, information embodied in President Carter's Sunday-night speech and the subsequent realignment of his staff. We find ourselves unconvinced by this reasoning. The market's immediate response to this speech on Monday, it will be recalled, was to move in a narrow trading range on low volume, doing absoloutely nothing. We suspect, in other words, that the energy situation, however sorry (or sad) it may be, is as much built into the current structure of stock prices as the well- advertised impending recession. The market retreat having occurred, the next point which will be looked for by breakout watchers will be 821.21 on the Dow-Jones Industrial Average, the June 1 low from which the current move started. A downside penetration will, we suppose, be noted as widely as was the recent new high. We suspect that, if it occurs, it will be equally insignificant. None of the above is meant to denigrate the practice of breakout analysis, a practice which, as noted, we engaged in as recently as last week. It is only meant to suggest that such break- outs must be analyzed in terms of an overall and often complex market context. That context does not, in our view, suggest the sort of serious market debacle that conventional analysis of a move below 821 might otherwise indicate. We think, in other words, that the overall market pattern remains constructive, and that the destruction of one link in that constructive chain by the re- tracement of the breakout last week does not alter the basic situation embodied in the overall patterns of most individual stocks. Dow-Jones Industrials (12 00 PM) S & P Composite (12 00 PM) Cumulative Index (7/19/79) 827.47 101. 60 756.01 ANTHONY W. TABELL DELAFIELD, HARVEY, TABELL AWTsla No statement or expreSSIon of opinion or ony other motter herem contained IS, or IS to be deemed to be, directly or Indirectly, on offer or Ihe soliCltotlon of on offer to buy or sell ony security referred 10 or mentioned The matter IS presented merely for the convef'lena of the subSCriber While we believe the sources of our Informa- tion to be reliable, we In no way represent or guarantee the accuracy thereof nor af the statemenlS mude hereto Any action to be token by the subscTlber should be based on hiS own mvestlgatlon and mformatlon Janney Montgomery Scali, Inc, as a corporohon, ond Its offICers or employees, moy now have, or may loter toke, positions or trodes In respect to any seCUrities mentioned In thiS or any future Issue, and such position may be dlfferenl from any views no, or hereafter expressed In thiS or ony other lSue Janney Montgomery Scolt, Inc, which IS registered With the SEC as on Investment adVisor, may give adVICe to lIs Investment adVisory and othel customers Independently at any statements mode In thiS or In any other Issue F'Irther tnformatlon on any security mentioned herein IS available on request