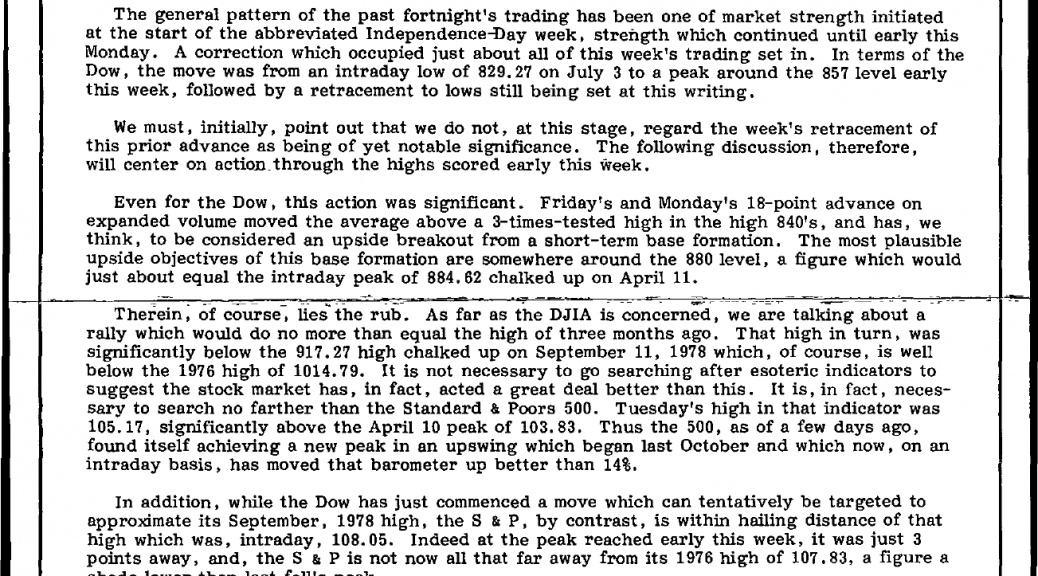 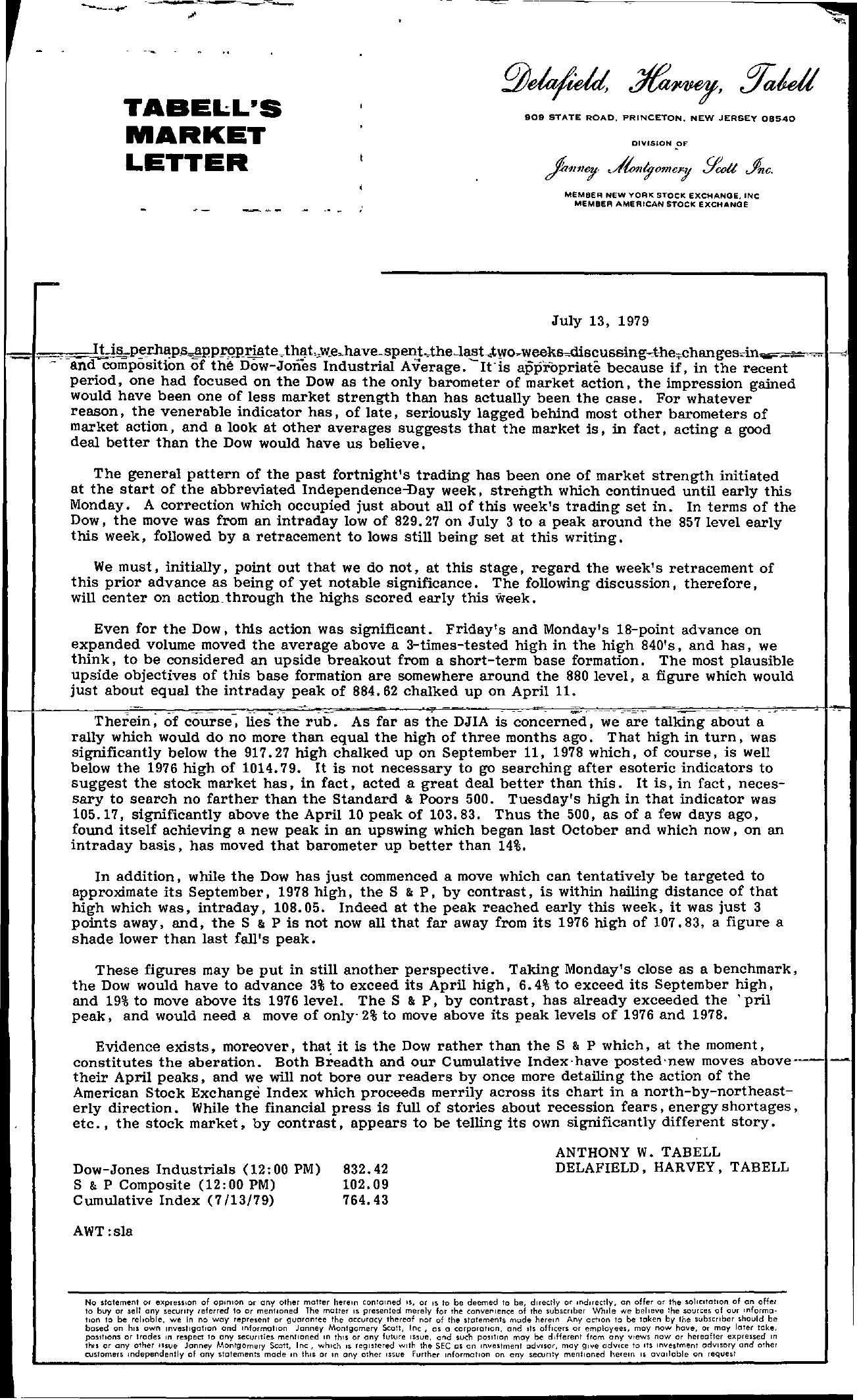 , –…………… – —- TABEl;L'S MARKET LETTER 909 STATE ROAD, PRINCETON. NEW JERSEY 08540 DIVISION 5'F MEMBER NEW VORK STOCK eXCHANGE, INC MEMBER AMERICAN STOCK eXCHANGe – July 13, 1979 It ; thAt wo hoo Qnont tho lOQt t, Ii, -,. 'L.1-, i. and. ofiiiii n JOneS Industrial Average appropriate because if, in the recent penod, one had focused on the Dow as the only barometer of market action, the impression gained would have been one of less market strength than has actually been the case. For whatever reason, the venerable indicator has, of late, seriously lagged behind most other barometers of market action, and a look at other averages suggests that the market is, in fact, acting a good deal better than the Dow would have us believe. The general pattern of the past fortnight's trading has been one of market strength initiated at the start of the abbreviated Independence-Day week, strength which continued until early this Monday. A correction which occupied just about all of this week's trading set in. In terms of the Dow, the move was from an intraday low of 829.27 on July 3 to a peak around the 857 level early this week, followed by a retracement to lows still being set at this writing. We must, initially, point out that we do not, at this stage, regard the week's retracement of this prior advance as being of yet notable significance. The following discussion, therefore, will center on action. through the highs scored early this week. Even for the Dow, this action was significant. Friday's and Monday's 18-point advance on expanded volume moved the average above a 3-times-tested high in the high 840's, and has, we think, to be considered an upside breakout from a short-term base formation. The most plausible upside objectives of this base formation are somewhere around the 880 level, a figure which would just about equal the intraday peak of 884.62 chalked up on April 11. Therein, of course, lies'the rub. As far as the DJIA is concerned, we are talking about a rally which would do no more than equal the high of three months ago. That high in turn, was Significantly below the 917.27 high chalked up on September 11, 1978 which, of course, is well below the 1976 high of 1014.79. It is not necessary to go searching after esoteric indicators to suggest the stock market has, in fact, acted a great deal better than this. It is, in fact, necessary to search no farther than the Standard 80 Poors 500. Tuesday's high in that indicator was 105.17, significantly above the April 10 peak of 103.83. Thus the 500, as of a few days ago, found itself achieving a new peak in an upswing which began last October and which now, on an intraday basis, has moved that barometer up better than 14. In addition, while the Dow has just commenced a move which can tentatively be targeted to approximate its September, 1978 high, the S 80 P, by contrast, is within hailing distance of that high which was, intraday, 108.05. Indeed at the peak reached early this week, it was just 3 points away, and, the S 80 P is not now all that far away from its 1976 high of 107.83, a figure a shade lower than last fall's peak. These figures may be put in still another perspective. Taking Monday's close as a benchmark, the Dow would have to advance 3 to exceed its April high, 6.4 to exceed its September high, and 19 to move above its 1976 level. The S 80 P, by contrast, has already exceeded the . pril peak, and would need a move of only' 2 to move above its peak levels of 1976 and 1978. Evidence exists, moreover, that it is the Dow rather than the S 80 P which, at the moment, constitutes the aberation. Both Breadth and our Cumulative Indexhave posted'new moves above—l–I their April peaks, and we will not bore our readers by once more detailing the action of the American Stock Exchange Index which proceeds merrily across its chart in a north-by-northeasterly direction. While the financial press is full of stories about recession fears, energy shortages, etc., the stock market, by contrast, appears to be telling its own significantly different story. Dow-Jones Industrials (12 00 PM) 832.42 S & P Composite (12 00 PM) 102.09 Cumulative Index (7/13/79) 764.43 ANTHONY W. TAB ELL DELAFIELD, HARVEY, TABELL AWTsla No statement or expressIon of opInion or cny olner motter herein contolned IS, or IS 10 be deemed 10 be, directly or mdlrectly, on offer or the soliCitation of on offer to buy or sel! cny security referred 10 or mentIOned The motter IS presened merely for the converlenc;E of the While we believe the sources of our Informa- lion to be reliable, we In no way represent or guarantee the acwracy thereof nor of the statements mude herein Any action to be token by the subSCriber should be based on hiS own investigation and information Janney Montgomery SCali, Inc, as a corporation, and Its officers or employees, may now hove, or may later lake, positions or trodes In respect to any 5ecurllics mentioned In thiS or any future Issue, and such position may be different from any views now or hereafter expressed In thl or any other ilsue Janney Montgomery Scott, Inc, which IS registered With Ihe SEC as on Investment adVisor, may give adVice to Its Investment adVisory and other customers Independently of any statements mode In thiS or In any other Issue Further Information on any security mentioned nereln 1 available on request