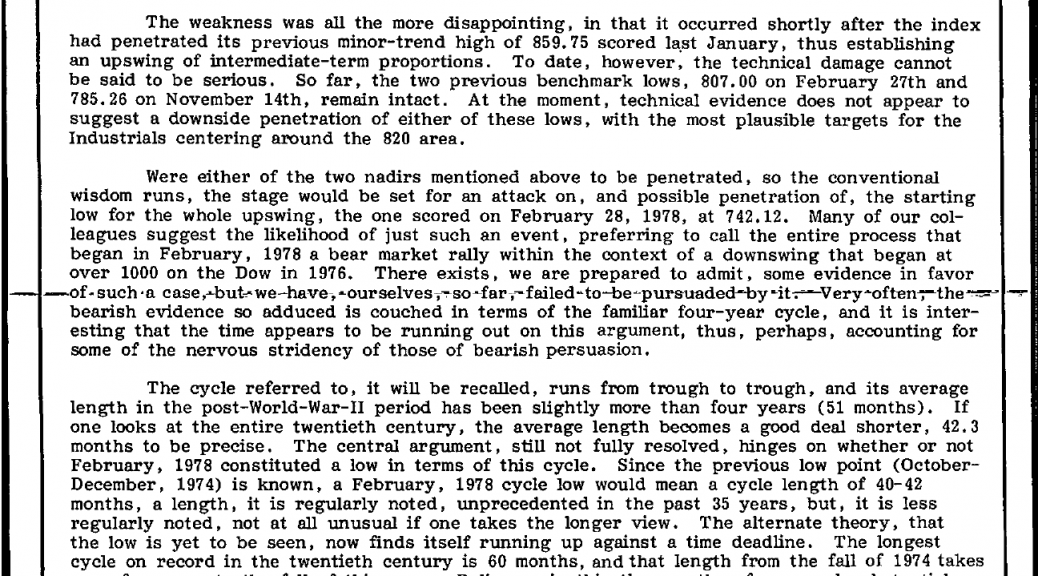 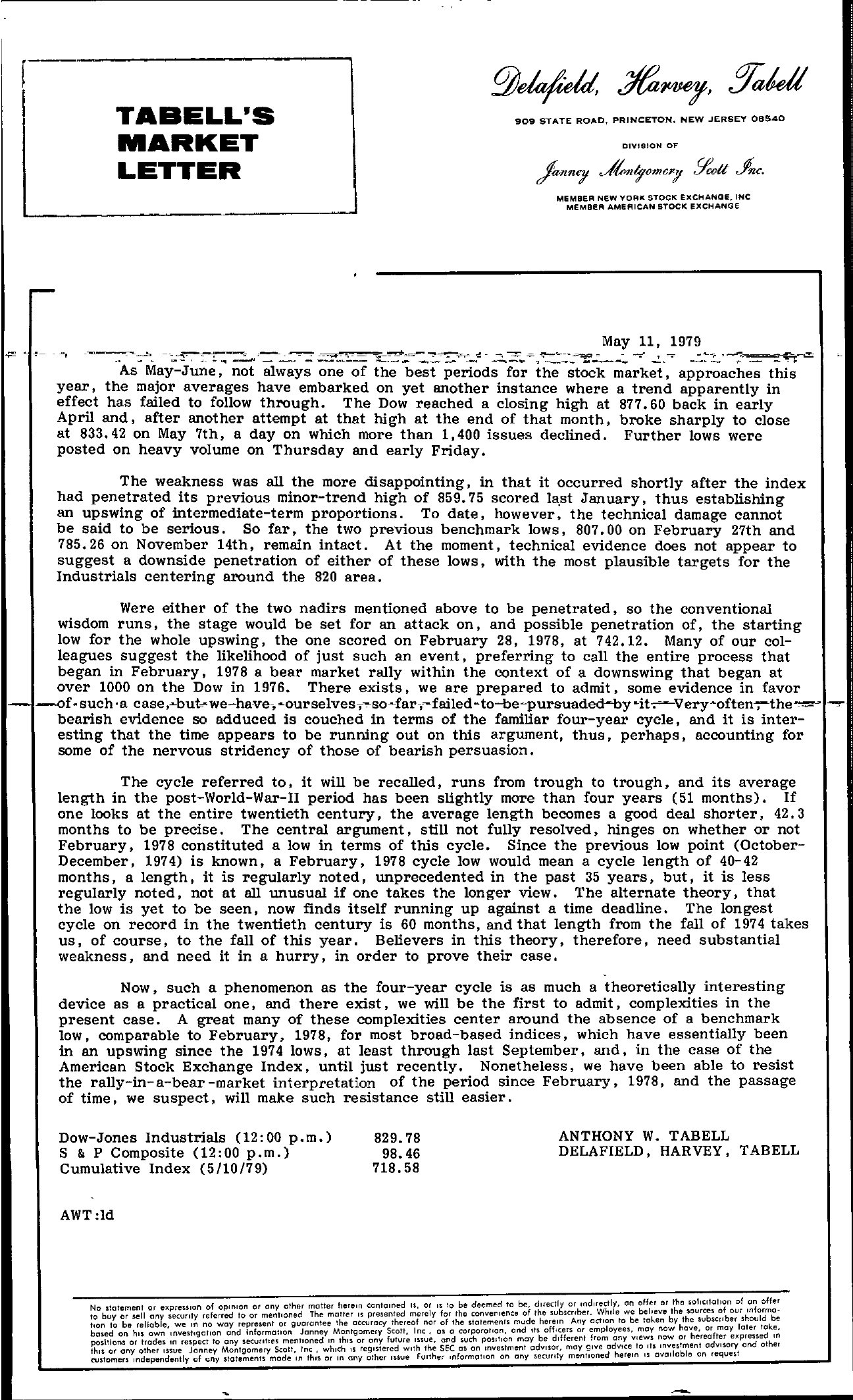 – – – – – – – – – – – – – – – – – – – – – – – — —- r TABELL'S MARKET LETTER 909 STATE ROAD, PRINCETON, NEW JERSEY OB540 DIVISION OF MEMBER NEW YORK STOCK eXCHANGe. INC MEMBER AMERICAN STOCI( EXCHANGE May 11, 1979 -h!', … … ….—…… -.!.,-oo '-!..—- As May-June, not always one of the best periods for the stock market, approaches this year, the major averages have embarked on yet another instance where a trend apparently in effect has failed to follow through. The Dow reached a closing high at 877.60 back in early April and, after another attempt at that high at the end of that month, broke sharply to close at 833.42 on May 7th, a day on which more than 1,400 issues declined. Further lows were posted on heavy volume on Thursday and early Friday. The weakness was all the more disappointing, in that it occurred shortly after the index had penetrated its previous minor-trend high of 859.75 scored ll\st January, thus establishing an upswing of intermediate-term proportions. To date, however, the technical damage cannot be said to be serious. So far, the two previous benchmark lows, 807.00 on February 27th and 785.26 on November 14th, remain intact. At the moment, technical evidence does not appear to suggest a downside penetration of either of these lows, with the most plausible targets for the Industrials centering around the 820 area. Were either of the two nadirs mentioned above to be penetrated, so the conventional wisdom runs, the stage would be set for an attack on, and possible penetration of, the starting low for the whole upswing, the one scored on February 28, 1978, at 742.12. Many of our col- leagues suggest the likelihood of just such an event, preferring to call the entire process that began in February, 1978 a bear market rally within the context of a downswing that began at over 1000 on the Dow in 1976. There exists, we are prepared to admit, some evidence in favor – -of sucha case we-have-, failed — bearish evidence so adduced is couched in terms of the familiar four-year cycle, and it is inter- esting that the time appears to be running out on this argument, thus, perhaps, accounting for some of the nervous stridency of those of bearish persuasion. The cycle referred to, it will be recalled, runs from trough to trough, and its average length in the post-World-War-II period has been slightly more than four years (51 months). If one looks at the entire twentieth century, the average length becomes a good deal shorter, 42.3 months to be precise. The central argument, still not fully resolved, hinges on whether or not February, 1978 constituted a low in terms of this cycle. Since the previous low point (OctoberDecember, 1974) is known, a February, 1978 cycle low would mean a cycle length of 40-42 months, a length, it is regularly noted, unprecedented in the past 35 years, but, it is less regularly noted, not at all unusual if one takes the longer view. The alternate theory, that the low is yet to be seen, now finds itself running up against a time deadline. The longest cycle on record in the twentieth century is 60 months, and that length from the fall of 1974 takes us, of course, to the fall of this year. Believers in this theory, therefore, need substantial weakness, and need it in a hurry, in order to prove their case. Now, such a phenomenon as the four-year cycle is as much a theoretically interesting device as a practical one, and there exist, we will be the first to admit, complexities in the present case. A great many of these complexities center around the absence of a benchmark low, comparable to February, 1978, for most broad-based indices, which have essentially been in an upswing since the 1974 lows, at least through last September, and, in the case of the American Stock Exchange Index, until just recently. Nonetheless, we have been able to resist the rally-in-a-bear -market interpretation of the period since February, 1978, and the passage of time, we suspect, will make such resistance still easier. Dow-Jones Industrials (12 00 p. m.) S & P Composite (1200 p.m.) Cumulative Index (5/10179) 829.78 98.46 718.58 ANTHONY W. T ABELL DELAFIELD, HARVEY, TABELL AWTld No statement or expression of opinion or any other matter here'n contOlned Il, or IS 10 be deemed to be, directly or Indirectly, on offer or the soliCitation of of offer hI' Idb'to buy or sell ony security referred 10 or mentioned The motter IS presented merely for the COfWel'lenCI9 of the han to be reliable we In no way represent or guoronlee the accuracy thereof nor of Ihe statements m….de herein While we believe Any action to be toh.en y t heousurbssconfbeoru,rs t au t k e based on hiS own'lnvestlgotlon positions or trades In respect to and Information Janney Montgomery ony securlhes menllaned In thiS or ony Scott, future Inc, as a Issue, and corporation, and Its offtcers or such pOSition may be different employees, may from any views now now ohrOhee,reoarf/meray a er 19, thin Ih,s or any olher Issue Janney Montgomery cott, Inc, whICh IS reglslered With Ihe SEC as on Investment adVisor, may give adVice to It Investment a VISOryt on a 191 customers Independently of any statements mode In Hus or In any other Issue Further Information on any seo,lIIly mentioned herein IS available on reques