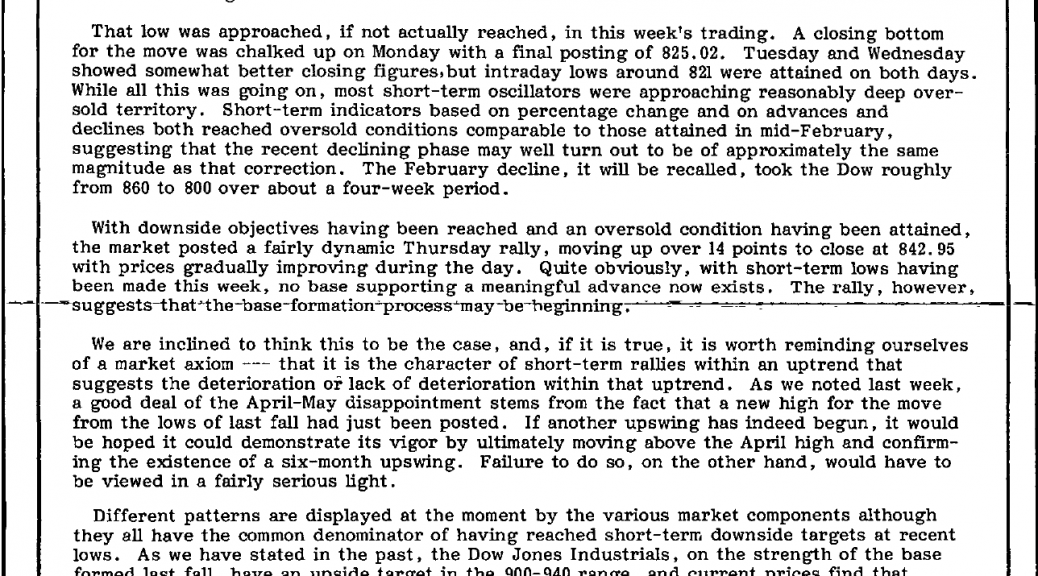 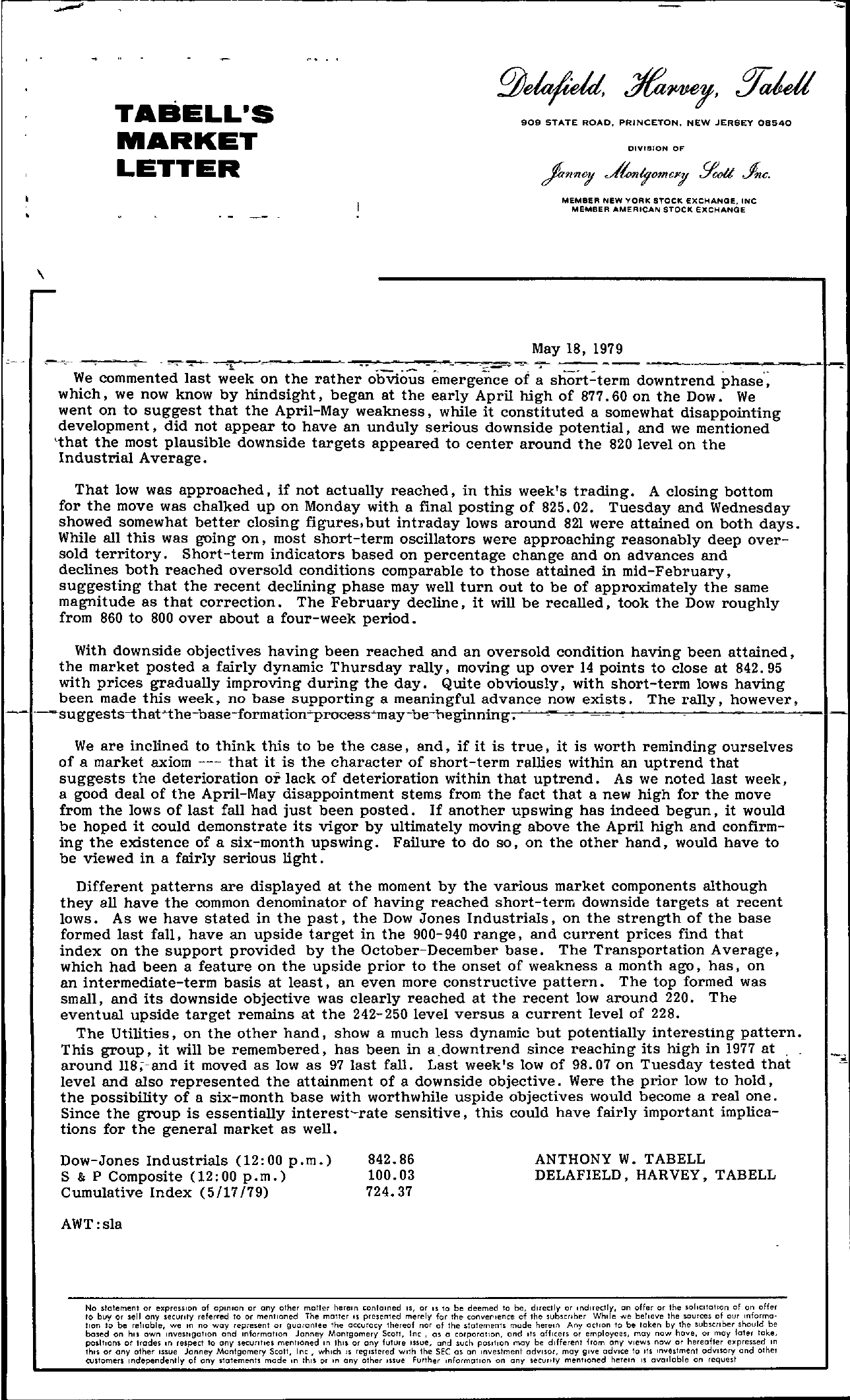 TABELL'S MARKET LETTER 909 STATE ROAD, PRINCETON, NEW JERSEY 08540 DIVISION OF MEMBER NEW VORk STOCk EXCHANGE, INC MEMBER AMERICAN STOCI( eXCHANGE -\ May 18, 1979 – – commented on the rather obviOus downtrend phase'; which, we now know by hindsight, began at the early April high of 877.60 on the Dow. We went on to suggest that the April-May weakness, while it constituted a somewhat disappointing development, did not appear to have an unduly serious downside potential, and we mentioned 'that the most plausible downside targets appeared to center around the 820 level on the Industrial Average. That low was approached, if not actually reached, in this week's trading. A closing bottom for the move was chalked up on Monday with a final posting of 825.02. Tuesday and Wednesday showed somewhat better closing figures, but intraday lows around 821 were attained on both days. While all this was going on, most short-term oscillators were approaching reasonably deep oversold territory. Short-term indicators based on percentage change and on advances and declines both reached oversold conditions comparable to those attained in mid-February, suggesting that the recent declining phase may well turn out to be of approximately the same magnitude as that correction. The February decline, it will be recalled, took the Dow roughly from 860 to 800 over about a four-week period. With downside objectives having been reached and an oversold condition having been attained, the market posted a fairly dynamic Thursday rally, moving up over 14 points to close at 842.95 with prices gradually improving during the day. Quite obviously, with short-term lows having been made this week, no base supporting a meaningful advance now exists. The rally, however, — We are inclined to think this to be the case, and, if it is true, it is worth reminding ourselves of a market axiom — that it is the character of short-term rallies within an uptrend that suggests the deterioration or lack of deterioration within that uptrend. As we noted last week, a good deal of the April-May disappointment stems from the fact that a new high for the move from the lows of last fall had just been posted. If another upswing has indeed begun, it would be hoped it could demonstrate its vigor by ultimately moving above the April high and confirming the existence of a six-month upswing. Failure to do so, on the other hand, would have to be viewed in a fairly serious light. Different patterns are displayed at the moment by the various market components although they all have the common denominator of having reached short-term downside targets at recent lows. As we have stated in the past, the Dow Jones Industrials, on the strength of the base formed last fall, have an upside target in the 900-940 range, and current prices find that index on the support provided by the October-December base. The Transportation Average, which had been a feature on the upside prior to the onset of weakness a month ago, has, on an intermediate-term basis at least, an even more constructive pattern. The top formed was small, and its downside objective was clearly reached at the recent low around 220. The eventual upside target remains at the 242-250 level versus a current level of 228. The Utilities, on the other hand, show a much less dynamic but potentially interesting pattern. This group, it will be remembered, has been in adowntrend since reaching its high in 1977 at , around 118;-and it moved as low as 97 last fall. Last week's low of 98.07 on Tuesday tested that level and also represented the attainment of a downside objective. Were the prior low to hold, the possibility of a six-month base with worthwhile uspide objectives would become a real one. Since the group is essentially interest-rate sensitive, this could have fairly important implications for the general market as well. Dow-Jones Industrials (12 00 p. m.) S & P Composite (1200 p.m.) Cumulative Index (5/17179) 842.86 100.03 724.37 ANTHONY W. TABELL DELAFIELD, HARVEY, TABELL AWTsla No statemenf or expression of opinion or any olher motter herein contolned IS, or IS 10 be deemed 10 be, directly or 'ndHcc!ty, on offer or the 501llollon of on offer to buy or sell any security referred to or mentioned The maller IS presented merely for Ihe converolcnce of the subscriber While we believe the sources of our Informotlon to be reliable, we In no way represent or guarantee the occurocy thereof nor of the stotements mude herein Any aeilon to be token by the subscriber should be based on hiS own investigation and information Janney Montgomery Scoll, Inc, as a corporotlon, and ItS officers or employees, may now have, or may later toke, paslhons or trades In respect to any securlhes mentioned In 11'115 or any future Issue, and such position may be different from any views now or hereafter e)rpressed In thiS or any other IHue Janney Montgomery Scott, Inc. whICh IS registered With the SEC as on Investment adVisor, may give adVice to Its ,vestment adVisory and othel customers Independently of any statements mode In thiS or In any other Issue Further ,formatIOn on ony serunty mentioned herein IS available on request