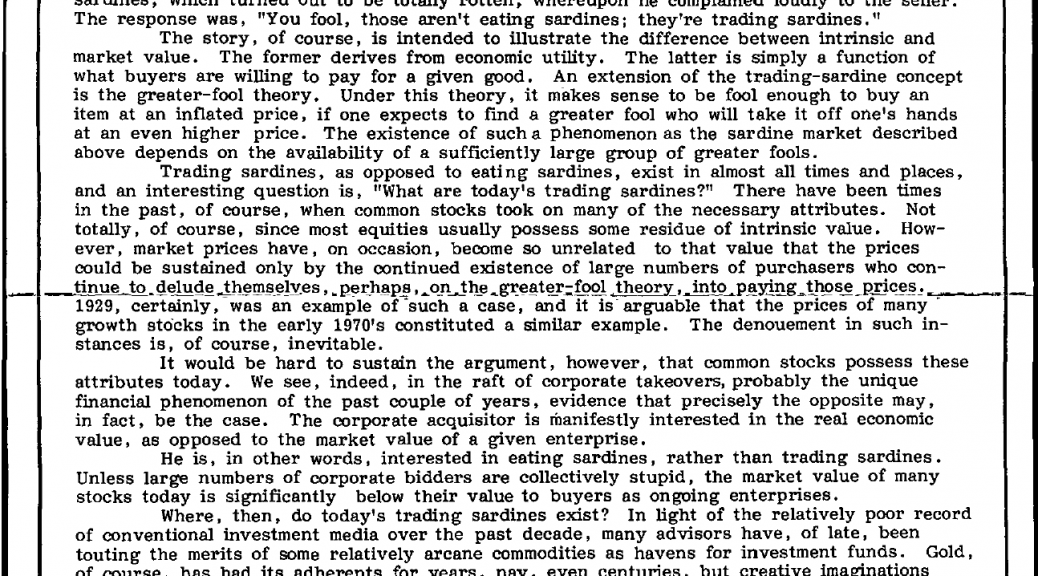 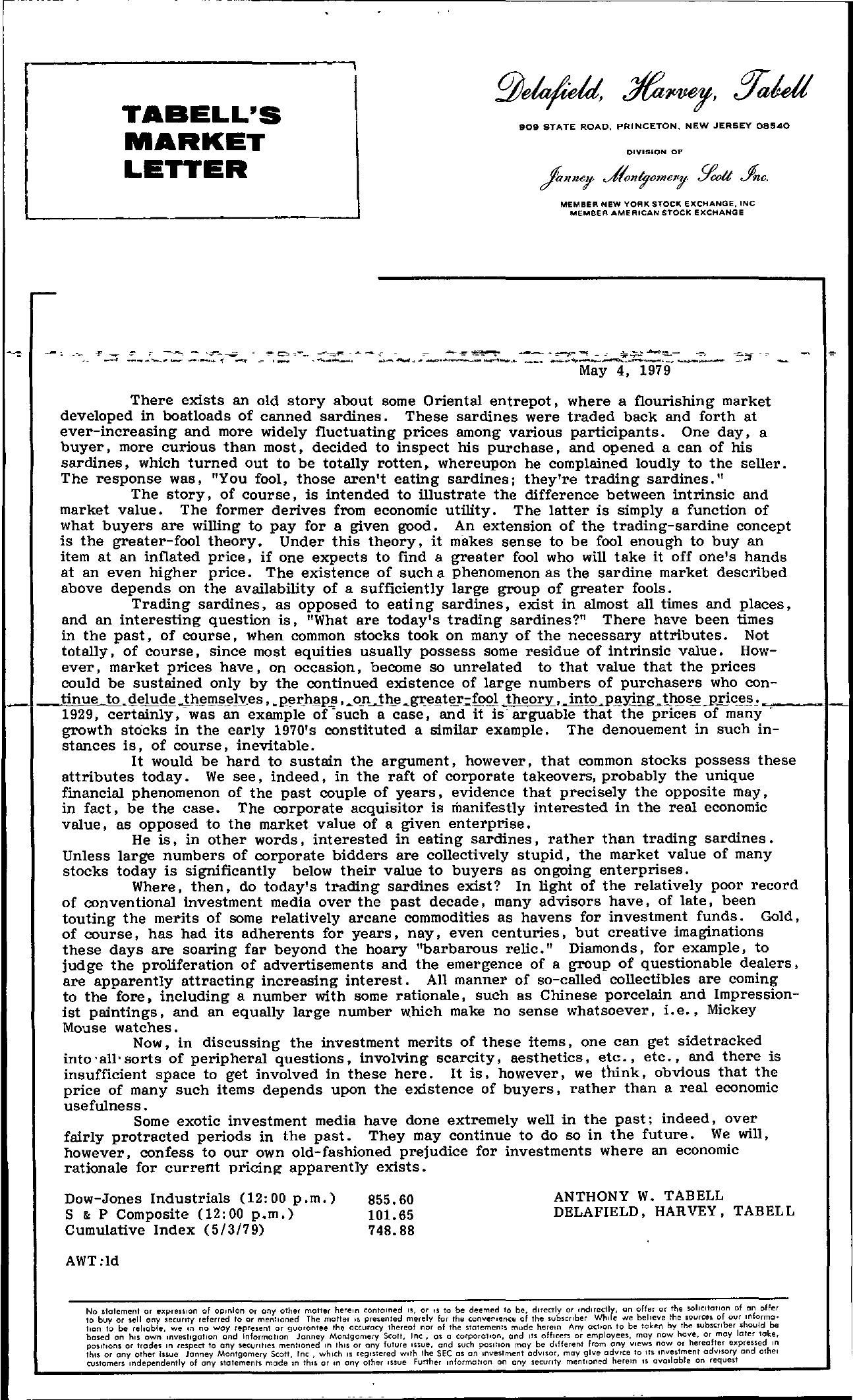 I TABELL'S MARKET LETTER 909 STATE ROAD, PRINCETON, NEW JERSEY 08540 DIVISION OF MEMBER NEW YORK STOCK eXCHANGE, INC MEMBER AMERICAN STOCK eXCHANGE – — …..-.. –, ..-. ………. '1 – .- , – -,,–;;;-.,..,. .-, ' – – , ……… …. 4 …- ,……. , May 4, 1979 There exists an old story about some Oriental entrepot, where a flourishing market developed in boatloads of canned sardines. These sardines were traded back and forth at ever-increasing and more widely fluctuating prices among various participants. One day, a buyer, more curious than most, decided to inspect his purchase, and opened a can of his sardines, which turned out to be totally rotten, whereupon he complained loudly to the seller. The response was, You fool, those aren't eating sardines; they're trading sardines. The story, of course, is intended to illustrate the difference between intrinsic and market value. The former derives from economic utility. The latter is simply a function of what buyers are willing to pay for a given good. An extension of the trading-sardine concept is the greater-fool theory. Under this theory, it makes sense to be fool enough to buy an item at an inflated price, if one expects to find a greater fool who will take it off one's hands at an even higher price. The existence of such a phenomenon as the sardine market described above depends on the availability of a sufficiently large group of greater fools. Trading sardines, as opposed to eating sardines, exist in almost all times and places, and an interesting question is, What are today's trading sardines There have been times in the past, of course, when common stocks took on many of the necessary attributes. Not totally, of course, since most equities usually possess some residue of intrinsic value. How- ever, market prices have, on occasion, become so unrelated to that value that the prices could be sustsined only by the continued existence of large numbers of purchasers who con- tinue to.gelugEl,.tlWll!l!lIXes, theory, …,.. 1 1929, certsinly, was an example or-such a case, and it is arguable that the prices of many growth stocks in the early 1970's constituted a similar example. The denouement in such in- stances is, of course, inevitable. It would be hard to sustsin the argument, however, that common stocks possess these attributes today. We see, indeed, in the raft of corporate takeovers, probably the unique financial phenomenon of the past couple of years, evidence that precisely the opposite may, in fact, be the case. The corporate acquisitor is manifestly interested in the real economic value, as opposed to the market value of a given enterprise. He is, in other words, interested in eating sardines, rather than trading sardines. Unless large numbers of corporate bidders are collectively stupid, the market value of many stocks today is significantly belOW their value to buyers as ongoing enterprises. Where, then, do today's trading sardines exist In light of the relatively poor record of conventional investment media over the past decade, many advisors have, of late, been touting the merits of some relatively arcane commodities as havens for investment funds. Gold, of course, has had its adherents for years, nay, even centuries, but creative imaginations these days are soaring far beyond the hoary barbarous relic. Diamonds, for example, to judge the proliferation of advertisements and the emergence of a group of questionable dealers, are apparently attracting increasing interest. All manner of so-called collectibles are coming to the fore, including a number with some rationale, such as Chinese porcelsin and Impression- ist psintings, and an equally large number w.hich make no sense whatsoever, i.e., Mickey Mouse watches. Now, in discussing the investment merits of these items, one can get sidetracked into' all' sorts of peripheral questions, involving scarcity, aesthetics, etc., etc., and there is insufficient space to get involved in these here. It is, however, we think, obvious that the price of many such items depends upon the existence of buyers, rather than a real economic usefulness. Some exotic investment media have done extremely well in the past; indeed, over fsirly protracted periods in the past. They may continue to do so in the future. We will, however, confess to our own old-fashioned prejudice for investments where an economic rationale for current pricing apparently exists. Dow-Jones Industrials (12 00 p.m.) S & P Composite (1200 p.m.) Cumulative Index (5/3/79) 855.60 101.65 748.88 ANTHONY W. TAB ELL DELAFIELD, HARVEY, TABELL AWT ld No statement or expreulon of opinion or any olher moiler herein contolned IS, or IS fa be deemed 10 be, directly or mdlrectly. on offer Of the solicitation of on offer 10 buy or sell any security referred to or mentIoned The moiler IS presented merely for the convePlenC!l of the subscrIber While we believe the sources of our Informo tlon to be rehoble, we In no woy represent or guarantee the accuracy thereof nor of the statements m..,de herein Any actIon to be token by the subSCriber shOUld be based on hIS own investigatIon and Information Janney Montgomery Scali, Inc, as a corporatIon, and Its offIcers or employees, may now hove, or may later toke, poslteon! or trades In respect 10 any secuntles mentioned In thIS or any future Issue, ond such posItIon moy be dIfferent from any views now or hereafter expressed In th'5 or any other Issue Janney Montgomery Scott, Inc, which 15 registered wl,h the SEC as on Investment adVIsor, may give adVICe 10 liS Investment adVISOry and othel customers Independently of any statements made 10 th.s or In any other .uue Further tnformatlon on any secunty mentioned hereIn IS avalloble on request