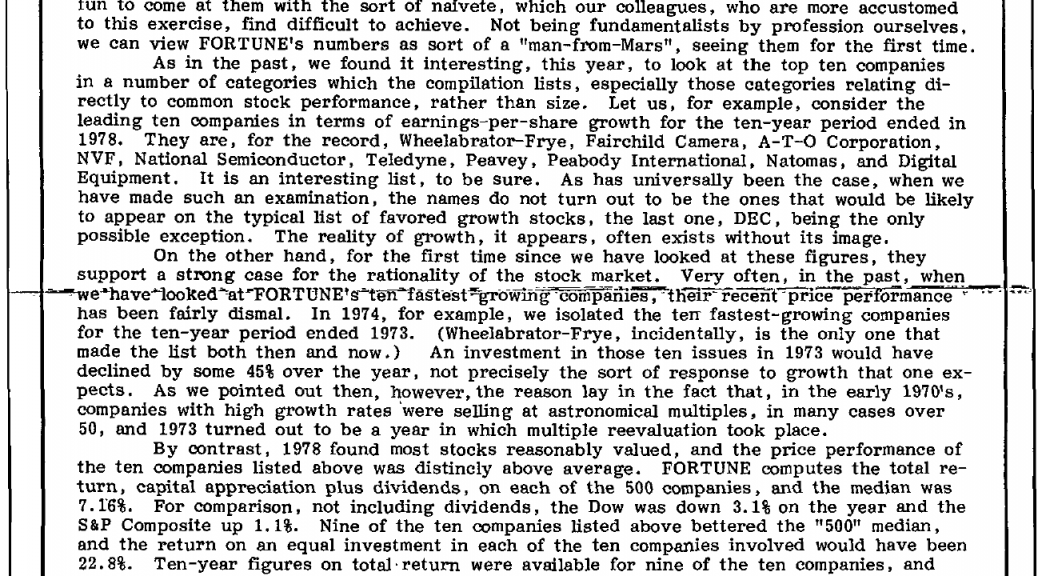 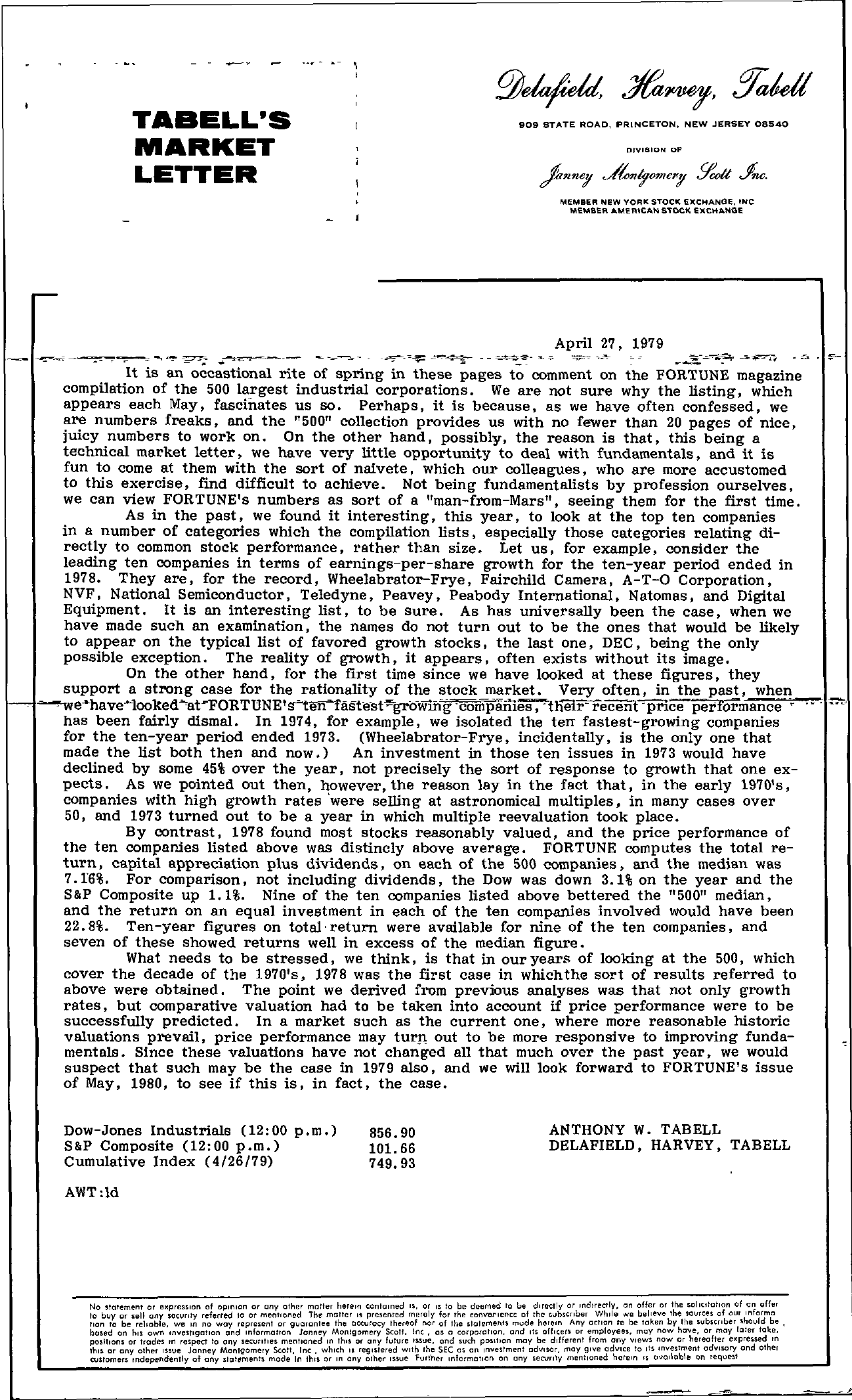 TABELL'S MARKET LETTER 909 STATE ROAD, PRINCETON, NEW JERSEY 08540 DIVISION OF MEMBER New VORl( STOel( EXCHANGe, INC AMER\CAN STOCK EXCHANGE April 27, 1979 -. -,! —; …-. -h… —– – — It is an occastional rite of spring in these pages to comment on the FORTUNE magazine compilation of the 500 largest industrial corporations. We are not sure why the listing, which appears each May, fascinates us so. Perhaps, it is because, as we have often confessed, we are numbers freaks, and the 500 collection provides us with no fewer than 20 pages of nice, juicy numbers to work on. On the other hand, possibly, the reason is that, this being a technical market letter, we have very little opportunity to deal with fundamentals, and it is fun to come at them with the sort of naivete, Which our COlleagues, who are more accustomed to this exercise, find difficult to achieve. Not being fundamentalists by profession ourselves. we can view FORTUNE's numbers as sort of a man-from-Mars, seeing them for the first time. As in the past, we found it interesting, this year, to look at the top ten companies in a number of categories which the compilation lists, especially those categories relating di- rectly to common stock performance, rather than size. Let us, for example, consider the leading ten companies in terms of earnings-per-share growth for the ten-year period ended in 1978. They are, for the record, Wheelabrator-Frye, Fairchild Camera, A-T-O Corporation, NVF, National Semiconductor, Teledyne, Peavey, Peabody International, Natomas, and Digital Equipment. It is an interesting list, to be sure. As has universally been the case, when we have made such an examination, the names do not turn out to be the ones that would be likely to appear on the typical list of favored growth stocks, the last one, DEC, being the only possible exception. The reality of growth, it appears, often exists without its image. On the other hand, for the first time since we have looked at these figures, they support a strong case for the rationality of the stock market. Very often, in the past, when -companies, -theirrecent -price pel'IoFmance .. – , has been fairly dismal. In 1974, for example, we isolated the terr fastest-growing companies for the ten-year period ended 1973. (Wheelabrator-Frye, incidentally, is the only one that made the list both then and now.) An investment in those ten issues in 1973 would have declined by some 45 over the year, not precisely the sort of response to growth that one ex- pects. As we pointed out then, however, the reason lay in the fact that, in the early 1970's, companies with high growth rates 'were selling at astronomical multiples, in many cases over 50, and 1973 turned out to be a year in which multiple reevaluation took place. By contrast, 1978 found most stocks reasonably valued, and the price performance of the ten companies listed above was distincly above average. FORTUNE computes the total re- turn, capital appreciation plus dividends, on each of the 500 companies, and the median was 7.16. For comparison, not including dividends, the Dow was down 3.1 on the year and the S&P Composite up 1. 1. Nine of the ten companies listed above bettered the 500 median, and the return on an equal investment in each of the ten companies involved would have been 22.8. Ten-year figures on total- return were available for nine of the ten companies, and seven of these showed returns well in excess of the median figure. What needs to be stressed, we think, is that in our years of looking at the 500, which cover the decade of the 1970's, 1978 was the first case in which the sort of results referred to above were obtained. The point we derived from previous analyses was that not only growth rates, but comparative valuation had to be taken into account if price performance were to be successfully predicted. In a market such as the current one, where more reasonable historic valuations prevail, price performance may turll out to be more responsive to improving funda- mentals. Since these valuations have not changed all that much over the past year, we would suspect that such may be the case in 1979 also, and we will look forward to FORTUNE's issue of May, 1980, to see if this is, in fact, the case. Dow-Jones Industrials (12 00 p. m.) S&P Composite (1200 p.m.) Cumulative Index (4/26/79) AWTld 856.90 101. 66 749.93 ANTHONY W. TAB ELL DELAFIELD, HARVEY, TABELL I No stalement or expression of opmlon or any other motter herein contolned IS, or IS to be deemed to be dlrcCTly or indireCTly, on oHer or thc soliCitation of on offer to buy or sell ony SCCl,mly referred to or mentioned The motler IS presented merely for the corlVellence of Ihc subSCriber Whda we. believe the sources of our Informo tlon to be rehoble, we In no way represent or guarantee the occuracy thereof nor of the statements mude herein Any action fo be token by the subscnber should be based on hiS own investigation and information Janney Montgomery &011, Inc, as 0 corporation, and lIS officers or employees, may now have, or moy later tak.e, posItions or trades In respect to any seCUrities menlloned In thiS or any future Inue, and such position may be different from any views now or hereafter expressed In or any other Issue Jonney Montgomery &ott, Inc, which IS re.glstered With the SEC os on Investment adVisor, may give adVice to Its Investment adVISOry and othel customers rndependenlly of ony stolements mode In thiS or In any other ISSUI! further InformatiOn on any security mentIOned hercln IS ovallable on requl!!'1